This BMW café racer is not only a fine product from a Melbourne-based custom team, it’s also their first.

To make a mark in the crowded custom bike scene, you need to stand out. For some, it’s through design themes or signature features. Others focus on a particular make or model. And then there’s builders like Jas Babalija and Dom Scarpari from JAX Garage, who let the quality of their work serve as their calling card. 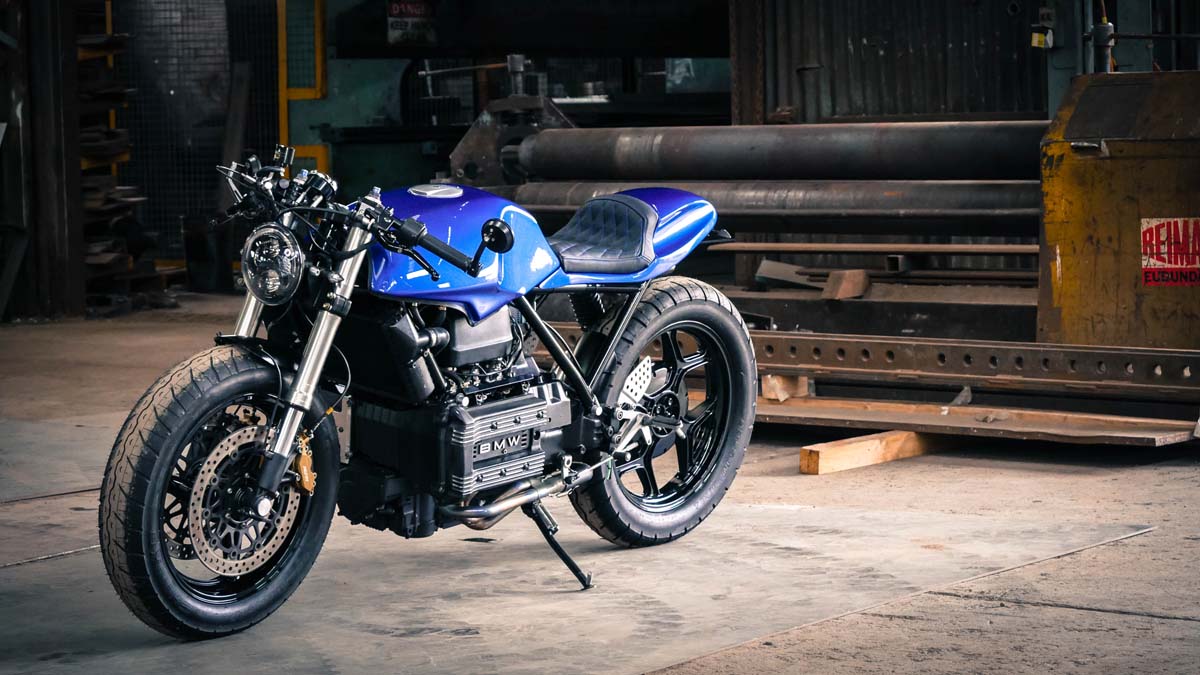 Jas, who had previously worked for a forensic engineering company, established JAX Garage with his father-in-law Dom in early 2019, offering vehicle accreditation services and fabrication work, with custom bike building initially envisioned as a bit of a sideline.

Now, more than three years later, JAX Garage is still accrediting vehicle modifications and offering fabrication services, but the custom bike side of things has grown beyond all expectations. Even though building and modifying motorcycles now takes up much more time than originally anticipated, Jas says he’s loving it.

“Working on custom bikes is the creative outlet I have,” Jas explained. 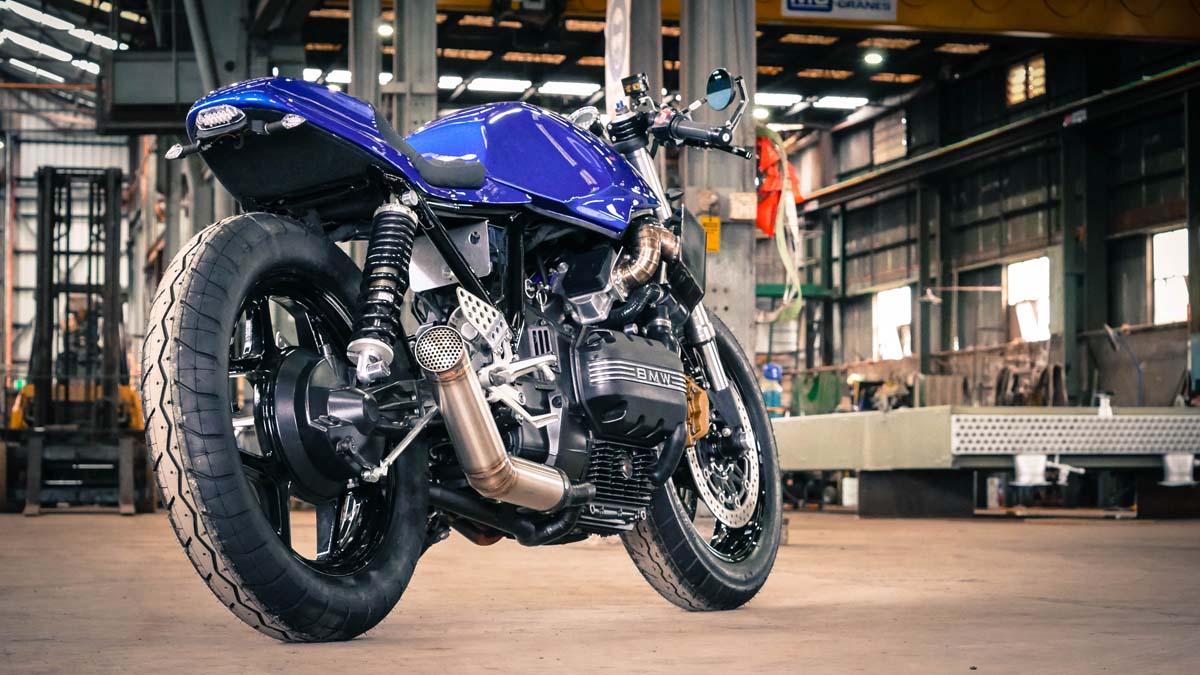 Before the foundation of JAX Garage, the custom bikes Jas built were either his own, or projects for mates. But through his girlfriend (and now wife) Christina, he was introduced to Dom, who had also modified and built his own customs in the past. From there, the idea to turn their respective hobbies into a business was born.

The first product of Jas and Dom’s collaboration - under the banner of JAX Garage - is the bike you see here.

Plenty of BMW boxer twins have been given the custom treatment over the years, including units previously featured with JUST BIKES. BMW’s K Series is far less common as a base for custom builds, though, with few built to aesthetic appeal. That makes what JAX Garage have achieved with this example all the more impressive.

Going for a K Series as the first showcase for JAX Garage was a bold move, as an SR400, Triumph Bonnie or BMW R Series would have been a much safer choice. 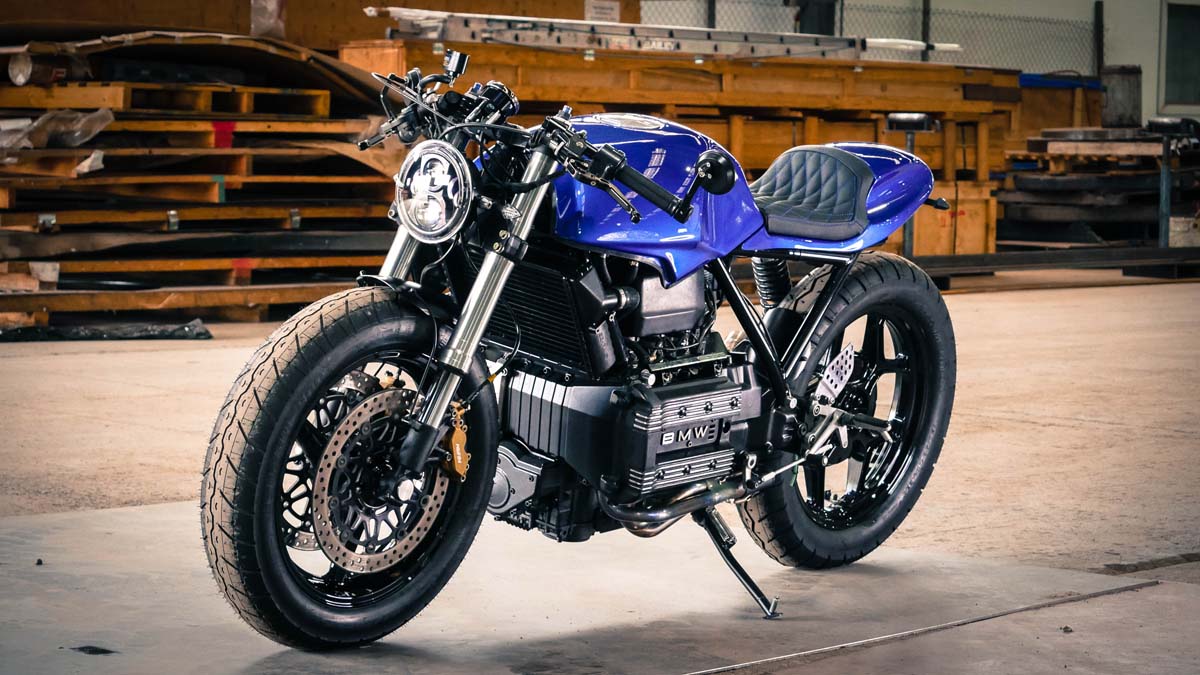 “I like the rarity,” Jas explained. “The K75C is also a solid platform to build a custom café racer as it allows for good manipulation and performance.”

Neither Jas nor Dom has any particular affection for the K Series (a Ducati Monster was Jas’s first bike), but when this 1986 K75C came up for sale through a bike wrecker in Melbourne, it ticked a lot of boxes. 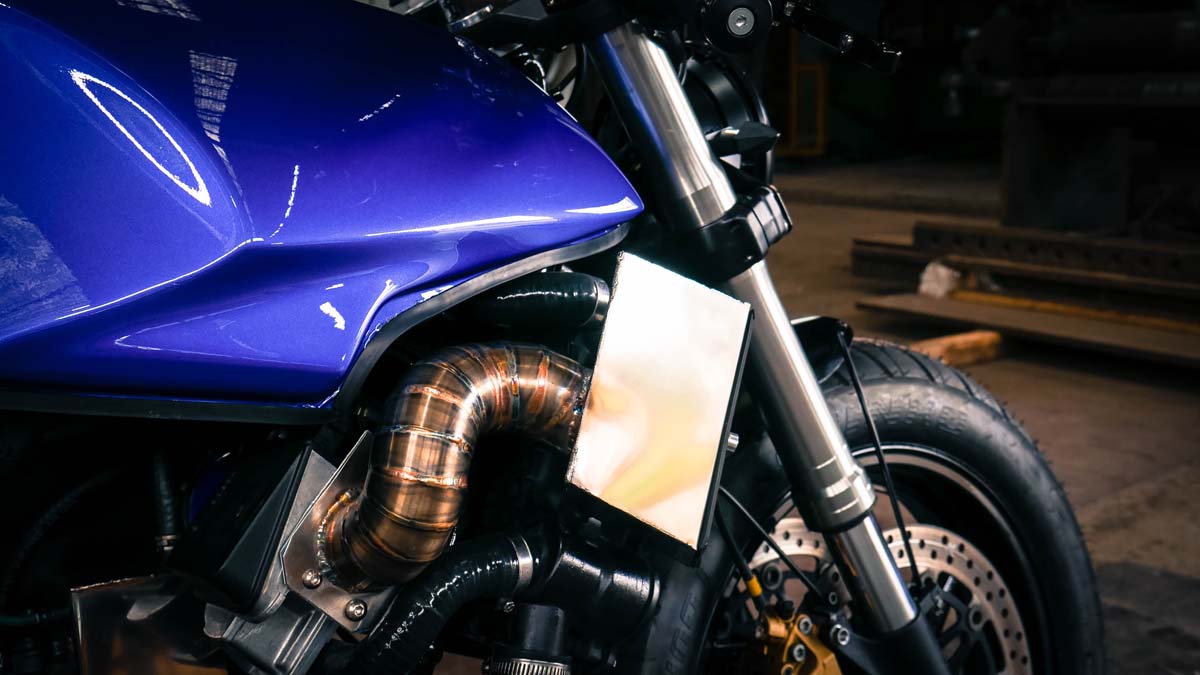 “The bike was being offered at a good price because it was crashed, but it looked repairable and had a clear title,” Jas added.

Introduced in 1984 and offered in one form or another until the mid-1990s, the K75 was born from the K100 that had been introduced earlier in the decade. Like that model, the K75 was defined by an inline engine laid flat across the frame that, to the uninitiated, looked a boxer twin – but more boxy! 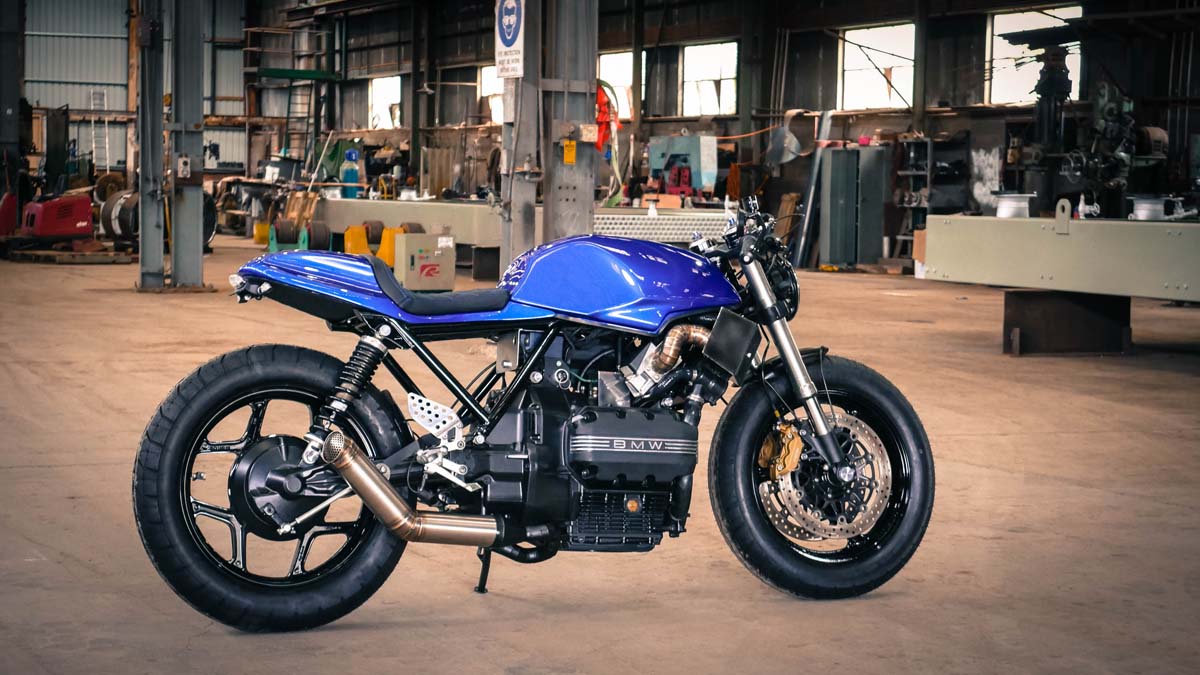 While the K100 was a four-cylinder, the K75 was a triple, with its 740cc engine capable of delivering 55kW (75hp) and 68Nm (50lb/ft) to the rear wheel through a 5-speed gearbox and BMW’s signature shaft final drive.

With a top speed just shy of 200km/h and 0-100km/h acceleration in 4.6 seconds, the K75C was no slouch, despite its somewhat dowdy appearance. Jas recognised this and thought he could give the BMW the looks to match its performance.

As bought, the K75C’s front forks were damaged beyond repair, with the bikini fairing and front plastics (that defined the K75C against the standard K75) broken, too, but the rest of the bike was solid, so it wasn’t a mechanical write-off.

BMWs tend to be better looked after by their owners than some other manufacturers’ models and this one was no exception. Cracking open the engine, Jas found no damage, with the transmission also trouble-free on inspection.

“The bike was in very good condition despite the crash,” Jas recalled. “The tank had a dent in it which we repaired. The rest of the work involved a front-end swap, rear set swap, seat modification, electrical and component installation.”

The front end and some other donor parts came from a 2001 Honda CBR929RR Fireblade. Making German meet Japanese meant some fabrication work was required, specifically on things like the headstem.

Further back on the bike, integrating a set of rearset pegs and pedals from the donor Fireblade requited further fabrication work, including a brake rod and peg adaptors.

The K75C’s trellis-style tubular frame was left mostly unchanged, but detabbed and cosmetically enhanced with a bolt dress-up kit created in-house at JAX Garage. The subframe needed docking to suit the café racer look, though, with a good 10cm or more taken out of the length compared to factory spec.

For the signature café racer single-seat ducktail, Jas sourced a fibreglass unit from Caferacer.eu, but this needed to be cut, shut and remodelled to match the lines of the K75C fuel tank, which apart from being de-badged and having that dent repaired, was left untouched.

Attention to detail in this part of the build included mirroring the lower line of the tank with the kick up of the tail, so the two look they’re one unit, despite coming from different sources. 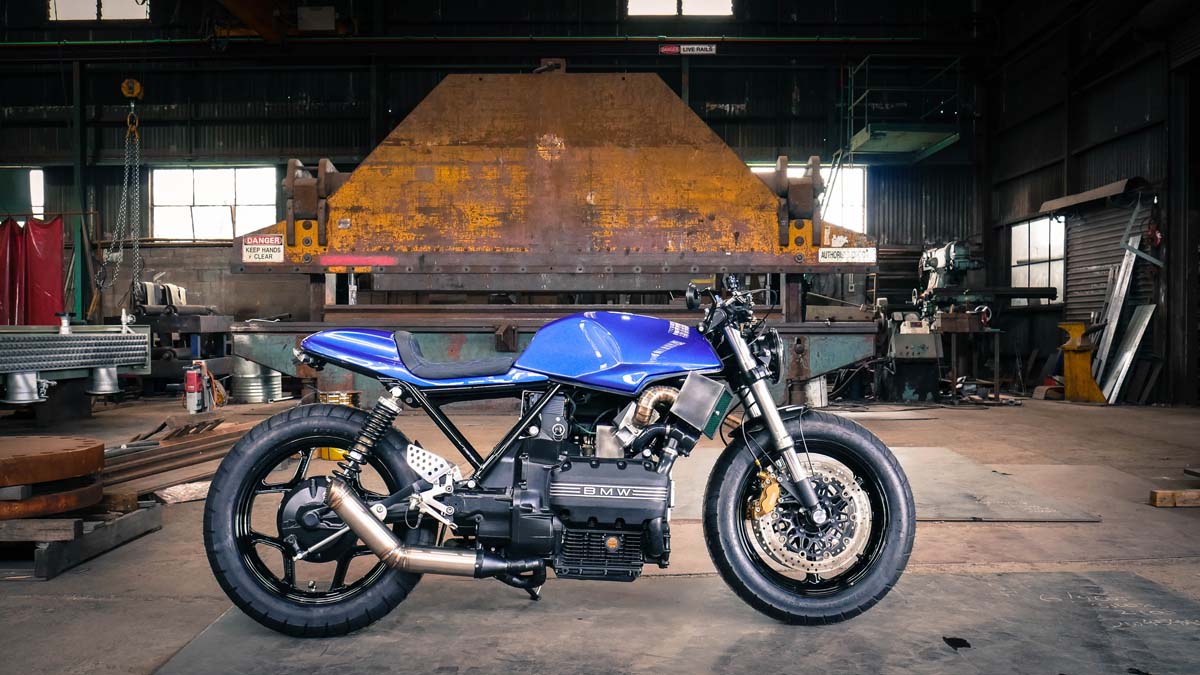 The leather seat - the only part of this build not completed in-house - features old-school diamond quilting and blue contrast stitching to pick up on the BMW Estoril Blue that the ducktail and tank were repainted in.

To make this rich metallic blue pop, Jas selected black for the rest of the bike – satin on the driveline parts, a crinkle black on the engine covers and gloss for the frame and wheels.

Tiny front and rear mudguards escape attention at first glance, but these units were made in-house, fastened using wire-like stays and also finished in black. 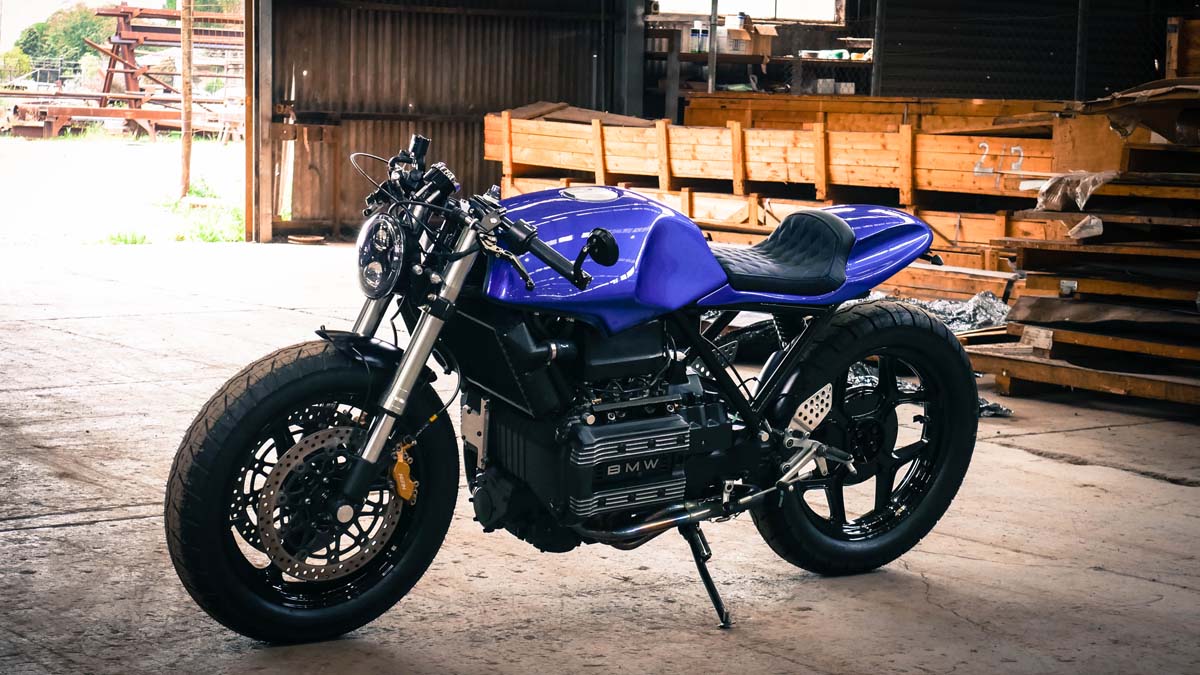 Like rearsets, clip-ons are a café racer staple, so Jas couldn’t consider anything else for this build. The units he sourced were modified to take grips, levers and switchgear from the donor Honda CBR929RR, then capped with a set of aftermarket bar-end mirrors.

As this bike was built to be ridden, the bar positioning and access to the switchgear was checked throughout the build to ensure optimum ergonomics while retaining the café racer look and style – Jas calls it making the bike work functionally and aesthetically.

In place of the chunky factory instrumentation, a compact Acewell 2853 digital speedo was fitted, nestled low in the headstem and integrated with a Joost electrical adapter.

Sitting even lower in the front-end is a Stedi 7-inch LED headlight that was mounted using a custom bracket and is part of a full LED lighting package that includes a Honda CB tail light and SCA indicators.

Along with being rideable, Jas wanted to ensure this bike was legal for road use, so all the lighting is ADR approved.

To keep the front end free of clutter, Jas relocated the ignition barrel under the seat, with some of the electrical componentry repackaged here, too, while a compact lithium-ion battery provides all the juice via a modified wiring loom.

In, Out and Stop

While the BMW engine for this build was left untouched, the same can’t be said for its intake and exhaust system.

Jas and Dom applied their fabrication skills to create a custom airbox with pie-cut sections to feed air into the 740cc triple, while a radiator overflow canister was constructed from stainless steel and tucked in under the tank. A similar level of bespoke fabrication went into the exhaust system, which has an almost racebike look.

How much these modifications add to the factory 55kW and 68Nm is unrecorded, but Jas says the finished product certainly sounds good.

He adds that the biggest benefit to come out of this custom work is the weight reduction. At 197.8kg, Jas says the bike is now lighter than a factory K75C by more than 38kg - that’s a serious diet!

Lighter weight usually equals more performance, so to ensure this bike can stop as well as it can go, the front-end features brakes from the donor CBR929RR, consisting of dual 330mm discs that almost fill the inner diameter of the wheel. Fitted with Nissin four-piston calipers, a custom master cylinder and HEL custom braided lines from GK Tech, these ventilated front discs provide more than enough stopping power, meaning the BMW factory rear drum brake could be left unaltered.

It should be noted that the front and rear wheels are the respective factory units – 17-inch Honda front and 18-inch BMW rear – but the mismatch is masked by those jumbo front discs.

Tyres are Shinko 230 Tour Masters that are a good, multi-purpose street tyre. Jas could have gone for some slicker Pirellis, retro-look Dunlops or chunky Continentals, but the ‘built-to-ride’ mantra behind this build made the Shinkos a practical choice.

The first bike built by JAX Garage was completed in late 2019 after two months' of part-time work.

It did the rounds of magazines and online forums at the time, and while Jas brought it to JUST BIKES’ attention in early 2020, it slipped through the cracks when COVID turned the world upside down, so we’re only featuring it now. Sorry, Jas! 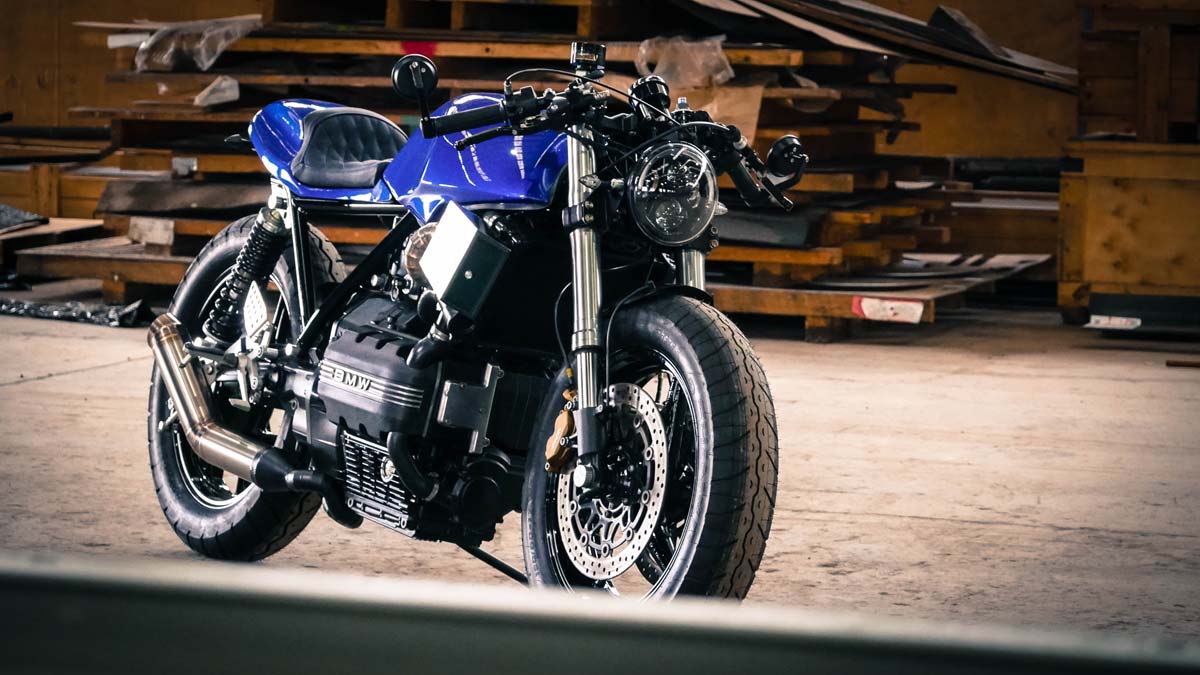 COVID’s had an impact on JAX Garage, too, but not as bad as some businesses. Being a three-person operation (Jas’s wife Christina handles promotion and marketing) made social distancing easier, so other builds have been coming out of their inner-suburban Melbourne workshop over the past two years.

A 1972 Honda CB 750K in the café racer style was completed recently, with a ’79 Yamaha XS400 on the bench at time of writing and a few others in the queue. We’ll share the Honda build at a future date and look forward to seeing how the Yamaha finishes up.

As a first project, you can’t deny this custom BMW is an impressive creation. One particular fan of JAX Garage agreed, following the build’s progress through social media updates and purchasing it soon after it was completed.

If what you see here has impressed you and you’re looking for a bike that’s built to the same standard to call your own, get in touch with Jas and Dom via jaxgarage.com.au