Wedge Motorcycle build a stripped-down flat tracker that looks like a factory machine but has a LOT of bespoke touches.

Yamaha’s Virago would have to be one of the most enduring models in the history of motorcycling.

Introduced in 1981 and offered in a variety of capacities, the 250cc version of the Virago v-twin introduced in 1989 can still be picked up from a Yamaha dealer today, while the current bobber-styled Bolt is a close relation.

For a brief period in the 1980s, the Virago was a flat track racer, too, and the bike pictured pays tribute to that footnote in the Virago’s history. 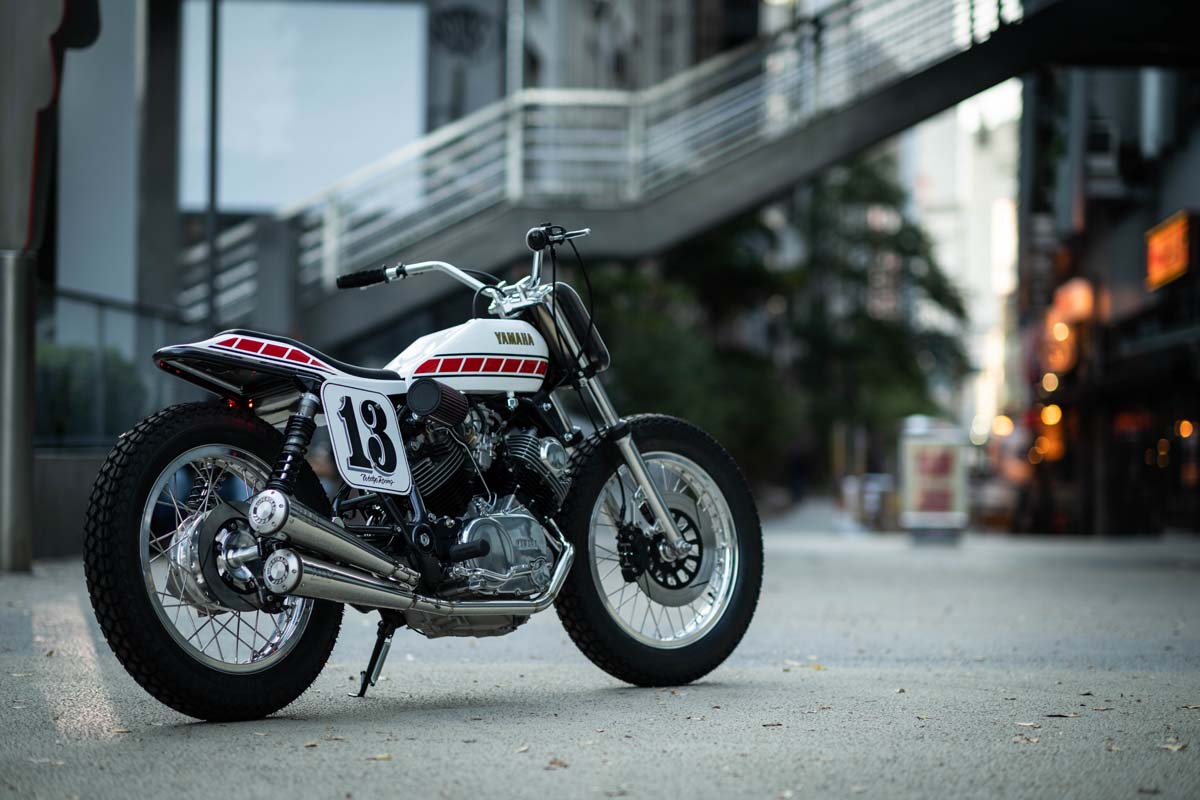 The Virago was a Harley-styled cruiser created by Yamaha primarily for the US market. Launched as a 1981 model, the XV 750 had the v-twin engine, high bars, low seat and forward conmtrols thought essential to tap into the cruiser market, but the monoshock rear suspension was groundbreaking for the segment. Perhaps a little too groundbreaking, as a twin shock rear replaced it a few years later. 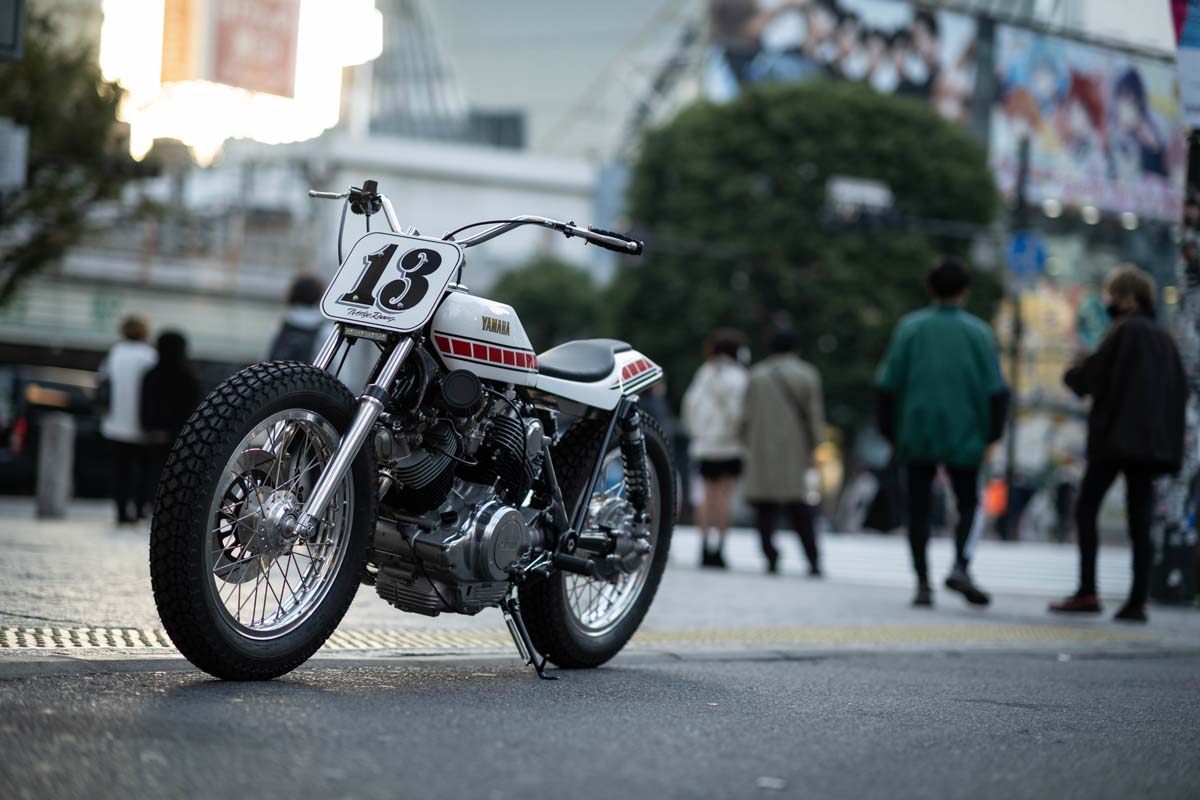 The initial model for the USA was the XV 750 Special, which Yamaha decided to take flat track racing in 1981 to boost the new arrival’s profile in the important American market.

A who’s who of US talent was gathered to develop Yamaha’s tilt at the AMA Grand National Championship, including riders Kenny Roberts and Mert Lawill, and a technical crew made up of Dick Mann, Mike Libby, C.R. Axtell and Bud Askland, amongst others.

For Grand National competition, several changes were made to the Yamaha to ensure it would be competitive against Harley-Davidson’s dominant XR750, including engine tweaks, conversion from shaft drive to chain drive and replacing the factory fuel tank and bodywork with lightweight fibreglass items, with development ongoing through the 1981 season.

While Roberts and Lawill were the star attractions, Mike Kidd and Jimmy Filice would do a lot of development work and most of the actual racing on the XV 750 flat tracker. Curiously, even though he was contracted to Yamaha, Kidd was allowed to race Harley-Davidsons in long track events, and when he looked like winning the AMA Grand National Championship, parked the XV 750 for the remainder of the ’81 season as he chased the title. 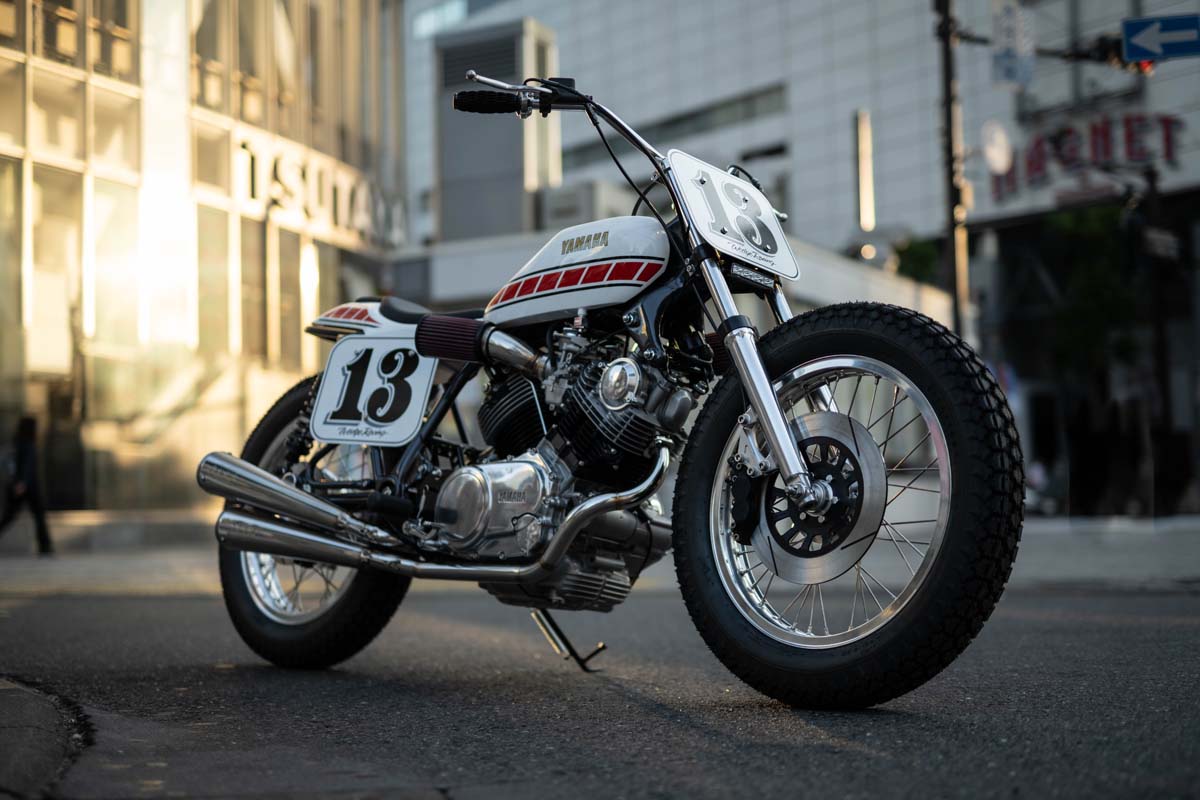 After winning the championship, Kidd departed for Honda, leaving Filice to shoulder Yamaha’s load for the 1982 Grand National season. Although he came close on several occasions, Filice never made a main event final on the XV 750. Later that year, an injury ended Filice’s season and a recession led to a rethink of the whole factory campaign. Despite the XV 750 producing power that was mostly equivalent to the Harleys and showing potential that could be pushed further with more development, Yamaha wrapped up the programme at the end of 1982.

A Tribute for a Fan

That 1981-82 flat track campaign is one of the more niche elements of Yamaha’s long competition history, but nevertheless, it was one that inspired the bike presented here, which was built by Takashi Nihira of Wedge Motorcycle in Japan.

One of Japan’s most respected custom bike builders, Wedge Motorcycle has won awards at the prestigious Yokohama Hot Rod Custom Show, as well as overseas events. More recently, Nihira-san was invited to take part in the BMW Motorrad Japan G310R factory project. Coincidentally, what Nihira created for that commission was also flat tracker-inspired and featured with JUST BIKES some years ago.

For this build, the customer supplied Wedge Motorcycle with an XV 750 Special (believed to be a first-year 1981 model) and a brief to create a copy of the flat trackers raced by Yamaha in AMA Grand National competition. However, Nihira-san convinced the client to go in a slightly different direction - a bike that was inspired by those factory flat trackers, rather than a clone of one.

“I didn't want to make a copy of the factory machine,” Nihira explained. “The first reason is that the balance between the large engine of the XV 750 and the small exterior of the factory (racing) machine is bad.

“And second, I thought that I should use modern materials and manufacturing methods to meet the wishes of owners who want to use the finished bike on a daily basis.”

While he wasn’t totally in sync with the customer’s wishes, Nihira-san was nevertheless intrigued by the project, especially the flat tracker theme, given the vast majority of XV 750 custom builds in the past have been café racers.

Where Yamaha’s factory-backed flat trackers featured fibreglass fuel tanks and bodywork – what little of it there was – Nihira chose steel for the fuel tank on this homage.

“Fibreglass fuel tanks will corrode over time, and if it was built out of aluminium, it is likely to be damaged by engine vibrations,” Nihira explained.

Using photos of the factory machine as reference, steel plate was bent, shaped and welded to replicate the fibreglass tank, including the mounting points.

For the seat cowl, the bike’s owner sourced a unit from the US and sent it to Wedge Motorcycle, but whether it's an original 1981-82 piece or a replica is unclear.

To match this slimline tail unit, Nihira fabricated up a new subframe, but the main frame remains the XV 750 Special original.

It would have been easier to retain the monoshock suspension for this build, but Wedge Motorcycle went the extra yard to fabricate a twin shock rear to continue the factory flat tracker look. 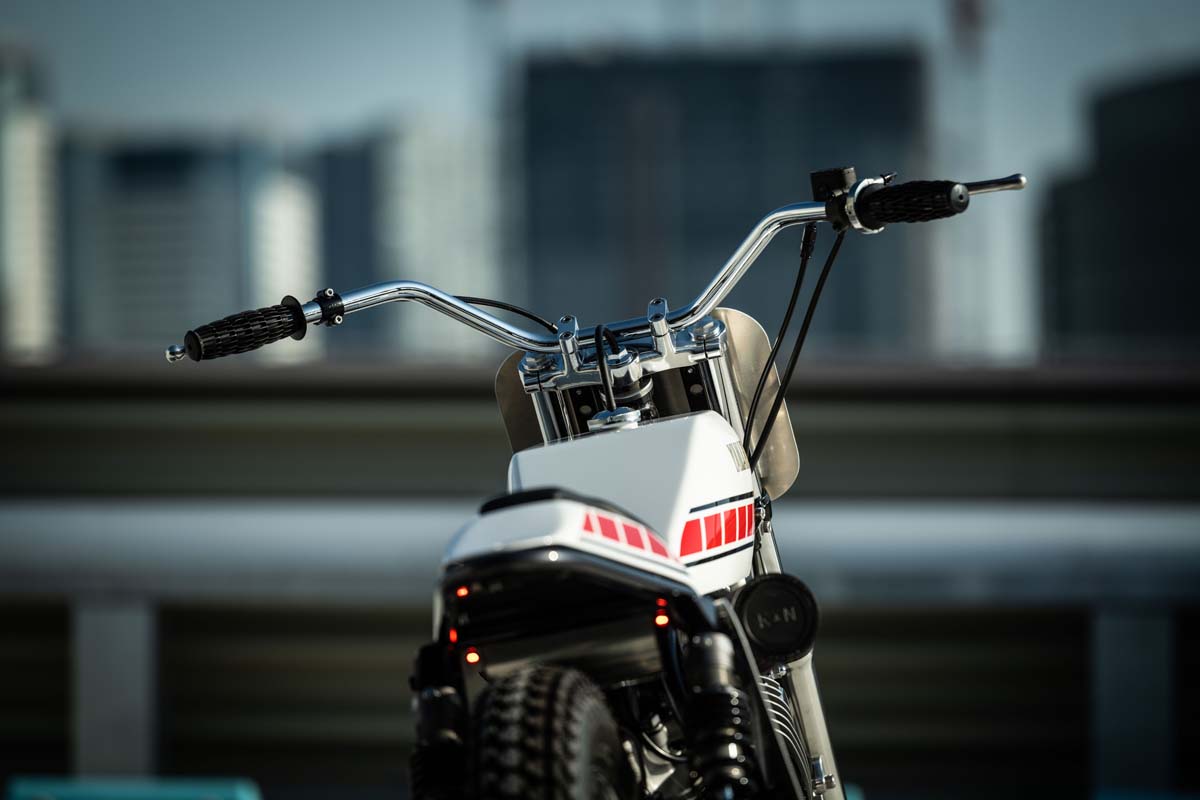 This was trickier than it sounds, especially given the decision to retain the shaft drive, rather than go for a chain drive conversion. The result is that a swingarm from a later twin-shock XV 750 Virago was used as it had the desired mounting points, but this still needed to be altered to suit.

“I modified the rear suspension mounting position so that the swingarm moves smoothly,” Nihira added.

While it’s a long way removed from stock, it all looks “right” and you’d need to be familiar with early Viragos to pick the mix ‘n’ match approach to the rear swingarm and other Yamaha componentry used in this build. 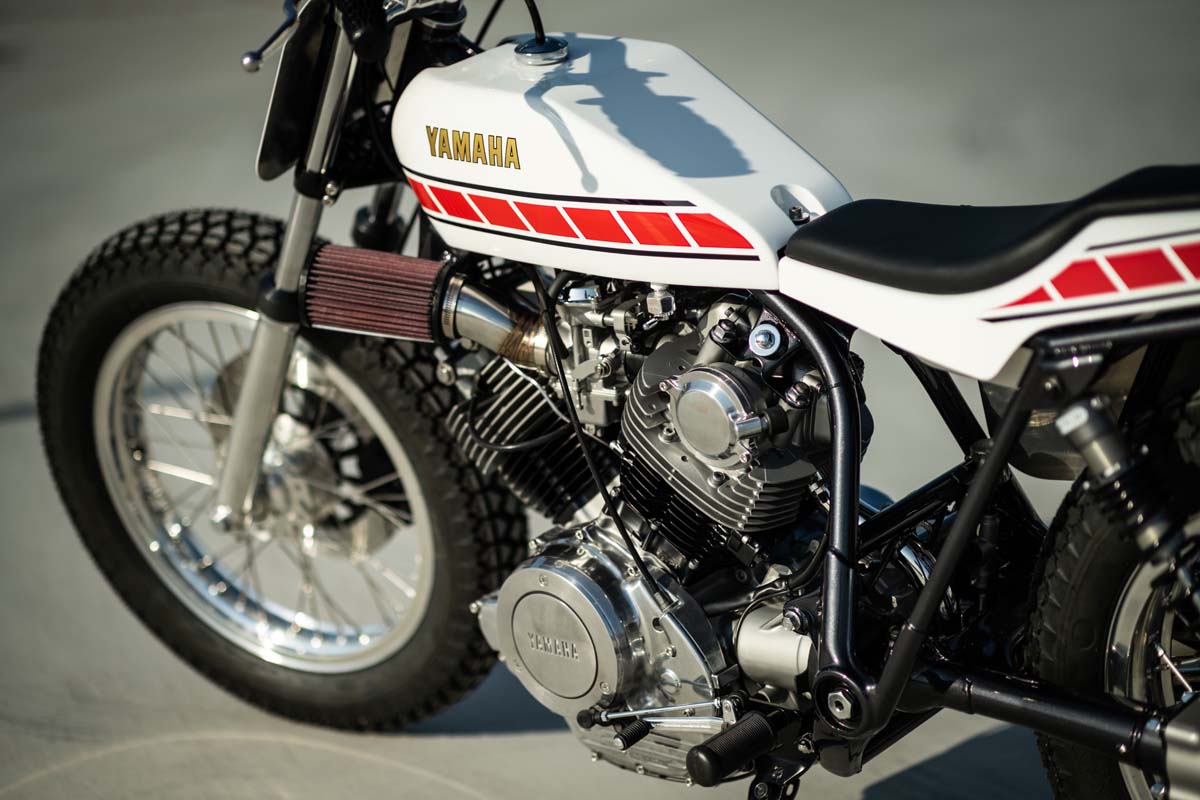 “Because it has a shaft drive, the width around the rear is wider than that of a chain bike. Therefore, I placed the suspension and exhaust system as close to the body as possible, aiming for a slim and sharp silhouette.”

To achieve that slim cross section, the shocks chosen for the rear were compact Nitron adjustable units from the UK. Up front, it’s Yamaha factory suspension, but not from the XV 750. Instead, Nihira selected 35mm forks and the accompanying headstem from an XS 650, while the top yoke is from an SR 400.

Neither of the wheels and hubs are from the donor XS 750, either. The front hub is from an XS 650 and the rear from an XV 1100, matched to 19-inch spoke wheels with the desired deep-shoulder ‘H’ profile and Firestone tyres (with ANS tread pattern) at each end.

The bike owner sourced a suitable rear wheel from an online auction, which Nihira-san then matched to the aforementioned XV 1100 hub. 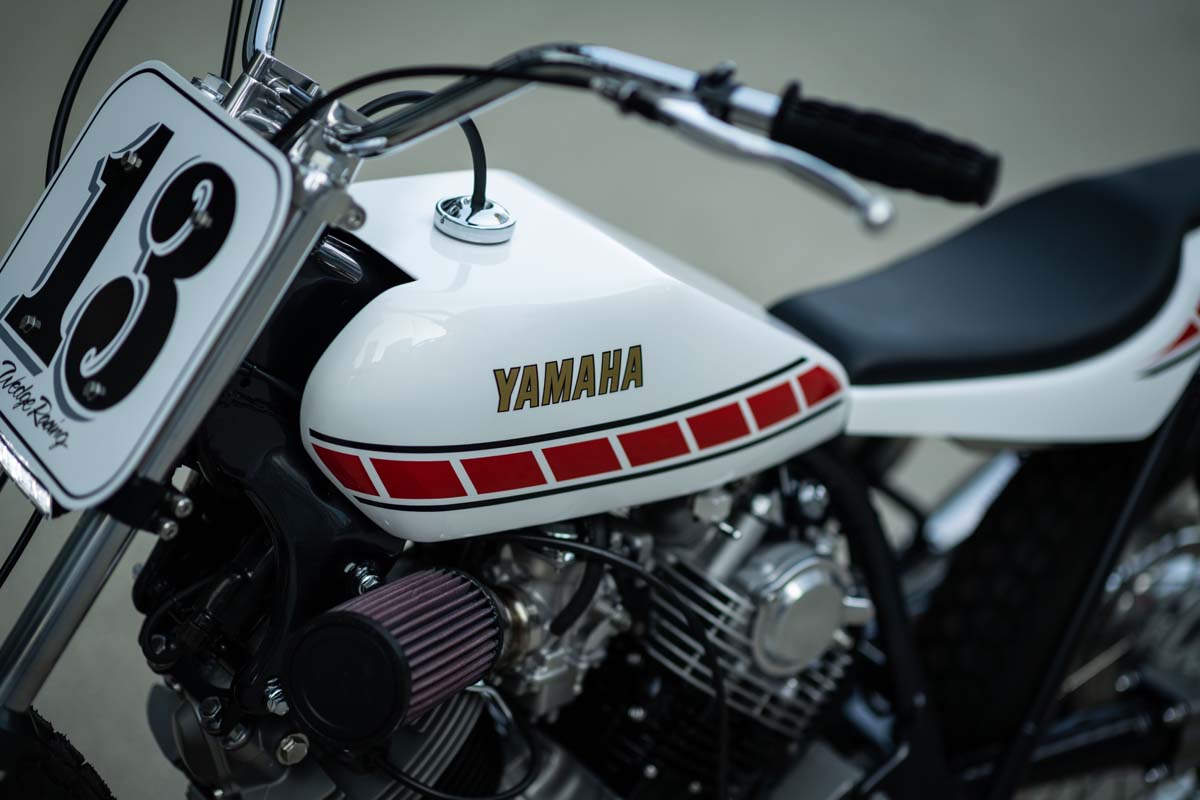 Two from One and Tricky Brakes

When it came to the XV 750 Special’s engine, it wasn’t too healthy, so a second engine had to be sourced and parts from both used to build one good v-twin powerplant.

The heads, barrels and pistons were all overhauled or replaced, while any required parts that couldn’t be used from the provided engines were sourced from specialty suppliers in the USA or remade from scratch, as they’ve been out of Yamaha’s parts bin for a long time. 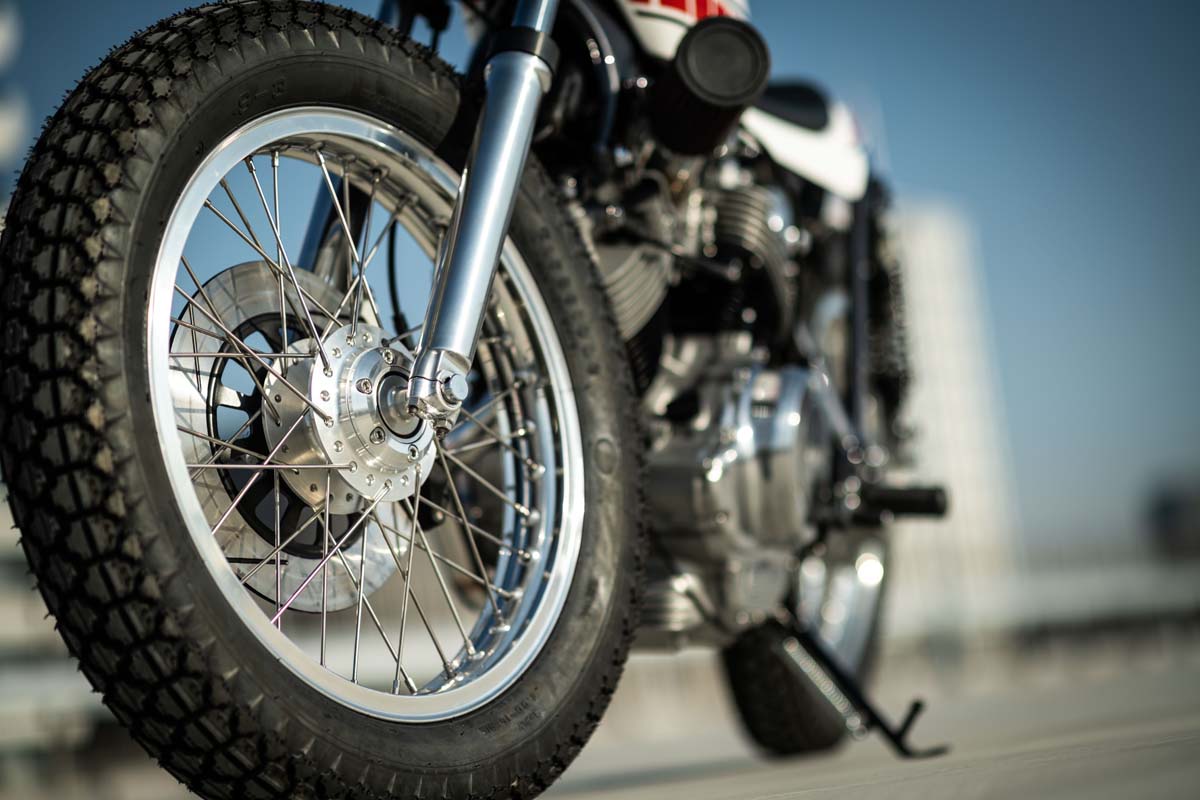 Amongst those scratch-built parts was the intake manifold with its distinctive trumpets that are capped with K&N pod filters. 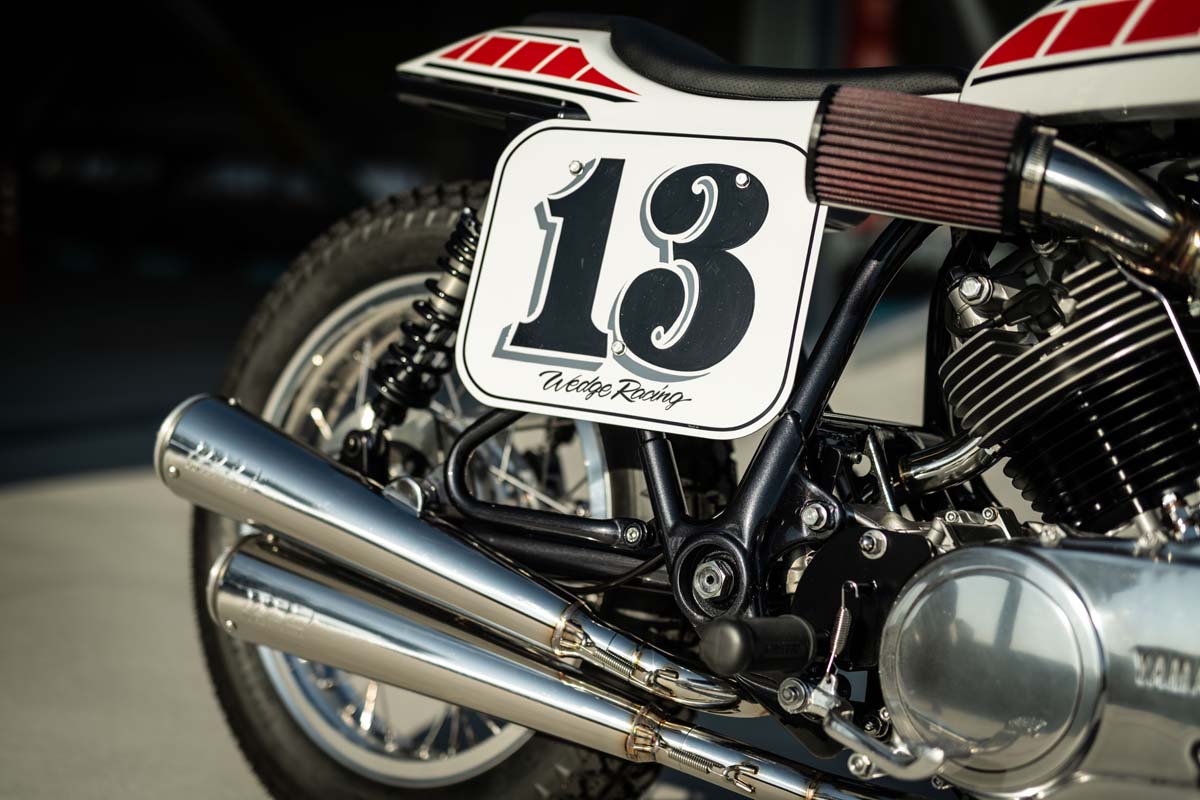 Seen in profile, the v-twin engine and 19-inch rims dominate this bike’s appearance and Nihira-san didn’t want to upset that with a bulky disc brake conversion at the rear. So, the Cognito Moto combined rear hub and disc brake unit he sourced for the project was modified. As the finished rear disc brake is no greater in diameter than that oversized XV 1100 hub, it looks like the bike still has a drum brake rear when seen from the nearside. From the offside, the disc is mostly covered by those Supertrapp silencers.

Incorporating the rear brake master cylinder was a little tricky, especially with the header pipe from the rear cylinder and shaft drive to consider. The solution Nihira found was to mount it reasonably high on the frame, where it’s covered on the offside by a retro-look race plate. 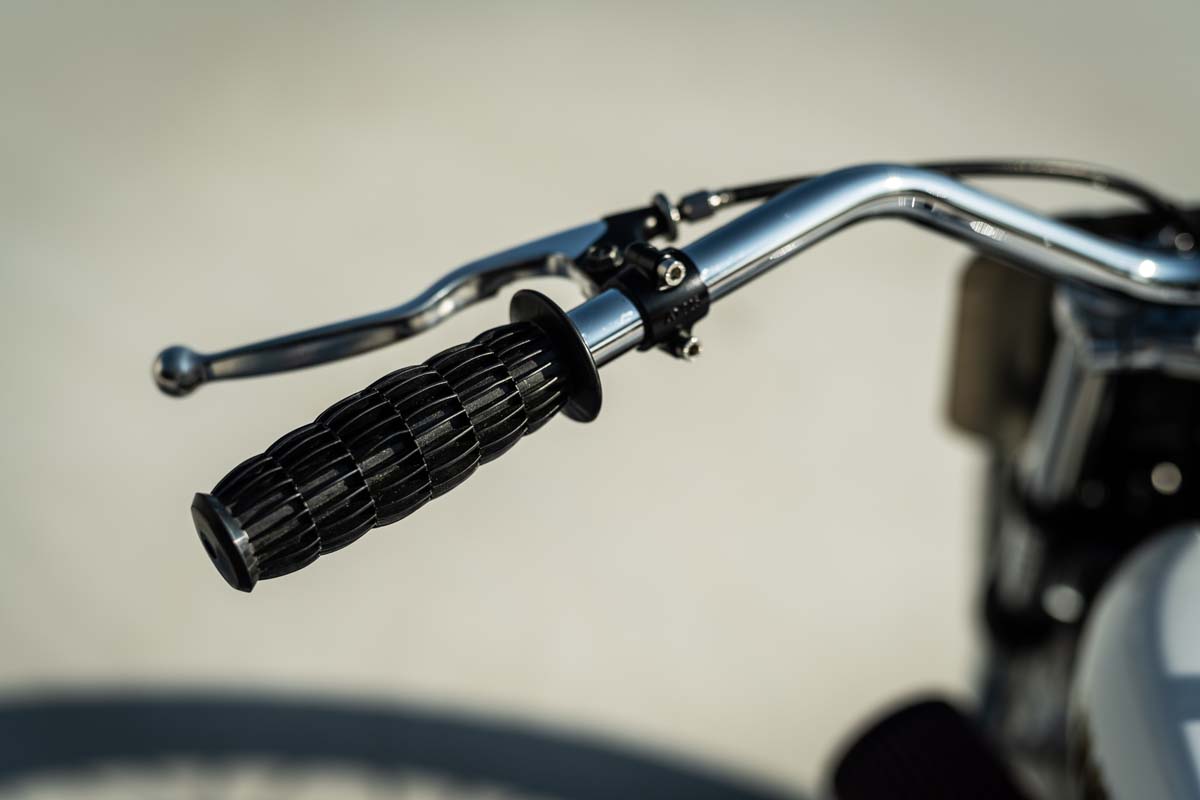 “With the shift to a disc for the rear brake, I also made major changes around the foot pedals,” Nihira added.

Although they look like factory items, the pegs and pedals are all bespoke, made by Nihira at Wedge Motorcycle..

In line with the minimalist aesthetic driving Nihira’s approach to this build, there are no mirrors, no mudguards and no switchgear, while the instrumentation is a tiny Motoscope Mini from MotoGadget that’s tucked behind the front race plate.

Slung below that is a slim LED headlight, while a Kellerman rear light and indicators are mounted under the tail.

The grips are retro waffle-style and the ignition is placed in the seat cowl, with all the electrics mounted under the seat in a custom-made box.

With this creation removing a lot of the bulk and garnish of the XV 750 Special, it’s safe to assume a fair chunk has come off the factory 227kg weight, but exactly how much is unknown.

The finishing touch on this creation is the paint. Wedge Motorcycle started off as a motorcycle painter, so it’s no surprise that the colour on this custom is top notch. 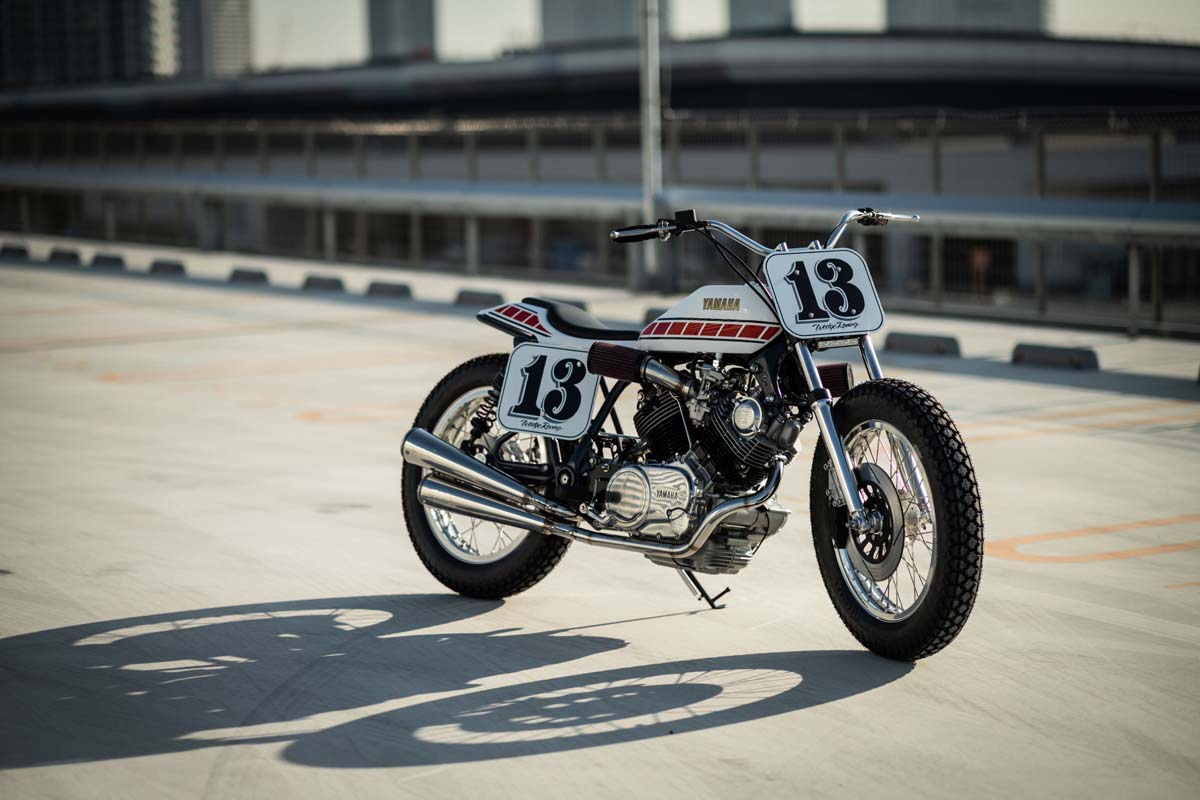 The hand-painted race numbers have an old-school signwriter’s touch, while the ultra-smooth white with red ‘speed block’ graphics is a signature Yamaha colour from their road race bikes back in the 1970s and ’80s. It’s interesting to note that Yamaha’s original factory flat trackers for 1981 and ’82 wore a completely different – and pretty bland – colour scheme of white and black. 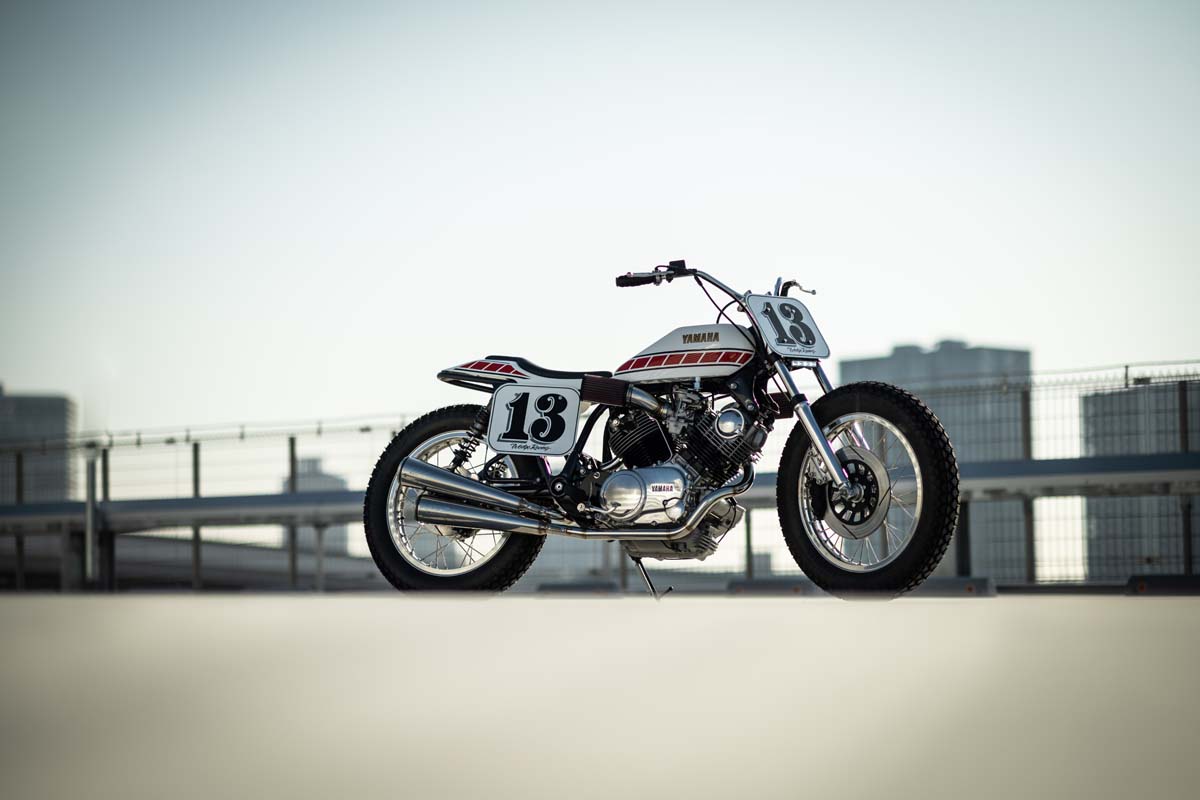 Most people wouldn’t realise this, though, thinking what’s presented here is a factory livery. This pleases Nihira-san, as does this bike’s overall appearance, even though the end result was a little different from what he originally intended.

“It looks like a standard bike even though each part is thoroughly built,” Nihira explained. “When I completed this machine, it looked like a manufacturer's bike and I was a little worried. But the owner is very happy with the finish.”

We reckon there are plenty more people happy with this bike’s finish, too.

Special thanks to Tadashi Kohno for assistance with this article.