This classic Kawasaki has a factory look, but is far from a factory creation.

While all custom bikes have their merits, there’s something additionally intriguing about a custom creation that looks like it may have come from the manufacturer. Such is the case with the classic Kawasaki KH 500 featured. While it looks like a Japanese factory creation, it’s actually the product of a talented British enthusiast.

Australian audiences probably don’t know Allen Millyard, but there are a few of you who would be familiar with the work of this motorcycling equivalent of Dr. Frankenstein. 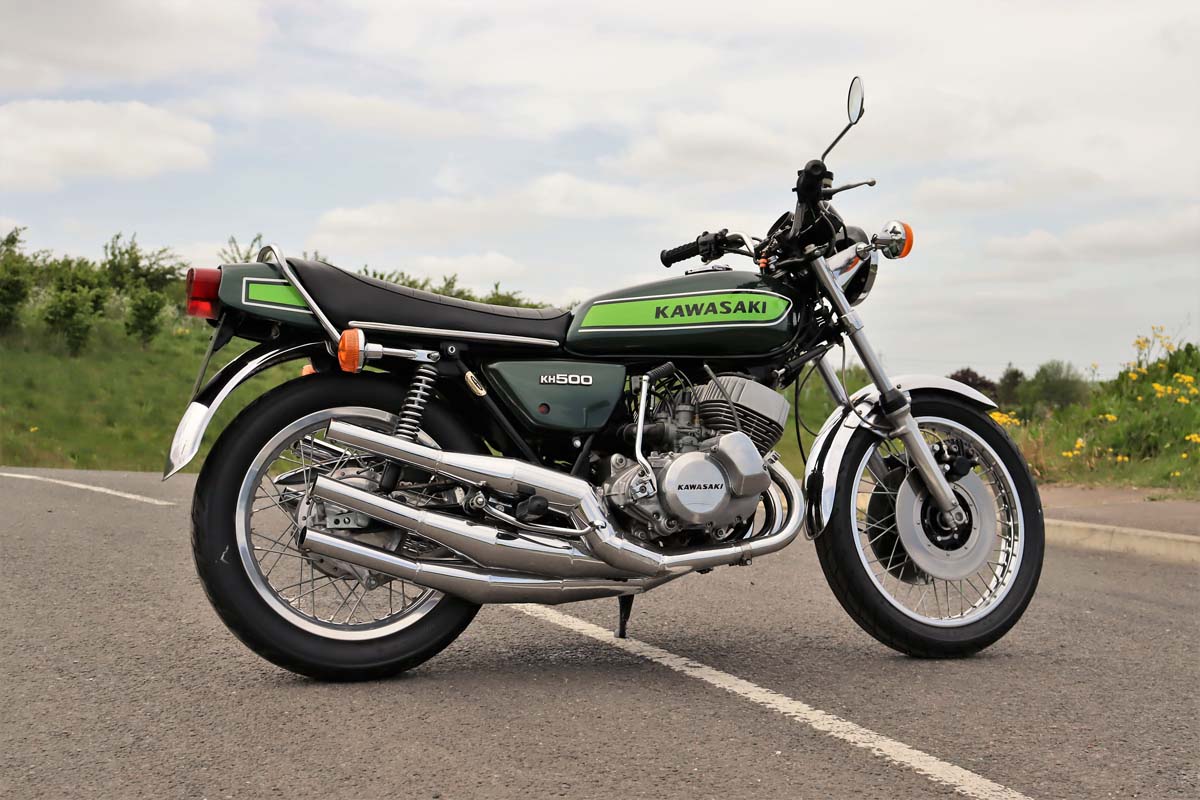 A contributor to Classic Motorcycle Mechanics magazine in the UK, Millyard has been turning out custom bikes for more than 25 years. And while he’s a long-term motorcycle owner, his background isn’t in motorcycle engineering.

Most of Millyard's career has been in high-tech weapons engineering for the UK Ministry of Defence. He’s literally a rocket scientist, so mucking about with old two-strokes is child’s play!

This clever Brit’s enthusiasm for bikes – and backyard bike engineering – dates back to his youth. An early experiment involved transplanting the telescopic forks from a Suzuki B 210 into his bicycle, creating a mountain bike long before the term even existed. 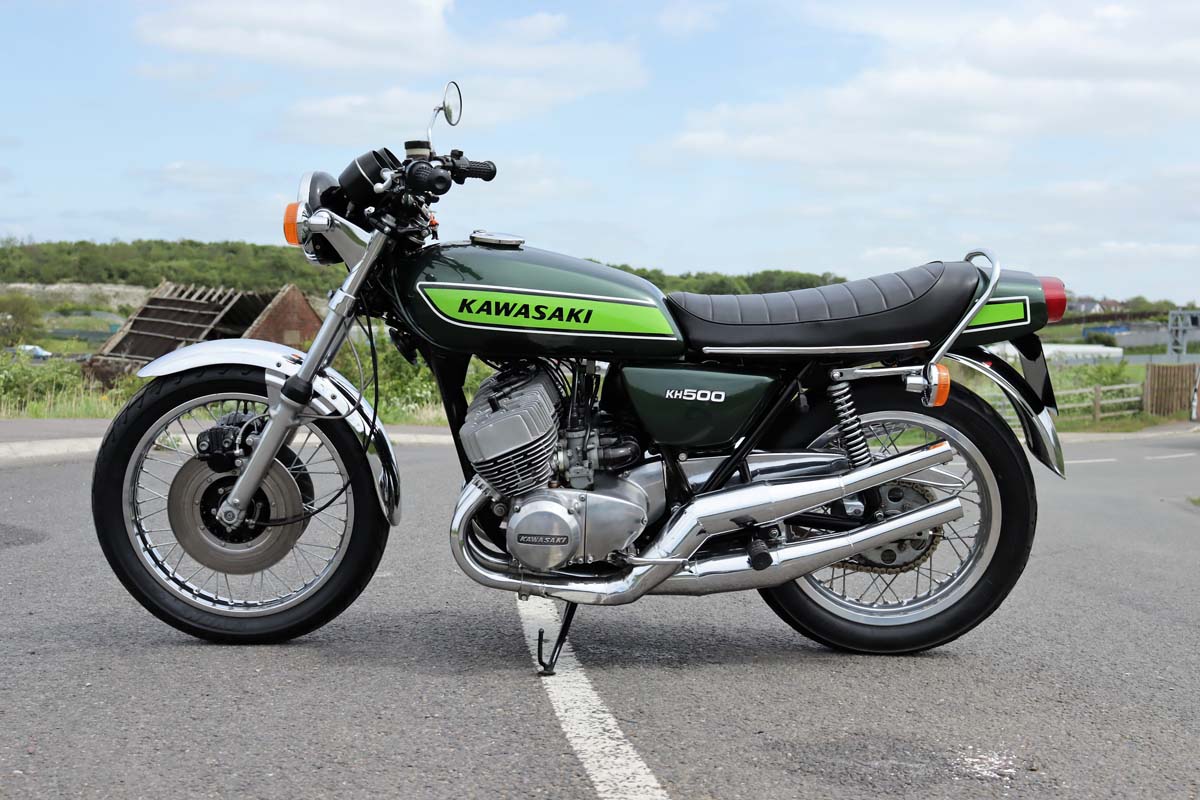 As a teenager, Millyard fitted a 200cc lawn mower engine into a Raleigh Wisp (a bicycle-style moped), essentially doubling its power and speed, then transplanted a Mini Cooper engine into a cut and stretched BSA Bantam.

Fast forward a few decades and Millyard started upscaling his creations, both in terms of size and ambition, despite operating out of a tiny shed that’s packed with milling and drilling equipment. These are recent additions, though, with most off his early work done entirely with hand tools and a welder.

In the mid-1990s, Millyard started building the multi-cylinder machines he’d become renowned for in the UK, as well as some truly bespoke creations, including one with a Dodge Viper V10 and a massive ‘Millyard Special’ powered by an equally massive 5.0-litre v-twin that was originally part of a radial aircraft engine.

The very first, though, was a Kawasaki H1 two-stroke triple – like the bike featured – that Millyard converted into a five-cylinder in 1996.

Similar creations followed with one or two additional cylinders (and sometimes deleting a cylinder), while a more ambitious project involved turning a Kawasaki Z1300 into a V12 with the addition of a second bank of six cylinders.

Most of the builds to date have been for Millyard’s own use, and while he has made a few for friends and to order, custom bike building isn’t a business for him. 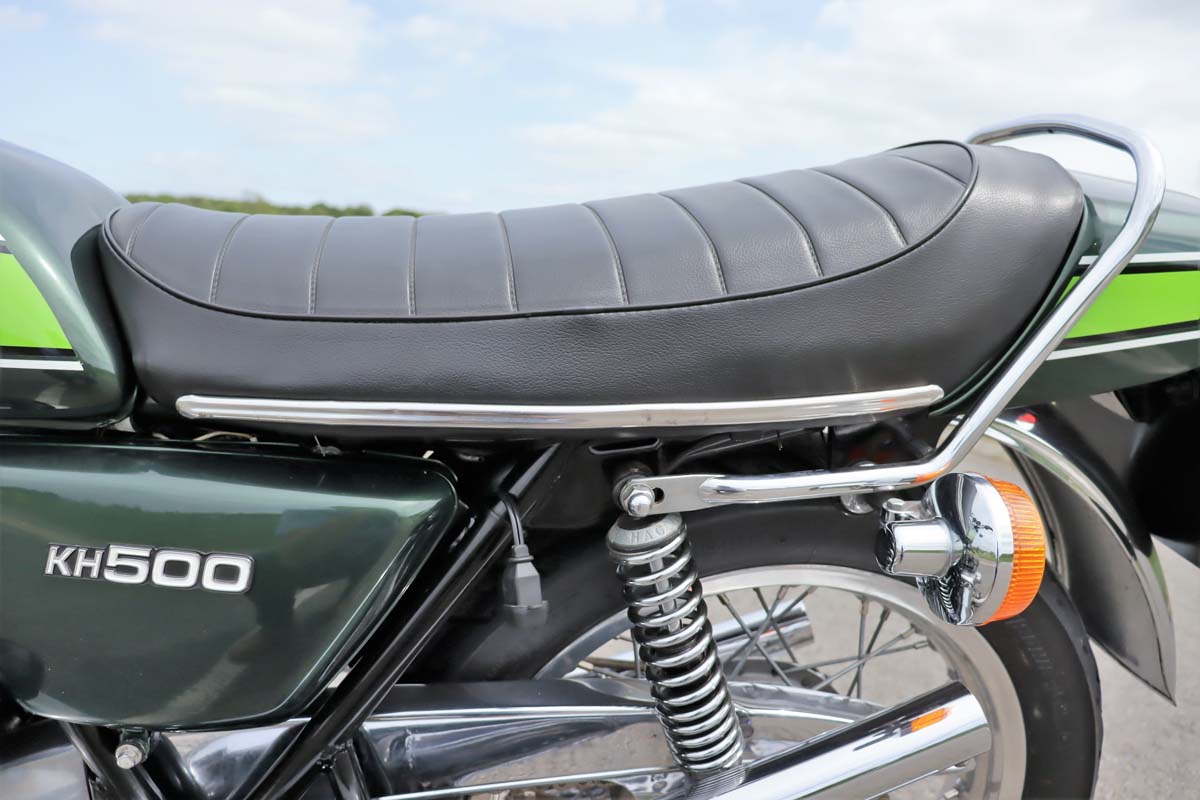 Importantly, all of Millyard’s creations are rideable (the Millyard Special has done 10,000 miles and the Viper V10 almost 9,000), so a lot of work goes into the frame, suspension and brakes to ensure they handle and stop as well as they go.

All of these one-offs are impressively engineered. Some are damn quick, too, with the aforementioned Viper V10 ridden at speeds in excess of 320km/h.

The bike featured here is one of three five-cylinder conversions that Millyard has produced off a Kawasaki KH 500 triple. Dubbed the ‘KH Five,’ it was built in 2005 for Pip Davidson, a close friend of Millyard’s and is the only one in the UK, with the others residing in the US. 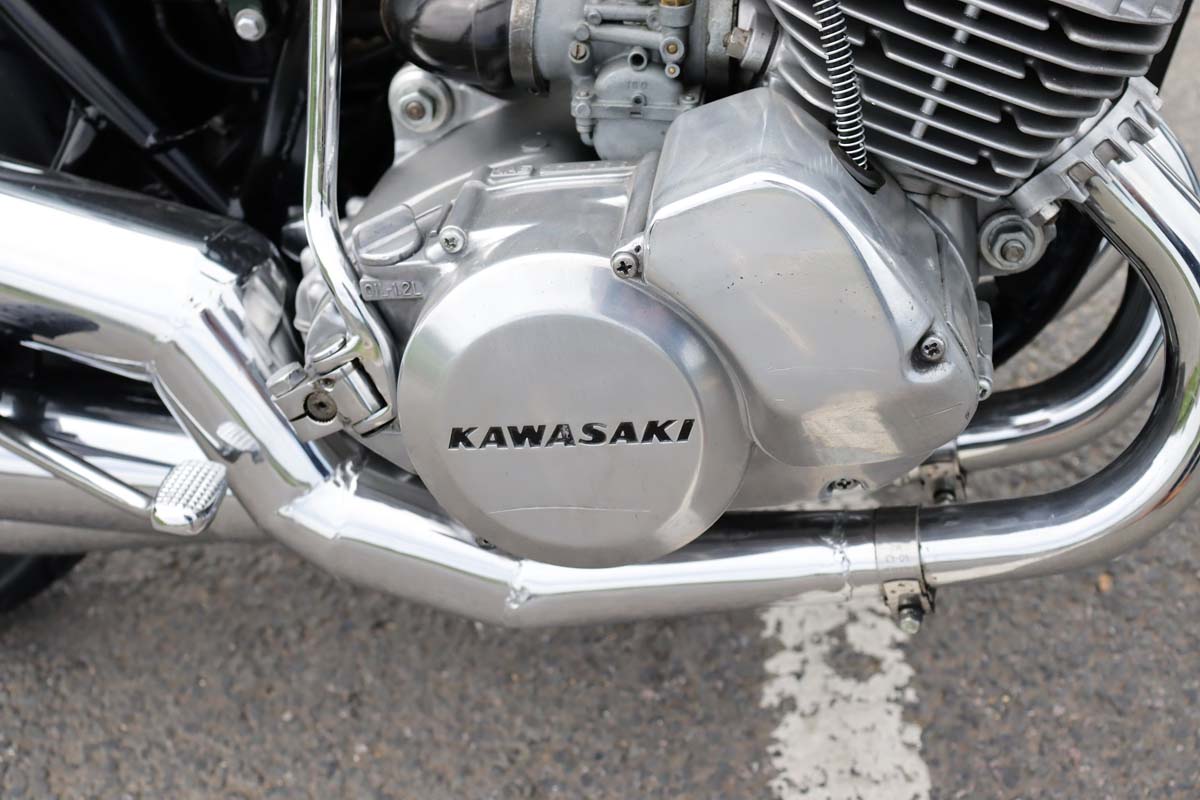 In its original form, this bike produced 38.7kW (52hp) and 53Nm (39lb/ft) from its two-stroke 498cc three-cylinder engine, while skinny forks, a single front brake disc and drum rear brake reflect the period when it was built.

With the addition of two extra top ends and a heavily modified crankcase, capacity has increased to 830cc, and while power obviously increases in this form, exactly how much extra power this configuration produces is unrecorded.

To turn the triple into a five, Millyard took a pair of KH 500 engine crankcases, cut them into sections with a hacksaw, then welded them back together to create a five-across-the-frame configuration. The same engines donated their top ends, which were modified to suit, while two crankshafts were combined into one and the oiling system also made into one unit from a pair of donor oil pumps. 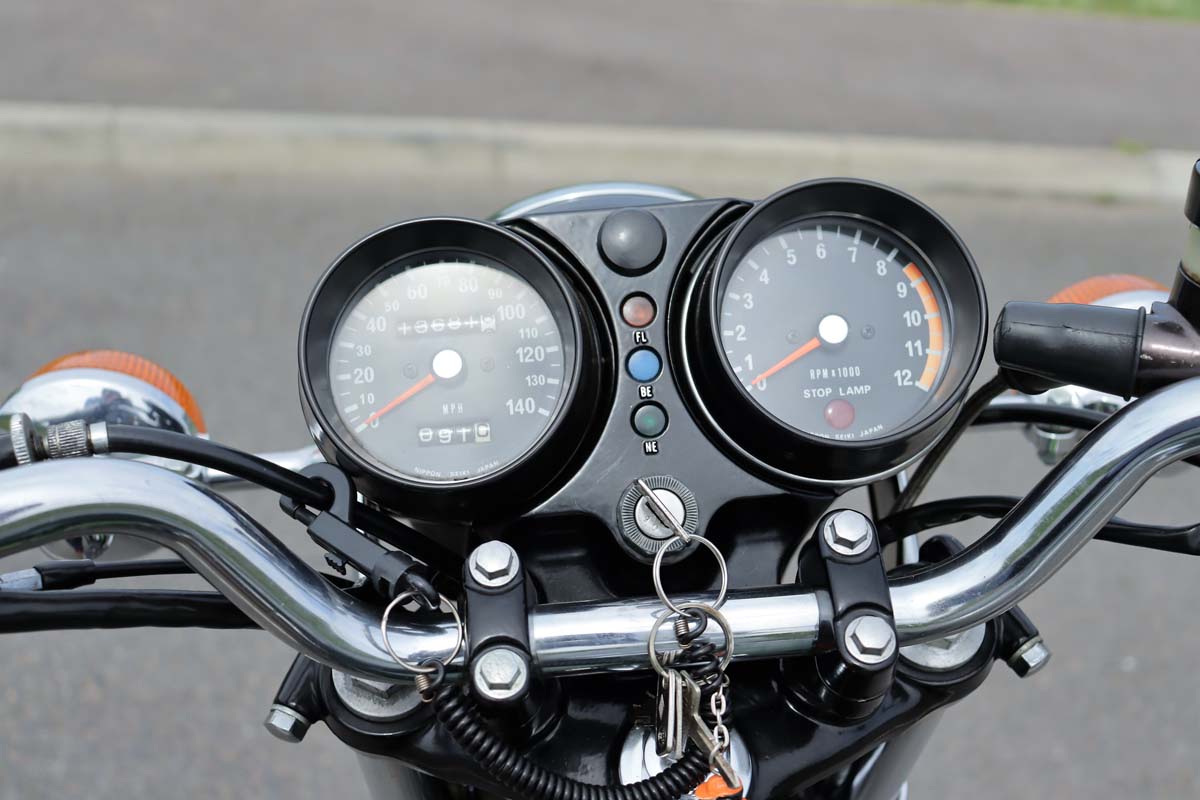 The gearbox output shaft needed to be extended to allow the engine to be placed centrally in the frame, but the factory 5-speed gearbox is unaltered. Same goes for the suspension and most of the cycle parts, but the brakes have been upgraded with the addition of a second factory-look disc on the front end.

With these classic-based creations, Millyard always aims to retain as much of the bike’s original look and features as possible, so wacky colour schemes and custom finishes are out. A slight exception in his instance, though, is the exhaust system.

The silencers and rear section of the pipes are all scratch-built - cut, shaped and rolled by hand, then welded together by Millyard before being sent out for chrome plating. They’re not factory, but they are striking and add an undeniable element of visual bling to this build.

While Millyard is an engineer and builder, he’s not a restorer, so things like painting, seat trimming, plating, powder coating, polishing and the like are outsourced to trusted experts. In the case of the KH Five, the factory-look paint was applied by friend and vintage car paint specialist, Neil Howarth.

Since completion in 2005, the KH Five has featured in numerous UK motorcycling magazines. It's been ridden regularly by Davidson, too, with Millyard occasionally joining him on his own 1974 H2B triple converted into a four-cylinder.

The riding experience of a Millyard five-cylinder (although not this bike, specifically) has been described as much smoother than in three-cylinder form, as the firing order is every 72 degrees instead of every 120. Different front and rear sprockets help here, too, ensuring available torque isn’t wasted. 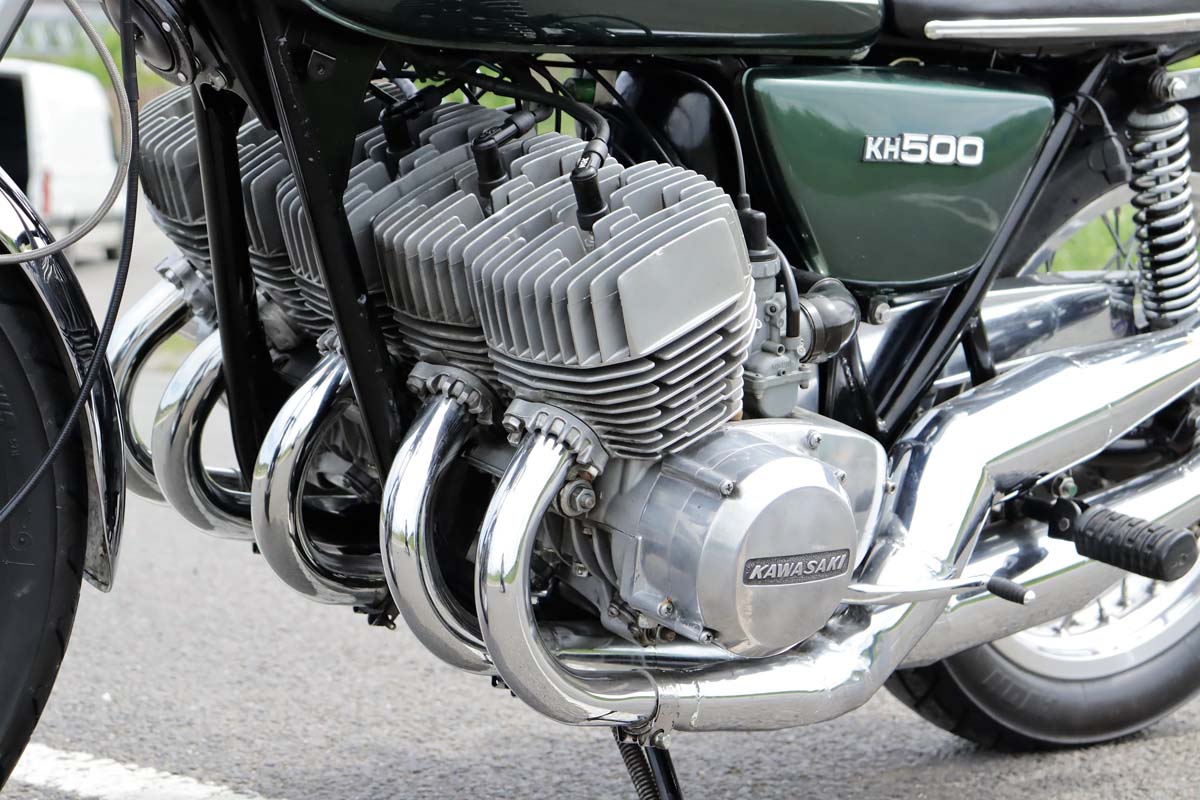 After 17 years of ownership, Davidson has decided to move his bike on, consigning it with H&H Classics in the UK for their auction at the National Motorcycle Museum on 20 July.

Overall, this bike still looks freshly built, despite the mileage of 13,681 suggesting around 800 miles have been covered annually since completion. 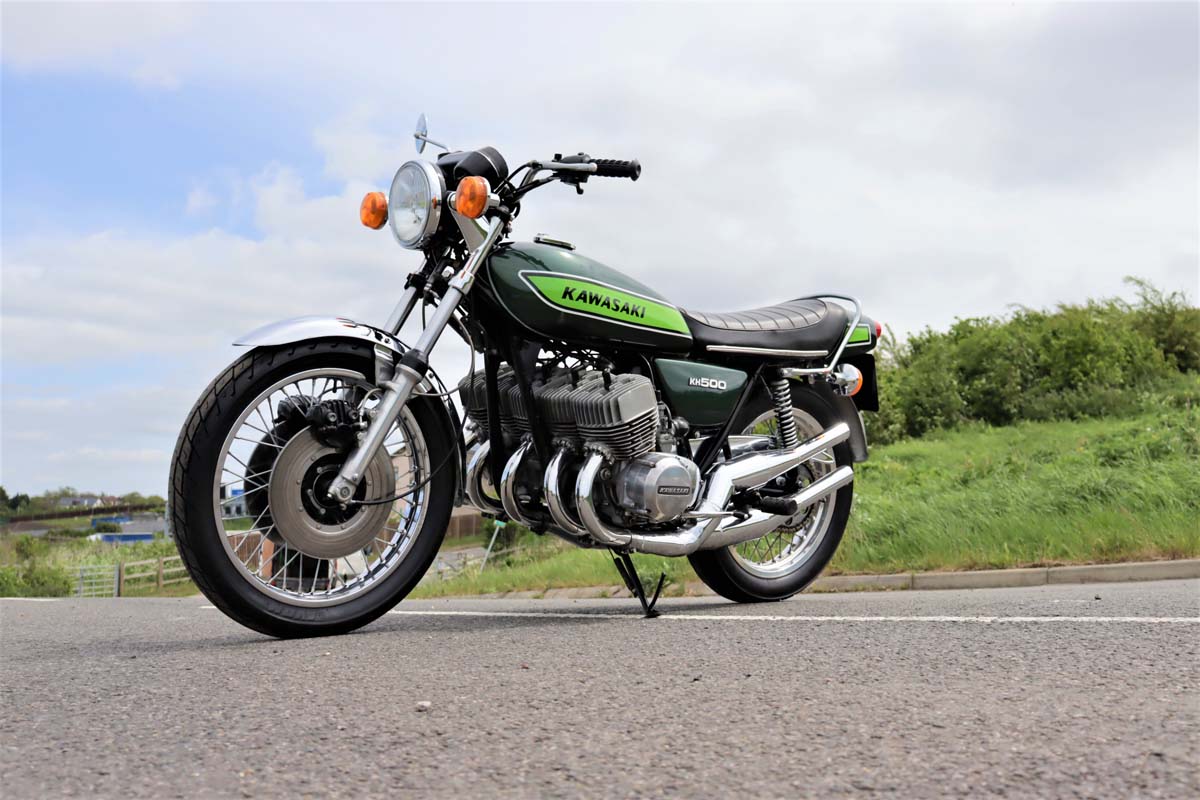 In many ways, Millyard's customised classics are like the Carberry Enfield v-twins produced locally by Paul Carberry, while his more radical creations could be compared with the work of Ian Drysdale.

If you’re unfamiliar with Millyard’s work, look him up on YouTube. You’re sure to be impressed by what you see.

Given two of these Kawasaki triple-based creations are now residing in the US, H&H Classics expect international interest in this motorcycle when it goes to auction on 20 July. If you’re tempted by the bike on offer, you can find out more at: handh.co.uk