A year in the making, this custom Moto Guzzi T3 was worth the wait.

When Roger Westlake produces or commissions a custom bike, you can be assured the end result will be something special. At JUST BIKES, we have first-hand knowledge of this, with two of his many builds featured with us in the past – a Harley XR1200 café racer from 2011 and a Kenny Roberts tribute Yamaha R6 from 2018.

One of Roger’s most recent custom bikes is the café racer custom Moto Guzzi pictured.

With his long history in motorcycles, Roger had plenty of inspiration he could put into this build, from standard fare like Triumphs, BSAs and Hondas, to exotics and rarities like Ducatis, a Dresda Triton and Sunbeam S7.

That brief list alone shows no particular affiliation to any brand, genre or era. If anything, it shows Roger’s willing to give anything a ride!

This café racer custom, based on a 1975 Moto Guzzi 850 T3, was already in development when that Yamaha project from 2018 was completed. And while it was a full year in the making, it was absolutely worth the large amount of time put into it.

The base Guzzi was a solid, but sorry looking unit that Roger had purchased from Motociclo in St. Peters. However, the sale came with a condition.

“John from Motociclo had acquired it and was going to do something with it himself, but got caught up in building a larger workshop,” Roger explained. “So, he said he’d like me to have it – but only if I did a good job of it!”

Big, transverse v-twin Guzzis like the T3 are no strangers to café racer conversions, with several appearing in recent years. German builder KaffeeMaschine was the specific inspiration for Roger’s, and back when JUST BIKES spoke to him about his freshly-finished Yamaha project, he was already on the hunt for parts for this next vision.

To bring that vision to life, Roger called on Jeremy Tagand, the Head of Motorcycle Development at Deus Sydney (Camperdown), who has taken on several projects for Roger in the past.

Jeremy’s credentials in the custom motorcycle scene are already well established. He’s the go-to guy not just for Roger, but for many, many others who are looking for a cool custom bike to add to their garage.

Jeremy did most of the work on this project and describes it as a ‘bitsa’. Roger can take the rap for that label, as the mix ‘n’ match approach to componentry was his doing. To Roger’s credit, though, he has a good eye for style and the parts he chooses – as diverse and off the wall as they may seem – usually come together to create a much more cohesive whole. 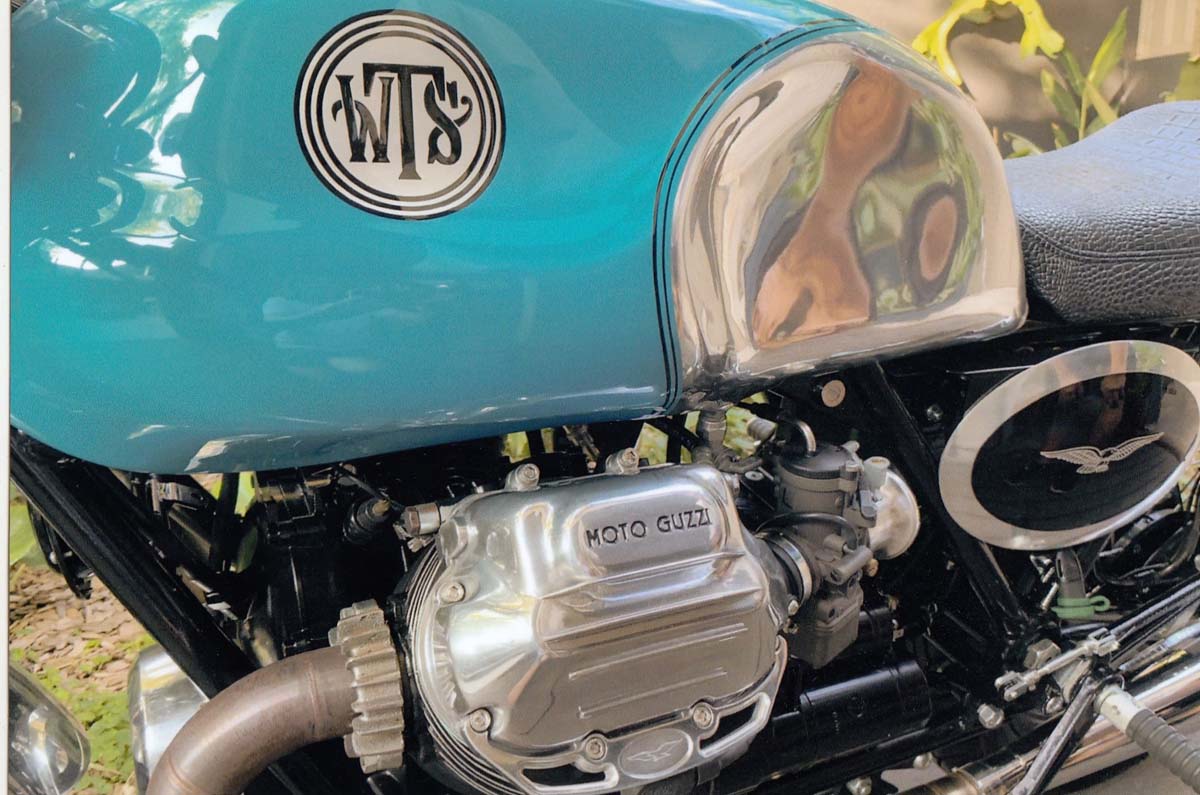 Back in 2018, some of the planned parts for this custom included a Guzzi LeMans fairing, new 18-inch wheels, Dresda Triton seat and lots of alloy-look finishes, along with all the usual café racer bits. Roger explained that most of those made it to the finished article, but there were some changes along the way.

Jeremy started the project by stripping the Guzzi down to its frame and sending the spoked rims off to Ash’s Spoked Wheels for rebuilding, while some frame strengthening and modifications were made to take the custom tinware.

The rear rim was replaced with a unit that was wider than factory, but the old school wire spoke look was retained. Ash’s then powdercoated the refurbished front and new rear rims, relaced them with stainless steel spokes and wrapped them in Metzeler Lasertec tyres. 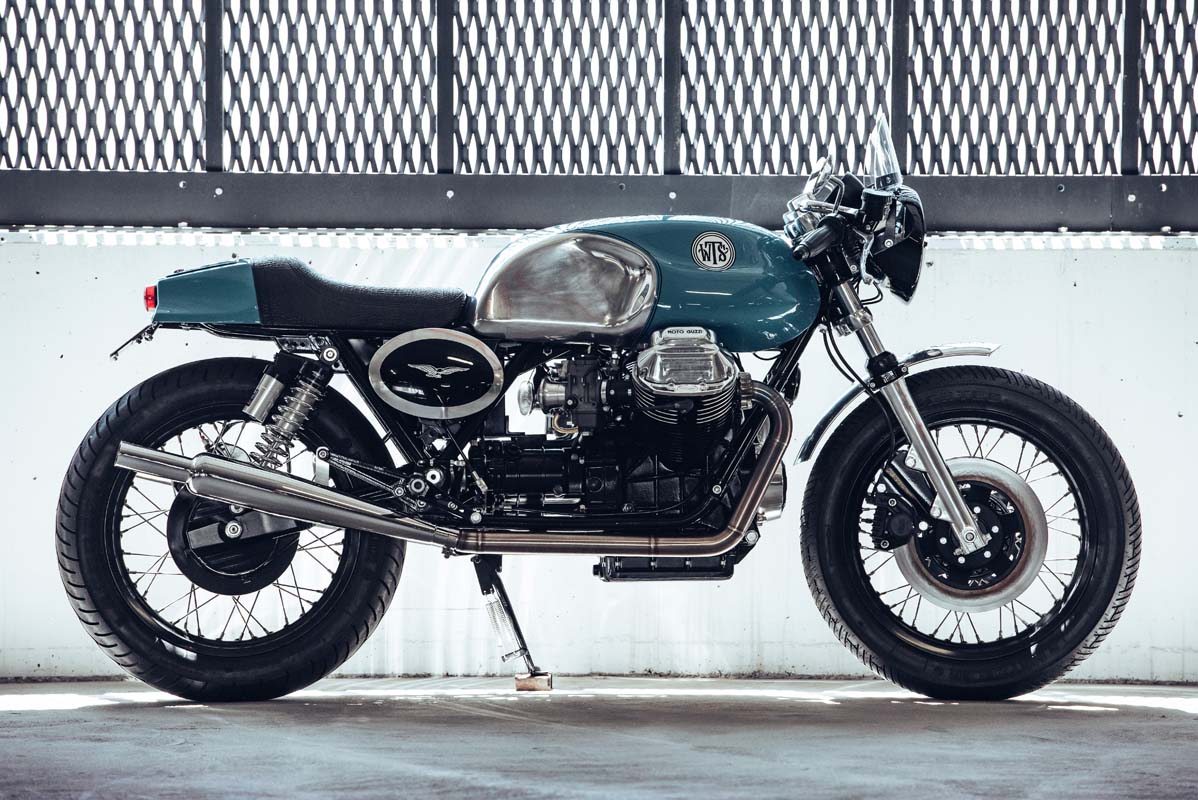 To give the café racer the right stance, the suspension came next. The factory rear shocks were replaced with equivalents from Italian company, Matris, which Terry at Shock Treatment in NSW fine-tuned to suit the project’s needs. Up front, the factory forks were retained, but new internals were fitted and the outer tubes were shaved. 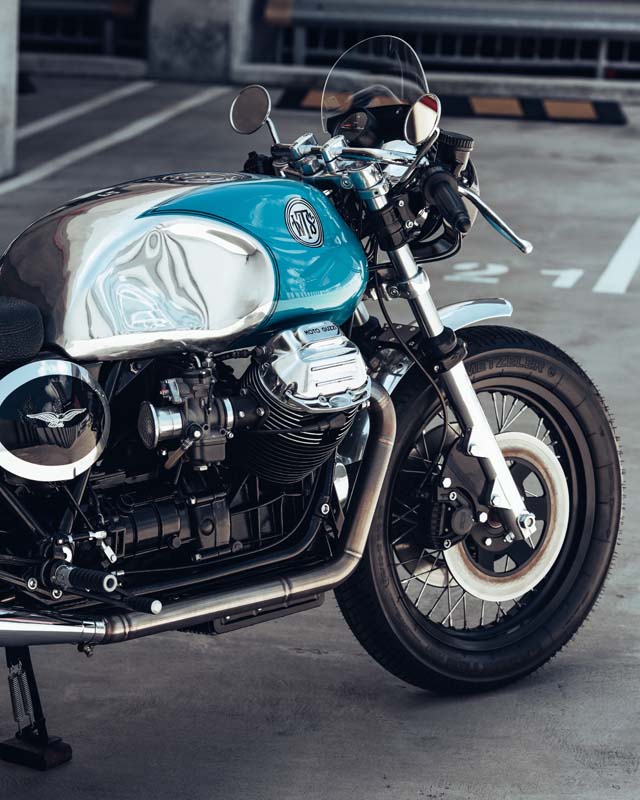 Café racer looks are no good without some café racer performance, right? Roger thinks so, too, so the transverse v-twin was given a tickle in certain areas, starting with the inlet side. Carbies are the same 30mm Dell’Ortos fitted to a factory 850 T3, but with velocity stacks added. On the exhaust side, the factory pipes were replaced with a bespoke set of headers fabricated by Hi-Tech Mufflers and made to fit a pair of BSA Goldstar mufflers. 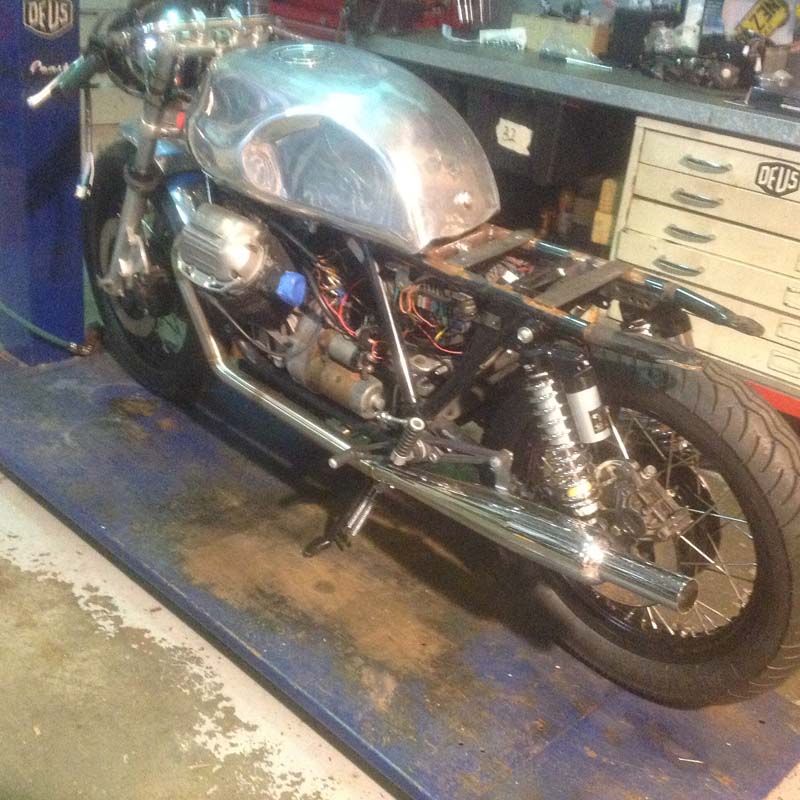 How much more grunt these mild changes add to the factory 68.5hp (51kW) and 54.2ft/lb (73Nm est.) from the Moto Guzzi’s 844cc v-twin are unknown, but Jeremy’s tweaks are sure to have unleashed a few extra horses!

All new brake discs, calipers and lines were fitted, too.

The Dresda Triton seat unit would have to be the rarest part of this build. Fortunately, this hard-to-find item has been part of Roger’s parts stash for 30 years. Seeing it on the bike was the easy bit, though. Making it fit proved much harder and it’s here where Jeremy’s skills came to the fore.

Just as tricky was incorporating a set of Triumph Thruxton sidecovers, which Jeremy understatedly said took “a little persuasion”!

The headlight fairing is from a Manx Norton, while that big bold fuel tank is a brand-new unit sourced from Stein-Dinse, who offer a range of gear to suit classic Moto Guzzis and have an Australian outlet based in Victoria.

While the temptation may have been to keep this long-range tank entirely in beautiful polished bare metal, Roger had other plans.

With the project nearing completion, details like painting and powdercoating came next, with various small parts sent to Precision Coating Services, while others, like the engine valve covers and alternator cover, were polished in the Deus workshop.

Painting was trusted to Dutchy’s Motorcycle Spray Painting in NSW (a partner in Deus projects for the past 10 years), but it was Roger who picked the colours.

Showing his passions extend beyond two wheels, Roger selected a Porsche colour called Miami Blue for the fuel tank and seat unit. It’s an unusual, almost turquoise shade, but it suits this build right down to its black powdercoated rims.

Dutchy also applied the tank badge – with the semi-script ‘WTS’ logo in the style of the AJS logo. WTS, by the way, stands for ‘Westlake Tagand Special,’ reflecting the two forces that drove this bike’s creation. 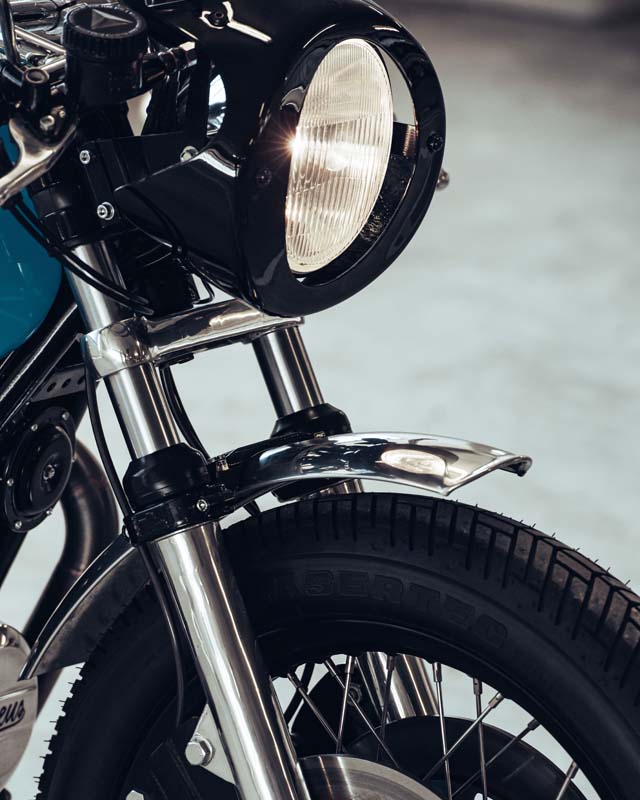 Finishing touches include Atto DF rear indicators that are almost as subtle as the Kellerman front blinkers, a genuine crocodile skin seat cover (by Badarse Trim Co.) and an Acewell speedo. 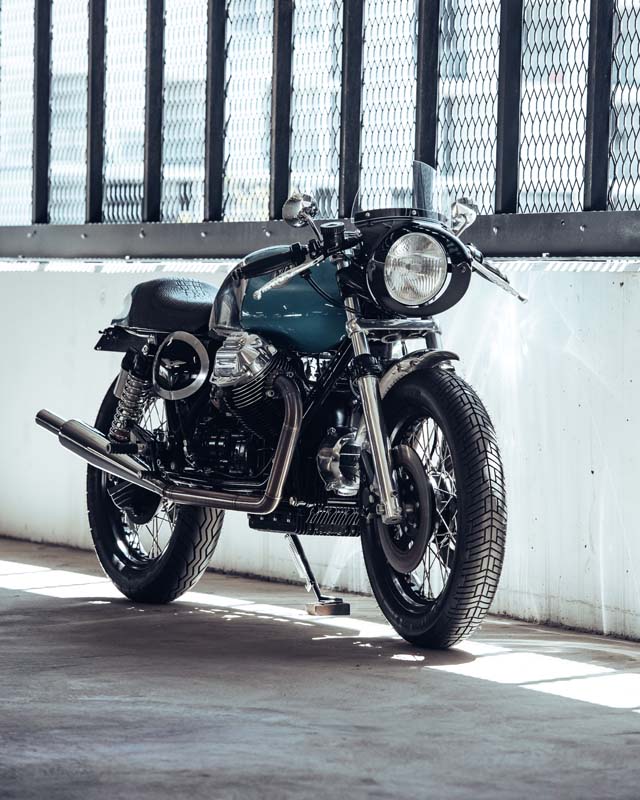 With 2021 being Moto Guzzi’s centenary, don’t be surprised if plenty of Guzzi-based customs like this one roll out of workshops worldwide this year. However, Jeremy completed this build in 2019, which means that, like on so many other occasions, he was ahead of the curve!

If you’re thinking of joining the ‘Guzzisti’ this year with a custom creation, you could commission your own through Deus. Or pick up this one, as it’s for sale (see below).

As a fast track into custom Guzzi ownership, they don’t come much bluer, brighter, blingier or better than this!

Special thanks to Jeremy Tagand at Deus ex Machina for assistance with this article.

Roger’s creative spirit is always restless, so a few months after the ‘WTS’ Guzzi was completed, he decided to offer it for sale and focus on the next project.

This one-off bike is on the market for $33,000 and was on display at Deus’ Camperdown HQ at time of writing.