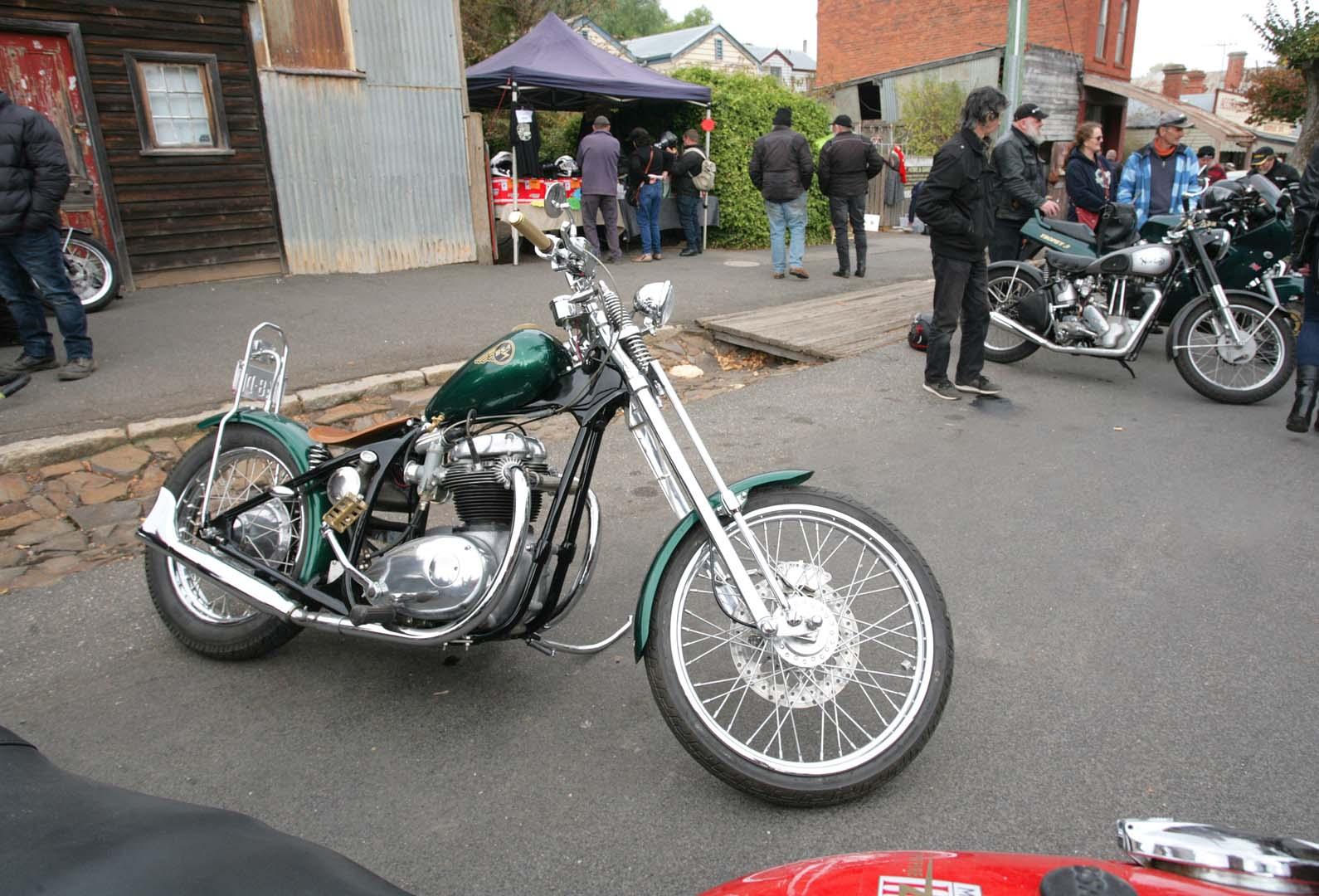 Custom choppers based on BSAs, indeed any British bike, are a rare sight. Café racers, yes, bobbers, sometimes, but choppers, no. As such, when a BSA-based chopper pops up, it attracts attention. Such was the case with the example pictured – Hard Luck - a BSA Thunderbolt 650 twin that was spotted by JUST BIKES at the 2019 All British Rally. 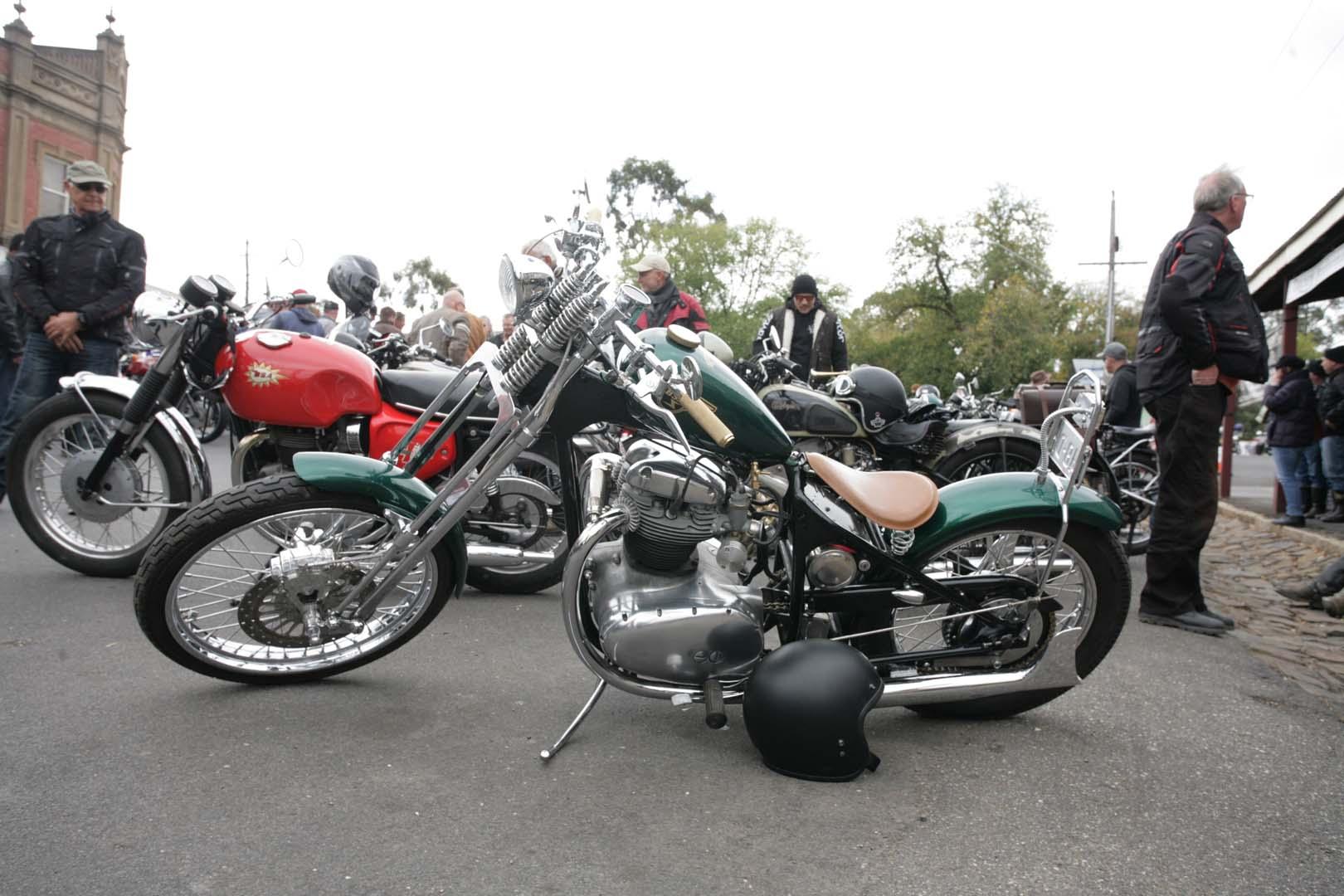 Although this bike was purchased by Dave North in 2016 and the build completed only last year, its history as a custom chopper goes back much further – back to the 1970s, in fact.

Dave’s a product of Kerang in northern Victoria and it turns out this bike was, too.

“A local guy I knew had it in town 42 years ago,” Dave explained. “It was parted out some years later and sat untouched for a good 30 years.”

When Dave was made aware of it, little more than a rolling frame was left and the remains were sitting abandoned on a farmer’s scrapheap.

Dave’s first motorcycle was a Honda postie bike and he’s owned and restored a few other old Hondas over the years. He’s also been into cars, having restored and modified Monaros and Falcon coupes in the past.

If you’re thinking that background doesn’t lead to a BSA chopper, you’d be right, but Dave’s also restored and customised an Austin-Healey Sprite, so has something of an affinity for British classics, too.

The BSA wasn’t selected for its British origins, though. The bike – or what was left of it – was a project Dave could see some potential in, while the price made it too good to pass up.

When told it was just $50 – that was enough to seal the deal.

“It was looking sad and needed another go at life,” Dave added. 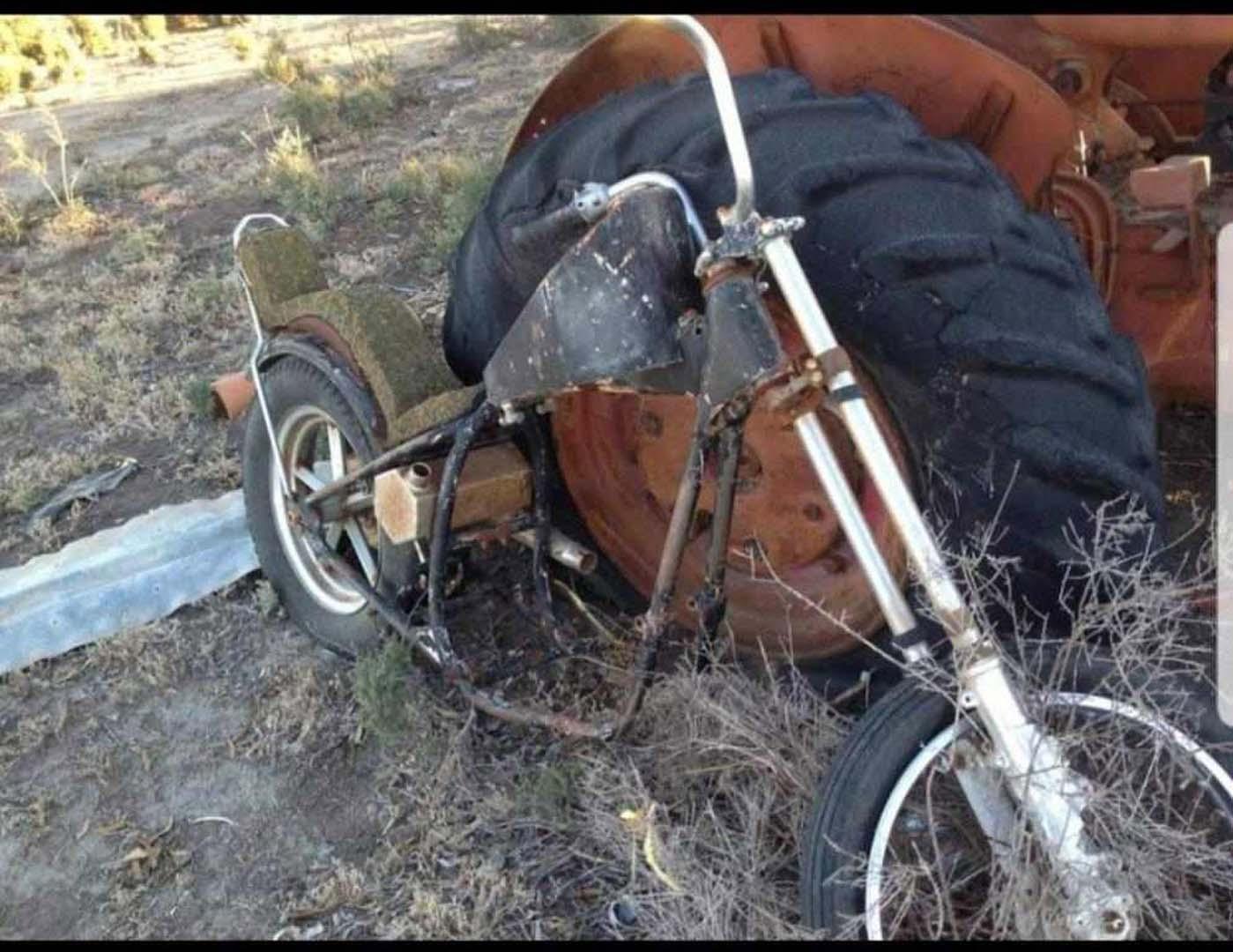 What Dave’s $50 had bought him was a modified ’67 BSA A65 frame and not much else. There were a pair of tele forks and mini ape hangers attached, along with a shabby pair of wheels, hexagonal oil tank, peanut-style custom fuel tank and the remains of a classic ‘king-and-queen’ chopper seat on the hardtail rear.

Being somewhat familiar with this bike and its backstory, Dave knew what he’d purchased wasn’t what this chopper looked like back in its glory days, and tracking down some original photos confirmed this.

Back then, the bike wore a girder fork on its raked front end and had been converted to a rigid rear. There were compact Z-bar handlebars, a mix of BSA and Harley-Davidson wheels, custom lights and its most striking feature – metallic pearl pink and purple paint.

Obviously, a lot of time and effort had gone into the build back then, but with all those unique elements either removed or replaced over the decades, what Dave had bought was a frame in primer, no engine, an alloy rear rim and a front rim denuded of many of its spokes.

What Dave had also bought was a challenge, but he was up for it, and with most of the tools and equipment he needed in his workshop, he could do the entire project from home. 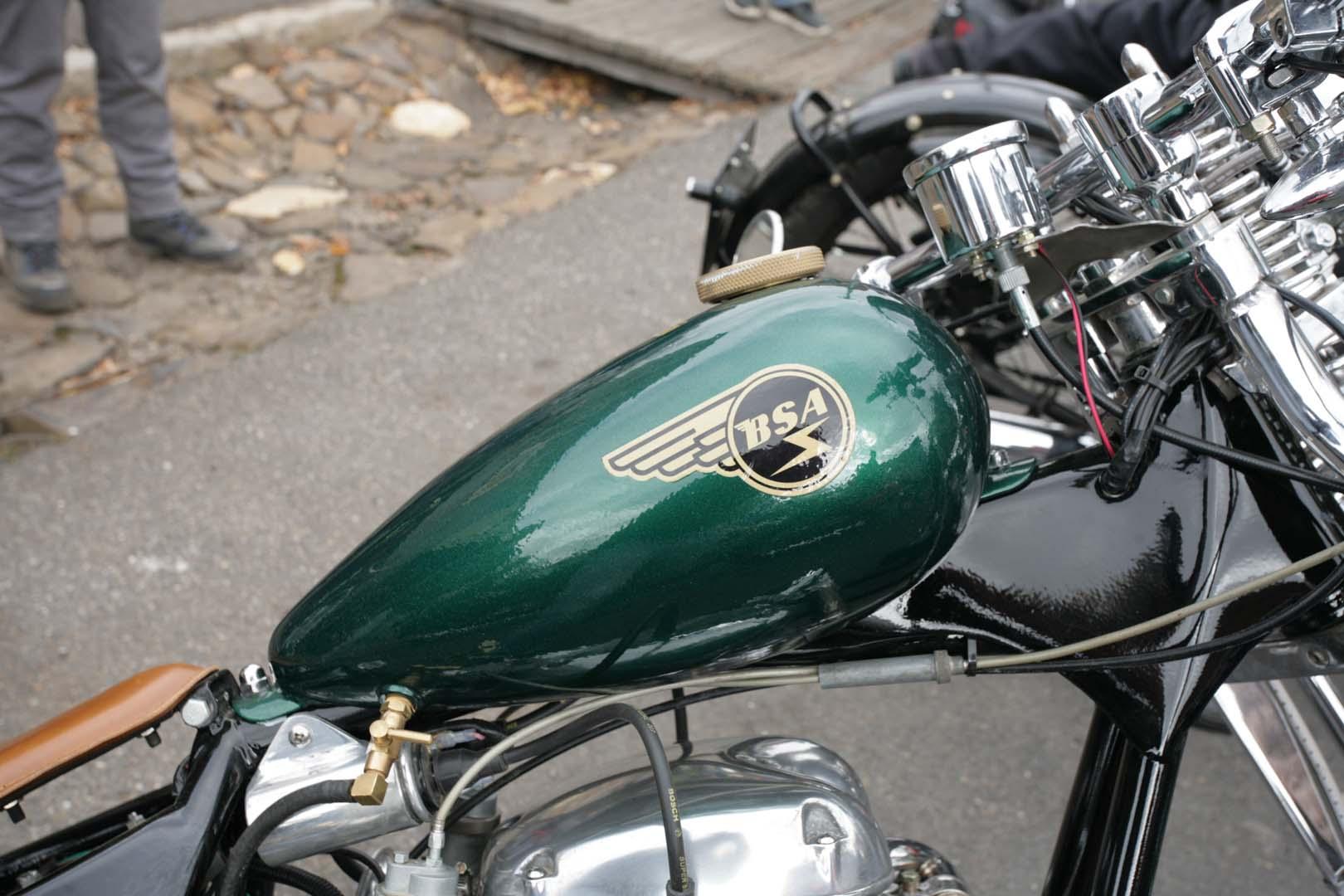 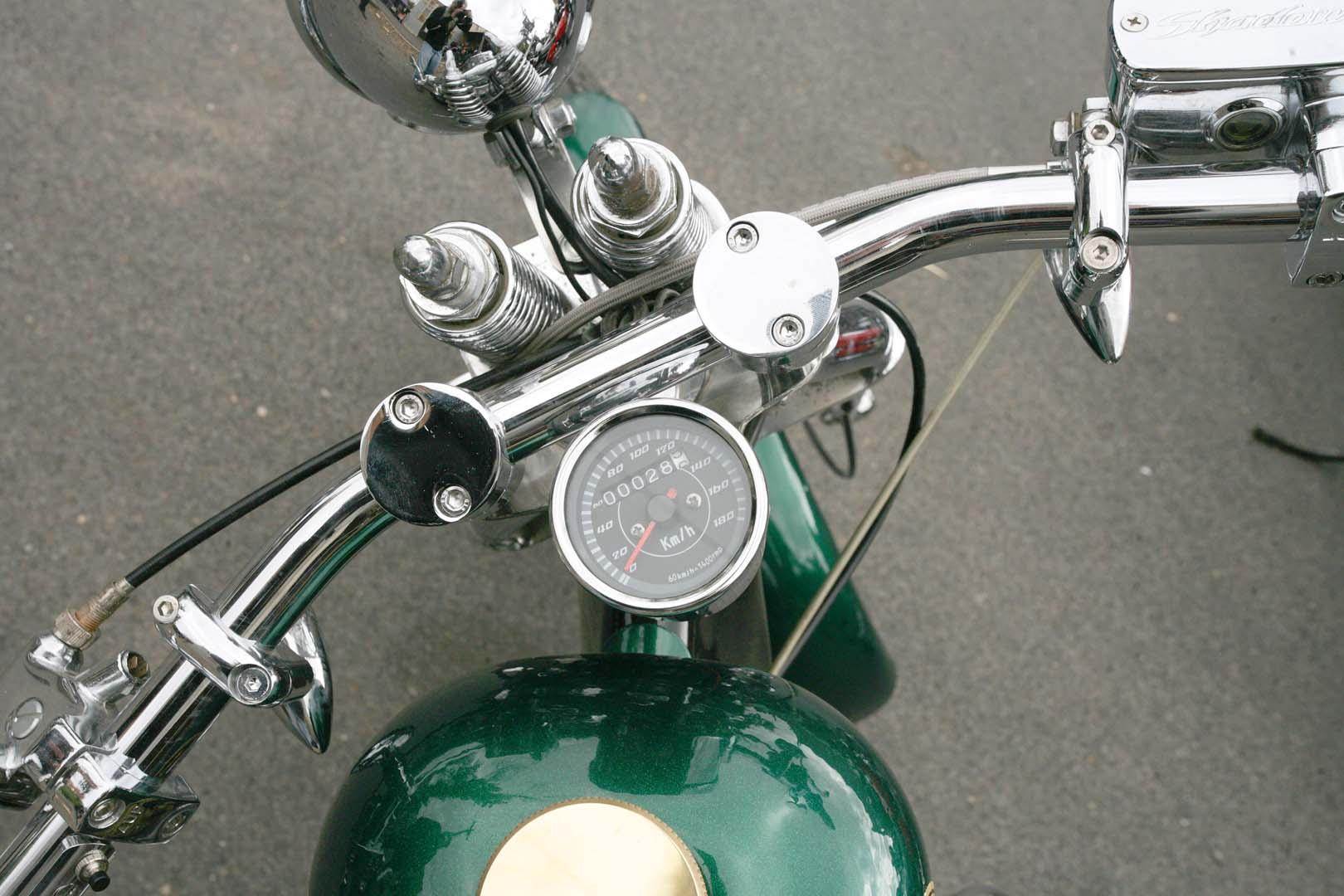 While the frame was solid enough to build on, virtually none of the other pieces on the bike could be re-used, so the search for replacements began.

Of course, there was the matter of finding a new engine, too.

Dave could have stuffed any parallel twin between the frame, or maybe even gone for a Honda four with some modifications, but there was appeal in this bike’s British roots, so Dave started searching for a period-correct, unit-construction 650 twin from a BSA A65, aka Thunderbolt 650.

Ultimately, that search led him to Ontario, Canada, and a solid, complete engine that was secured for a relatively affordable US$500.

Parts to suit that engine came from the UK, along with upgrades like a voltage regulator and Wassel electronic ignition.

The rear guard was solid enough to be re-used, as was the sissy bar, but everything else that had hung off the frame was replaced.

Some of these replacement items were sourced from Aussie suppliers, but most of the big-ticket items came from the US. These included the Billetproof Design fuel tank, oil tank, an Ultima disc front brake kit with 4-piston caliper, Billetproof Design drag bars and what’s arguably this bike’s most striking feature – that big springer front end from DNA.

Dave extended a big thanks to his mate, Chaie, who was a tremendous help in this process, tracking down all the parts needed from overseas. 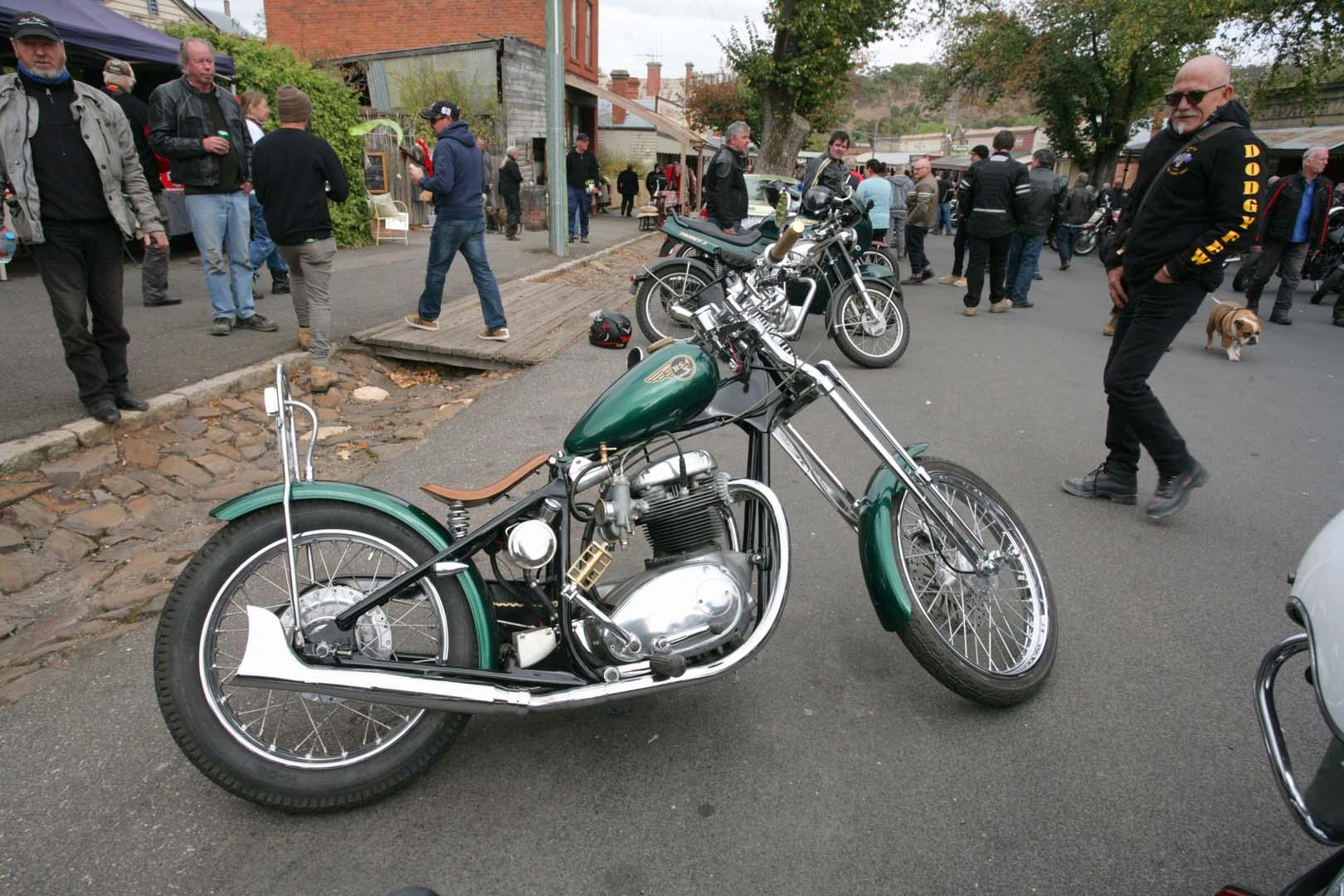 From the Ground Up

Before all this new gear was fitted, the frame gussets were checked and new webbing added, mainly around the seat base and headstem. Much of this had already been done for the original custom build and rigid conversion back in the ’70s, but hadn’t been done particularly well, so a fair bit of new metal was needed.

Provision was made for attaching a sprung solo saddle during this stage, as well as fitting the ‘Narrow Mustang’ fuel tank from Billetproof. A Sportster-style tank would have been the obvious choice here, but Dave was after something a bit different: a mantra he applied throughout this build.

For the engine, the internals were kept stock, but Dave added long pipes with a balancer and fishtail tips for the exhaust. The induction is handled by stock Amal 389 carbies, so output is the factory stock 49hp (36.5kW) at 7,000rpm.

As mentioned, electronic ignition was added for reliability, while Dave decided to modify the gearing for more bottom-end response.

Up front, that DNA springer front end was modified to suit the frame and topped with custom risers to match the Billetproof drag bars. Those bars were capped with Speed Dealer grips in knurled brass, while compact custom switchgear and internal wiring were fitted to keep the front end looking uncluttered.

To serve the same purpose, a pair of 3-inch peep mirrors, a small speedo, compact headlight and bullet indicators underslung from the bars were also fitted.

Dave says he deliberately chose brass for the grips to give this custom an old-school look and complemented that with other brass parts, like the fuel taps and tank cap, as well as the pedal for the kickstarter. 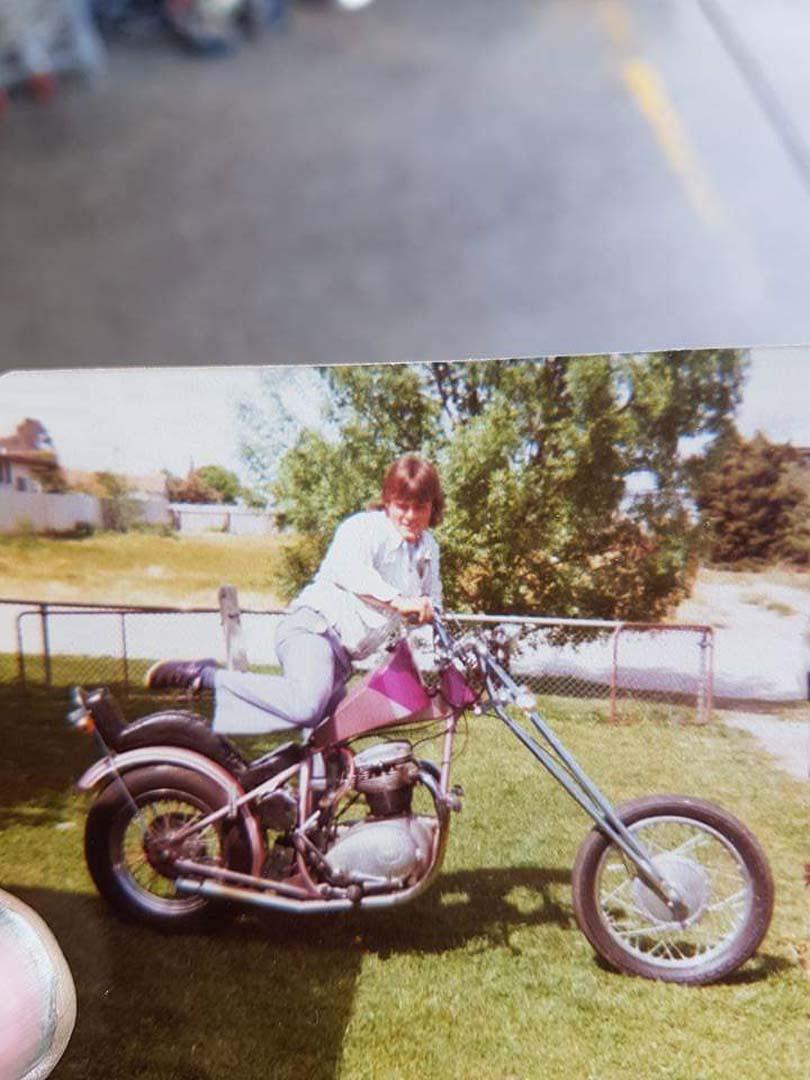 The wheels got a major makeover next, with a new 21-inch Harley rim up front and 19-inch BSA rim at the back, with new hubs fitted and thoroughly polished before classic-look Mitas tyres were added.

With the engine in place and new rolling stock fitted, the build was coming closer to completion, but there was still some work to do, including painting.

Dave laughs when he says a repeat of the chopper’s original pastel pink definitely WASN’T on the cards for the rebuild. Instead, he took inspiration from his Sprite’s British Racing Green when selecting a rich, deep green for the tinware. To the Lesonal basecoat, Gang Green metallic was added: a large metalflake paint that Dave calls a ‘Rat Fink Flake’. The flake doesn’t really come through in the photos, but can certainly be seen with the naked eye.

With the natural leather saddle, chrome and brass detailing, it’s a colour that really works. And speaking of brass detailing, complementary tank decals were sourced, including the ‘Hard Luck’ decal on top of the tank that has become the unofficial name for this custom. 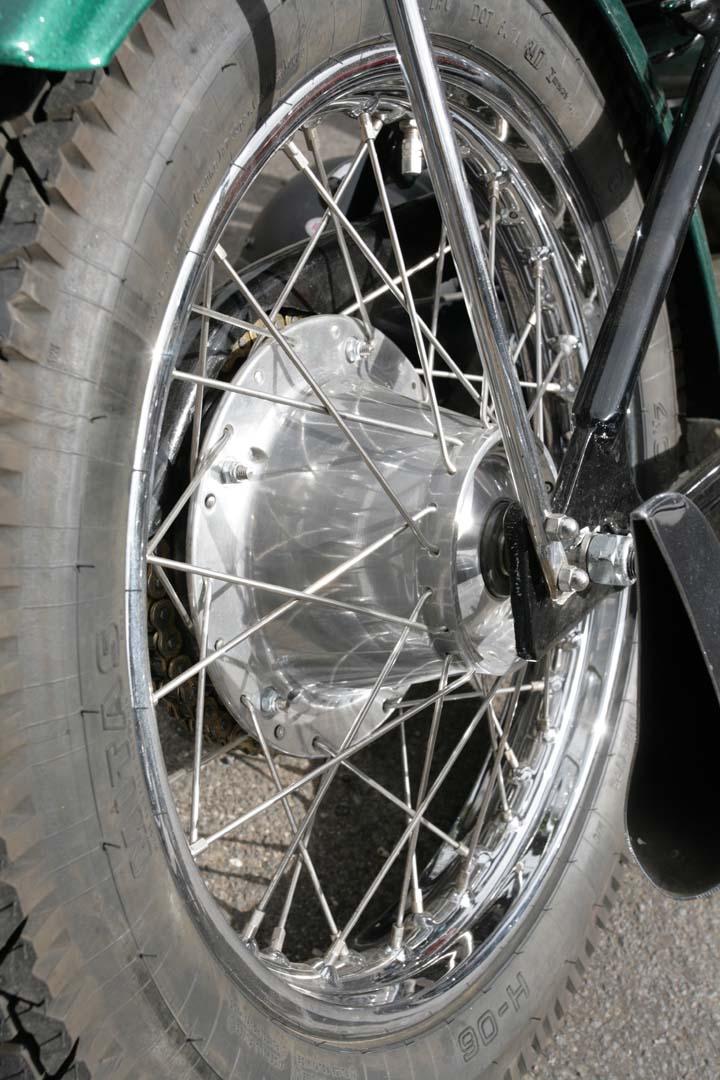 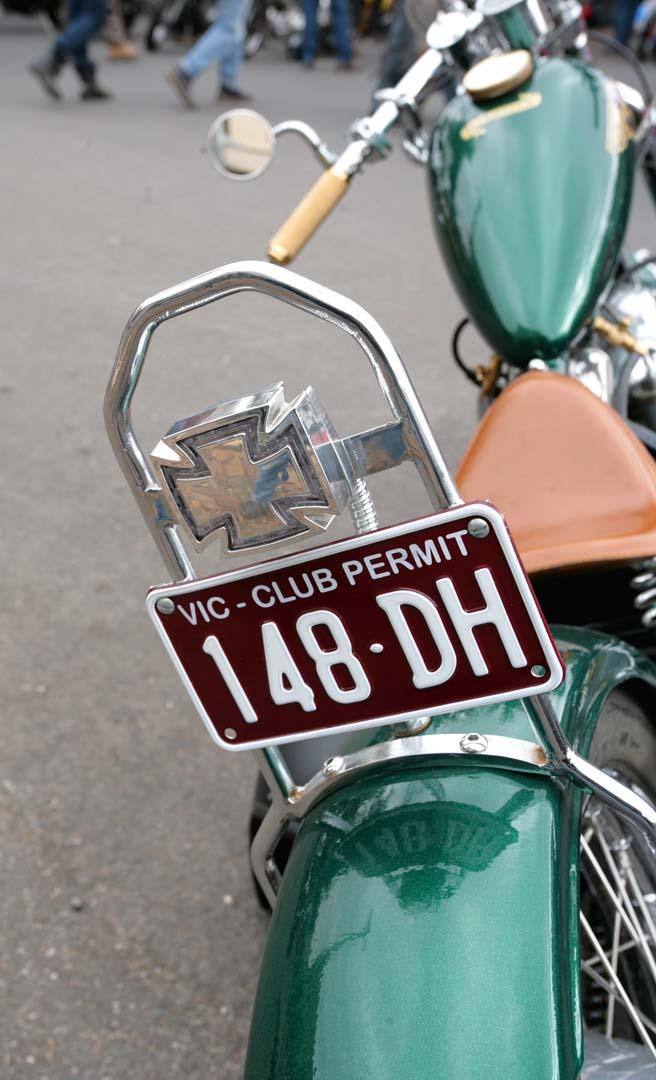 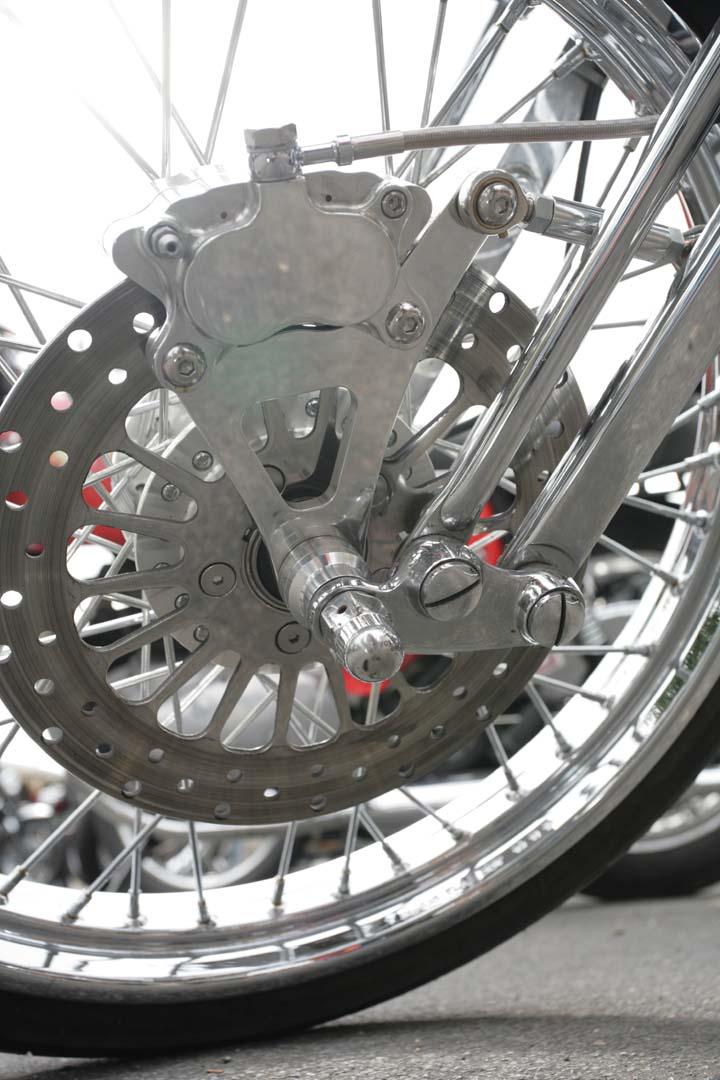 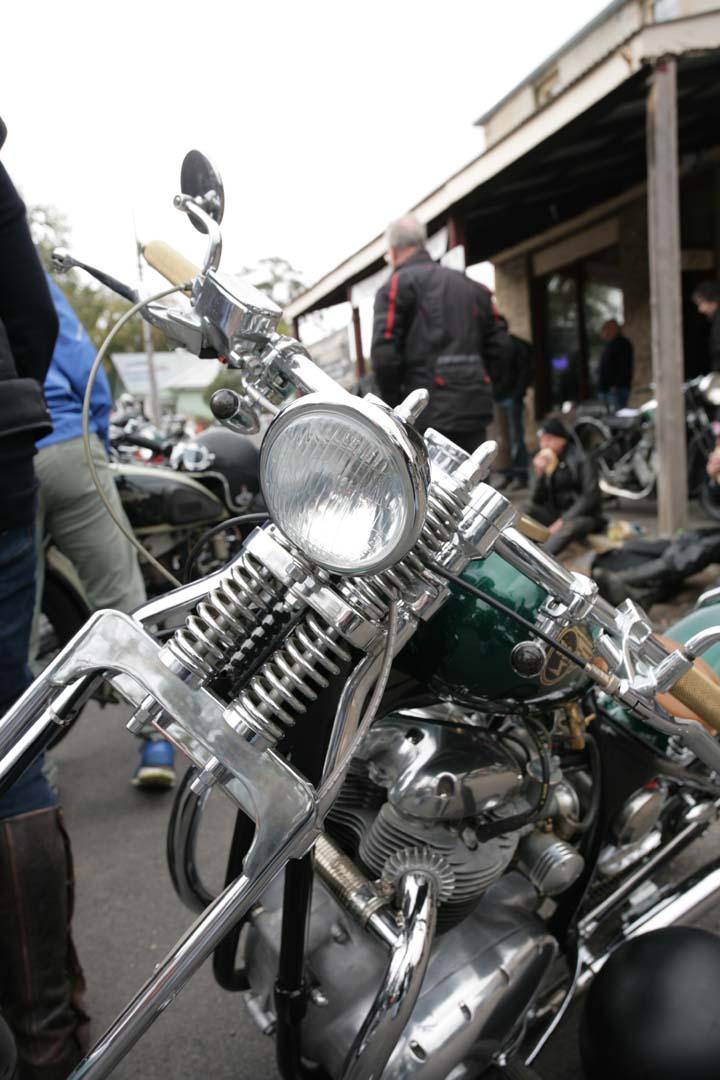 Since it was completed, this custom BSA has served Dave well on club runs and the bike show circuit. Aside from the 2019 All British Rally, other events this chopper’s been taken to include the local Kerang Show & Shine (held each April), where it won its class last year.

“It was a good fun build,” Dave recalled. “It turns heads and is a cool bike to ride.”

Given he’s put a fair few hours and dollars into it, there’s no chance of the bike being sold anytime soon. Instead, this build has actually given Dave a taste for more: “Now I want to find another one!”

With classic Hondas, Harleys and even a Vincent all on Dave’s wish list, there’s plenty to pick from, and if this bike’s any indication, the next project’s sure to be a head-turner, too. 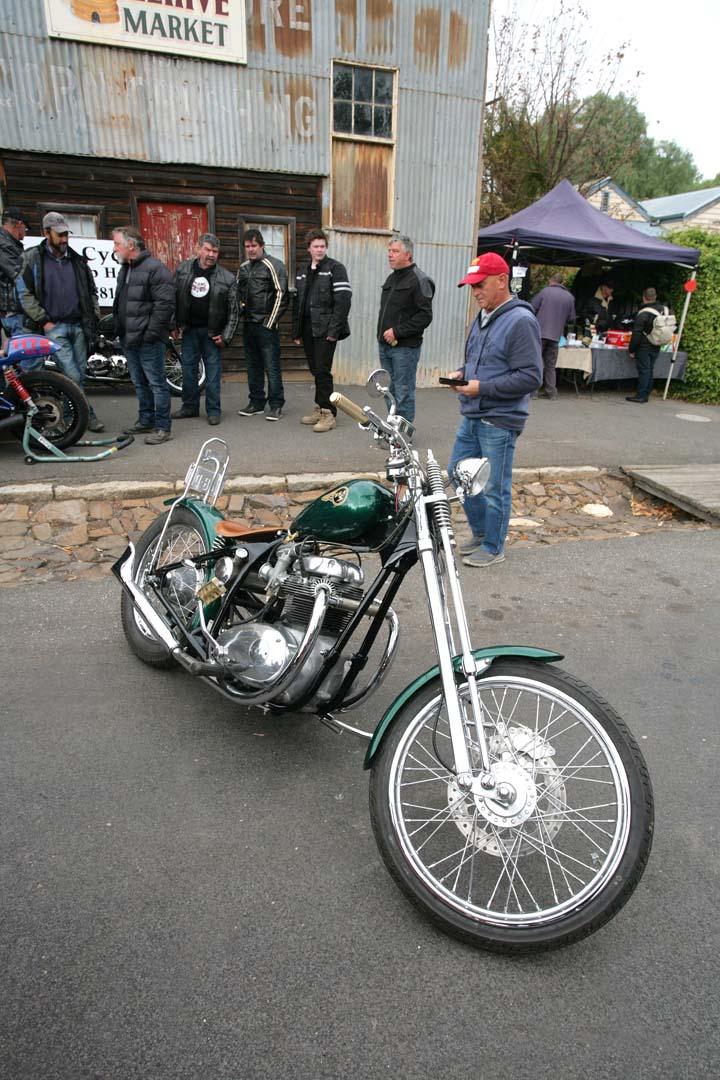 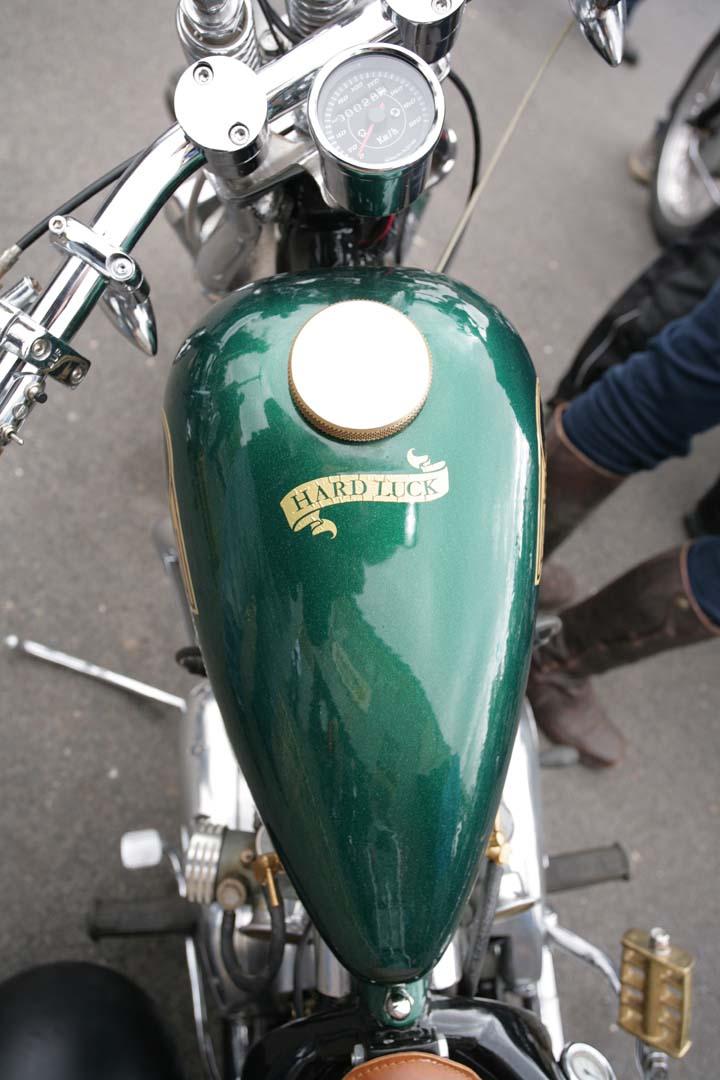 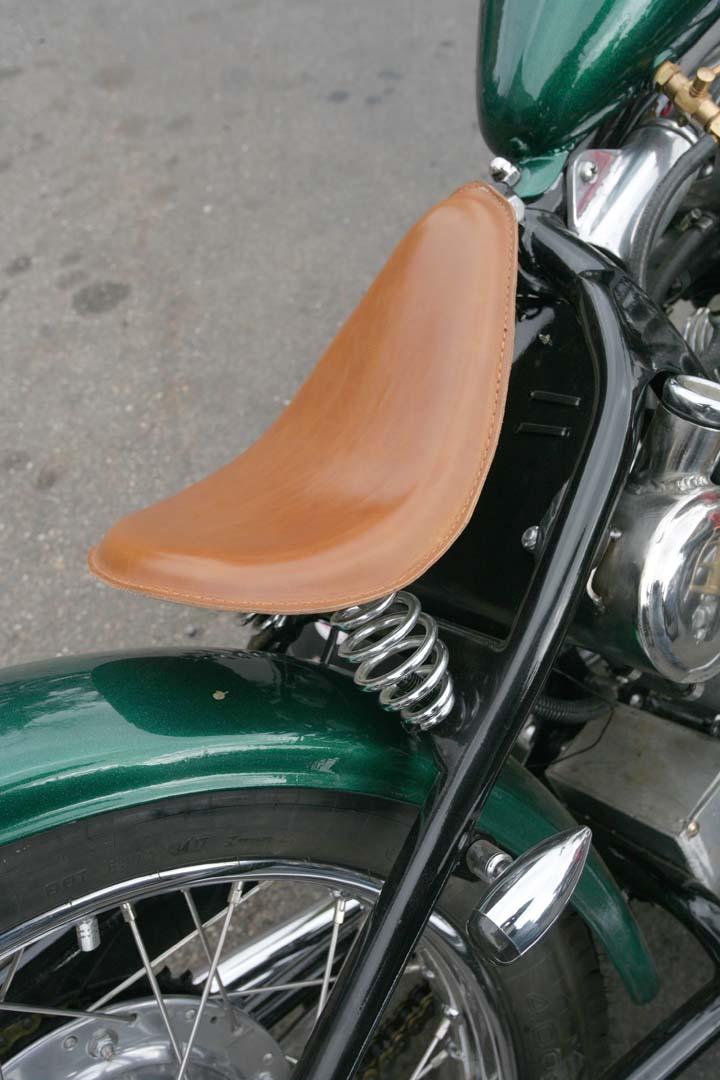 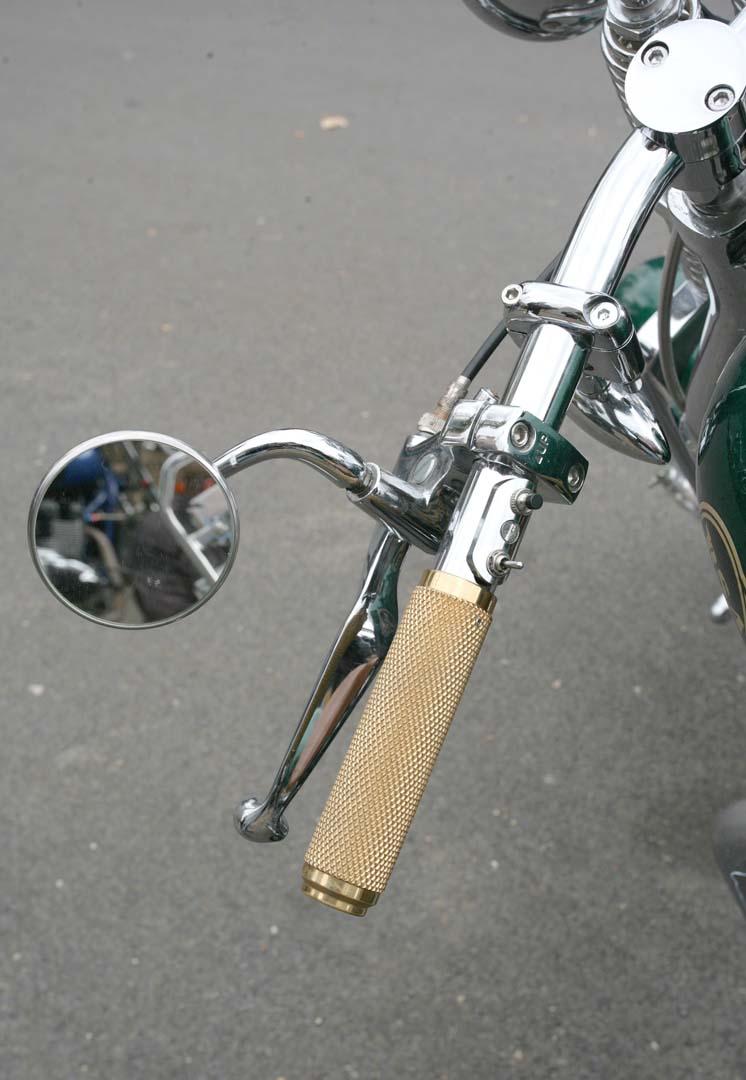 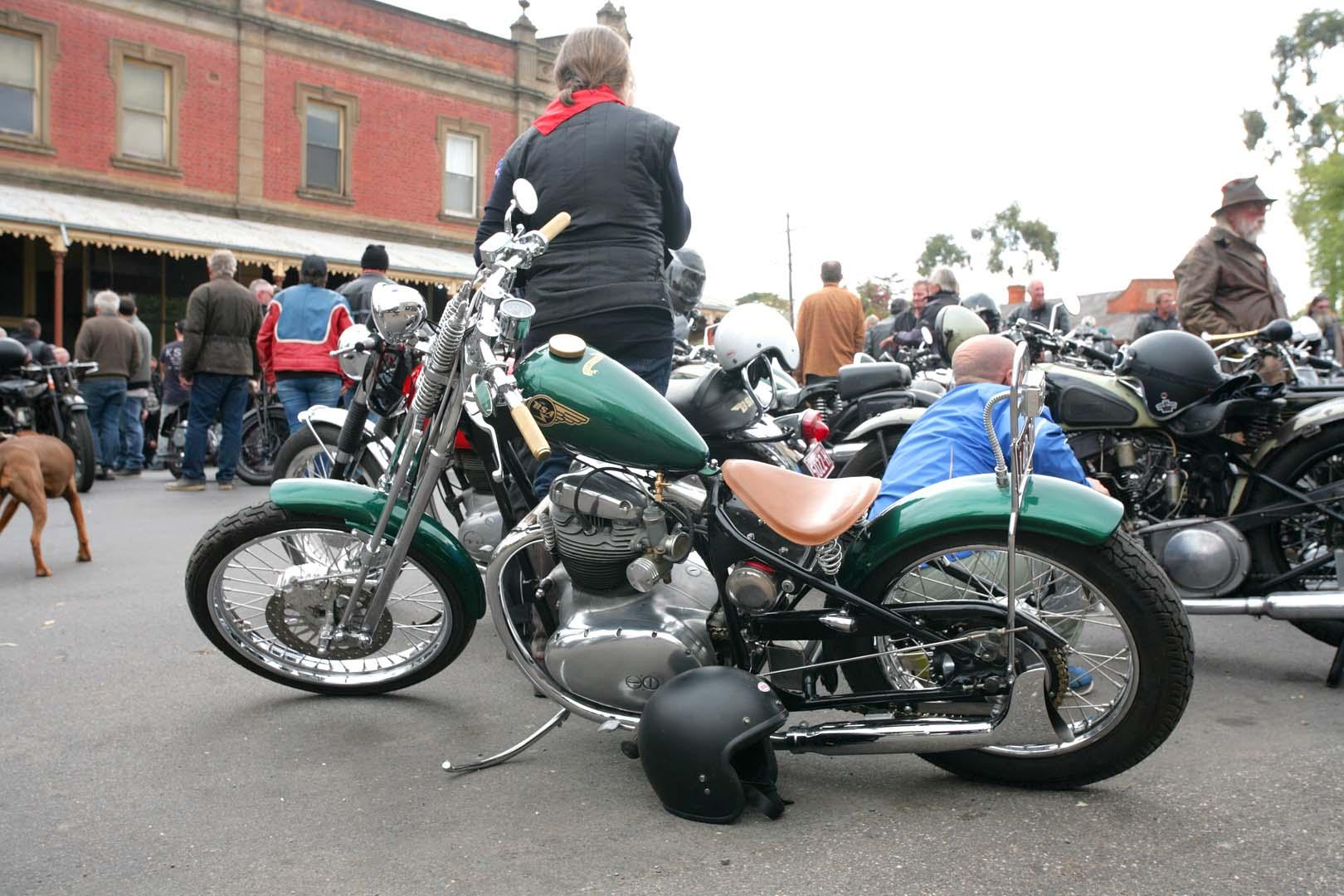