With components from three different Harleys and a hi-po automotive turbocharger, this Frankenstein creation is all about power!

When a custom-built motorcycle is named after an AC/DC album, there’s an obligation to make it worthy of the connection to Australia’s rock legends.

One look at the creation featured here, that Luke Crampton built for his brother Ben, makes it obvious that it’s not only worthy of the name ‘Powerage’, but worthy of closer inspection, too. 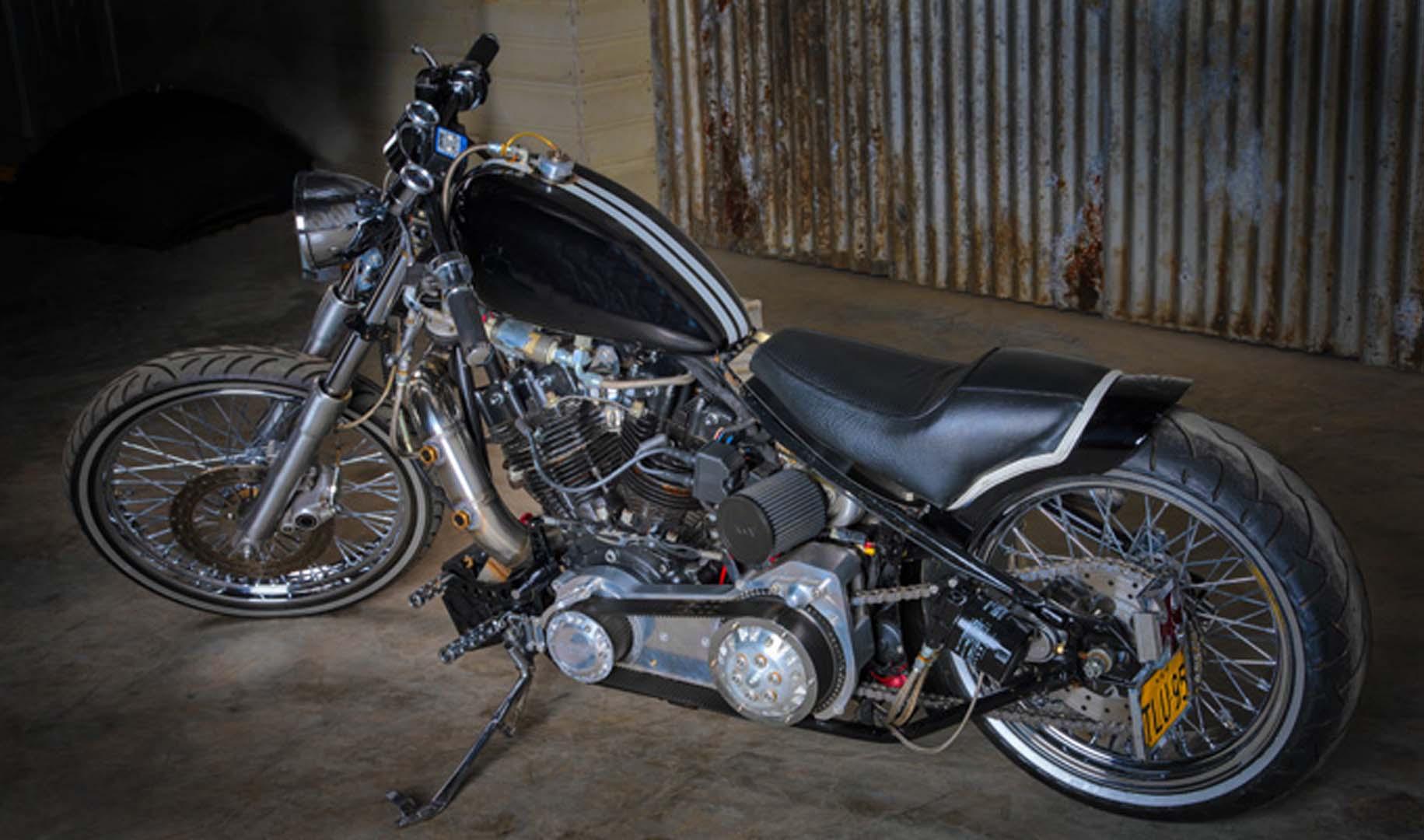 It may be one of the more underrated albums in AC/DC’s extensive catalogue, but 1978’s Powerage is the one that true aficionados of the band really appreciate. Some consider it the peak of the Bon Scott era and those that “get it” include no less than Keith Richards, so that’s an endorsement in itself, right?

Luke’s custom Harley is in the same mould. Those that understand the complexity of combining componentry from several different Harley-Davidson models – and a laundry list of other parts - will “get it” and appreciate the fact that Luke has not only made this thing, but made it work.

Yep, this Harley certainly does work and goes as hard as it looks. 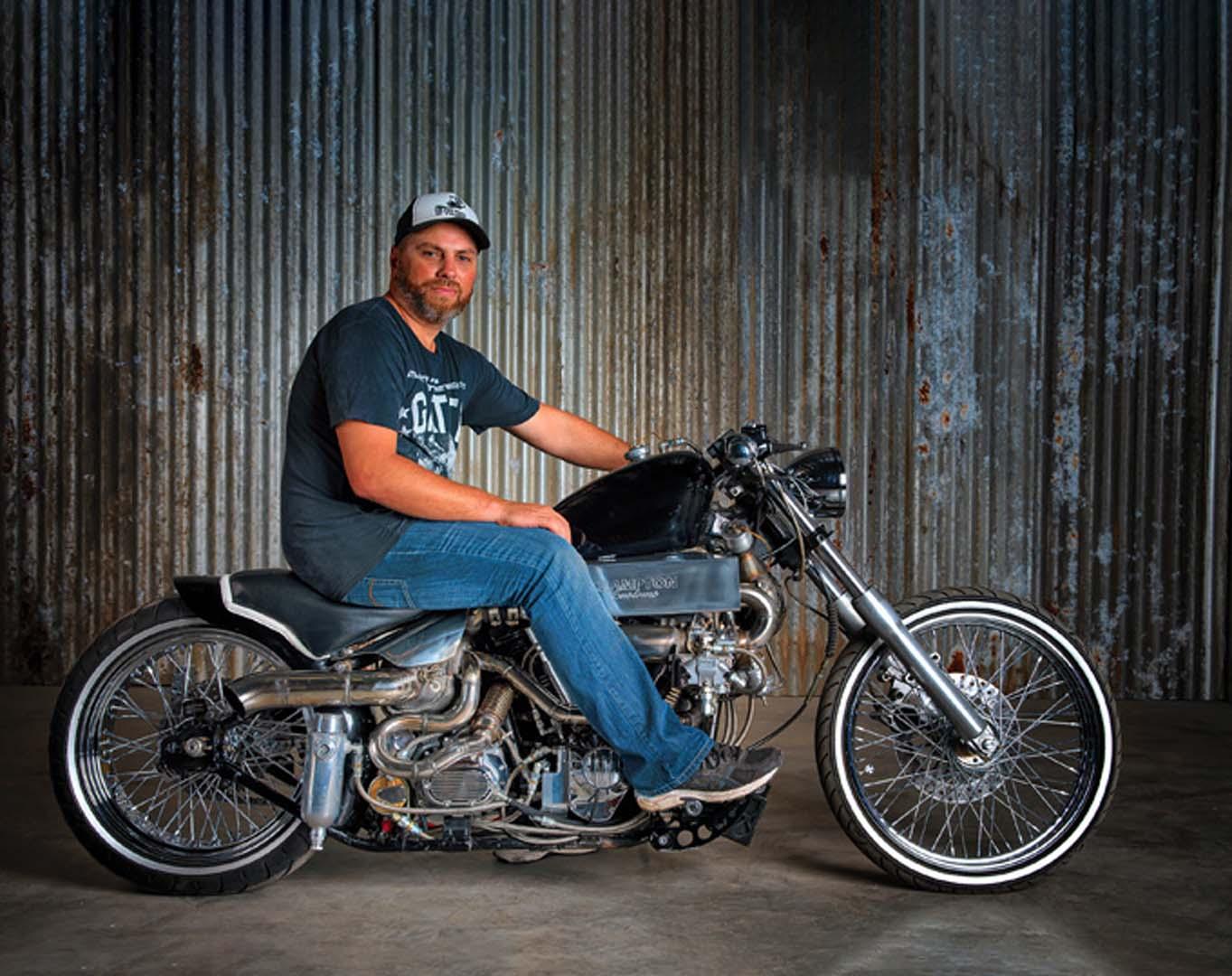 To make something like Powerage, it would have been easy to take a late model Softail and bolt on a bunch of parts from the H-D P&A catalogue, given the abundance of factory and aftermarket parts out there these days, but Luke likes to take a different approach.

Both Crampton brothers are based in the NSW Hunter Valley region: Luke’s a mechanic of long standing, firstly in the automotive trade and currently in the mining industry; while Ben’s a heavy equipment operator.

They’re both bike buffs, too, and have built and bashed plenty of motorcycles between them over the years. In the past 12 months, Luke’s taken that passion for creating weird and wonderful Frankenstein bikes - like this one – and made it more of a formal operation, trading under the ‘Crampton Customs’ banner.

Luke started building this beast for Ben about six years ago, but what he started with goes back even further.

The starting point for Powerage was a 1949 H-D FL big twin. As you probably know, an FL from ’49 would have rolled out of Milwaukee with the Panhead engine that had been introduced the year before and the new-for-’49 hydraulic fork, replacing the springer front end.

However, the Frankenstein nature of this build means that only the FL frame remains, with even that coming in for modification: the rake has been kicked out 5 degrees for a chopper-esque stance and the front end – forks, triple trees, wheel and hub – has been replaced with components from a ’96 Dyna Wide Glide. 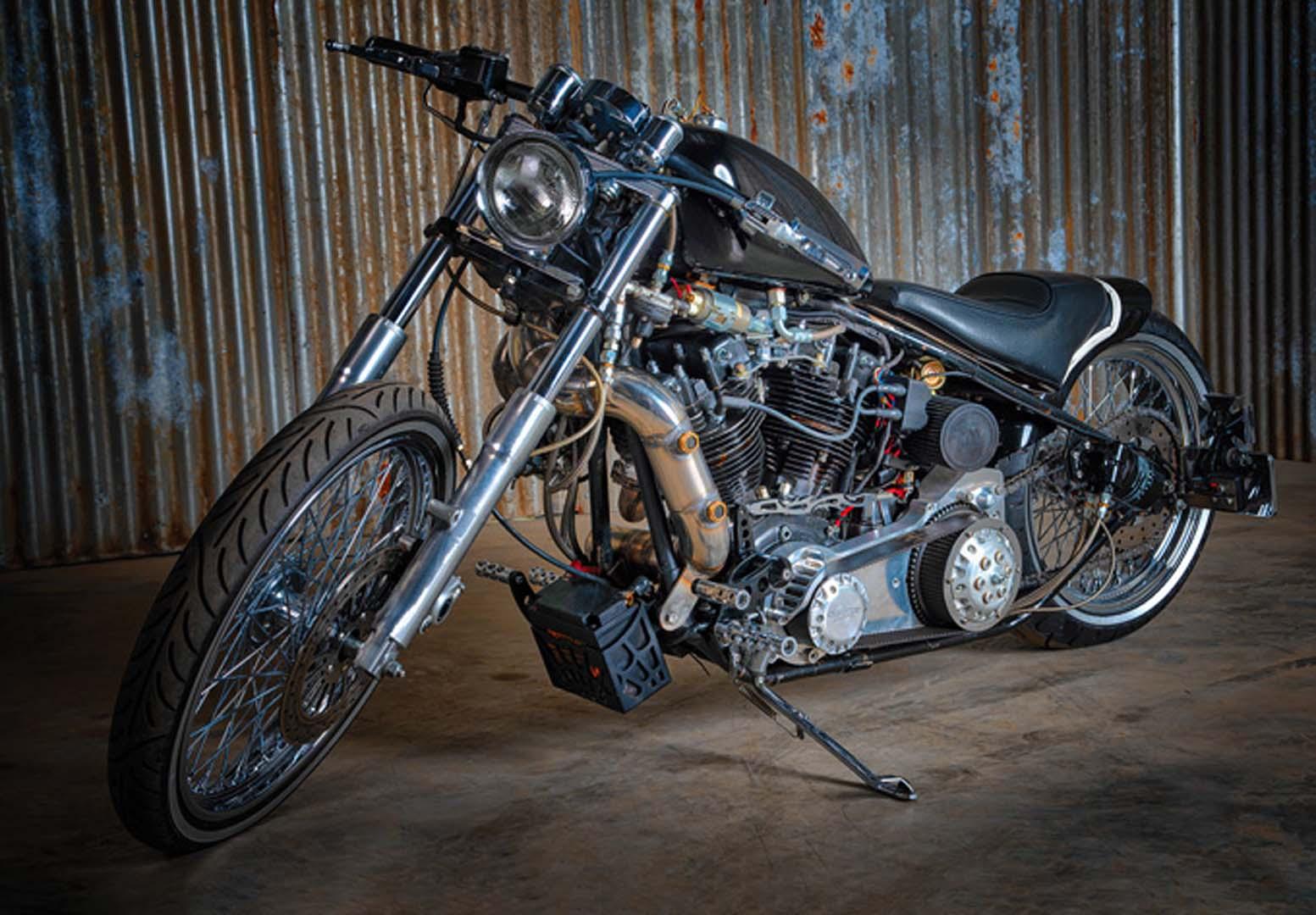 Like the front end, the engine in Powerage ain’t from 1949, either. It’s actually a 1976 Harley 1200cc (74ci) Shovelhead motor that Ben understatedly describes as “heavily modified”.

A 1380cc (84ci) Big Bore kit has been fitted, along with solid lifters, S&S pushrods and an Andrews J Grind camshaft. The compression’s been would up to 8.5:1, with a scratch-built intake plenum and exhaust added, too, but what puts the “power” into Powerage is the turbocharger.

A Garrett T25/28 hybrid turbo, originally fitted to a Nissan Skyline GTR, was repurposed by Luke for the project, with other mods including an intercooler out of a Mazda RX7 and a custom-made air duct.

Luke explained that the turbo has been set up to blow through the intercooler, entering the engine’s top end via an S&S carburettor modified with a fuel bowl and jets from a 4-barrel Holley automotive carby. This helps overcome potential flooding issues, due to the boost pressure overwhelming the floats in the bowl.

An accelerator pump has also been fitted and is activated via an arm off the throttle linkage, while an MSD fuel pump delivers the juice, controlled by a Malpassi fuel pressure regulator.

Fitting the turbo and all its related plumbing meant some lateral thinking had to be applied to other parts of the bike.

With the turbo mounted under the seat, a H-D factory horseshoe oil tank wouldn’t fit and neither would a battery. The former has been replaced with a hand-made unit and moved to the front of the frame, with the latter now slung off the frame’s front downtubes.

If you’re thinking the turbo’s position would make the saddle pretty toasty, Luke counteracted this by fitting a stainless-steel heatshield under the custom-made seat pan. A turbo sock’s been added, too.

Further mods and additions include an oil filter mounted to the nearside rear of the frame, catchcan on the offside, an Exile Cycles sprocket brake, custom grips and levers, custom pegs and forward controls, plus a Sportster peanut tank. 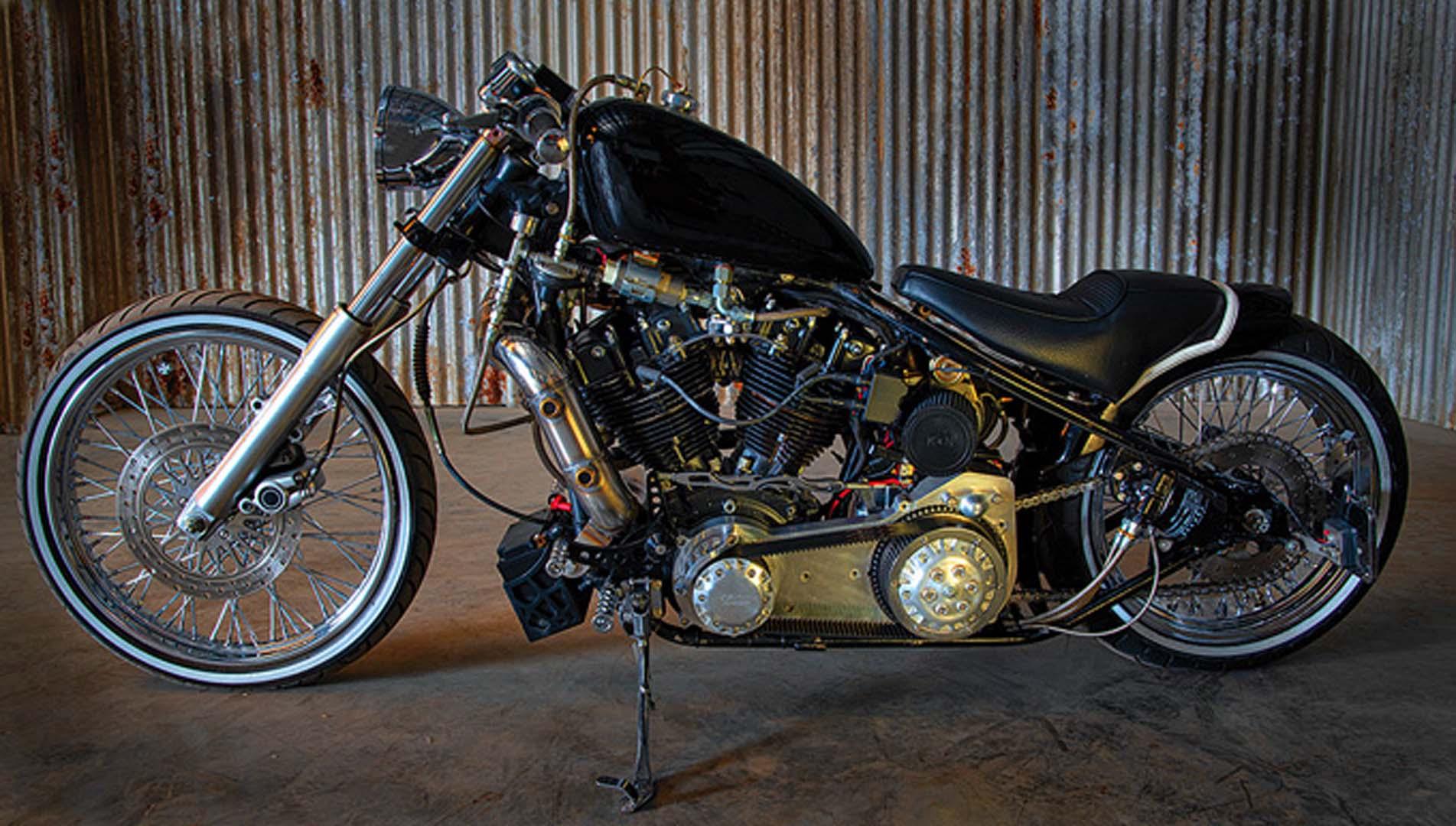 As you can imagine, Ben was pretty stoked with what Luke built for him (we should all have brothers likes this!), but we’re sure the question you’re all asking about Powerage is ‘Does it go?’. The answer is a resounding ‘Yes!’.

Boost pressure is set at 15psi for street duties, but Luke says this beast can handle up to 22psi on 98-octane without turning the v-twin into a grenade. Ben says the resulting power and torque is “impressive”, adding: “The turbo spools up early in the mid-range and pulls all the way to the 6500rpm redline.”

Tuning the bike was done the old-school way - no dynos and complex equipment. Simply ride for a bit, stop, adjust with spanners, screwdriver and timing light, then repeat!

Keeping the pin in the grenade is a programmable Dynatek ignition control module with dual stage rev limiters, which is part of a dash that includes boost pressure and air/fuel ratio gauges flanking the compact Dakota Digital instrument pod.

Power is sent to the rear wheel and its fat 180mm tyre via an open primary, 5-speed Ultima gearbox and chain final drive.

The front/rear 21/18-inch wheel combination is given an old-school look with 60-spoke rims and custom whitewall Dunlop tyres, while the seat trimming (the only outsourced part of this build) was done by Dave Witheridge at Withatrim Upholstery. 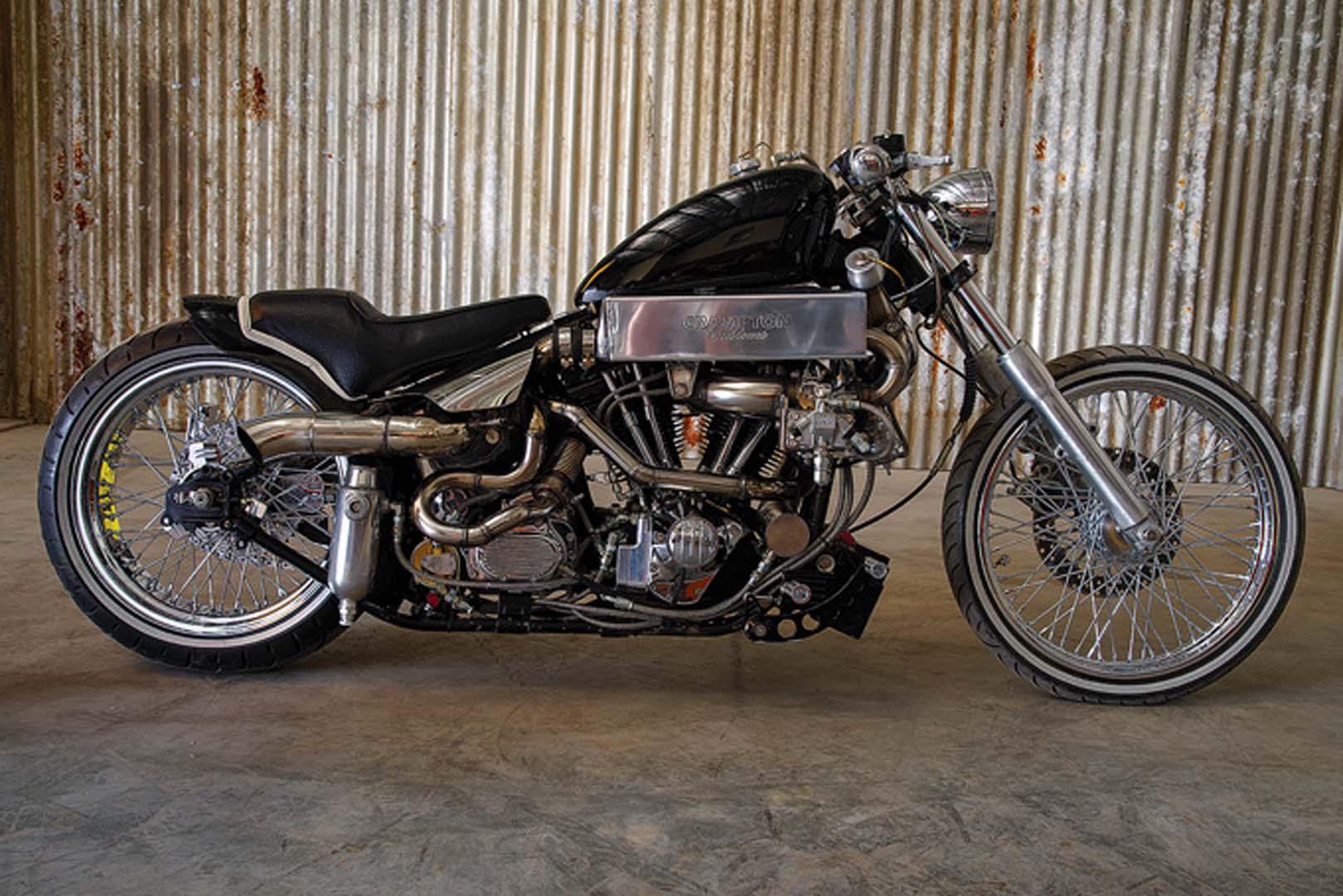 So how much did all this cost? Luke can’t really put a figure on the price of Powerage, but he can quantify the time this Frankenstein creation took to bring to life – six years.

Completed in January, 2019, the bike’s had a magazine feature and appeared at a few shows. It was

also entered into this year’s Deus Bike Build Off.

Powerage may not be a concours contender, but it was never intended to be. This creation was all about creating power – a goal that’s been well and truly achieved.

Another Crampton’s Customs creation, that’s arguably even wilder than this one, is a ’76 Yamaha XT500 that’s been supercharged, with a TT350 swingarm, Harley carburettor, a fuel tank modified from a beer keg and body work made up from cooking woks!

Watch this space, as we’ll likely feature this creation in a future issue of JUST BIKES, too. 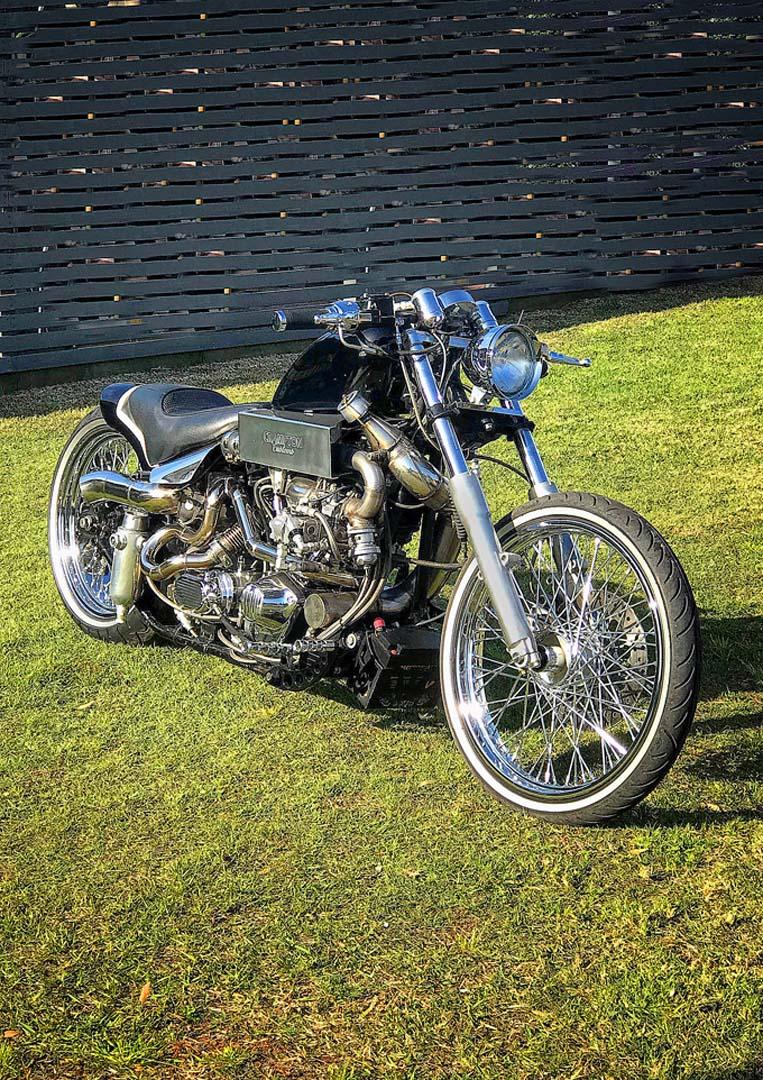