Before World War II, the biggest and ‘torqueiest’ Matchless you could get was the Model X.

Thanks to Harley-Davidson and Indian, v-twin engines are often thought to be the sole preserve of American motorcycle manufacturers. But there have been plenty of British-built v-twins, from the earliest days of the industry, right up to World War II. And we’re not just talking about Brough Superior and Vincent.

Well-known British marques like BSA, Royal Enfield, James, AJS and Francis-Barnett all produced v-twins for extended periods, as did a horde of other short-lived and long-forgotten marques. But as these models were mostly hooked up to sidecars, they didn’t attract the sort of attention that sporty singles did.

Matchless was in the v-twin market, too, and for a surprisingly long time.

To find the first catalogued Matchless motorcycle, you have to go all the way to back to 1901. Experiments in powered transport by the Collier family (father Henry, sons Harry and Charlie) behind Matchless had started a couple of years earlier, placing bought-in single-cylinder engines in all manner of positions on their bicycles before settling on the traditional between-the-frame placement.

At the very first Isle of Man TT in 1907, a JAP-engined single-cylinder Matchless, with Charlie Collier in the saddle, won its class. That led to the release of a TT model a year later, with a v-twin TT added in 1911. By the onset of World War I, Matchless’ range consisted entirely of v-twins. That trend continued after the war and it wasn’t until 1923 that a single returned to the lineup. 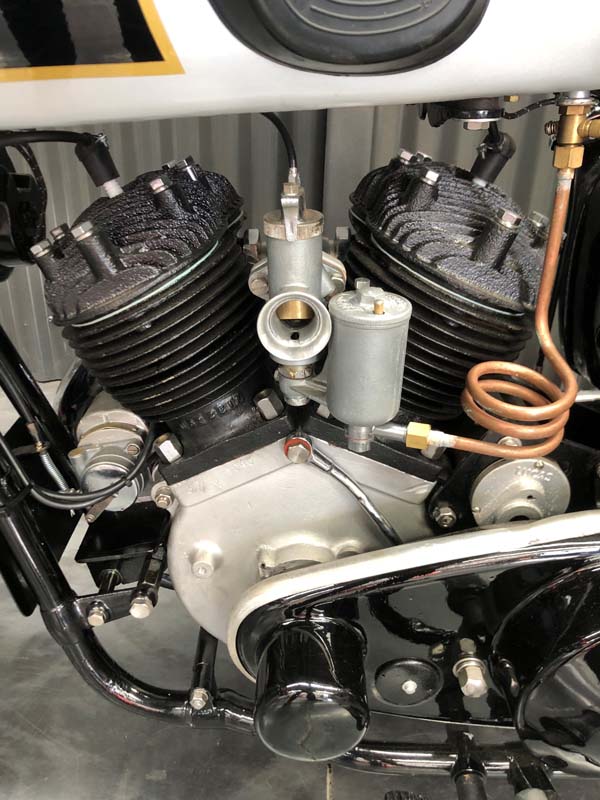 By this stage, Matchless were developing their own engines, with the bought-in JAP and MAG twins of the pre- and post-war period replaced by home grown units from 1925. Most followed a layout and a capacity that had been established previously, but an interesting deviation was the ‘Silver Arrow’ from 1929. With its narrow-angle, 394cc sidevalve v-twin and cantilever rear suspension, the Silver Arrow was innovative, but not particularly powerful, so its appeal to the sporting motorcyclist was limited. That, along with a high price, doomed it in the economically depressed conditions of the early 1930s. A V4 variant, the ‘Silver Hawk,’ was not a hit with buyers, either.

In the same year that the Silver Arrow debuted, Matchless revamped their conventional v-twin, renaming it the ‘Model X’. Powered by a tried and true sidevalve v-twin of 982cc capacity, the Model X never set the sales charts alight, but nevertheless kept plugging along, much like the bike itself.

Its ongoing success was due in part to its affordability, as even with a sidecar attached, the Model X was cheaper to buy than just about any new car available in Great Britain at the time. Of course, it was cheaper to run than an automobile, too. V-twins from BSA and Royal Enfield worked on the same principle – simplicity, affordability and reliability – and were designed primarily to haul sidecars.

Throughout the 1930s, the Model X went through mild changes, designated ‘X/2,’ ‘X/3’ and ‘X/4,’ while the proven reliability and performance potential of the engine saw it supplied to other makes, too, most notably Morgan, for their three-wheelers, and Brough Superior, where Matchless’ sidevalve v-twin formed the basis of the SS80, arguably the world’s first superbike. Matchless supplied most of the OHV v-twins used by Morgan and Brough Superior, too.

It was really the arrival of the Brough Superior that brought some glamour to the British v-twin, showing it could be much more than a sidecar lugger. Unfortunately, that spotlight rarely went beyond Brough Superior or Vincent, so Matchless v-twins remain mostly forgotten today. 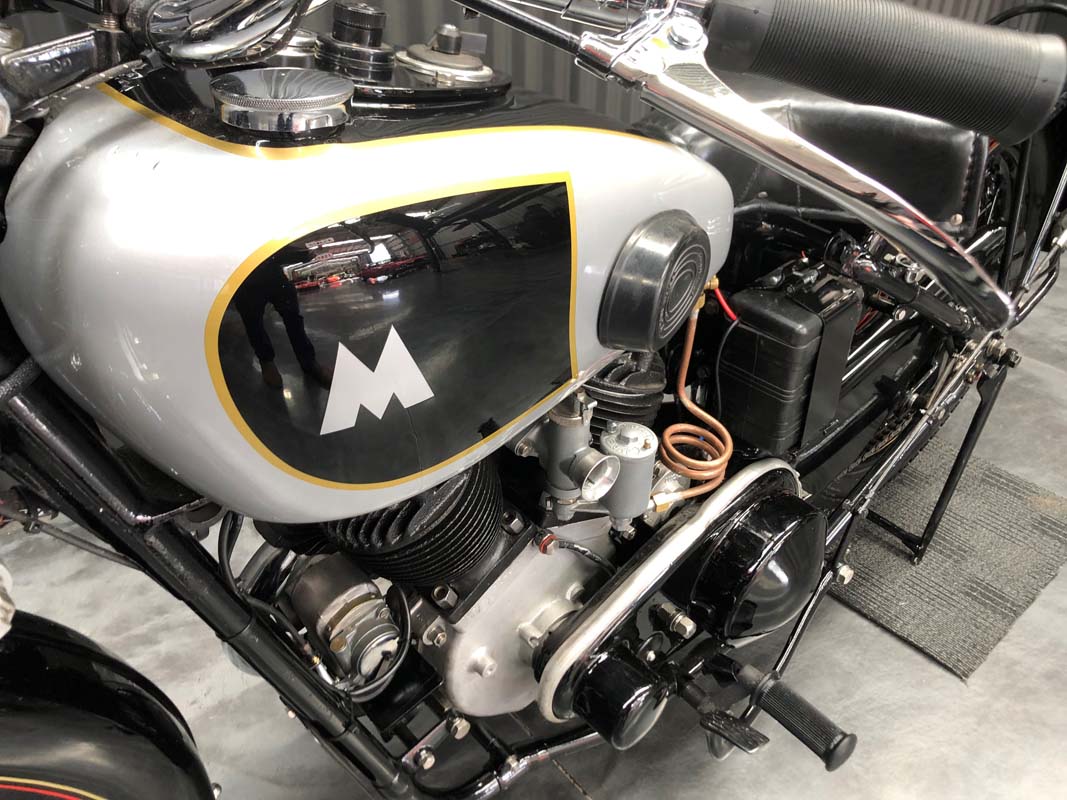 Matchless did try to grab some attention, though, releasing a ‘Sports Tourist’ version of the Model X in 1937. Styled and sold as a solo, the Sports Tourist featured a lighter, shorter frame, but still with girder forks up front and a rigid rear end.

Producing approximately 25hp (18.6kW), the dry-sump 982cc v-twin featured chain primary drive to a four-speed Burman gearbox, with chain final drive as standard. The specification also included 6-volt electrics, 19-inch wheels and 8-inch single-leading-shoe drum brakes that seem measly to modern eyes but were on par with most other road bike offerings of the period.

The 1937 Matchless Model X pictured is currently advertised with Classic Motor Studio in South Australia and came to their showroom following a detailed, two-year restoration.

Unfortunately, not much of this bike’s local history is known prior to the restoration, which was completed approximately three years ago.

What is known is that, during the restoration, the motor received a complete top-end rebuild, including new pistons and valves. 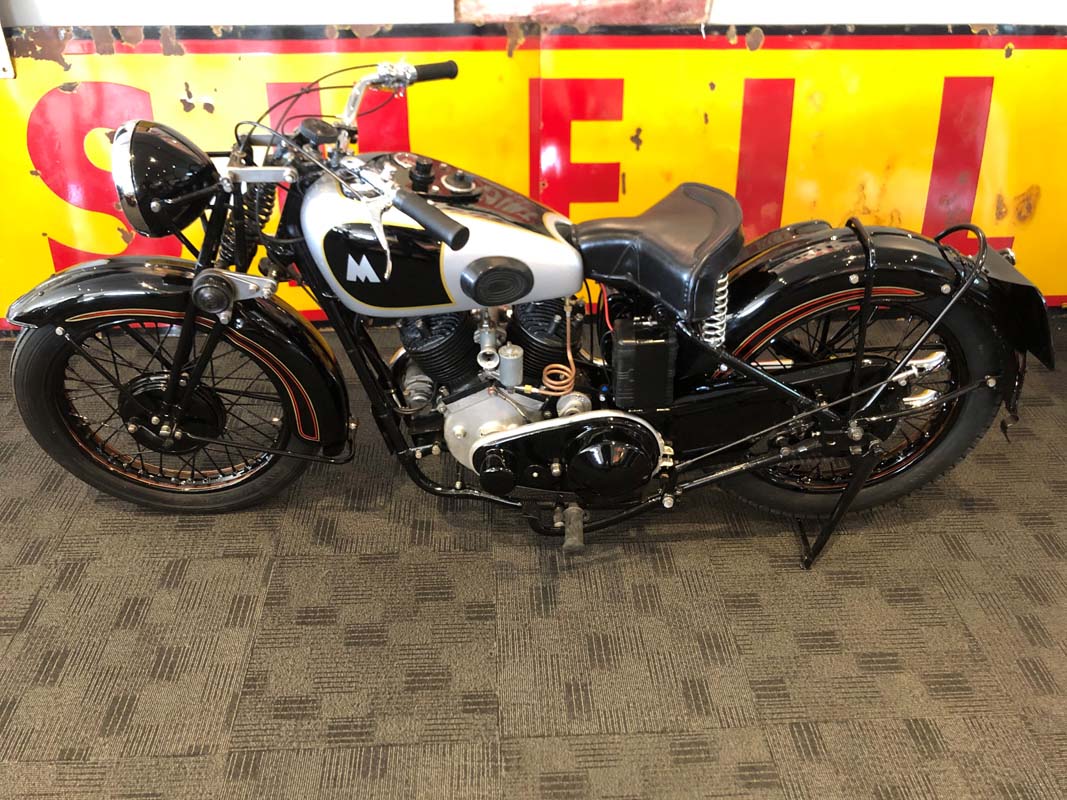 The distinctive 2-into-2 exhaust system and other brightwork was rechromed, with a fresh paint job and new saddle added, too.

Described as being in immaculate condition, the untarnished condition of those gleaming exhaust pipes is explained by it spending time as a display bike in a private museum since the restoration was completed. 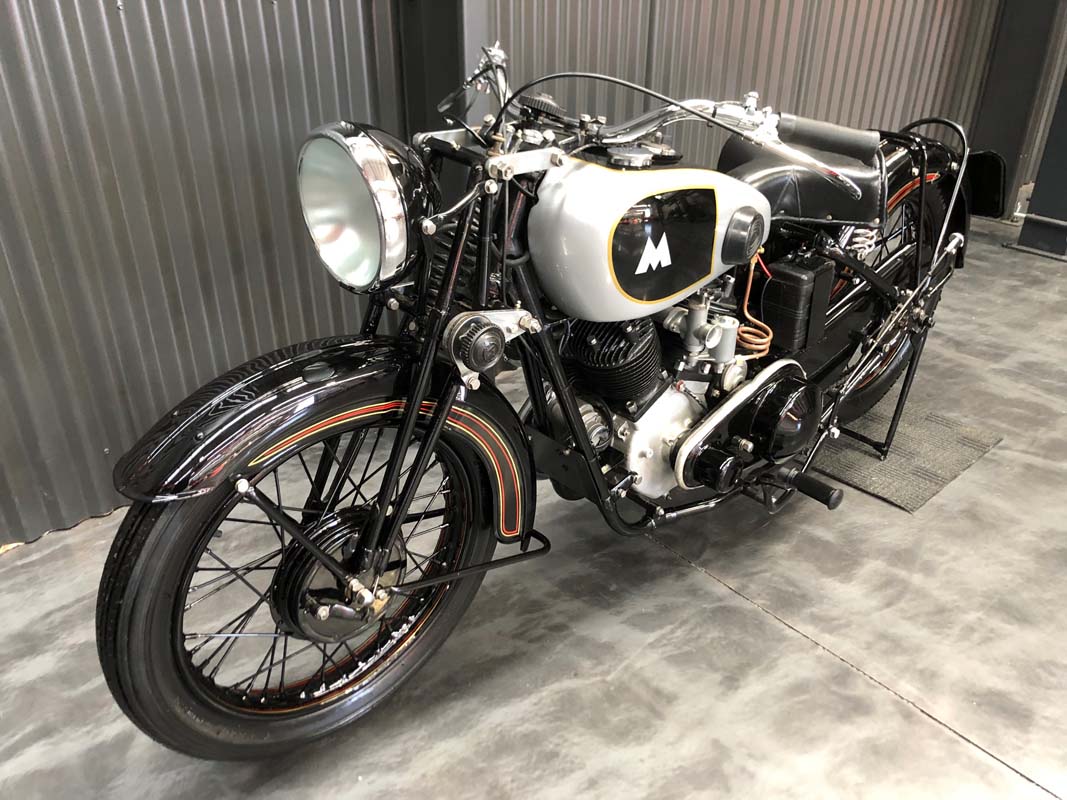 Serious Matchless aficionados will notice a few deviations from authenticity, like the painted ‘M’ tank identification instead of a badge, and what appear to be incorrect-era knee rubbers. Model Xs of this era usually had a slotted filter over the Amal carb, which is not present on this example. The speedometer’s missing, too, which would be the first thing the new owner should consider adding if they wish to take this classic out on the road. 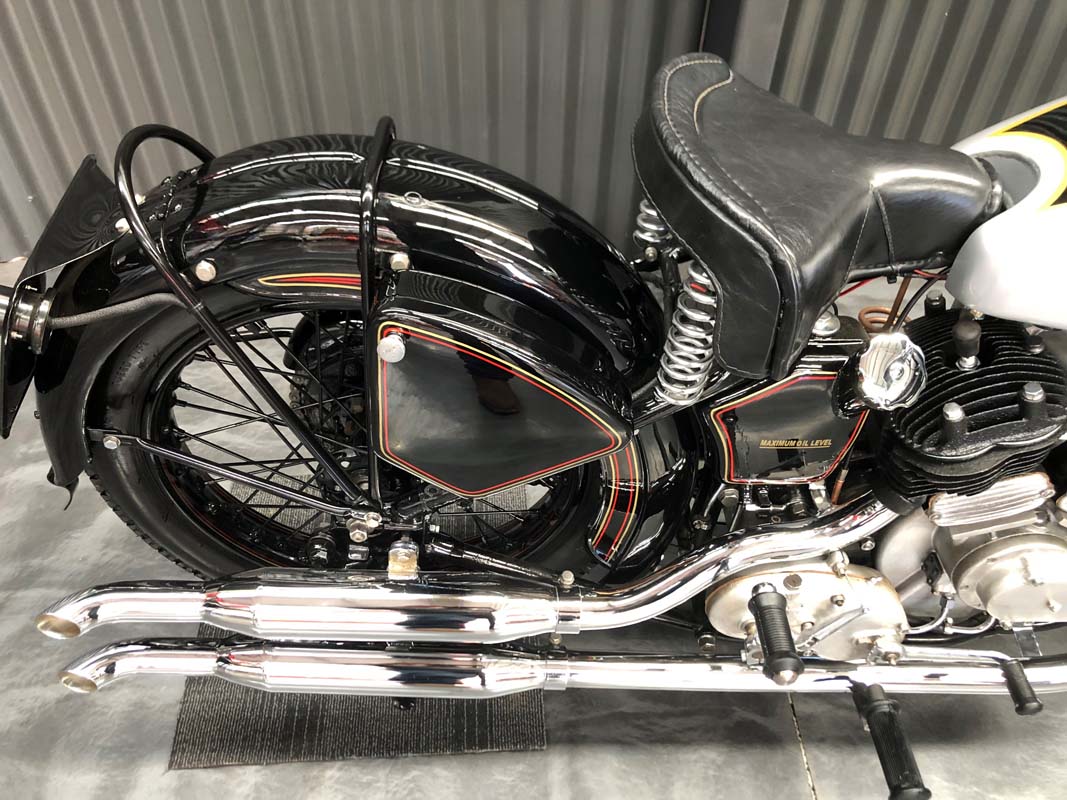 In all other respects, this Model X is described as ready for club use. Thanks in part to the low compression that was part of the engineering of these machines, the sidevalve v-twin is said to kick over easily.

New Avon Speedmaster tyres have been fitted and all other parts have either been replaced or refurbished.

The Model X rarely comes up for sale, though, which makes the appearance of this restored example all the more noteworthy and why we’ve chosen to feature it here.

For the British bike enthusiast who’s looking for a torquey classic cruiser with a dash of style and a reasonable price tag, the Matchless Model X is an attractive choice.

While not specifically identified as the ‘Sports Tourist’ variant of the Model X that debuted in 1937, most features on this bike point to it being that variant.

Complete, running and described as being in immaculate condition, this is a rare bike – even in Matchless terms - that rarely comes up for sale, even moreso in this condition.

You can also view the bike online at justbikes.com.au with the ad code: JBFD5170117.