The Monster is a 'street fighter' that offers outstanding sport bike performance together with a style that has often been imitated but never equalled.
The Monster is the original 'naked' motorcycle. Launched in the early 1990s it introduced a new way of motorcycling and has become an icon of Italian design.

The Monster is a 'street fighter' that offers outstanding sport bike performance together with a style that has often been imitated but never equalled.
The Monster family offers a choice of air or liquid-cooled, 2 and 4 valve Desmo engines. All models boast Superbike derived Trellis frames, fuel injection and race worthy braking and suspension systems. Meeting the demands of a new rider as well as the most experienced veteran, there is a Monster to satisfy everyone. The Ducati Accessories catalogue, which is included with each bike, provides plenty of ideas to customise your bike and improve its performance. From carbon fibre parts and accessories machined from solid aluminium, to high performance exhaust systems and hundreds of special components, there is something to make each and every Monster unique.Every 2008 Ducati requires maintenance less often and with fewer parts during servicing, dramatically reducing maintenance costs - by as much as 50 percent.
The Monster family welcomes all riders with the easy to own and ride 695. Moving to the larger capacity SR series of Monsters, the S2R uses 1000cc power and essential design to produce a thrilling road experience. For the ultimate in Monster performance, the S4R and S4R S, with race like performance for the street and aggressive SR styling, stand at the leading edge of Monster technology and design. And now for 2008, a Special Edition Tricolore S4R S makes its debut appearance at the head of the family.

Monster S4R S Testastretta
The character of this top of the range Monster represents the true hallmark of all Ducati Monsters.
The headlamp fairing, the dual, vertically stacked silencers and the racing stripe that characterises all the naked bikes in the 'single-sided swingarm' family, is now enhanced by several pure racing features that underline its thoroughbred looks.
For 2008, a Special Edition Tricolore S4R S makes its debut appearance at the head of the family. It combines the Tricolore colour scheme of the tank, tailpiece and headlamp fairing with the gold Trellis frame and y-spoke wheels.
The S4R S is characterised by a Ducati Trellis frame and black swingarm, a front end derived from the 999, and by the Y-spoke wheels. There are many more details taken directly from the Ducati race division that would normally go unnoticed on a faired bike, but are exposed for all to see on this Monster street fighter. Such as the triangular oil cooler and numerous carbon fibre parts, including the silencer cover, front mudguard, cam belt covers, exhaust system heat shield, radiator covers and the side panels. As proof of the painstaking attention to the tiniest details, even the cooling circuit ducts are now forged in aluminium rather than moulded in rubber.
Two attention grabbing vertically stacked silencers in aluminium, complete the overall super-aggressive but beautifully styled statement of performance and technology. The same attention to detail was dedicated to the cockpit which is equipped with the same instruments as the S2R 1000 but with dedicated model graphics. Two different colour schemes for the tank and headlamp fairing are Ducati red and pearl white. All schemes are distinguished by the racing stripe (white for the red tank, red for the pearl white, and grey for the black) that slashes the machine from fore to aft and is located in a more central position and wider than that of the previous SR machines.
Chassis
One of the most prominent engineered components on the Monsters is the super high strength steel tube Trellis frame. Stiffened still further on this model the frame is combined with the same single sided aluminium swingarm that is found on all versions of the SR family.
The main differences are to be found with the suspension and brakes. The front end is equipped with parts taken from the Superbike, starting from the Öhlins 43mm upside-down forks, with low friction TiN treatment to reduce sliding resistance, which are fully adjustable for preload and damping.
Two 320mm discs and radially mounted calipers represent the top of the range front brake solution fed from radial master cylinders mounted on variable section aluminium handlebars. An Öhlins rear shock, fully adjustable in compression, rebound, and preload and Y-spoked wheels with exceptional rigidity and low weight complete the chassis set-up.
Engine
The previous S4R model was billed as a machine at the top of its class in terms of performance but the S4R S Testastretta raises the bar much further by producing a massive 130hp. For the S4R S the engine was given a dedicated oil cooler designed to offer optimum performance on a naked machine.

Monster S4R Testastretta
Founder of the SR family, the S4R takes on a very important role alongside the 's' version which is the current performance and equipment leader of the Monster range.Equipped to catch the attention of the most performance hungry 'Ducatisti', the S4R Testastretta is more than capable of fulfilling its important role in the Ducati 2008 range.
The new S4R Testastretta is now available in two colour schemes, Titanium with central black stripe, and traditional Ducati red with central white stripe. Both colour versions have a red Trellis frame with black swingarm which matches the new Showa front fork sliders. The black component colour scheme is continued with headlamp mounts, fork clamps, handlebar risers, foot rests and radiator side covers.
Chassis
The fully adjustable Showa upside down forks provide a perfectly balanced front end while the rear is fully adjustable with a Sachs piggy back reservoir shock. A vitally important feature of the rear suspension system is the ability to adjust rear ride-height independent of spring pre-load, enabling the rear-end to be adjusted to an exact ride height set-up without changing the shock's other settings, thanks to the adjustable push-rod.
Radially mounted Brembo front brake calipers provide stopping power while giving the front end a decidedly race-orientated look.
Engine
The S4R has a 130hp and continues to feature twin stacked silencers, aluminium Trellis single sided swingarm, sporty headlamp fairing, exclusive paint schemes and high quality suspension. The addition of the powerful deep sump Testastretta engine represents a milestone in the development of the Monster S4R.

Monster S2R1000
The S2R 1000 completes the 2008 SR range. For this Monster, Ducati developed an advanced version of the chassis, designed to enhance the sports performance of a truly superb engine. The main style elements are taken directly from the SR versions, starting from the racing stripe, which has become a hallmark feature of the entire SR Monster family. But in a bike that combines bare essential style with a host of exclusive details, many components have become responsible for the overall aesthetic appeal of the machine. This category inevitably includes the twin vertically stacked silencers that emerge from the right-hand side of the bike and the beautiful single sided swingarm in an aluminium tubular structure that characterises all SR Monster machines.
Chassis
The S2R 1000 Monster allows the rider to get the most from the power and flexibility of the twin-cylinder two-valve engine thanks also to a chassis designed specifically to maximise rideability and safety. In this context, a series of components have been used on the basic set-up shared by all models in the 'single-sided swingarm' family. With respect to the 800cc version, the 1000 features a more powerful braking system: a pair of 320mm discs on the front, with four-piston calipers and a PSC master cylinder with separate reservoir, and a 245mm disc with two-piston caliper on the rear. The Showa upside-down forks with full adjustment of preload and damping is also tailored for this specific version of the Monster, while the rear monoshock is made by Sachs and is of the same type installed on the 800cc model. Fully adjustable handlebar levers enable a lever-reach to suit all riders.
Engine
The L-Twin engine of the S2R 1000 is the same powerplant used on the SportClassic family. The 95hp dual spark engine is even more flexible and generous in all riding conditions. For this engine the twin exhausts features a specific layout designed to emphasise the already superb torque output readily available from surprisingly low revs. Also, the manual choke of the earlier versions has been replaced by an automatic valve designed to make cold starts even faster, even in the coldest of climates. The air-cooled Desmo engine has been integrated with a series of solutions to keep exhaust emissions to incredibly low levels. 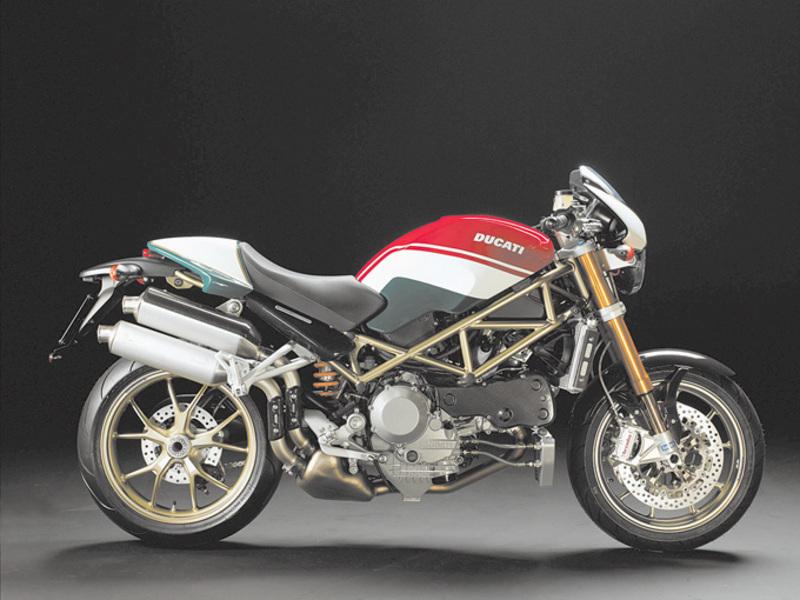 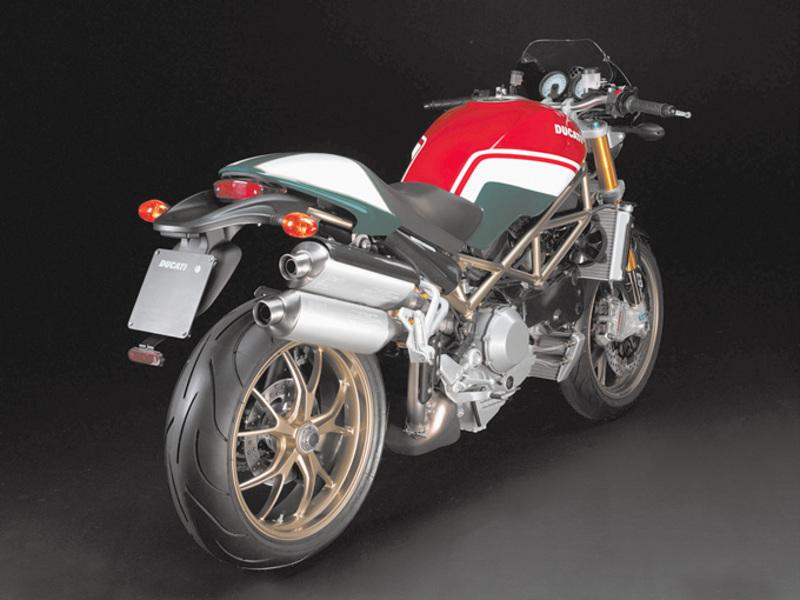 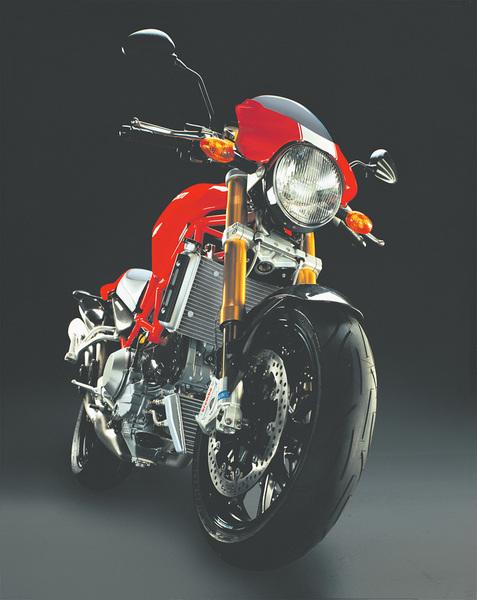 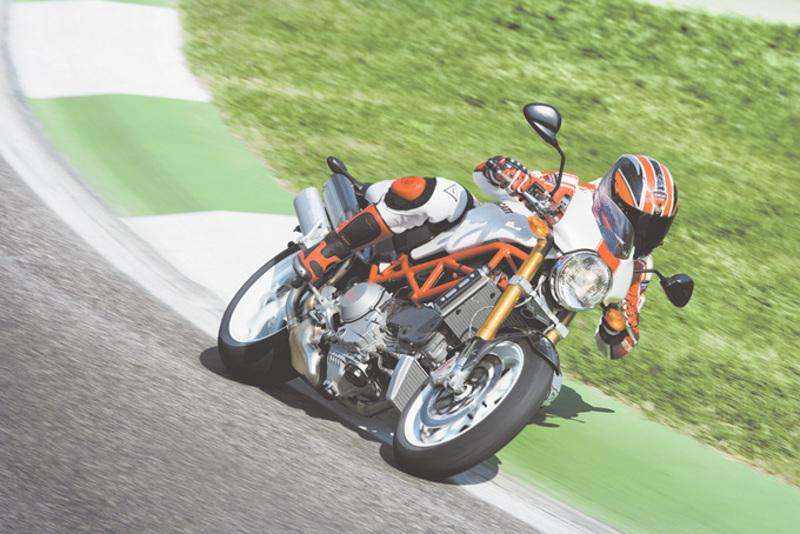