Desirable Ducatis to be auctioned by Shannons

Desirable Ducatis to be auctioned by Shannons

Shannons’ next timed online auction will feature more than three dozen motorcycles, with a trio of Ducati modern classics leading the way.

Combining consignments from Melbourne and Sydney, but conducted exclusively online, the 11-18 November auction will feature eight collectable Ducatis amongst 37 motorcycles in total, with a Desmosedici RR leading the way. 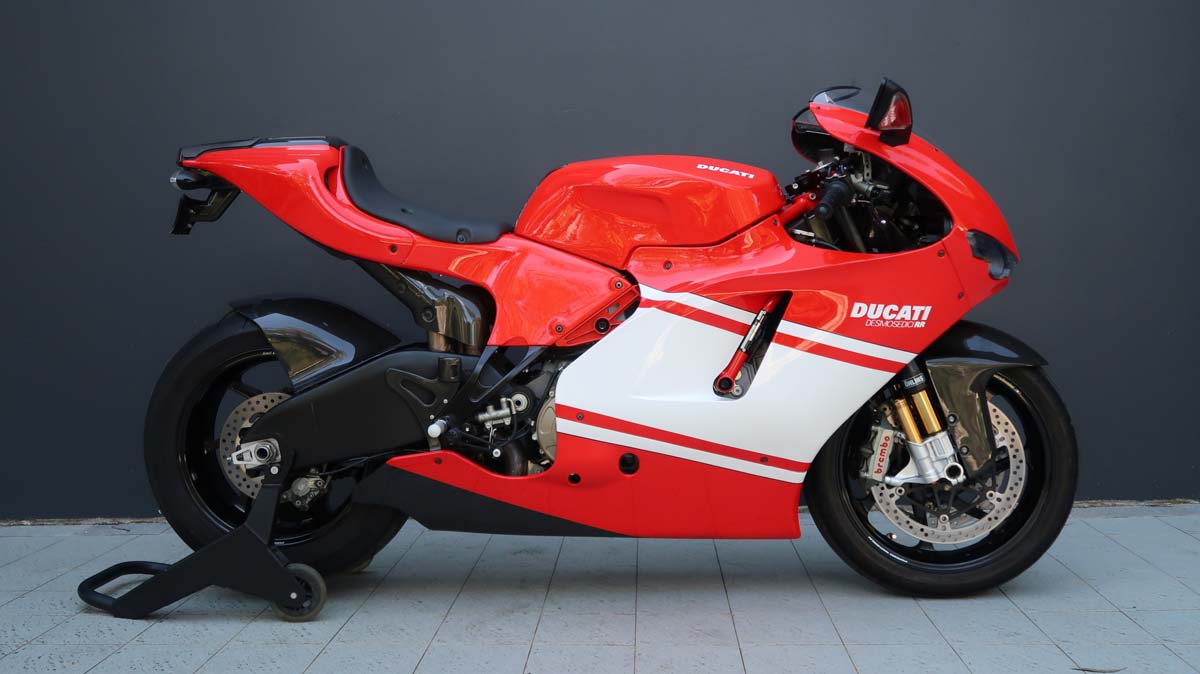 A roadgoing replica of Ducati’s MotoGP machine, the Desmosedici RR was released in late 2007 (as a 2008 model) and limited to 1500 units globally, of which only 120 were allocated to Australia.

Despite a whopping $100,000+ price tag when new, all Australian-allocated units were pre-sold, helped in no small part by Casey Stoner’s MotoGP championship-winning performance on the racing machine that year.

The pristine example being auctioned is No 0606 of the 1500 units built. Currently residing in a Sydney collection, No. 0606 was delivered new to WA and religiously serviced through to 2016, by which time it was in NSW.

Included in the sale will be the stock exhaust, all service books, both original keys, spare windscreen, battery trickle charger, workshop manual on CD and data analyzer, plus the OEM paddock stand and fitted cover.

Described by Shannons as being in stunning condition, the Desmosedici RR has been given a guiding range of $65,000 - $75,000. 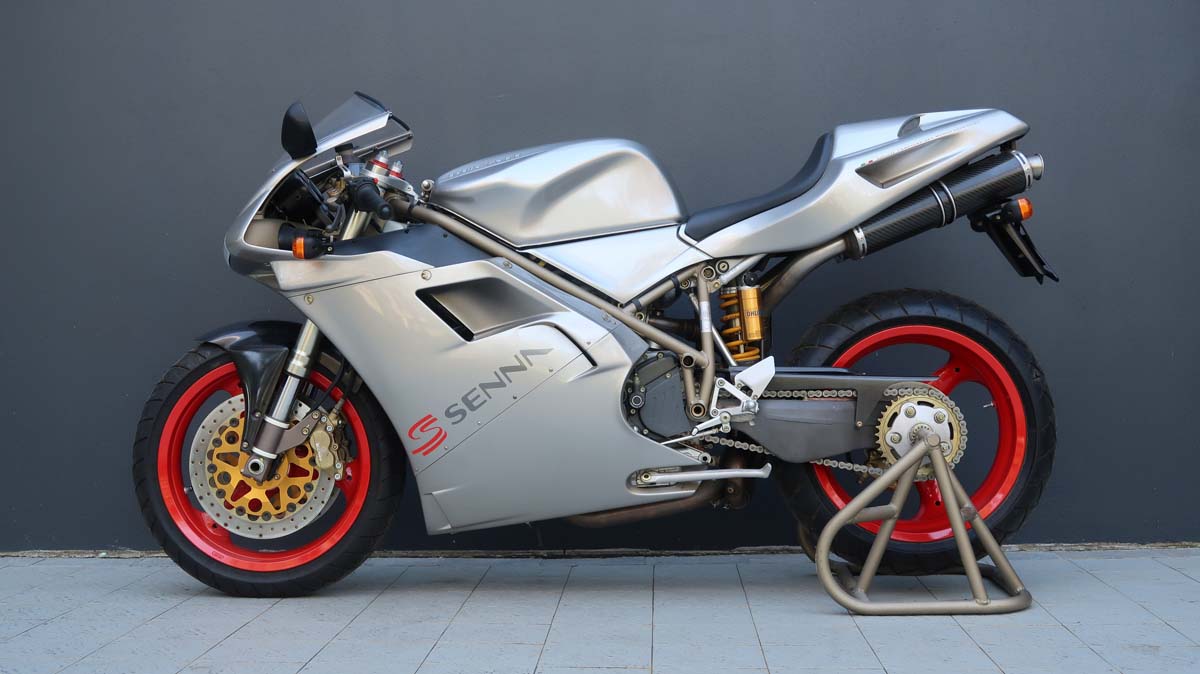 Also available from a private Sydney collection is a 1997 Ducati 916 Senna II. From the ‘second series’ of these Ayrton Senna tribute models (following the first in 1995), only 300 units were produced and the one going to auction is No. 092.

Australian delivered and sold through Fraser Motorcycles in NSW, this example is finished in the same silver-with-red-wheels livery that defined all Senna IIs visually. Under the skin, it’s essentially a stock 916, with a 916cc fuel injected, 4-valve, 90-degree v-twin in a trellis frame with a six-speed gearbox, single-sided swingarm and USD forks.

The 112km on the odometer is described as ‘delivery miles only,’ with the minimal use of the first owner continued by subsequent owners.

Primarily a display bike, this Senna II had been drained of all fluids and the battery removed, so would need some recommissioning if the next owner intended to return it to the road.

The service books, paddock stand and spare key will be included with the bike that comes to auction with a guiding range of $45,000 - $55,000. 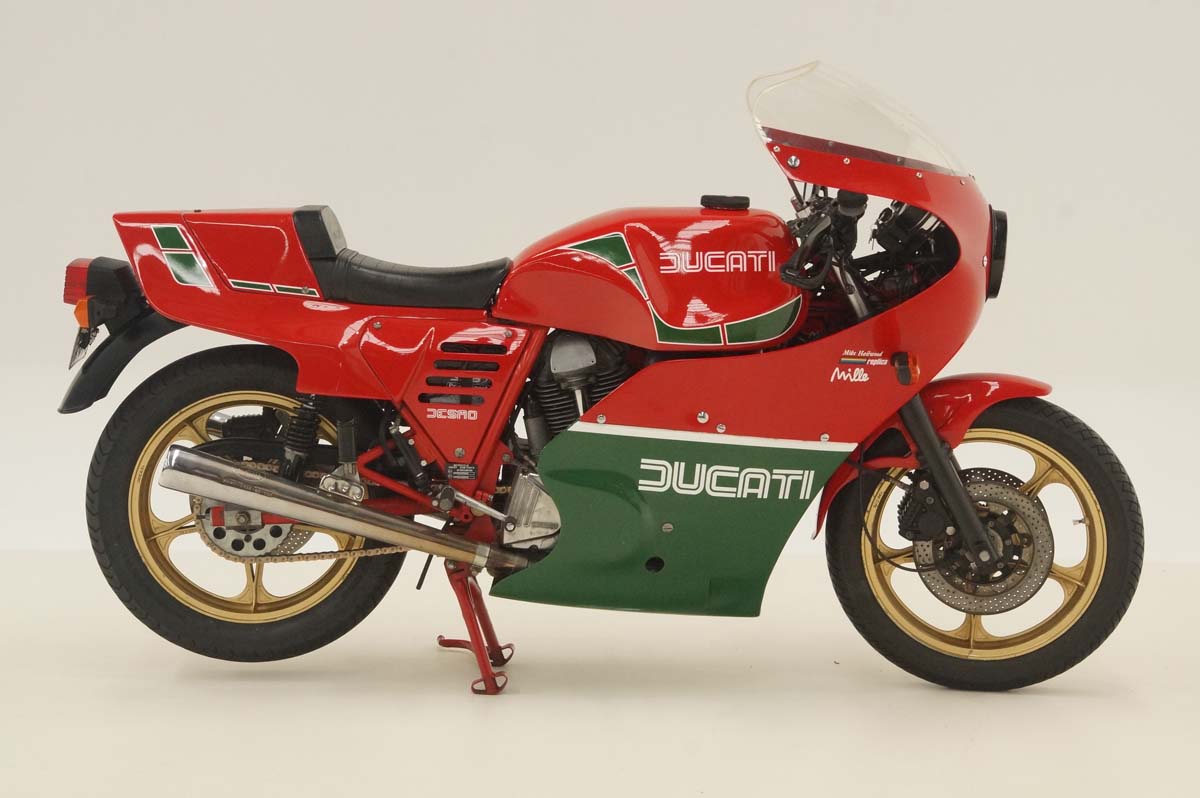 Originally produced to celebrate Mike Hailwood’s epic Isle of Man TT comeback in 1978 and originally available in 864cc form when released in 1979, the success of the ‘Mike Hailwood Replica’ (MHR) Ducati bevel v-twin led to a 973cc version – the ‘Mille’ (thousand) – in 1984.

Essentially a bored and stroked version of the original MHR, the Mille version offered the same abundance of torque, but added some refinements and improvements, including a one-piece crankshaft, Nikasil-coated barrels, revised bevel drive and electric starting. A dry clutch was added and the electrics improved, while the frame was new, too, based on the 1984 900S2.

Silentium mufflers were standard, but Contis were optional and have been fitted to the auction bike.

Marzocchi suspension front and rear carried over from the 900 MHR, as did the 280mm front brake discs, but the Mille added two-piston calipers and downsized the rear disc to 260mm.

Signature red and green styling remained, with some revisions to the fairing due to the new frame.

While Ducati devotees have their favourite amongst the ‘new’ and ‘old’ MHR, the Mille seems to be enjoying something of a second wind on the collectable motorcycle market, so Shannons have given this Melbourne-based example a $30,000 - $35,000 guiding range.

Other Ducatis consigned for the 11-18 November auction include the following:

The Shannons Spring Timed Online Auction runs from 11 to 18 November, 2020.  Sydney-based consignments are available for viewing at selected times, but the Melbourne showroom is closed under COVID-19 restrictions.

For more details on selected lots, arranging a pre-auction viewing (Sydney only) and information on how to bid, call 13 46 46 (option 6), email: [email protected] or go to: shannons.com.au