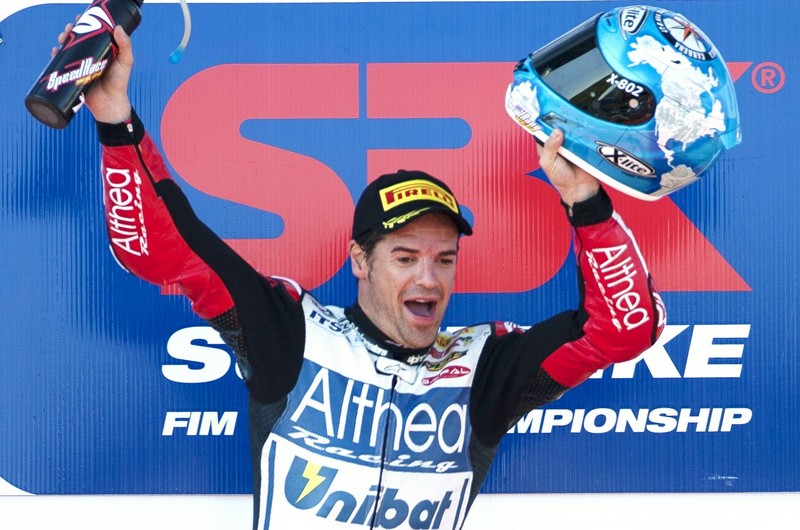 Neither victory was easy, though, Checa having to fight his way clear of the Yamahas of Eugene Laverty in race 1 and Marco Melandri in race 2. The dual win was Checa's fifth clean sweep of the season. Checa is now the first Spaniard to win the WSBK title, while it was the 14th solo victory for Ducati.

"I thank everyone, every person that has helped me throughout my career, from the beginning up until today, for helping me reach this point.

"I especially want to thank Genesio Bevilacqua (the boss of Althea Racing), my entire team and Ducati of course. I am experiencing so many emotions and must admit that it was very difficult to keep my concentration in the final stages of race one.

"Then, in race two, I tried to race as fast as I could, doing what I like to do best, and was able to win once more. Now we can relax and relish in this unforgettable moment."

Ahead of the races, Castrol Honda's Jonny Rea was the star of Superpole, finishing ahead of Eugene Laverty (Yamaha), Checa and Leon Camier (Alitalia Aprilia). Best of the Aussies in Superpole was Troy Corser (BMW Motorrad), who finished 12th, with Mark Aitchison (Pedercini Kawasaki) 15th. Still recovering from his foot injury, last year's champion, Max Biaggi (Alitalia Aprilia), was a non-starter at this round.

For Race 1, Laverty got the early jump, while Aitchison crashed out on the first lap. Checa spent the first couple of laps in third place, marginally ahead of Tom Sykes (Kawasakai Racing) before passing Camier on lap three. From there, the Spaniard closed the gap to race leader Laverty before making his move on lap 10. From there Checa opened out a gap before a late charge from Yamaha's Marco Melandri closed the winning margin down to just over two seconds at the chequered flag.

With the title already secured, Checa didn't need to push for Race 2, but still turned in another blazing performance. Rea was the early leader, holding off Laverty and Camier. Laverty made his move on lap seven, passing Camier for the lead. Checa was always less than a second behind, though, and made his move on lap 14 to take the lead. From there, the Spaniard held a narrow lead over Laverty for the remainder of the race, until Melandri put in another late charge to take the second podium position on the final lap.

For the Aussies, Magny-Cours was a round to forget. Following his opening lap crash in race 1, Aitchison ran off the track with a mechanical problem on lap 4 of race 2 and pulled into the pits a lap later. Troy Corser recorded a pair of solid ninth place finishes, but struggled with grip in both races. Corser's weekend was made even worse with the official annoucnement that his place in the factory BMW squad will be taken by Marco Melandri in 2012. Melandri, a former 250cc world champion and MotoGP race winner, has been looking for another ride ever since Yamaha announced it was closing its factory Superbike operation at the end of this season.

Championship standings (after 12 of 13 rounds)