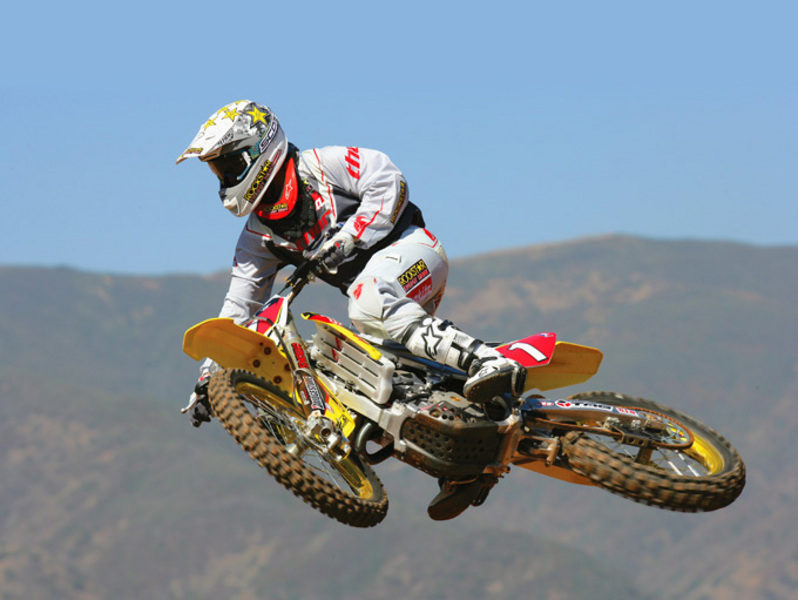 JUST BIKES: Looking back on the 2008 season, tell us about some of the highs and the lows.

CHAD REED: The highest point of the 2008 season for me was definitely winning that first race in Anaheim. It's a huge race for the industry, it kicks things off for the year and everyone is there. Winning every race in California was pretty cool too. The low was, without a doubt, breaking my back, then crashing in Detroit, bruising my lungs and breaking my scapula.

CR: Well I've made the move to Suzuki for 2009 and it's going to be an exciting time. Testing has been going really well, everything about the team looks promising. I'm really looking forward to getting out there and winning races. I feel like I can repeat the championship win, I haven't felt this motivated for a long time.

JB: Do you see racing in Oz as a retirement plan?

CR: I don't see racing back home as a retirement plan, I firmly believe that my career, when it does finish, will finish in the US. I'm not setting myself up for any kind of retirement tour over here. When I do come back to Australia I'll be wanting to try something different.

JB: What do you think's the best thing about Motocross & Supercross racing in Australia at present?

CR: The kids seem to be more motivated than ever these days. They have a lot better equipment, and the sport in general seems to have stepped up a few big notches. This season of Super X is set to be the biggest ever, and I think the outdoors series here was very competitive and professionally run as well. There is a lot of motivated people out there, the industry has stepped up a lot since I left in 2000.

JB: And the worst thing?

CR: The worst thing about this industry is the respect, or lack of it, between the team managers. I don't believe they work with a common goal in mind, they all seem to be in it to make their individual team look better. I think they need to take a step back and realise how small the industry really is and how much it could benefit from all of them putting their heads together and working towards achieving bigger goals.

JB: Do you have any involvement with the Suzuki Junior program at this stage?

CR: I have no involvement with a junior program at the moment, but would love to. My relationship with Suzuki so far has been great, both in the US and here in Australia. I'd love to be able to use my sponsors and contacts to help out the juniors however I could. Maybe that's a little further down the track. I'll get through this year, focus on winning a championship and see where the next few years take me.

JB: What's the most lasting memory from racing with RC (Ricky Carmichael)?

CR: I've got many memories from racing with RC, both good and bad. I've been in heaps of situations with him where I've kicked him, and then he's come back and kicked me. Our rivalry was really about how much we hated getting beaten by each other - it was a big game between us. In saying that, we really respected each other, the racing was always clean and hard, I always knew I was in for a battle. My best memory would have to be Daytona in 2005, where I came out and beat him on a track he had never lost on. I really took it to him, it was a good race.

JB: Who has been the toughest competitor, RC or Bubba (James Stewart)?
CR: I think Ricky was the complete program. He was solid, never showed any weaknesses - you could never really read him. The weakest I saw him was in 2003, in my first year of racing 250cc.

I was able to beat him on a number of occasions, back to back. Then he stepped up to the RC we all know. He wouldn't give anything away, he always rose to the occasion, even if he was injured. I don't think James has that complete program. I think he's a lot more vulnerable than Ricky was.

JB: What's your favourite track of all time and why?

CR: It's hard to pick a favourite, though I really enjoy San Diego - it's the biggest stadium we go to, and I've only lost there twice out of seven occasions. Daytona is another good one, it's a special race for the industry, and it's a difficult race every time. My favourite outdoor track would be Red Bud in Michigan, or possibly Milville in Minnesota.

JB: Do you have your own test track?

CR: I have a few test tracks, including Suzuki's in California, plus two of my own in Florida. I've also got one back here in Australia.

JB: Who's the funniest guy on the AMA SX circuit?

CR: There's a lot of funny kids on the circuit these days. Davi Millsaps would have to be the one I'd pick.

JB: Anyone ever pulled a good gag on you?

CR: I've been pretty lucky, I haven't been the target of many practical jokes. I'm sure I will be now!

JB: Who is your all time hero of the sport? And why?

CR: My all-time hero is Jeremy McGrath. He's someone who I really looked up to as a kid. I admire his style and character, and who he was off the bike. He seemed like a good, fun guy to be around, he's someone I wanted to be like.

CR: I love MotoGP. I tend to follow that the closest. It has a lot of passion, a lot of great personalities. How can you not love Valentino Rossi? He and Casey Stoner, who I also follow closely, have had some great battles in the past. It's always a thrill to see them race each other. I also follow how Troy Bayliss is going in the World Superbikes. I don't tend to follow Formula 1 so much, it's too political. It doesn't really seem to be about the driver in the end.

JB: You may know that we sponsor CDR. We understand you have links with Craig Dack from way back? Could you elaborate?

CR: 'Dacka' and I go back a very long way. I was part of his team in 2000 before I left for Europe. He was also my team manager at Yamaha of Troy in the States back in 2002. We've been great mates ever since. I keep in contact with him, we can talk about anything, whether it's racing or just life in general. I respect him as a team manager and for what he does for the sport. He regularly reminds me how he was on the best-placed Aussie Motocross des Nations team - before my time is done, rest assured, I'll take care of that!

JB: What do you think you'll be doing 10 years from now?

CR: In ten years I'll hopefully be successfully retired from two wheels, and a proud dad. I'll probably be doing something else crazy - V8 Supercars or something.

Thanks Chad - enjoy the rest of your time here with Super X. We know all your Aussie fans will enjoy seeing you here!
Our thanks to Craig Dack, Fluid PR and FPG for making this interview happen.

8 into 22?
If you're wondering what the story is with the #8 plate on this issue's cover, Reed was running the non-standard number at the recent U.S. Open SX event in support of good friend and racing adversary, Grant Langston, who recently underwent surgery for a cancerous melanoma in his left eye. Langston, who won last year's U.S. Open, is unsure if he'll regain vision in the eye following the surgery and follow-up radiation therapy.