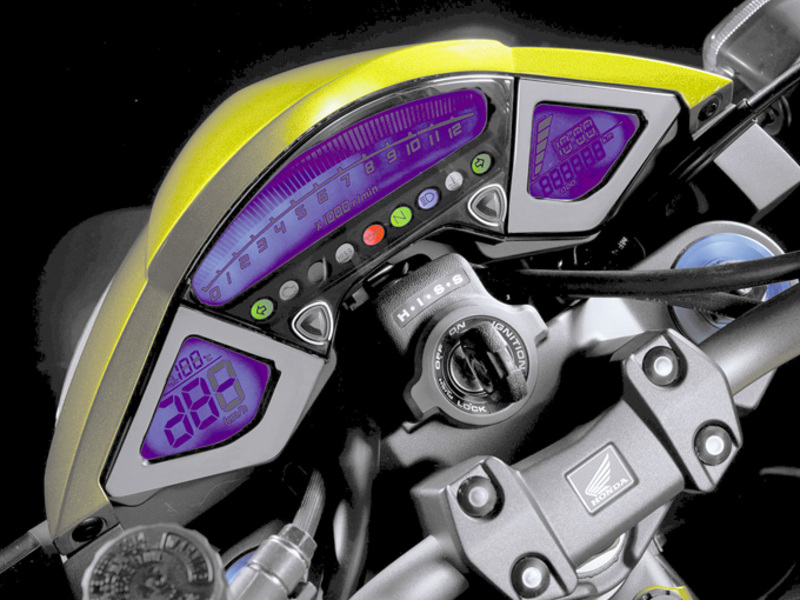 Much of this aggressive impact is embodied in the CB1000R's distinctive 'mass forward' orientation, which positions the rider slightly forward and seemingly above its dynamic inline-four engine.

Its short, slim tail cowl, brawny fuel tank and side cowls further convey an image of awesome street performance. Mechanical parts like its magnesium head and ACG covers, and natural finish aluminium pivot plates exude a high-tech look of purposeful performance, whilst an array of nickel-plated Allen-head bolts accentuate the outer perimeters of the engine's side covers.

The next aspect to leave a strong impression is its size, or lack of it. Remarkably, the CB1000R looks and feels more like a compact mid-sized sportbike than the full-bodied litre-class performer it really is. Once seated aboard, its compact form and easy reach to both the ground and its controls are simply extraordinary in this class of naked road machines.

Its high energy thrust of excitement is generated from a direct descendant of Honda's race winning powerhouse, the exceptional CBR1000RR Fireblade, winner of the 2007 World Superbike Championship.

Like the mid displacement Hornet, the CB1000R's mill has been tuned for maximised low to mid range performance. However, unlike the Hornet, the new CB1000R's engine has also been tuned for stronger, more exciting power that extends further up the powerband, resulting in nearly 30% stronger performance that is smoothly linear in its delivery.
Rather than peak power, it is torque, especially in the midrange, that is the real thrill experienced when the throttle is opened.
All this power gets to the rear wheel through a light action hydraulic clutch that takes full advantage of the engine's strong low-end torque to allow it to be engaged at engine speeds of less than 2,000rpm without fear of engine stalling. This is the power zone where the CB1000R truly shines.

The system consists of an electronically controlled combined "brake by wire" system with an innovative stroke simulator. Direct motor control ensures
precise operation of the ABS. The components are divided into several smaller units so there are more, but smaller units than in previous systems.

All the basic ABS and CBS functions are provided, including the prevention of wheel lock, improved balance and easy operation. This is achieved without any compromise to stability during ABS operation. Pitching is minimised so that the bike keeps its normal position. Overall, sport riding performance is uninterrupted - cornering feel remains the same and controllability is enhanced.