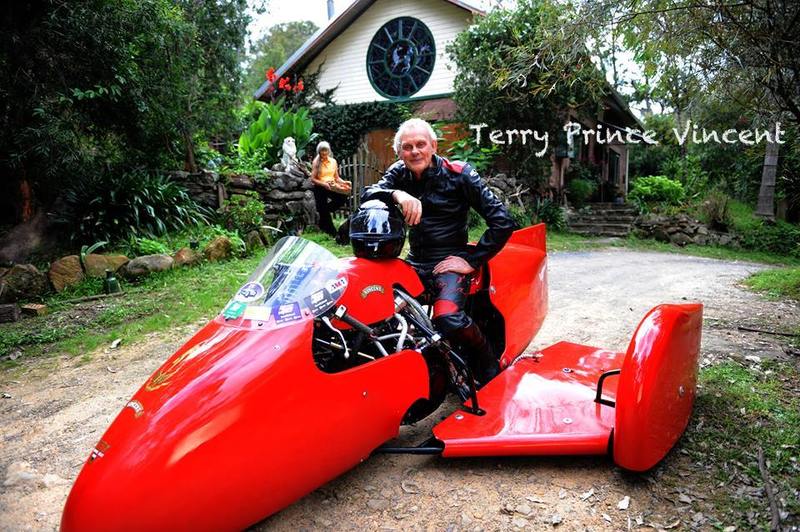 Leading the way for Man Month and a recently announced ambassadotr for the charity is Terry Prince, a name familiar to many in the classic bike scene both here and abroad.

For Prince, participating in Man Month was a given, as the NSW-based classic bike specialist lost his daughter, Silvana, to breast cancer last year.

The 74-year-old has campaigned his Vincent v-twin in just about every form of motorsport imaginable, including circuit racing, hillclimbs, drag racing, and more recently, land speed record runs, including several LSR attempts on the Bonneville Salt Falts.

After five years of trying, Prince finally achieved a Bonneville class record in 2013, but his fondest memory of the salt is from 2009, when Silvana accompanied him.

Silvana was diagnosed with breast cancer in 2009, and turned to Terry for as a support system while she received treatment.

"I was always positive that she would get through it. Silvana and I were very close. We did a lot of research together and called each other up all the time to pool our ideas and thoughts together," said Terry.

The McGrath Foundation and promoting breast awareness has become even more important to Terry after Silvana passed away from breast cancer last year.

"Silvana was only 44 when she passed away, and in her early 40s when she was first diagnosed. She found a lump and dismissed it thinking it was a cyst. Unfortunately, it was very late by the time she caught it," said Terry.

Since getting on board with the campaign, Terry has spoken of his hopes that men across Australia understand the role they play in supporting the women in their life and making sure they are breast aware.

"It's so important for all men, even the tough guys who love their motorbikes, to be aware that the women in their life need to be actively breast aware," said Terry.

"The MAN MONTH campaign is a great way to get the fella's on board with an issue that often men don't like to talk about.

"It's important to get the message out there, whether you dress up in pink, or simply sign up to the campaign, that the women in your lives need to be breast aware."

The McGrath Foundation says that around 15,000 women in Australia are diagnosed with breast cancer each year. Further details on Man Month and breast cancer awareness can be found at www.mcgrathfoundation.com.au/manmonth