The imminent release of "The World's Fastest Indian" starring Sir Anthony Hopkins (April 6 in most areas around Australia) will undoubtedly generate renewed interest in Burt Munro, the New Zealand-born motorcycle engineer, innovator and racer who broke a land speed record at the Bonneville Salt Flats on a 1920 model Indian at the ripe old age of 67.

George Begg's book, 'Burt Munro: Indian legend of Speed' sheds much light on Munro's history in motorcycling, both before and after the record-setting run documented in the film, and is an eminently readable and well researched tome on a figure in motorcycling history that few people today would know of.

In many ways Munro was a forerunner of another famous New Zealand motorcycling identity in John Britten and like Britten, Munro displayed a unique, almost natural mechanical ability, despite limited tools, resources and funds.
Munro bought what would become the 'Munro Special' Indian Scout new in 1920 after owning and tinkering with a succession of mainly British motorcycles, racing them at the Fortrose circuit near his home in Invercargill.

While the film largely focuses on Munro's record breaking run in 1967, Munro had also set a speed record in 1962 - with the same Indian - before rebuilding it completely, including boring the engine out to 58cu in (950cc), in 1966.
History would show that the rebuild did the trick for the affable and laid back Munro, who took the 'Munro Special' back to the Bonneville Salt Flats in 1967 - recording a class record of 183.58 mph (295.44 kph) and one way run of 190.07 mph (305.89 kph), the fastest ever officially recorded speed on an Indian motorcycle.

This information, plus much more is covered in the book by Begg, whose other published works includes a history of Bruce McLaren of F1 racing fame.
Black and white photos throughout offer a fascinating insight into Munro's early racing career, including flat out runs on Oreti Beach in the late 1940s, hillclimbing, and NZ speed record-setting, all on the same venerable 1920 Indian Scout!
The book is now available at most retailers. Contact the official Australian distributors, Renniks Publications, Pty Ltd, 3/37-39 Green St, Banksmeadow, NSW, 2019. Ph: (02) 9695 7055 for all enquiries. 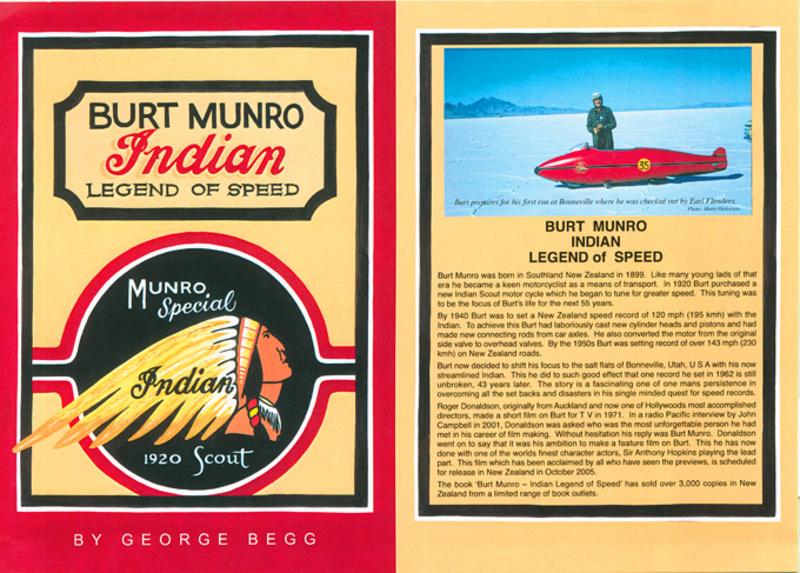