The builder of this bike, Ian Solley of 7 Ages Custom Motorcycles in the UK, has shown a particularly 'Shakespearean' bent in naming his creations.
From the loins of these two foes, this UK-built custom that marries Harley-Davidson and BMW may be 'begot of nothing but fantasy', but is 'as true as steel.' Apologies for paraphrasing Romeo & Juliet, but in the case of this custom, it's appropriate.

The builder of this bike, Ian Solley of 7 Ages Custom Motorcycles in the UK, has shown a particularly 'Shakespearean' bent in naming his creations. Dubbed 'Romeo 80,' this creation follows the trend of Ian's past builds - 'Caesar Racer', 'Hamlet' and 'Othello' - all Harley-Davidson custom builds, as well as 'Richard II', which was recently reborn as 'Tempest'.

Despite being a longtime fan of BMW's boxer twins, Romeo 80 is Ian's first BMW-based custom. According to Ian, the desire to build a non-Harley custom had been bubbling away for some time, but was brought to the boil by Mark van der Kwaak's BMW Bobber, aka Cadbike 33.

Combining the 'foes' of BMW and Harley was challenge, but one that Ian duly accepted, and as you can see for yourself, the finished result is stunning. Most of Romeo 80 is BMW, based on a 1982 model R80, but the Hastings-based custom builder didn't abandon his established passion completely, incorporating a number of Milwaukee-made elements into the build. Front forks are from an FXD Superglide, the headlight is a modified H-D unit, and the overall styling is also Harley-influenced.

Converting the frame of the R80 from swingarm to rigid was entrusted to P&D, one of the most renowned fabricators in England. Some precedent for this was set with Hamlet, which Ian converted from a twin-shock/swingarm rear to a hardtail. P&D's Dave Batchelar did all the frame work, reshaped the BMW tank (to fit the reconfigured frame), and also fabricated the side panels and combined seat/rear guard unit, as well as the front guard.

The 797c BMW flat twin engine was reconditioned, but didn't need much work, as Ian originally purchased the bike in restored condition. The powerplant was then extensively detailed before it was slotted back into the custom frame. The universal joints for the shaft drive were left exposed, which adds to the stripped-down look, while the stock BMW pipes have been capped with Supertrapp race mufflers, which suit Romeo 80's low-slung racer stance.

The impressive wheels on Romeo 80 are neither BMW nor Harley, but bespoke units inspired by BMW's 'snowflake' car alloys, created by Steve Taylor of Taylor-Made Wheels (UK). R80 Beemers of this era originally ran a 17/18 inch wheel package, but Ian commissioned Taylor to make the pair in 23-inch size, which don't look out of place, despite their large diameter. Again, experience dictated the decision here, as Ian ran a pair of 23-inch spoked rims on Caesar Racer, and described them as working well.

At the front of Romeo 80, a pair of custom-made clip-ons (which look like inverted z-bars) handle the steering, with Oberon bar-end mirrors fitted. Indicators (yes, this bike does have them!) are Oberon items, too. Front indicators are fixed onto the Harley headlight shell, which was also modified to carry a tiny Motogadget analog speedo, the only instrumentation on this bike. The elliptical tail/brake light and number plate are side-mounted. Rearsets use stock BMW pegs and pedals.

The two-tone blue over silver paint harks back to pre-War BMW motorcycles, when the sombre black finish of most Beemers from this era was picked out with blue detailing. Paint was done by Keith Baker of Classic Cycle Works, with the 'ROMEO 80' graphic created by Paul Leeson.

Since completion, Romeo 80 has drawn attention and adoration wherever it's been displayed, and has also featured in UK custom bike mag, Back Street Heroes.

A bunch of seemingly incompatible elements have been combined to impressive effect on Romeo 80, which we reckon is Solley's best custom creation to date. That means the next creation to roll out of the 7 Ages garage is going to have to be pretty special to top it!

See more on the other 7 Ages creations at www.7ages.co.uk 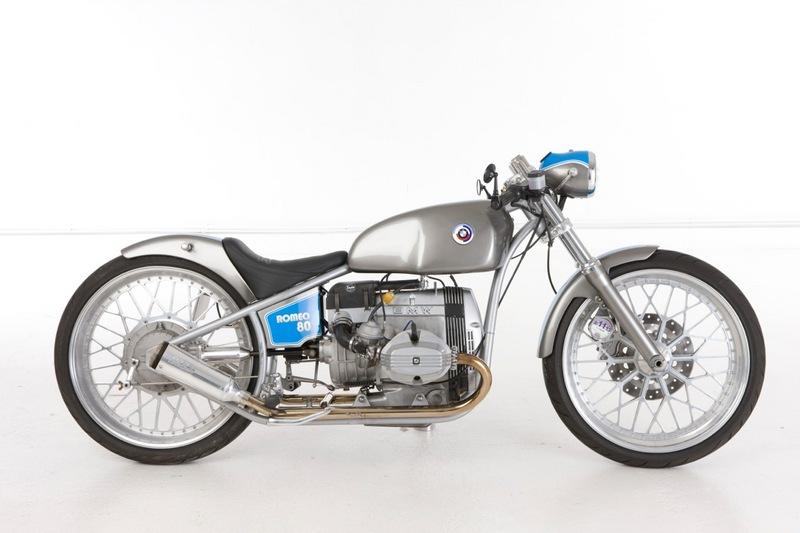 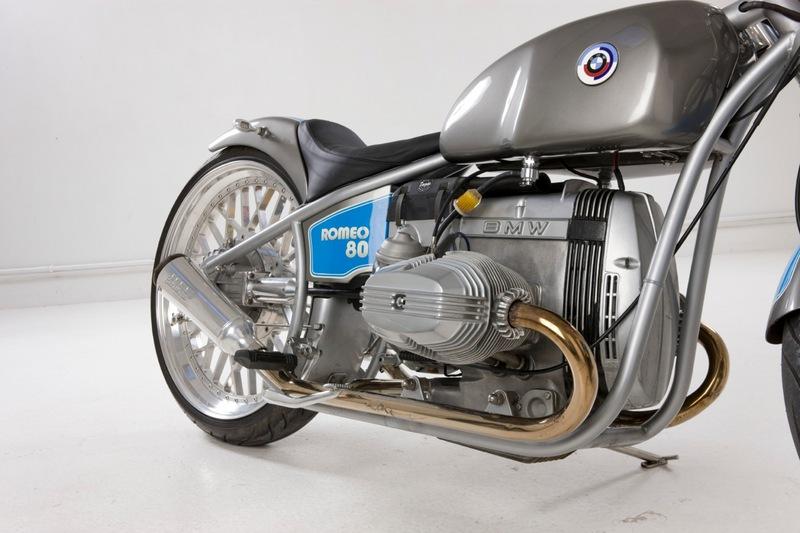 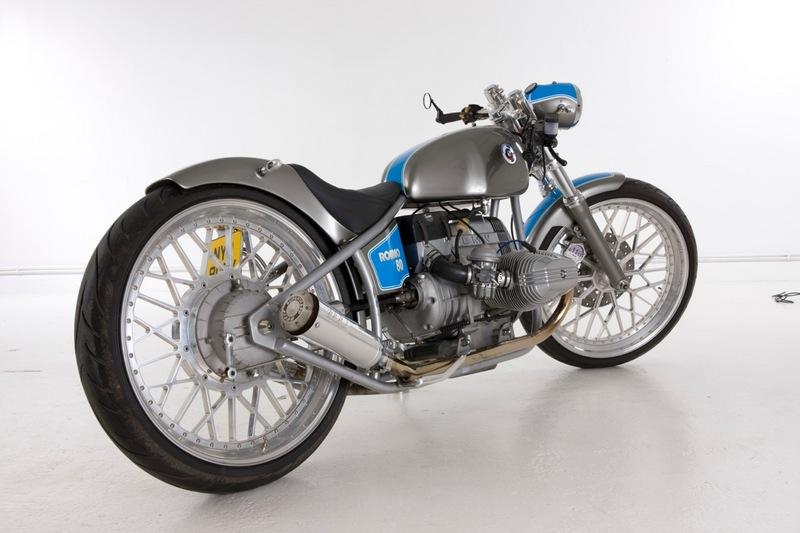 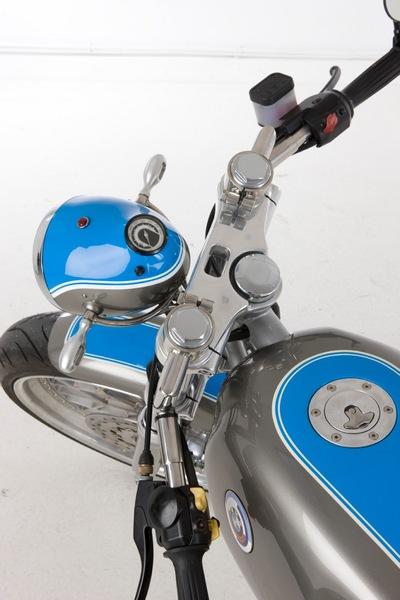 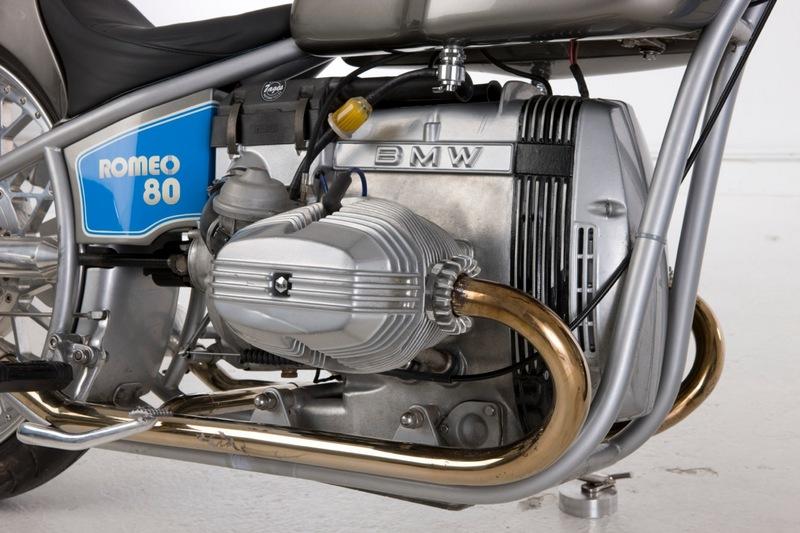