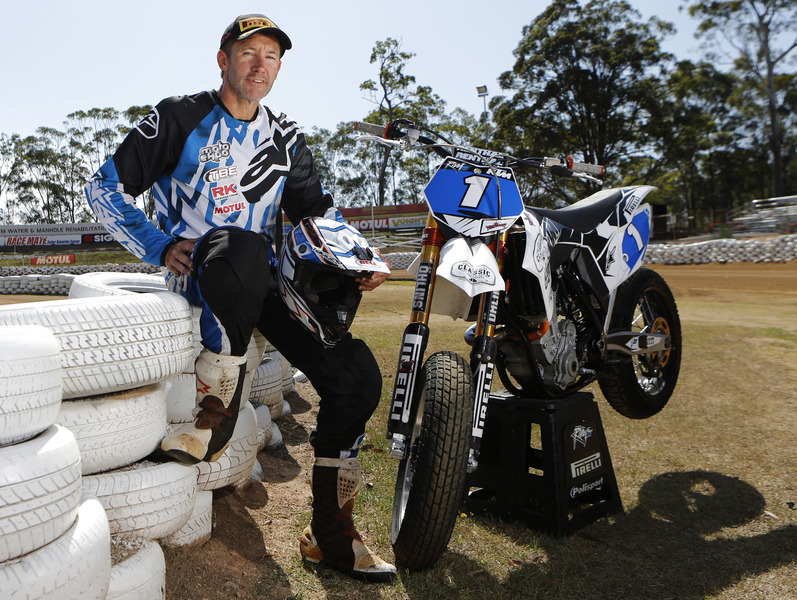 Following a successful debut last year, the event has returned to include a broader range of two-wheeled talent from a host of disciplines, and from all over the world, among them the reigning Australian dirt track and supermotard champion from Taree.
Aussie road racing legend and three-time World Superbike champion Troy Bayliss is one of two Aussies invited to take part in Marc Marquez's 'Superprestigio' DTX dirt track event this weekend at Palau Sant Jordi Arena in Barcelona.

Following a successful debut last year, the event has returned to include a broader range of two-wheeled talent from a host of disciplines, and from all over the world, among them the reigning Australian dirt track and supermotard champion from Taree.

Bayliss will ride his beloved 2012 SMR 450 in the Superprestigio class at the former Olympic Stadium, on an indoor oval track approximately 250 meters in length.

Retired from international competition since 2008, Bayliss is still passionate about his dirt track roots at both an event promotion and a participation level. As his domination of both the Aussie dirt track and supermotard championships suggests, he's still in a scalpel-sharp nick, too.

In Spain, he'll join a much younger Aussie in 16-year-old Remy Gardner (eldest son of Wayne) in the Superprestigio class, and is sure to be banging bars with event host Marc Marquez and fellow Moto GP racer Bradley Smith, as well as a heap of Moto 2 and Moto 3 competitors.

The event's Open class will also feature a litany of talent including world championship level riders from Enduro, Long track, Extreme Enduro, Isle of Man, Dirt Track and Supermotard, with Ivan Cervantes, Guy Martin, Taddy Blazusiak and last year's winner Brad Baker, just some of the names in this class.

Aussie fans will be able to catch the event on Fox Sports live Sunday morning on channel 506 and then in replay in the afternoon at three o'clock, again on 506.

"Many of the top Moto GP riders are really getting into dirt track for their training, so it's helping lift the profile of the sport, and that's why I want to do this race," Bayliss said. "We do our event in Australia, but it just makes sense to go over there and give it a go with them guys.

"It's going to be pretty cool, I haven't done a lot of the short track stuff, but KTM Australia and KTM in Spain have helped organise getting my bike over there, so at least I'm in a pretty good way straight off the bat. I'll be riding something that I know.

"Jeff and KTM have been helping me out for a couple of years now with bikes for the flat track, and this year we managed to win the 250, the 450 and the Unlimited titles in the Australian dirt track championships, then the following weekend we won the 250 and 450 supermotard championship as well. But my main bike is one I bought a few years ago, because I like the KTMs, and it's a 2012 SMR450. Even though I say 2012, it's far from old -it's got more good bits on it than you can imagine! It's a good thing.

"I don't know Mark very well, but I'll get a ride on Thursday and Friday and it will be good to hang out with guys like Jared Mees, Brad Baker and Guy Martin. There are stacks of guys there it will just be nice to catch up with.

"Also my old bosses from Ducati are coming over to have a look - David Tardozzi and Paolo Ciabatti, as well as Byron my old suspension guy from Ohlins. Heaps of guys I used to work with are actually coming to give me a hand, so it'll be pretty cool."

For more information on KTM motorcycles visit www.KTM.com.au or www.facebook.com.KTMAustralia