Starting as an offshoot of what was originally a French manufacturer of aero engines, 'British Anzani' built radial engines before and during World War I, before branching into car and motorcycle engines after the war. British Anzani v-twins were used in a small number of British motorcycle marques, but are perhaps better known for being a favoured powerplant for racing versions of the Morgan three-wheeler cyclecar. The 1098cc 8-valve v-twin on offer at Oxford was billed as being complete but disassembled, and appeared to be in very good condition. A manufacturing date was not provided, nor was there any guarantee it was a complete unit. That didn't stop some spirited bidding that saw the very rare engine swiftly exceed its pre-auction estimate of £10-15,000 to eventually sell for £45,600! The result seems high, but reflects the price paid for a 1924 Montgomery motorcycle which Bonhams auctioned in 2006. The rare, British-built motorcycle sold for _109,300 back then, and featured an Anzani 8-valve v-twin engine, similar to the one auctioned at Oxford.

Unsurprisingly, a Vincent topped the lots of actual motorcycles up for auction. Lot 190, which sold for £31,050, was a melange of 1950 Black Shadow frame and 1949 Series B Rapide engine. The engine component of the Vincent is believed to have been originally owned by Raymond Mays of BRM Formula 1 fame. The Mays association may have been a factor in its high price, but the unit was well presented and appeared to be in very good condition. A single cylinder Vincent-HRD Meteor, from the same collection as the Black Shadow/Rapide, was also on offer. Rarer than the Series C Comet single, the Meteor was a matching-numbers unit that had been restored in 2001, and sold for £11,500. A 1952 Comet was another well-presented unit, and rounded out the trio of impressive Vincents on offer. The Comet, which sold for £10,350, was billed as being road-registered as late as 2005, but its present mechanical condition was unconfirmed.

Amongst the many British offerings on offer at Oxford, a pair of Ariel Square Fours were standouts. The 1958 Mk2 version was the most interesting of the two, having been modified by a former Ariel employee to incorporate a swingarm rear suspension. Fully restored over eight years, the Huntmaster-framed Square Four was presented in 'near-concours' condition and sold for £11,500. The other Square Four, a 1939 4G (Mk I), was a non-matching numbers example that had been restored in 2010. Still requiring some items to finish it off, the '39 4G sold for £7475. Another impressive lot was #181, a Spondon-framed 1975 Silk Scott Special, believed to be the last Scott-engined example built before George Silk started manufacturing his own 700cc engines in the mid-1970s. After journeying to Kenya and Spain with past owners, this particular Special returned to the UK in 1993, where it was mechanically refurbished by a Scott enthusiast. The desirability of this rare machine was reflected in its final selling price of £9200.

Another impressive British offering was Lot 179, a 1966 Velocette Thruxton. Essentially a racer for the road, the 499cc Thruxton could produce over 40bhp without tuning, and featured café racer-style clip-on bars and rear set footrests as standard. A Thruxton won the 1967 IoM Production TT and proved to be one of the finest - and fastest - British singles of the era. Brought back to the UK from the US in 1983, this largely unused and still factory-spec Thruxton was refurbished by the second owner. Sold with full documentation of the rebuild, the restored Velocette attracted a final sale price of _18,400. Another machine in café racer trim was Lot 160, a 1960 Norton Dominator '99'. Purchased as a project, the Dominator was restored to classic café racer spec by the vendor, and sold for £3105.

Classic competition machines made up several lots in the Bonhams Oxford auction. Chief among these was the ex-ISDT Cheney Triumph of Jim Sandiford. Combining a Triumph Tiger 100 engine with Eric Cheney's lightweight nickel-plated frame and front forks, the lot on offer was one of six supplied to the British team for the 1970 International Six Day Trial. In Sandiford's hands, it won a Gold Medal, and helped the Brits defeat the BMW-mounted West German team in the 750cc class that year. After returning - in Sandiford's hands again - for the 1971 ISDT, the lot on offer disappeared off the radar for many years before being purchased by the vendor in 1996. In good condition, and with genuine competition pedigree, the 504cc Cheney Triumph sold for an impressive £12,075. A bunch of other scrambles and trials bikes, comprising Matchless, AJS, Royal Enfield, Husqvarna and even Francis-Barnett, all fetched decent prices, but some later model Triumph trials bikes, as well as a Villiers-engined Rickman 'Petite' Metisse, failed to attract buyers. Amongst the road racing consignments, a 1929 DKW racing motorcycle sold for £6670, but a 1957 MV Agusta and 1965 Cotton road racer failed to find buyers.

Top lot amongst the older British bikes on offer was a 1936 BSA Y13, which sold for £23,000. A development of BSA's 'J' model 500 V-twins, the 750cc Y13 was produced for only three years from 1936, making it amongst the rarest of BSA's pre-War offerings. Its rarity was reflected in the high price it attracted. The machine on offer had been restored, and was still missing some minor components at time of sale, but presented very well. Another vintage lot of interest was #187, a 1928 AJS K9 De Luxe. A recent restoration that was sourced from a deceased estate in Germany, the K9 had travelled zero miles since restoration. This rare sidevalve 500 AJS fetched £8740. A matching-numbers Norton CS1 also sold well. Fitted with an early post-War swingarm conversion, the 1936 Norton had been restored to a very high standard and sold for £7130. A restored 1950 Norton International was equally impressive, but failed to find a buyer. Another classic Brit was arguably the bargain of the Oxford auction in the form of a 1958 BSA Golden Flash with Steib sidecar. Fully restored in 2000, then treated to various mechanical refurbishments over the following years, the outfit sold for only £4600.

Other vintage lots on offer included a pair from manufacturers better known for their pedal bike range in the form of a 1919 Hobart lightweight and 1926 Raleigh 250 single. Hobart was one of many early motorcycle manufacturers to use Villiers engines, a 269cc single in this case, and was generally regarded as one of the better-built motorcycles of the era. The lot was an original example that had formerly been part of a private collection and never registered. Incorrectly badged as a 'Diamond' sometime in its past, the Hobart sold for £2530. The Raleigh came from the bicycle maker's second period of motorcycle manufacture, between 1919 and 1933. Acquired in 'basket-case' condition by the vendor in 1976, the Raleigh featured a 248cc sidevalve single and 3-speed Sturmey-Archer gearbox. Restored to reasonable condition back then, but requiring a full restoration today, the Raleigh sold for £2760.

One lot of particular interest was the 'Cyclemaster & Harding' Tricycle. Looking much older than its 1954 year of manufacture thanks to its unusual layout and wicker baskets, the C&H was actually a combination of a rear-slung 32.6cc clip-on Cyclemaster engine and an R.A. Harding tricycle frame. Restored to 1950s specification in the late 1990s, the C&H has successfully completed a number of vintage motorcycle runs and had also been invited to attend the prestigious 'Louis Vuitton Classic' event. This unusual tricycle exceeded its pre-auction estimate to sell for £1725. Other oddities included a pair or Rumi scooters, a 1957 'Formichino', and a 1960 'Tipo Sport'. Both featured 125cc horizontal twin engines, with the engine serving as a stressed member of the frame. Well engineered for the time, the Formichino ('Little Ant' in Italian) has become one of the most sought after classic scooters. The fully restored example on offer came from the deceased estate of a longtime Rumi enthusiast, and fetched £5980. The later (1960) Tipo Sport was similarly-styled to the Formichino, but featured aluminium alloy cylinder liners, with the option of chrome-plated cylinders and twin carburettors for extra performance. Even in standard specification, the Rumis were potent road machines, able to give larger two stroke twins a run for their money. The restored Tipo Sport came from the same collection as the Formichino and sold for £4830.

Early BMWs have been attracting good prices of late, and Bonhams Oxford auction continued the trend. Top seller amongst the Bavarians was Lot 189, a 1938 BMW R66. One of the most exclusive BMW offerings when new, the dual suspension, high performance R66 was originally intended as a sidecar mount. In solo form, the R66 was a seriously impressive sports roadster. The lot on offer was sourced and restored in the late 1950s, before being laid up a decade later. Billed as being ripe for a second restoration, the R66 sold for £12,075. A 1937 R5 was the next best seller. Unlike previous BMW offerings, the R5 used chain driven camshafts on the 494cc overhead-valve engine. This made for increased horsepower and a factory-spec top speed of more than 140 kph. Restored in the late 1970s, but untouched since, the R5 sold for £10,350.

With 85 percent of consigned lots (including over 150 motorcycle parts and memorabilia lots) selling for a total of £475,000, Bonhams considered their third Oxford auction, held in conjunction with the VMCC Banbury Run, a great success. For full results and further details, go to www.bonhams.com

All images and information courtesy of Bonhams 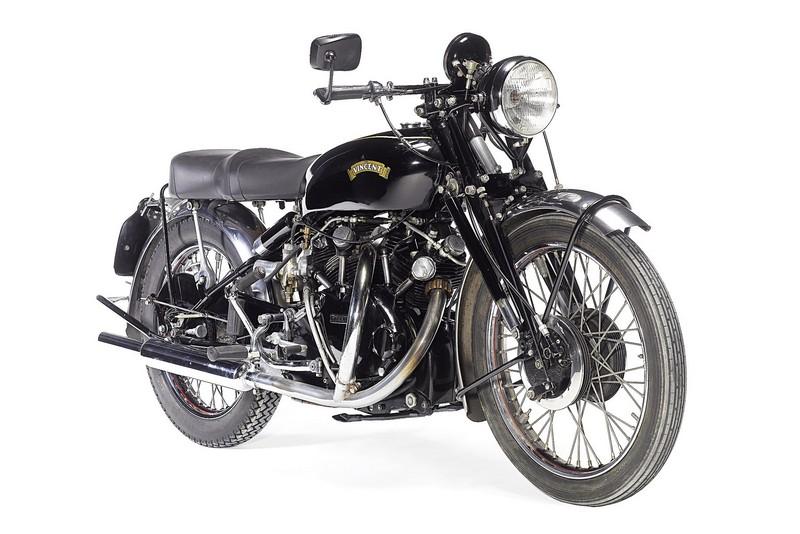 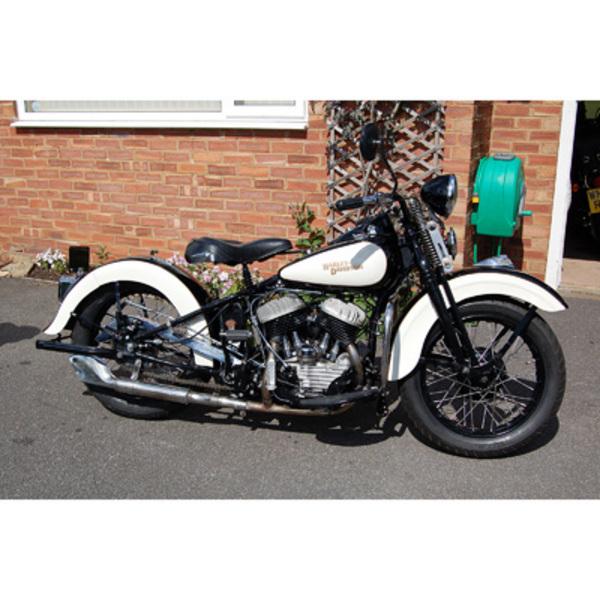 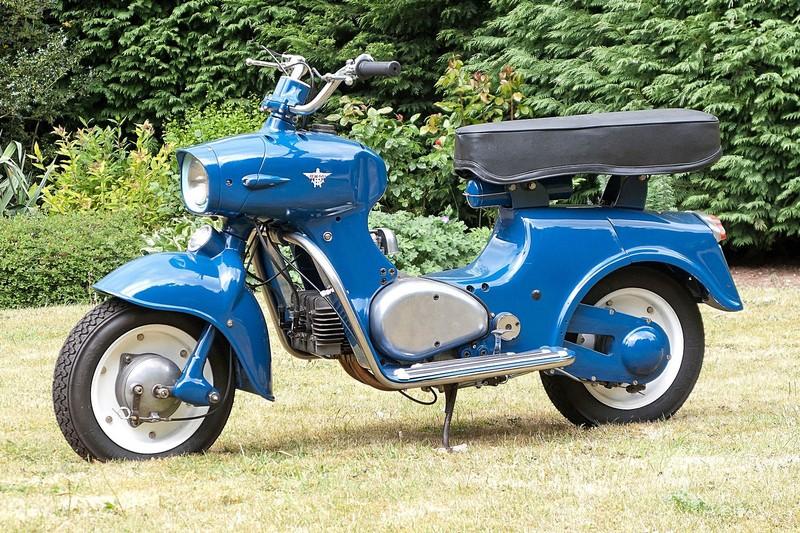 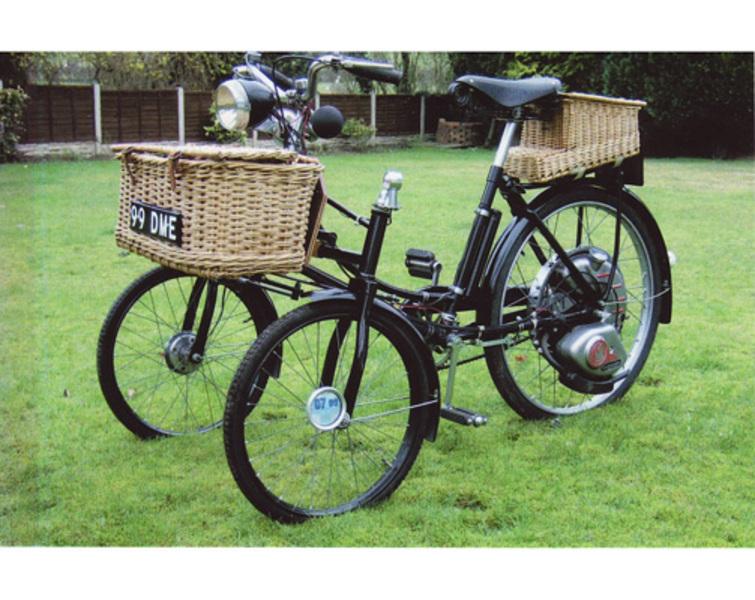 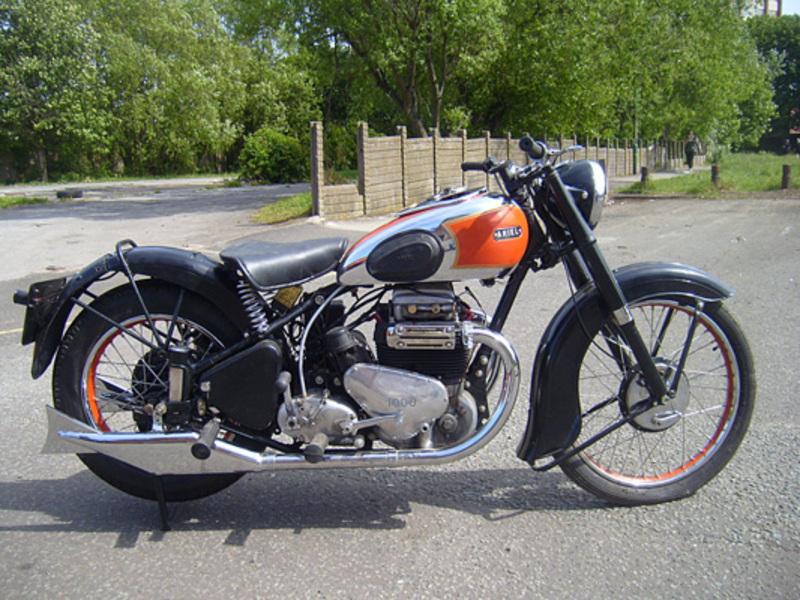 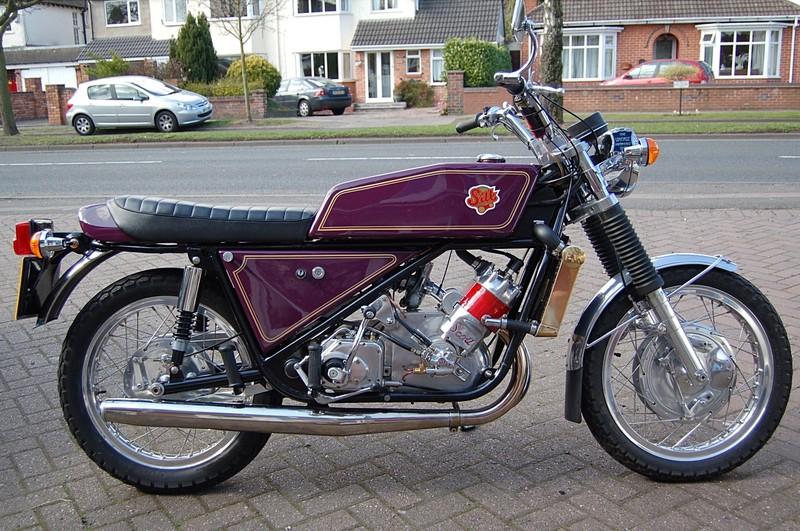 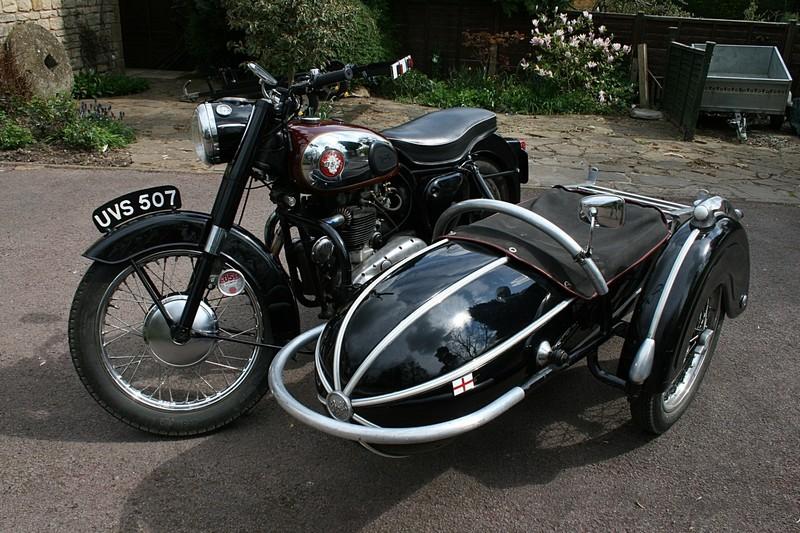 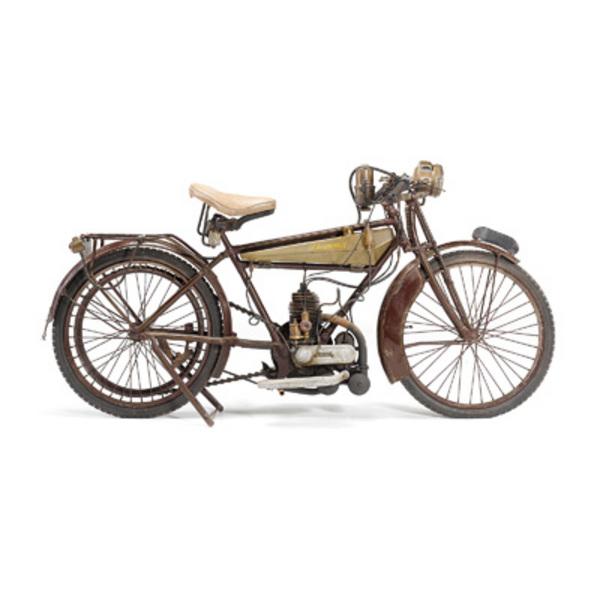 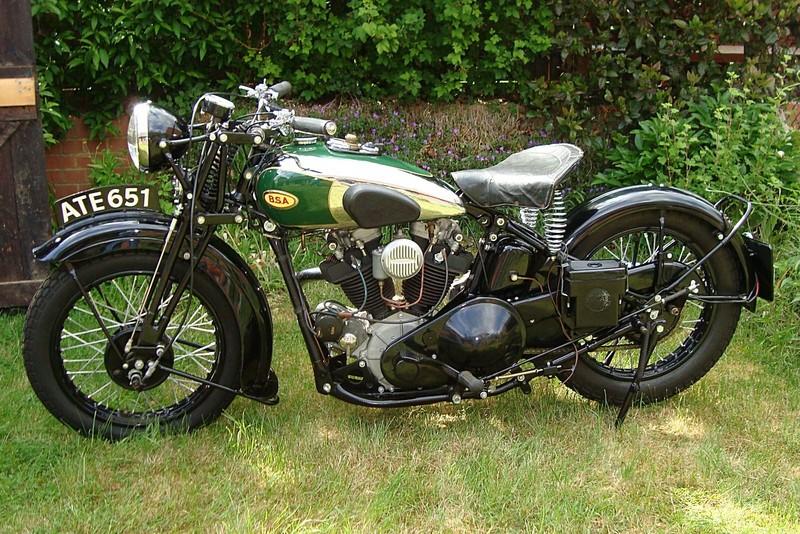 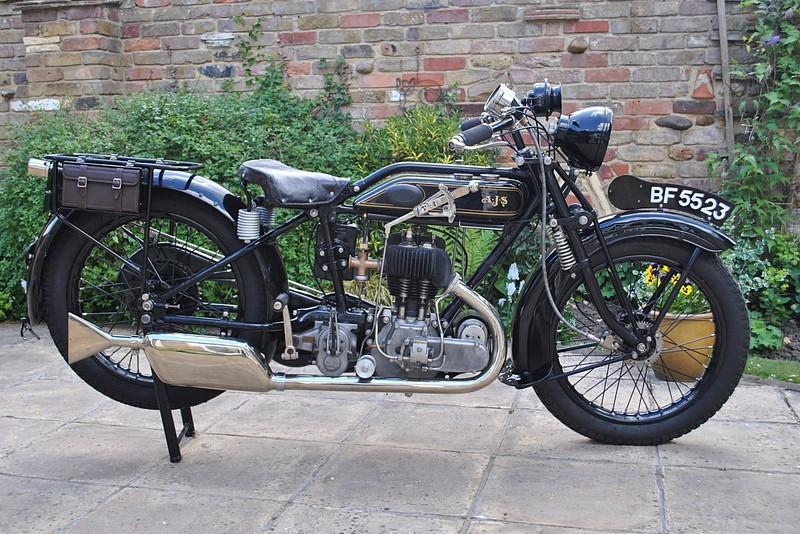 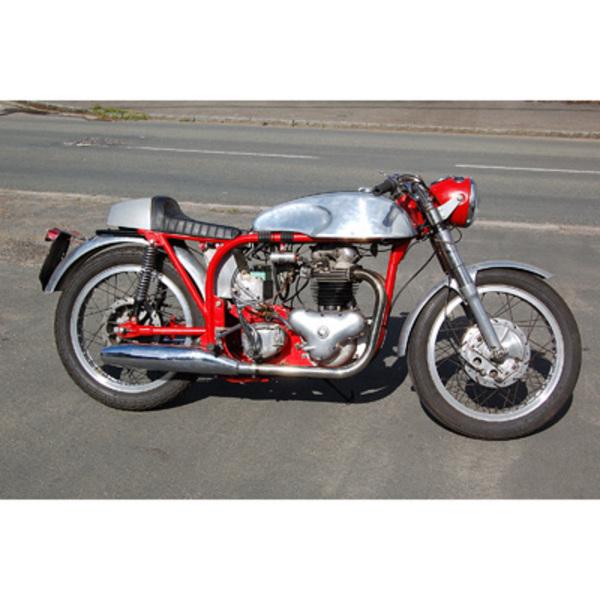 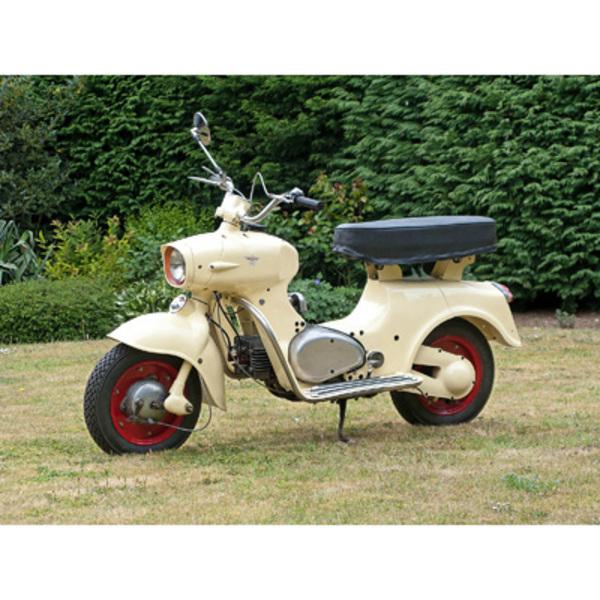