Kawasaki has updated its fresh Z900 for 2020, strengthening the goldilocks ‘just right’ bike that replaced the Z800 and Z1000 in a single swoop.

The styling remains contemporary, flashy even, with glossy paint, stickers (that fuel tank has also had a tweak) and yet a conventional, easy-going flat handlebar layout and 31.3-inch ride height. The LED front headlight is different now, and the shrouds have shrunk ever so slightly. It really does look quite the business in person with plenty of appeal.

But the changes don’t stop there for 2020. There have been revisions to the suspension, which is firmer now, the engine has an ever-so-minor change, and there’s a load of electronic riding aids packed in.

Headlining those changes are not just ABS but also changeable traction control settings, customisable ride modes, power modes, and a flash 4.3-inch colour screen to control those settings plus Bluetooth connectivity. With Bluetooth, you can track your ride and data using Kawasaki’s Team Green Rideologoy app. It’s one of the best display /control units that I have used due to its brightness and clarity..

As flash as it sounds, the chassis remains the same (and it was already good), with even stronger tubing around the swingarm to improve handling. And as a bike in traffic and commuting, the mirrors are in a good position with clear rear vision, and the handlebar and levers feel comfortable. Perhaps the ride height, at 31.3-inches, lower than what the Z1000 has, is a little low set for tall riders on extended trips. For me at 5:10 the height was fine however it could feel a little cramped at times if you were your over six-foot tall and tucked in for a long ride, but it also quite handy for easy foot planting town.

And Kawasaki delivers in the way it does so well – the Z900 has a great build quality, it feels good to ride (and looks good) and is priced well. The electronics and integration for connectivity are also very cleaver.

Sure, the screen and its controls do take some time to get used to. The rubberised buttons are a nice touch, but there’s a trick to figuring out which button to press and where to push on the touch capacitive screen to quickly run through all of those settings and bits of information: riding range, fuel consumption, trip odo, changing the background for both day and night setting, traction control, ride mode, power mode…the options are almost endless, which is great if you own the thing, because you’ll never tire of the depths that you can play with to get the right setup.

Some of the settings include controlling power output via modification of the engine mapping, three levels of traction control, ride modes for Rain, Sport and Road, and KTRC (traction control) over different levels, including turning the thing off.

Underneath all of that new tech is a solid 943cc inline-four cylinder engine mated to a trellis frame, producing a growling 93kW. It gives you a nice note when turn it on but if you are seeking a rumble and throaty response when you kick it over .

Revisions to the driveline for 2020 are minor, though. It’s the airbox that sees the intake funnel changed to meet ever-tightening emissions targets. But that doesn’t hurt appeal when you bang open the throttle. It delivers responsive and smooth power before about 4800rpm, which is when the engine kicks up a notch and gives a proper shove to really get moving.

Give the throttle a rip on the move and it’ll happily pull away .

While it’s not a complete mongrel and doesn’t have a wild barking attitude, it’s a well-balanced blend of polite friendliness when you just want to toddle up to the shops, and a reserve of performance that matches its sharp handling on twisting roads.

It has a great clutch feel and the throttle is rather responsive, with shifts up and down engaging quickly, though it would benefit with a quick shifter. The four-piston Nissin brakes are also stellar when it comes to wiping off speed, giving a surety at the end of a downhill blast.

The springs are now almost five per cent stiffer than before, and that delivers a bit of a hard ride on cut up city roads. It’s not ideal as a comfortable commuter over train tracks an pot holes, but once you get onto a nice road with smooth tarmac it feels sure footed and confident when leaning on it.

So, we’re impressed with the Z900 on a quick blast, but what about compared to another 900, the Yamaha MT-09? We asked our mates Dan and Jeff what they thought of the two bikes during a ride on a winter weekend with glorious weather.

Here’s what our team thinks when testing them both side by side.

•             Colours and graphics – Good options on the colours, providing quite a few different looks.

•             Instruments - The instrument display is a bit poor. It is limited in size and is not able to display what you would normally want displayed at the same time instead it is a fiddly exercise to switch and show the information you require

Comfortable but feels a little sporty and aggressive based on seating position.

Raw and powerful. It feels like it wants to go fast and it does.

A fantastic sounding (even with stock exhaust) triple.  Its an exciting bike to ride - it wants to go fast and feels like it needs to be tamed a little

Good handling at corners but low speed tight corners can be a little jerky.

This is a great looking aggressive street bike and very good value for the money. I love the raw energy and sound from the triple engine. There are definitely a couple of improvements that could have been made (display, indicator and horn locations and number plate mount), but this is just such a fun bike to ride. If you want something that wants to be ridden hard and is going to put a smile on your face each time you ride it then this is a good bike.

•             Fit and finish – Great aggressive looking bike. It looks complete. I prefer a tucked away exhaust, but this is still good looking for stock.

•             Instruments - The instrument display is very impressive (class leading) it’s full colour and is well laid out with all the information you require easily visible.

Quite comfortable as has a very neutral seating position.

Smooth with some more bark higher up the rev range.

This bike has plenty of power but feels so smooth. It misses having a quick shifter though.

Great handling. It almost feels as though its riding you as it is so smooth from take off through corner etc

This is a great looking aggressive street bike. It is so smooth and easy to ride yet has plenty of power.  The finish is excellent and the display is class leading.  If you want a bike that will be good for around town as well as taking out on the weekends -and that is really effortless to ride - this would be a great bike for you.

I think the Kawasaki is the more complete bike, based on some of the small things like the rider lay out and display. It’s also very refined, smooth and easy to ride. However, there is just something about the sound and the performance of the Yamaha that draws me towards it. Whilst I would love a couple of the features that the Kawasaki has, the Yamaha has the thrill factor that i don't think the Kawasaki can compare to.

Yamaha - Someone looking for a bit more of a thrill should buy this bike.

Kawasaki - Someone looking for a smooth easy to ride all-rounder should buy this bike. 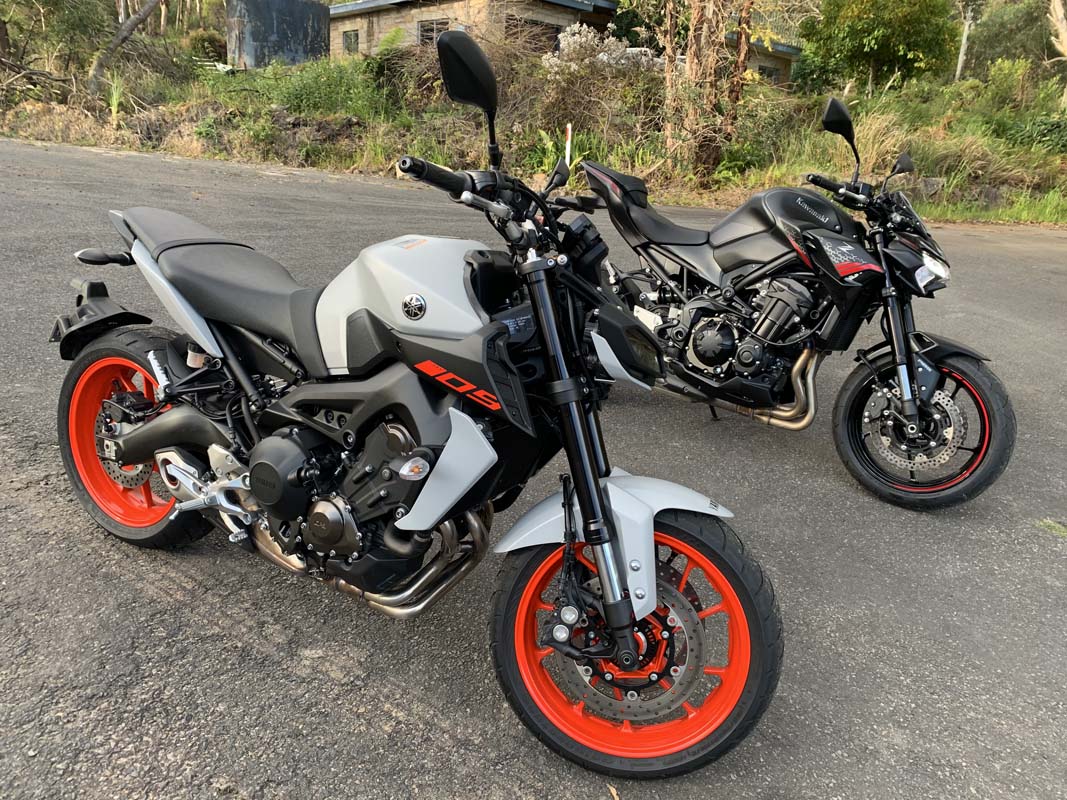