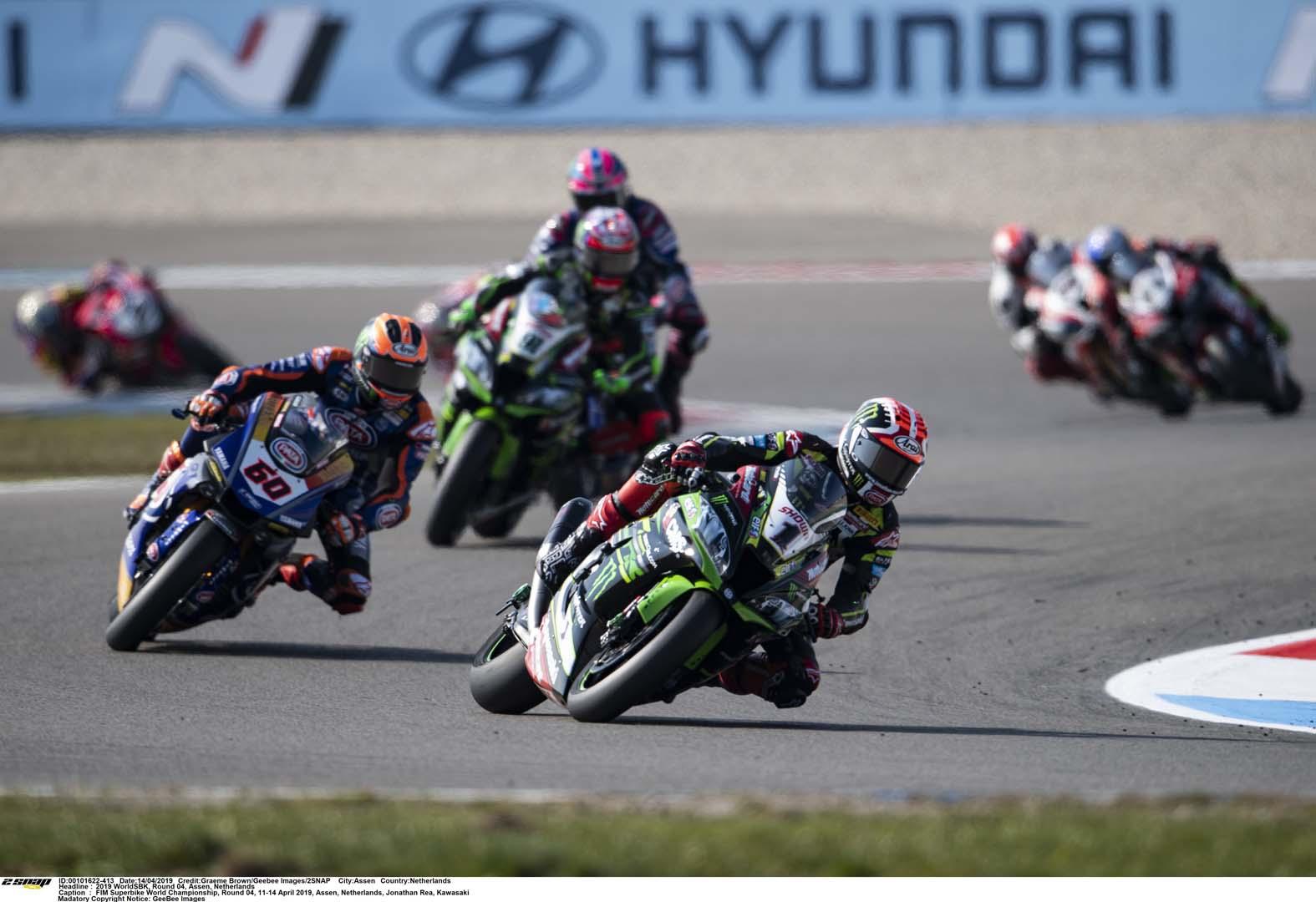 Cold conditions at Assen got worse on Saturday, then ridiculous when a snowstorm hit the circuit as riders were readying for Race 1. Before that drama, Bautista had claimed pole ahead of van der Mark at his home track and Reiterberger. Rea’s Superpole run was compromised by a red flag partway through the session and he would grid up in eighth, but he had outpaced Bautista in all the FP sessions.

With no break in the conditions, Race 1 was rescheduled to Sunday morning and the Tissot Superpole Race abandoned.

It was just as cold, but at least dry at ‘The Cathedral’ when Race 1 finally got underway.

Once again, Bautista went out hard early, taking the lead on the first lap and showing no signs of the reduced rev limit.

That left Reiterberger and van der Mark to fight for the remaining podium places. The German held the advantage for a handful of laps, but Rea was on a charge: up to fifth from eighth at the end of Lap 1, third at the end of Lap 2 and second by Lap 8.

Positions had settled midway through the 21-lap race, with the only notable changes being a see-sawing battle between Lowes and Haslam for fourth.

Bautista was victorious again, the first Ducati rider to do so at Assen in seven years, also setting a new record for consecutive wins at the start of the season. Second-placed Rea could take some solace from the fact that the margin was much smaller than in previous rounds.

With no Tissot Superpole Race, starting positions were the same for Race 2 and the result proved to be almost the same, too. However, the final results don’t show that Rea rocketed to the lead from eighth place on the opening lap, while Bautista was busy holding off van der Mark.

An aggressive inside pass by Bautista for the lead on Lap 6 rattled Rea, who fell back to fourth, but he rebounded to regain second - at van der Mark and Davies’ expense – within a lap.

Fast laps from van der Mark saw him eventually rewarded with second place, despite a desperate lunge from Rea that saw the pair collide. 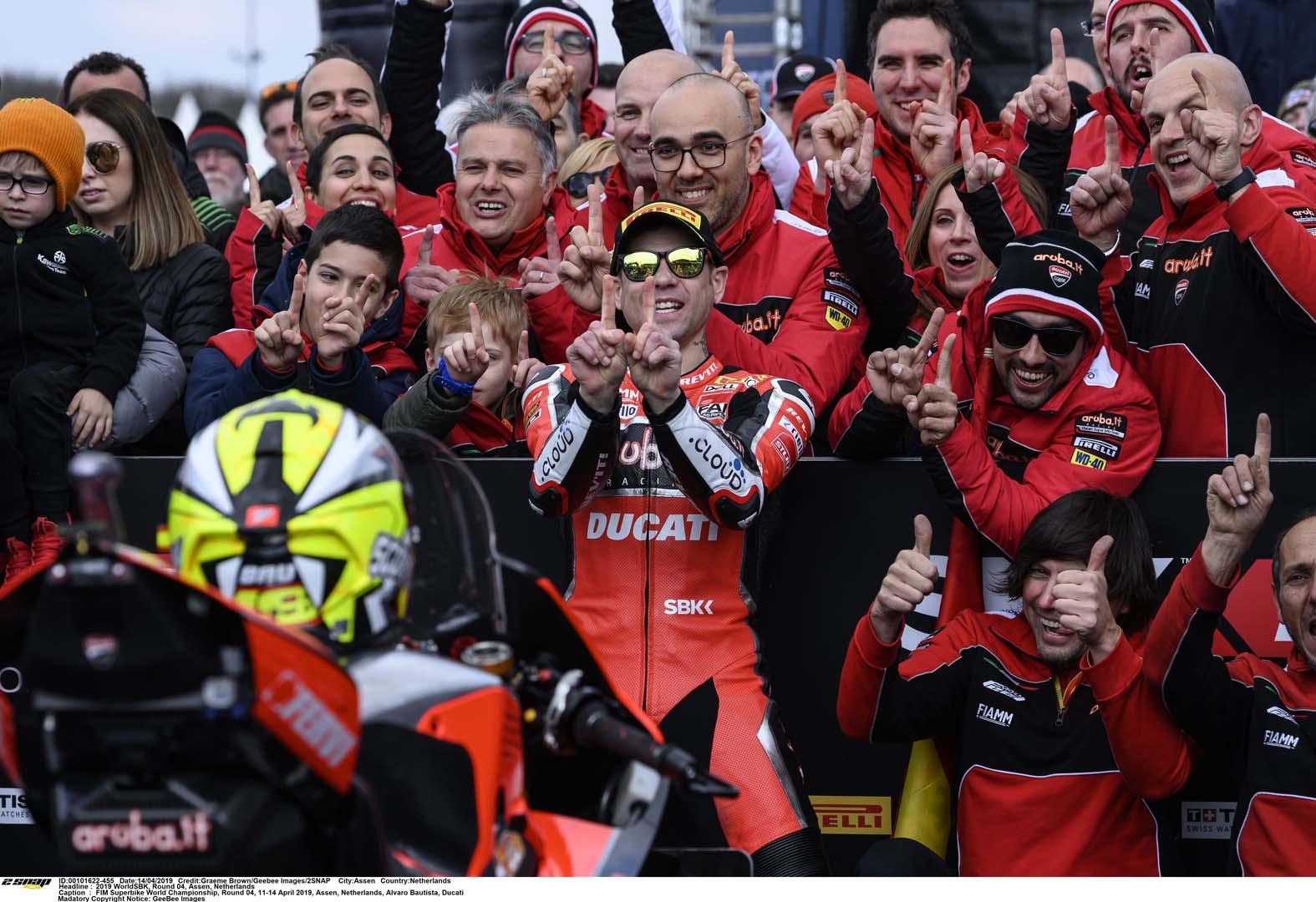 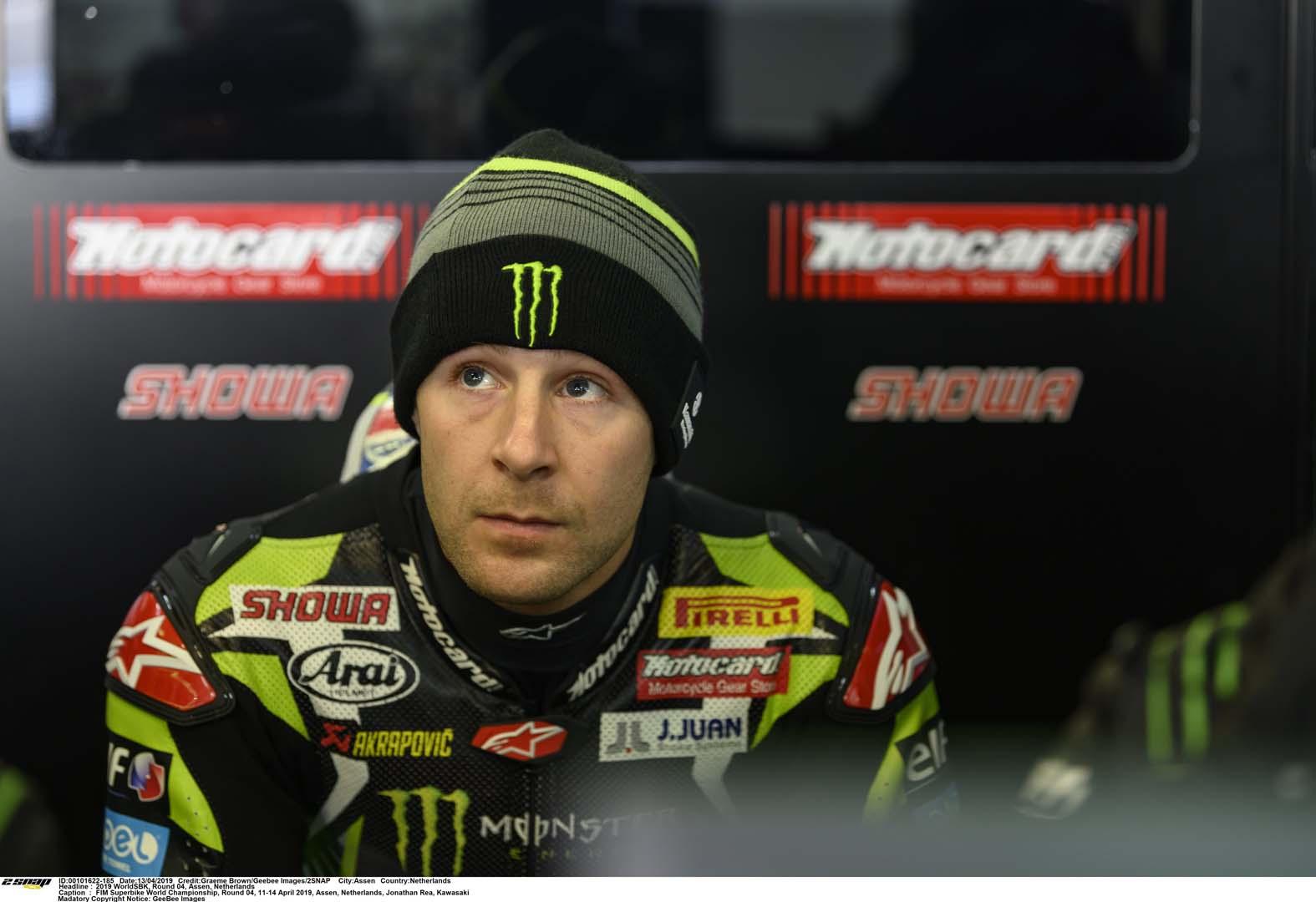 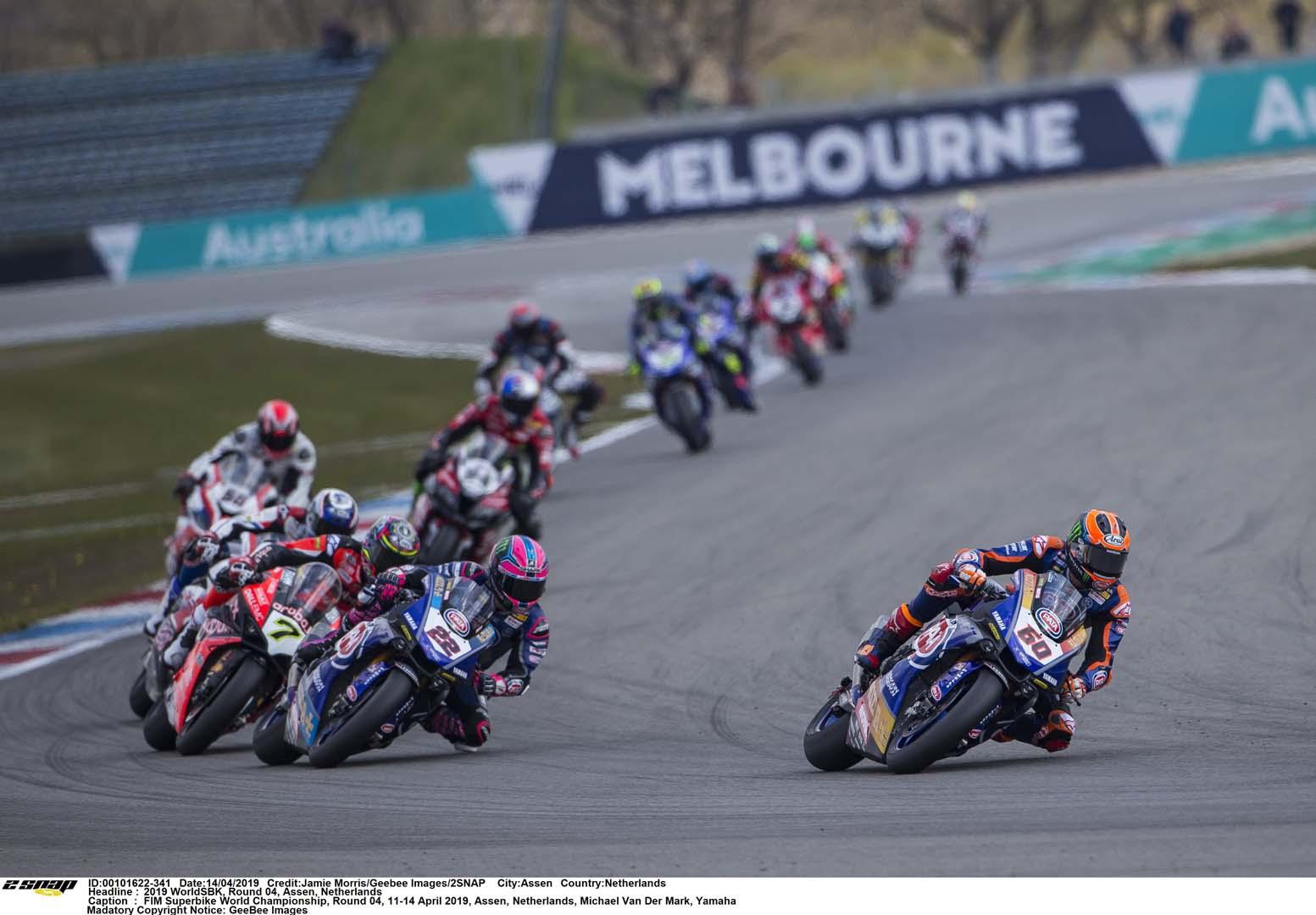 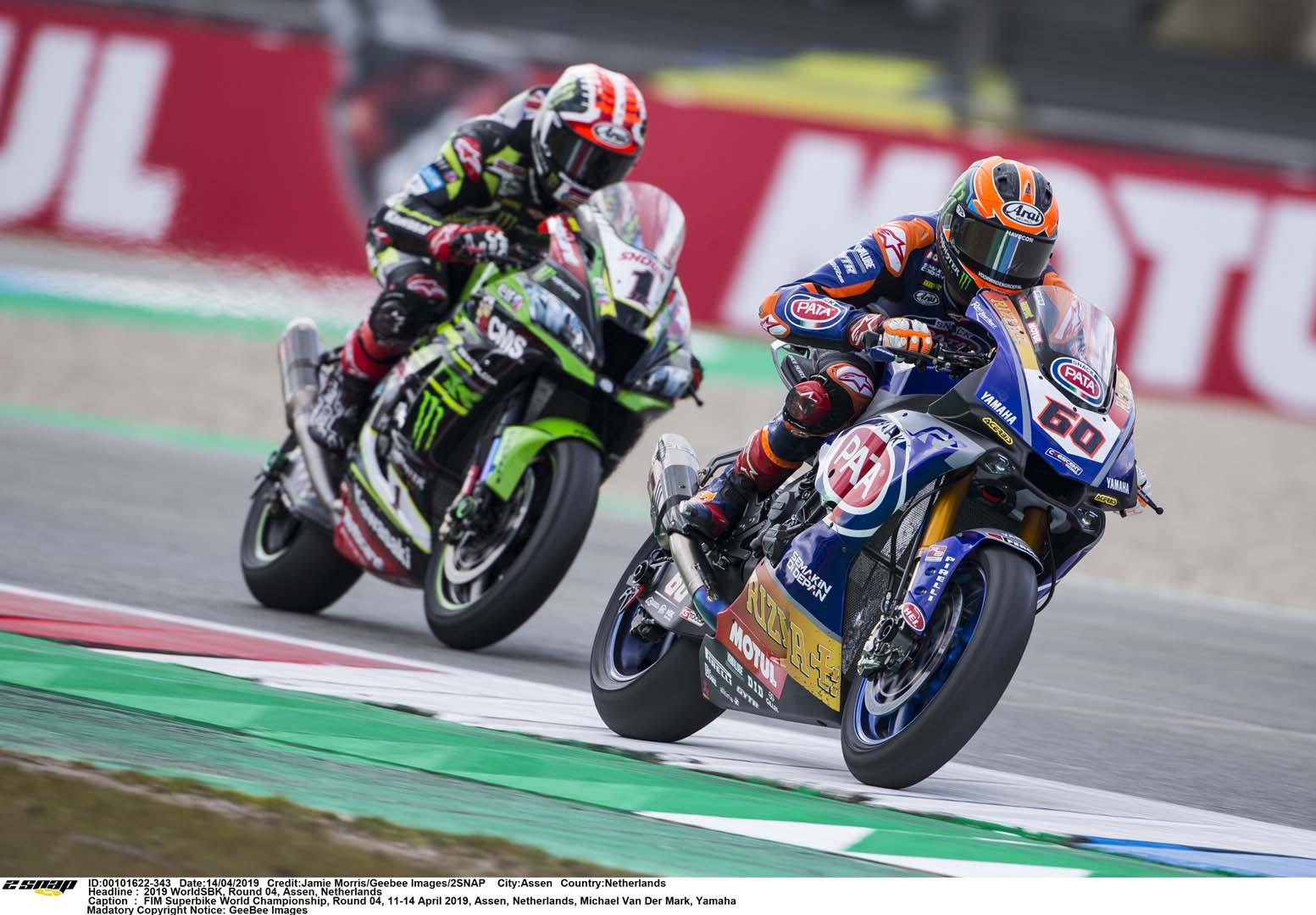 Bautista’s winning streak finally came to an end at this round, Rea breaking through for his first victory of the 2019 season at a track he’s very familiar with but Bautista has never raced at.

While he topped all the Free Practice sessions, Rea actually finished second in Superpole, the meat in a Ducati sandwich of poleman Davies (whose 1m45.180s was a new circuit lap record) and Bautista.

Laverty’s weekend ended early with a heavy FP1 crash that fractured both wrists, while Camier was also out for the round after a collision with Cortese in Superpole left him with an injured shoulder.

In more pleasant weather than Assen, Race 1 got underway with Rea taking a lead after Davies retired on the opening lap. Sykes was in contention, close behind Bautista, with van der Mark slightly further back.

As Rea built his lead with each lap, Bautista was starting to break away from Sykes, while the factory Yamaha pair were fighting amongst themselves before Lowes, battling illness, started losing position from Lap 8.

When Sykes retired on Lap 10, van der Mark inherited the final spot on the podium, but lost his place within a lap when Razgatlioglu pounced. In a battle that saw the pair trade aggressive passes and collide twice on the penultimate lap, Razgatlioglu prevailed to take his first podium since last year’s Argentinian round.

Despite the win, Rea didn’t regard himself as being back in championship contention yet. That may have changed when he won the Tissot Superpole Race.

On a damp track, the sprint race started with Davies grabbing the holeshot from Rea, while Sykes had to start from pit lane after missing the warm-up lap. A mistake from Davies at the end of the opening lap allowed both Rea and Bautista through, with Rea holding a 1+ second margin for the remainder of the sprint. As Sykes was carving his way through the field, Davies regained second place while Bautista was drifting back on a deteriorating rear tyre.

Rain forecast for Sunday came in force after the World Supersport race. Following several delays, continuous rain and sheets of water covering the track forced Race 2 to be abandoned.

Rea’s wins cut 10 points off Bautista’s championship lead, but the cancellation of Race 2 meant there was no opportunity for either rider to improve their position: Bautista on 263 points and Rea on 220. 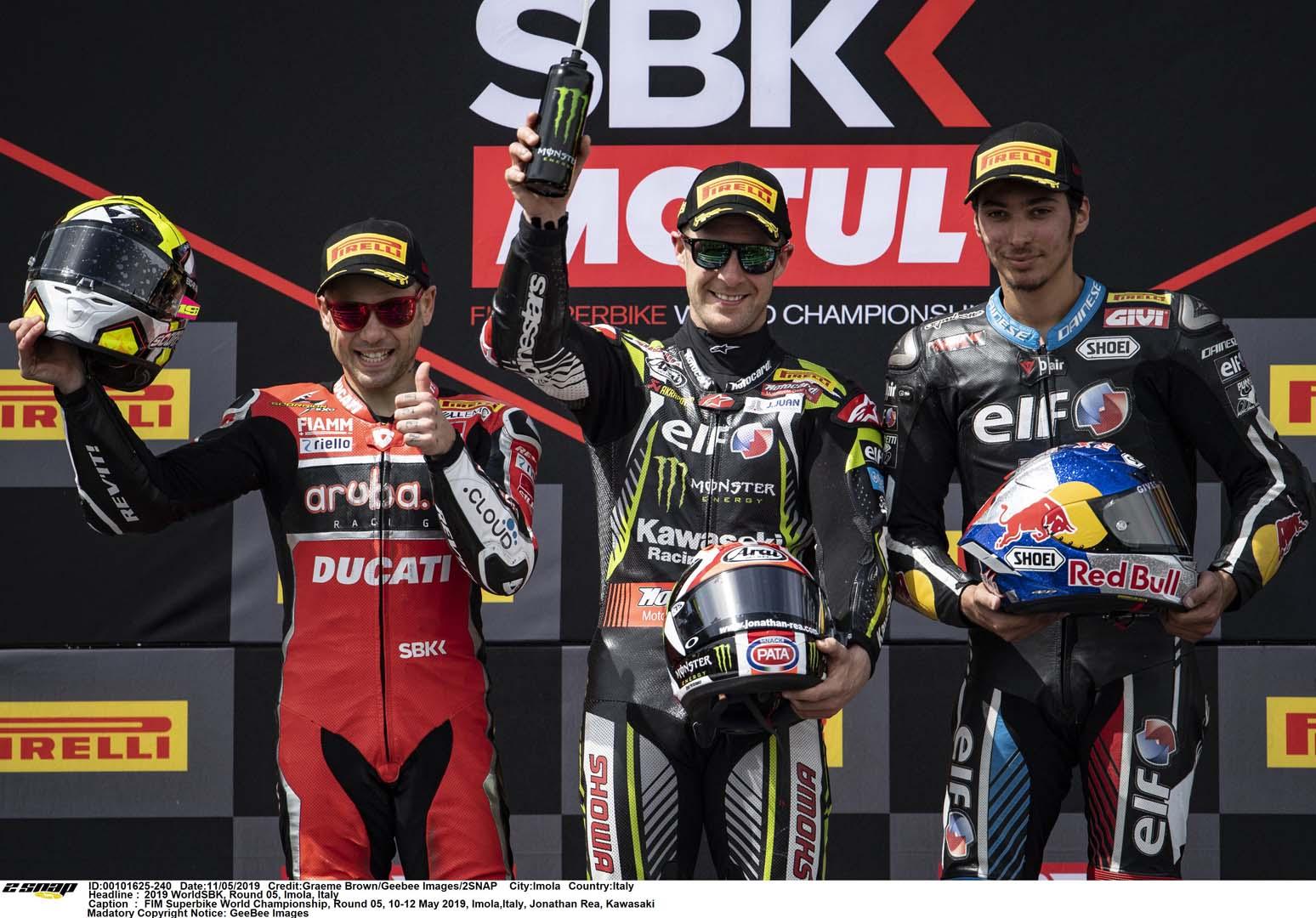 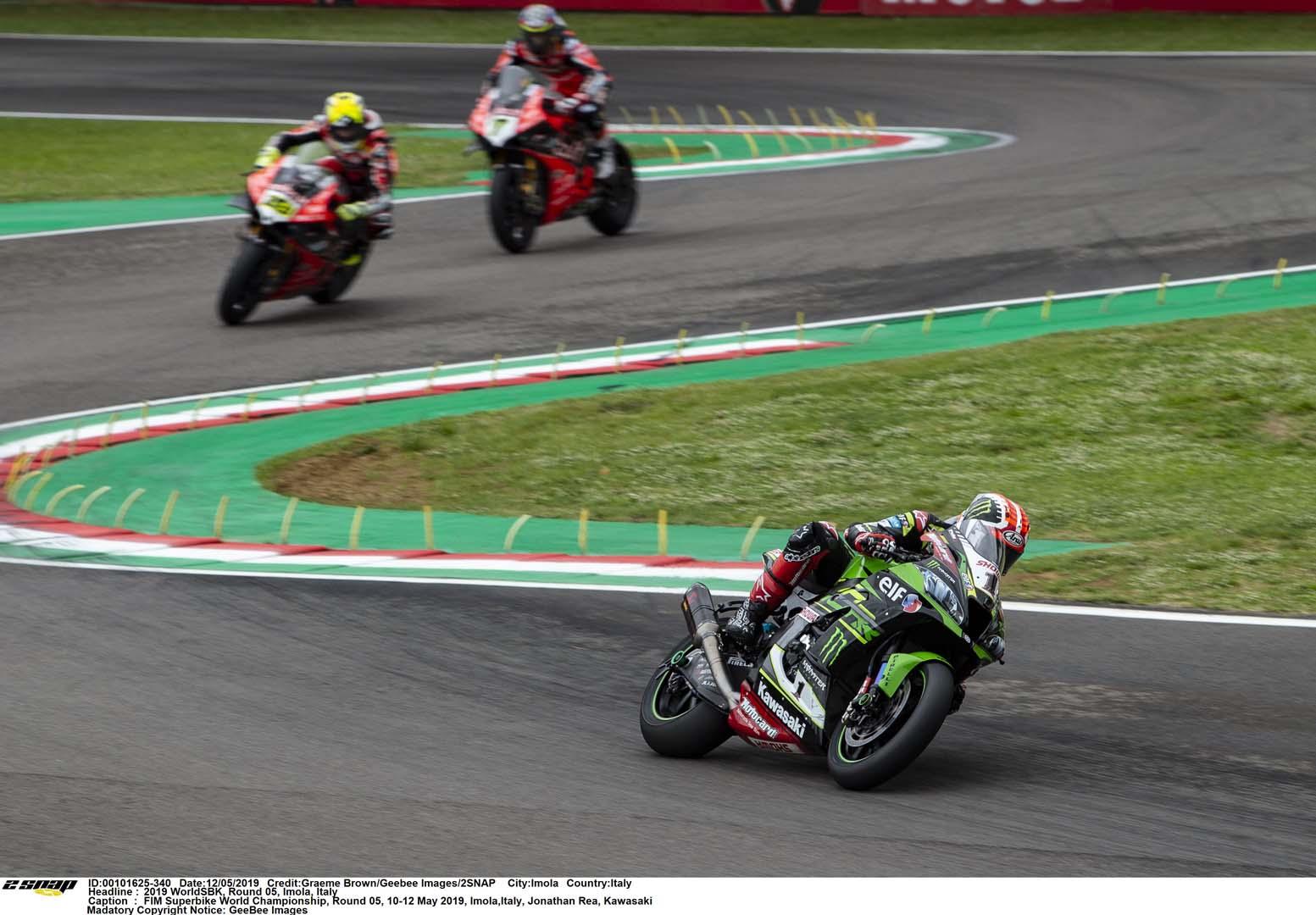 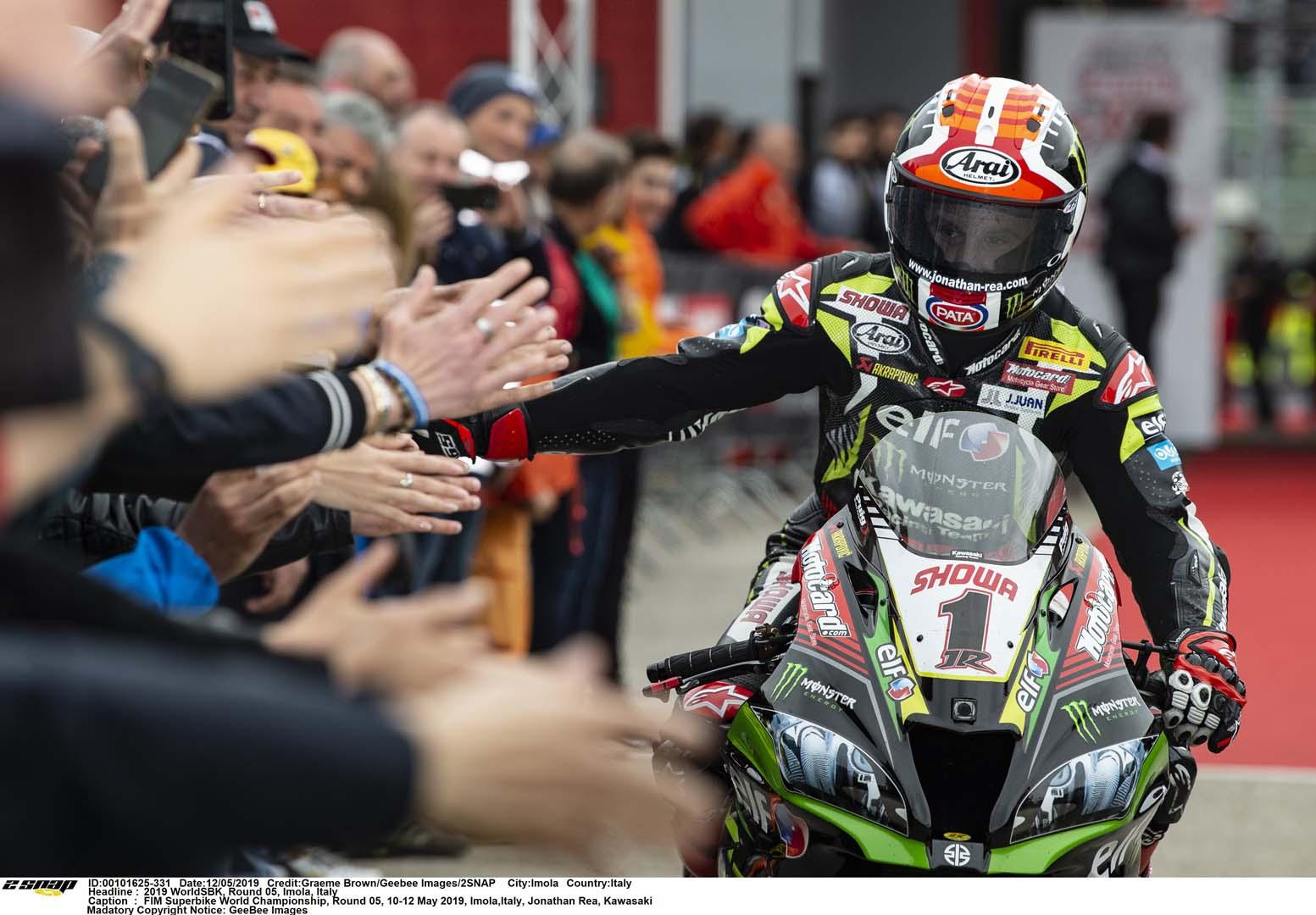 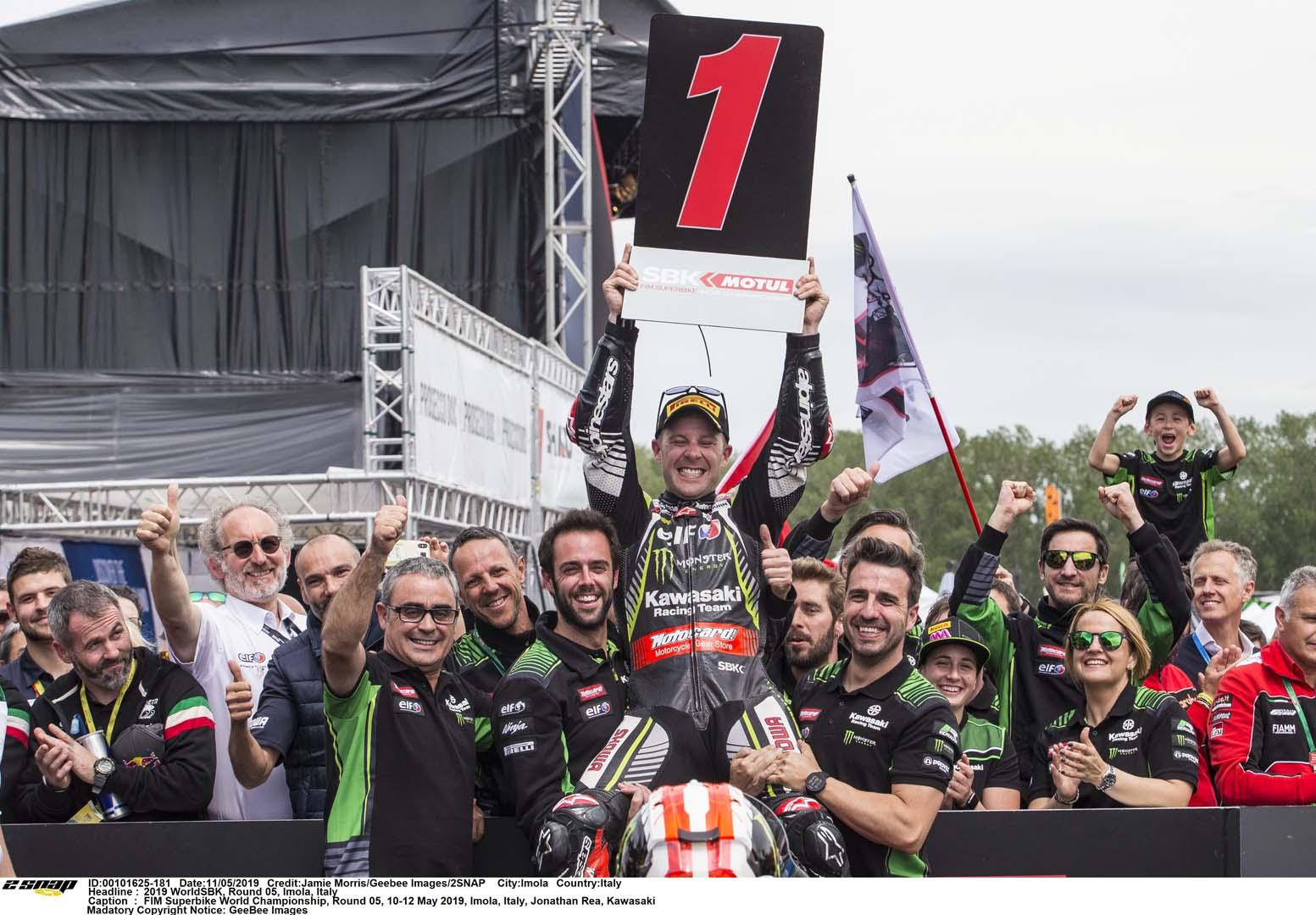 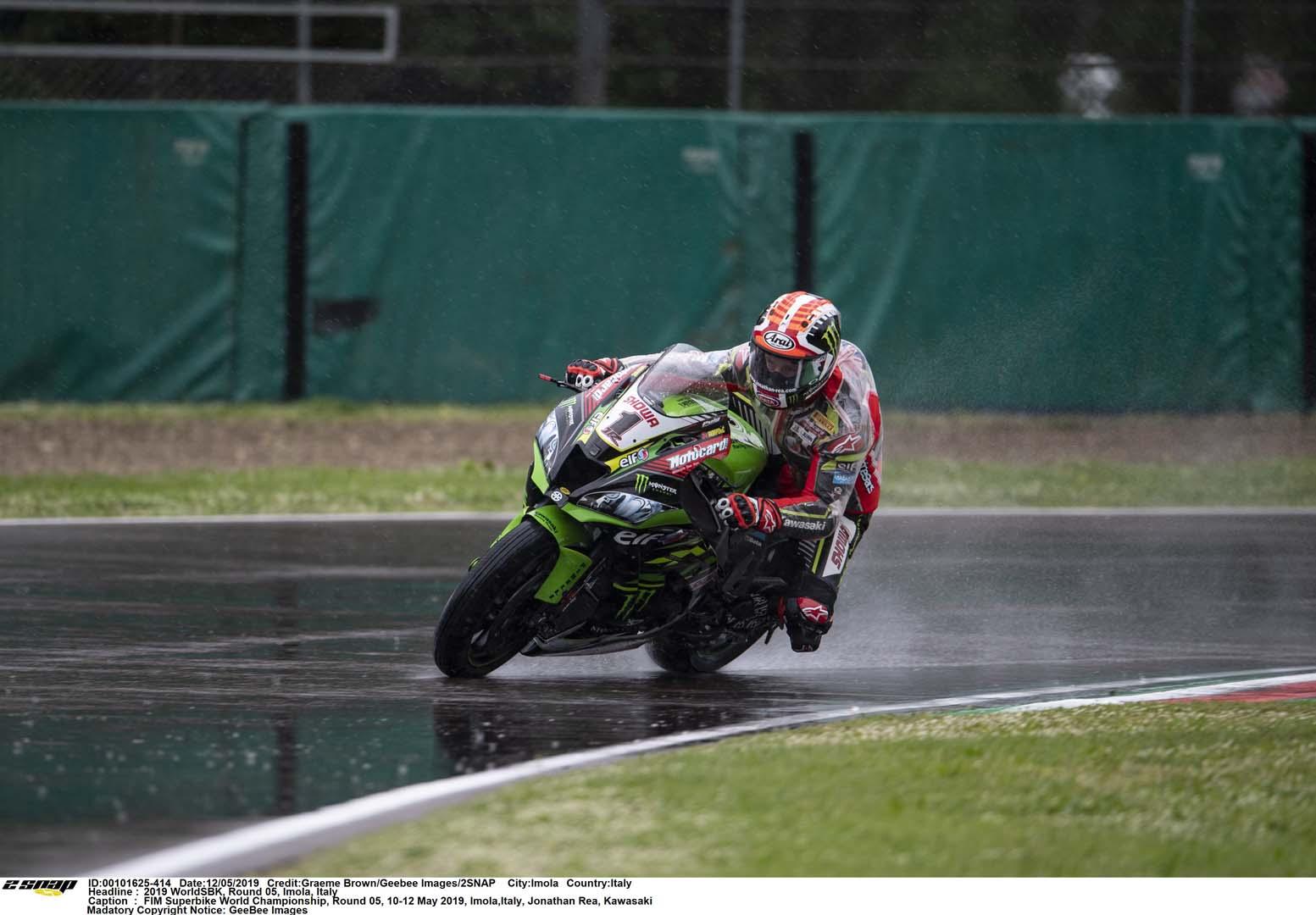 This round saw Ten Kate Racing back in the paddock after their controversial dumping by Honda last year. Announcing their return at the Assen round, the vastly experienced Dutch team arrived in Jerez with a Yamaha YZF R1 and rider Loris Baz.

Good weather conditions greeted the field across the Free Practice sessions and Superpole, where Rea just eclipsed Bautista with a 1m38.247s lap, which was also a new circuit record. Melandri completed the front row of the grid, with Lowes, Haslam and Sykes on row 2.

In hot conditions, Race 1 at Jerez was an aggressive affair, with Rea getting the holeshot, but Bautista regaining the lead soon after. Lowes and van der Mark were duelling with each other initially, but both managed to pass Rea by mid-distance. Rea regained the initiative over Lowes on Lap 14, only to lose it again three laps later.

Behind this group, the battle between Razgatlioglu and Melandri was just as dogged: the Italian arguably revitalised to achieve good results after announcing this WSBK season would be his last.

Bautista, meanwhile, was again untouchable at the front, cruising to a 7+ second victory.

In a controversial finish, Rea’s last-lap last-corner collision with Lowes saw him penalised one place, dropping to fourth and relegated to the back of the grid for the Tissot Superpole Race.

The Superpole Race proved to be another procession for Bautista. Melandri’s efforts to stay on the tail of the Spaniard were in vain and Lowes crashed again, this time unassisted. Rea, meanwhile, had to thread his way through the field and would finish in fourth place.

Bautista’s championship lead had grown to 61 points ahead of Sunday’s Race 2, which started with Melandri getting the holeshot and Lowes crashing again on Lap 1. When Bautista crashed on Lap 2, his first race crash in WSBK, it opened up the field. Melandri never capitalised, though, crashing into Davies on Lap 5, ending both riders’ races.

That put Rea in the box seat for the win, but van der Mark had other ideas. Passing the Ulsterman on Lap 7, van der Mark held off Rea for another seven laps, then started to build a lead.

When the red flags came out for Kiyonari’s crash on Lap 18, van der Mark had secured his first race win of 2019, while Rea had carved a valuable 20 points off Bautista’s championship lead – leaving Jerez with 259 points to Bautista’s 300.