Any doubts over the ability of Alvaro Bautista (Aruba.it Ducati) to replicate his form from the pre-season tests were dispelled when he topped the timesheets in Free Practice 2 and 3 after Jonathan Rea (Kawasaki Racing Team) had been fastest in Free Practice 1.

Unlike last year at Phillip Island, conditions were dry and mild on the opening days, continuing into Saturday’s Superpole session where Rea recorded a rare Superpole win, his 1m29.413s lap setting a new circuit record and putting him on pole ahead of Haslam and Bautista. Sykes led the second row, alongside Alex Lowes (Pata Yamaha WorldSBK Team) and Sandro Cortese (GRT Yamaha).

Aussie wildcard Troy Herfoss (Penrite Honda Racing) missed the 107% qualifying cut but was still allowed to line up on the grid.

Race 1 got underway with Rea getting the holeshot but Bautista had the lead before the end of the opening lap. From there, the Spaniard put on a simply jaw-dropping display, not only leading every lap, but building upon that lead with each lap of the 4.445km circuit.

Behind him, Rea and Haslam were duelling for second place; a battle that went the way of Rea when Haslam crashed at Turn 4 on Lap 13.

The opening race was all about Bautista, though. It was only on the final circuit that the rookie slowed down, but even with that, his winning margin of 14.9 seconds was the greatest in a dry WSBK race in Phillip Island history. Rea simply had no answer for Bautista’s dominance.

Completing the podium was Marco Melandri (GRT Yamaha), who made a late race charge to pass Sykes and Toprak Razgatlioglu (Kawasaki Puccetti Racing), before overtaking Lowes on the penultimate lap. 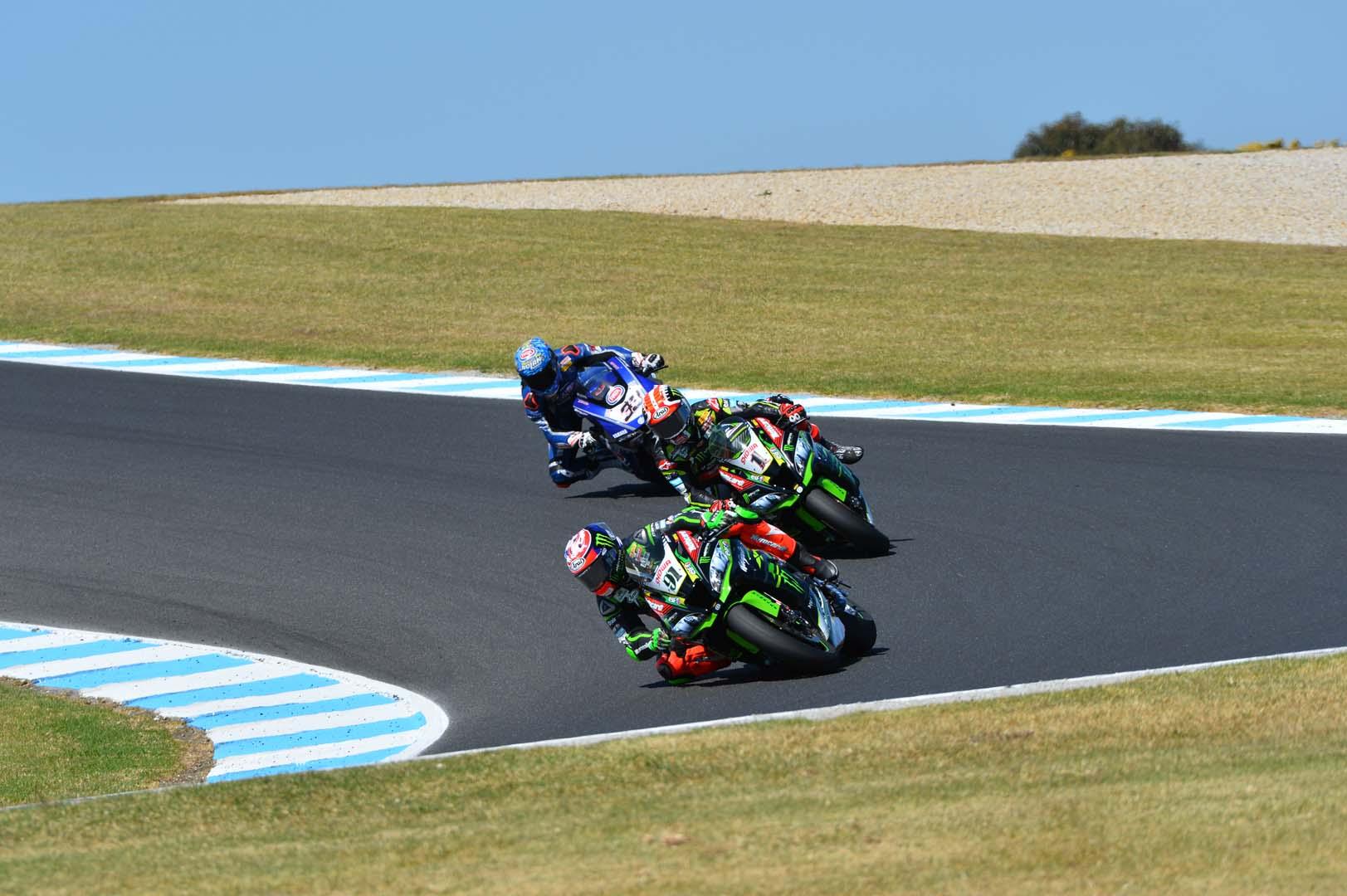 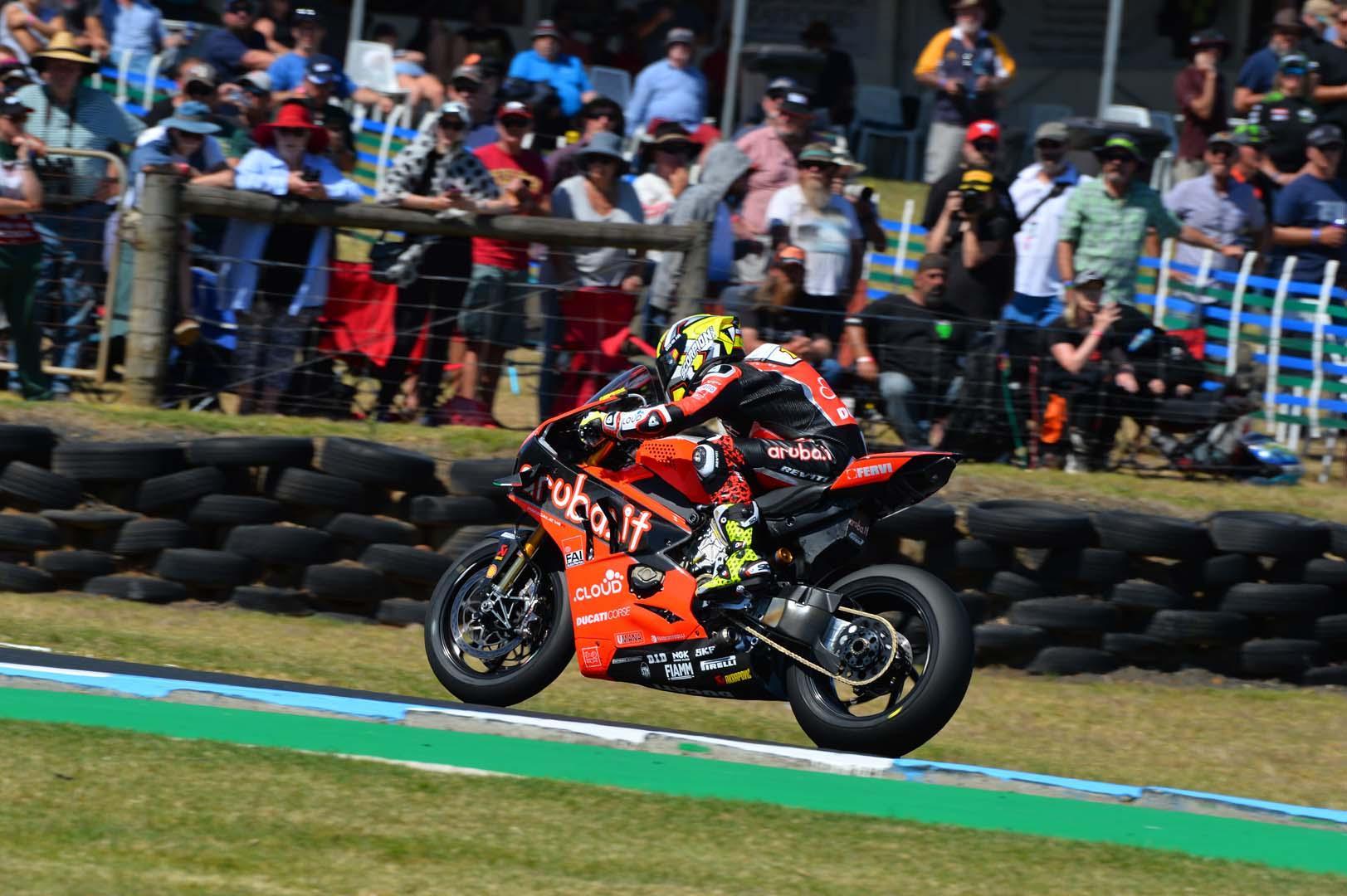 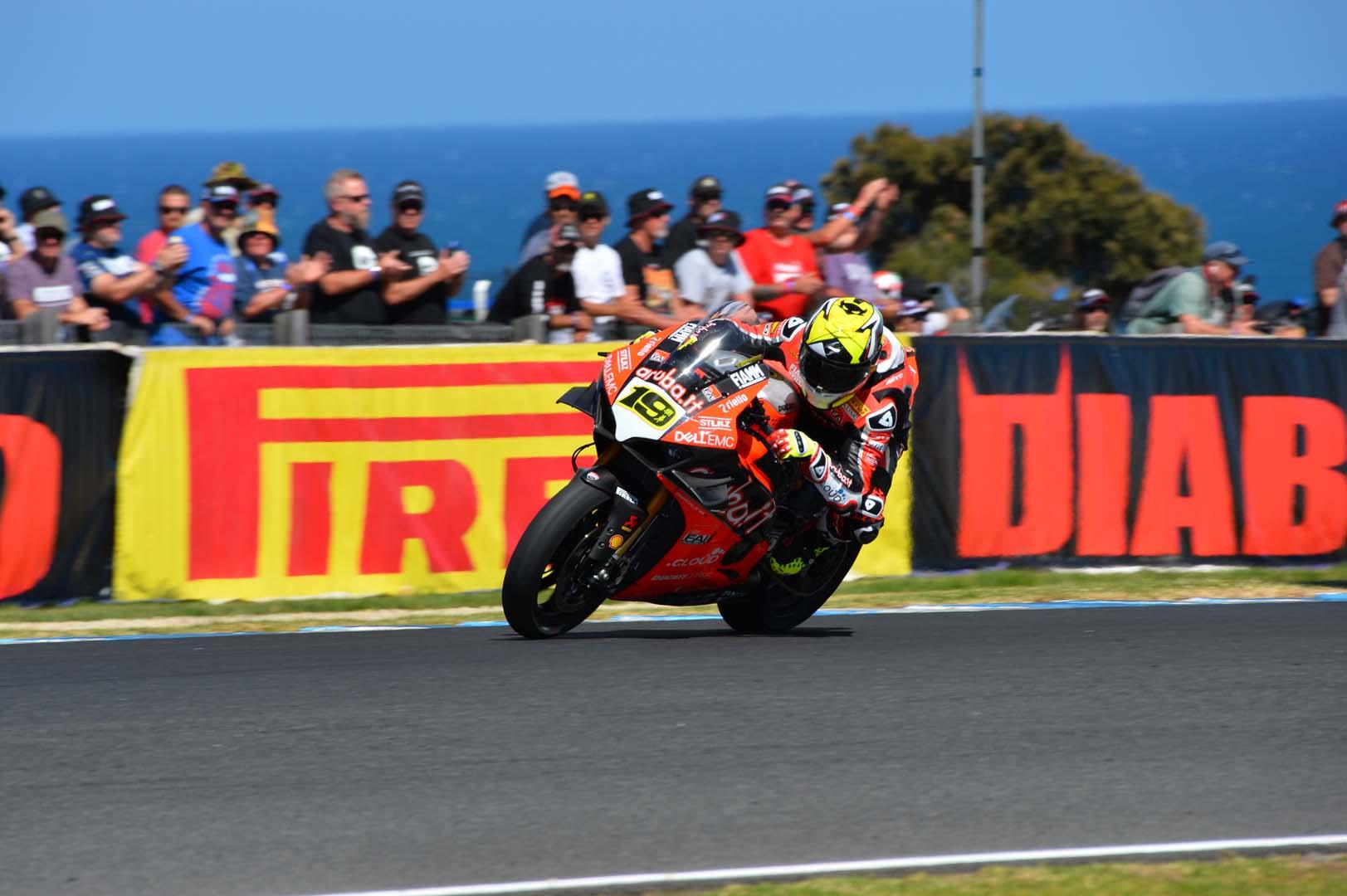 Sunday saw the debut of the Tissot Superpole Race, which proved to be a tougher assignment for Bautista than the previous day’s outing. Rea led the opening lap but couldn’t shake Bautista, who took the lead on Lap 2. Rea’s best efforts – including a new race lap record of 1m30.075s – weren’t enough to prevent Bautista making history as the first Tissot Superpole Race winner. Rea and Haslam completed the podium, with the following six placegetters lining up in the same position for the start of Sunday afternoon’s Race 2. Herfoss finished in 16th place.

In much warmer conditions than the day before, Race 2 saw Bautista put on what was virtually a carbon copy of his performance from the previous day’s 22-lap race.

Building a margin over the chasing pack early, Bautista added to it with each lap; ahead by more than 9 seconds midway through the race and more than 12 seconds at the chequered flag.

Rea and Haslam were the chasers once again, completing the podium ahead of a tight pack that included Lowes, his team mate Michael van der Mark and Melandri.

Tenth in Race 1, Chaz Davies (Aruba.it Ducati) was seventh in Race 2 behind Melandri, while Sykes had a shocker, finishing 13th. Delbianco crashed out on the opening lap, with Razgatlioglu and Herfoss mechanical retirements.

With a perfect scorecard from his WSBK debut, Bautista left Phillip Island with a 13-point lead over Rea. 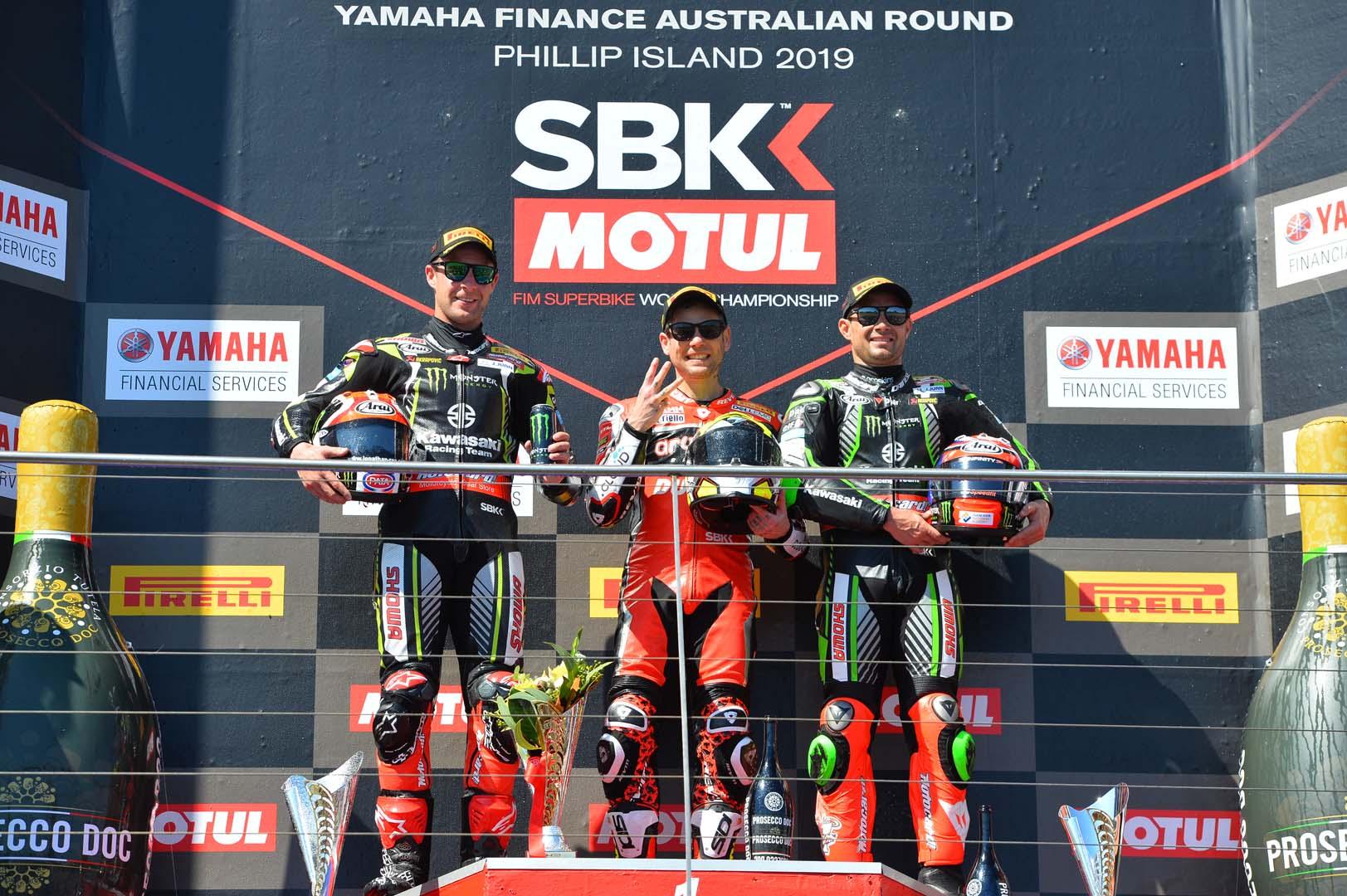 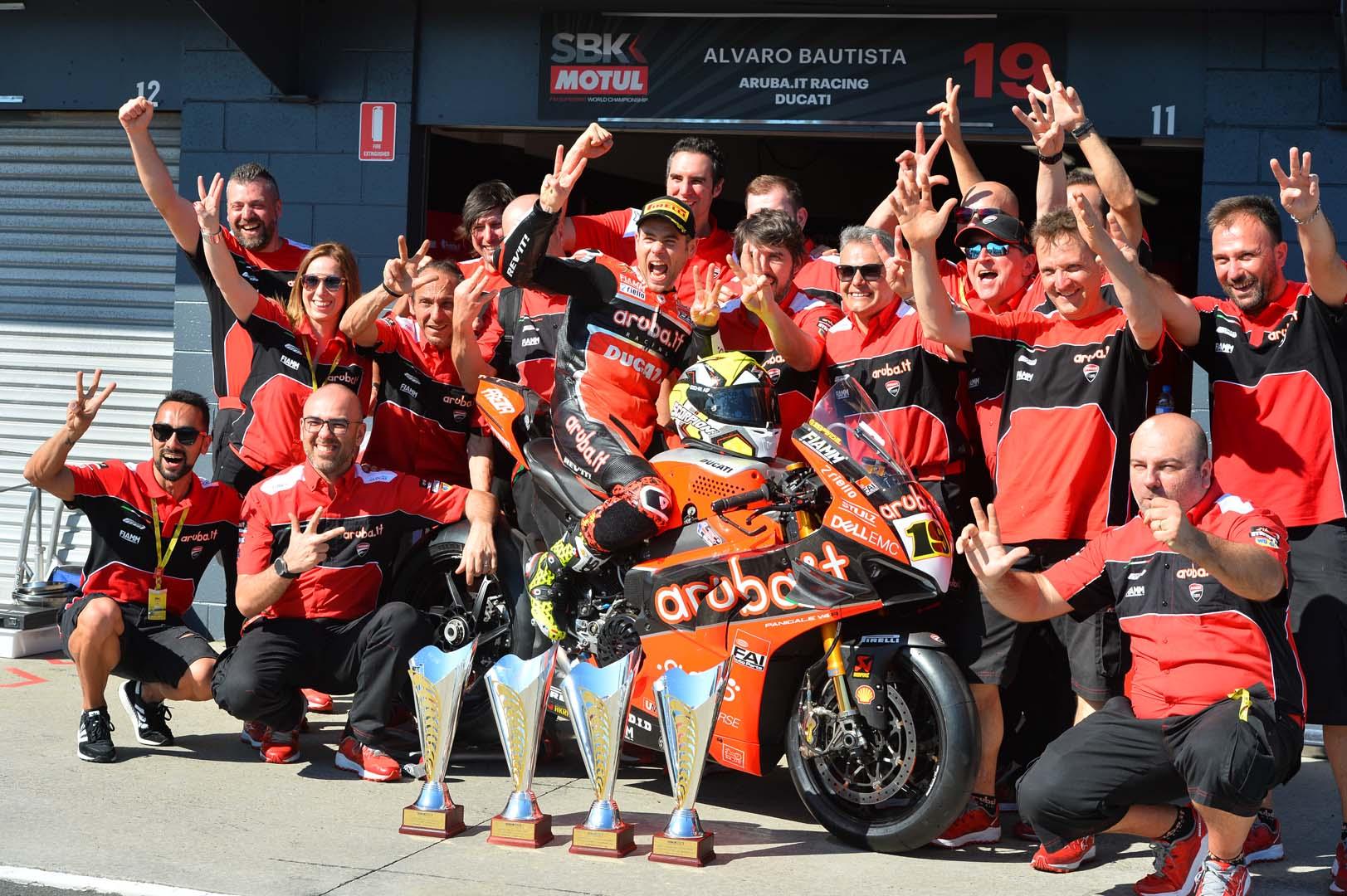 Rea has been the man to beat at Buriram in the past, and that’s exactly what Bautista did!

In typical Thai heat and humidity, the Spaniard topped all three Free Practice sessions, then claimed Superpole with a new circuit record lap of 1m31.912s.

In 35-degree heat, Race 1 started with Bautista getting a flying start from Rea, van der Mark bolting from tenth on the grid to fifth and Sykes benefitting from off-track excursions by Cortese and Melandri – all on the opening lap.

A collision between Rea and Bautista on Lap 3 almost ended the race for both riders, allowing Lowes to briefly take second before Bautista counterpunched.

When Bautista took the lead on Lap 9, a reply from Rea was expected, but the Spaniard’s meteoric pace meant that a margin of less than half a second had stretched to more than eight seconds by the finish. The battle of the factory Yamahas for the final podium place went the way of Lowes, with Haslam and Melandri having their own battle much further back.

Eugene Laverty (Team Goeleven Ducati) crashed out heavily on Lap 3, with Davies crashing on lap 9, but able to rejoin.

The Tissot Superpole Race was red-flagged after six laps when Thai wildcard Thitipong Warokorn collided with Camier. Bautista was holding a narrow lead over Rea at the time, with Lowes in third for his second podium of the weekend. Behind this trio, you could have thrown a blanket over Haslam, Melandri and Cortese.

Aiming for six wins from six starts, Bautista lined up on pole for Race 2 under the new Superpole Race result rules, then banged out another dominant performance in the Thai heat.

Just like he did at Phillip Island, Bautista built on his lead with each lap; a lead that Rea simply couldn’t challenge. The defending WSBK champion also had his hands full fending off Lowes in the early stages. The main battle was for fourth between van der Mark, Haslam, Melandri, Cortese and Davies.

When Davies dropped out with a technical problem, it soon became a two-way fight between van der Mark and Haslam that went the way of the Dutchman.

Sykes was another technical retirement and Laverty a non-starter, leaving just 13 finishers.

With his six wins, Bautista equalled Neil Hodgson’s consecutive win record from 2003 and extended his championship lead over Rea to 26 points – 124 to 98. 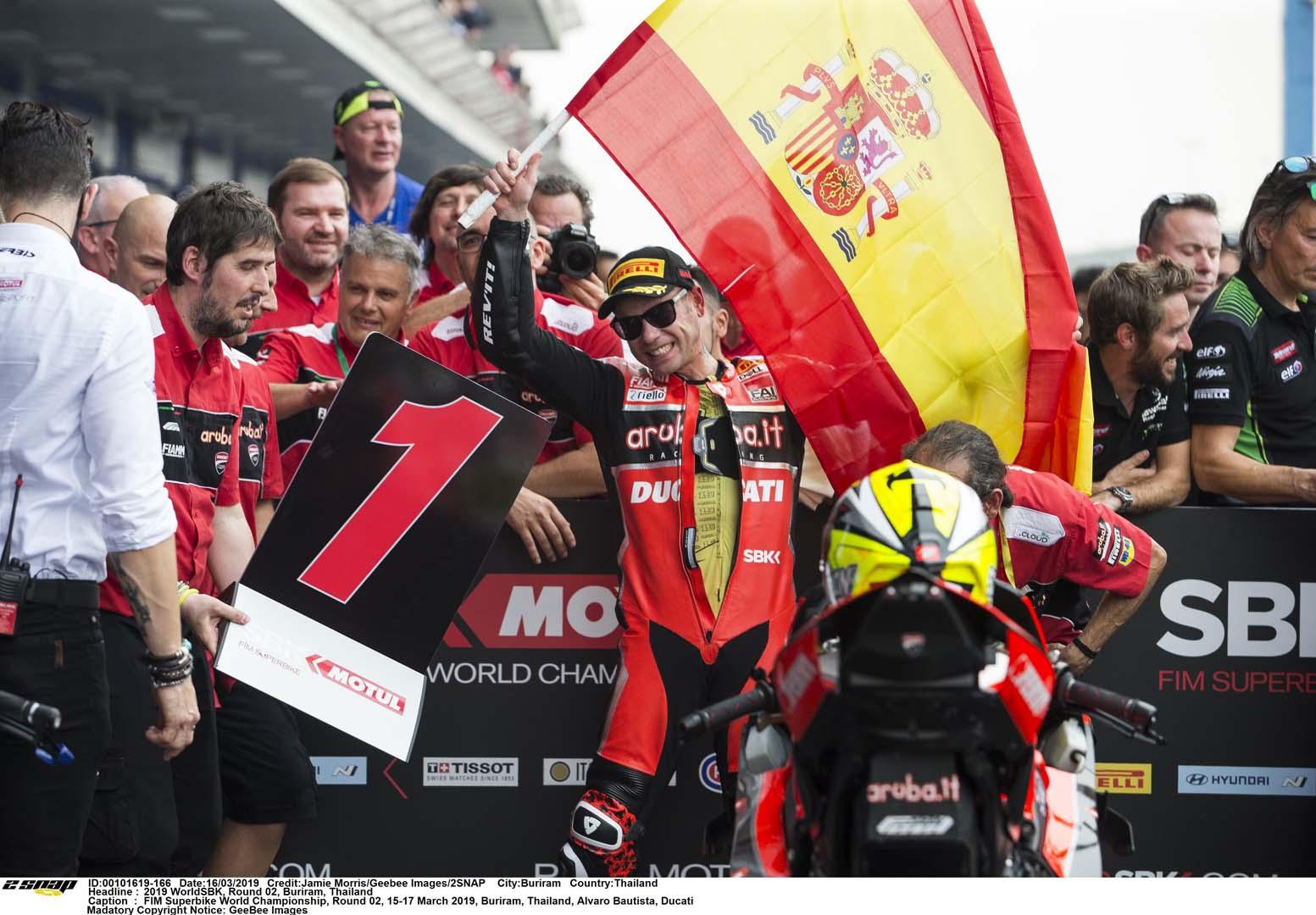 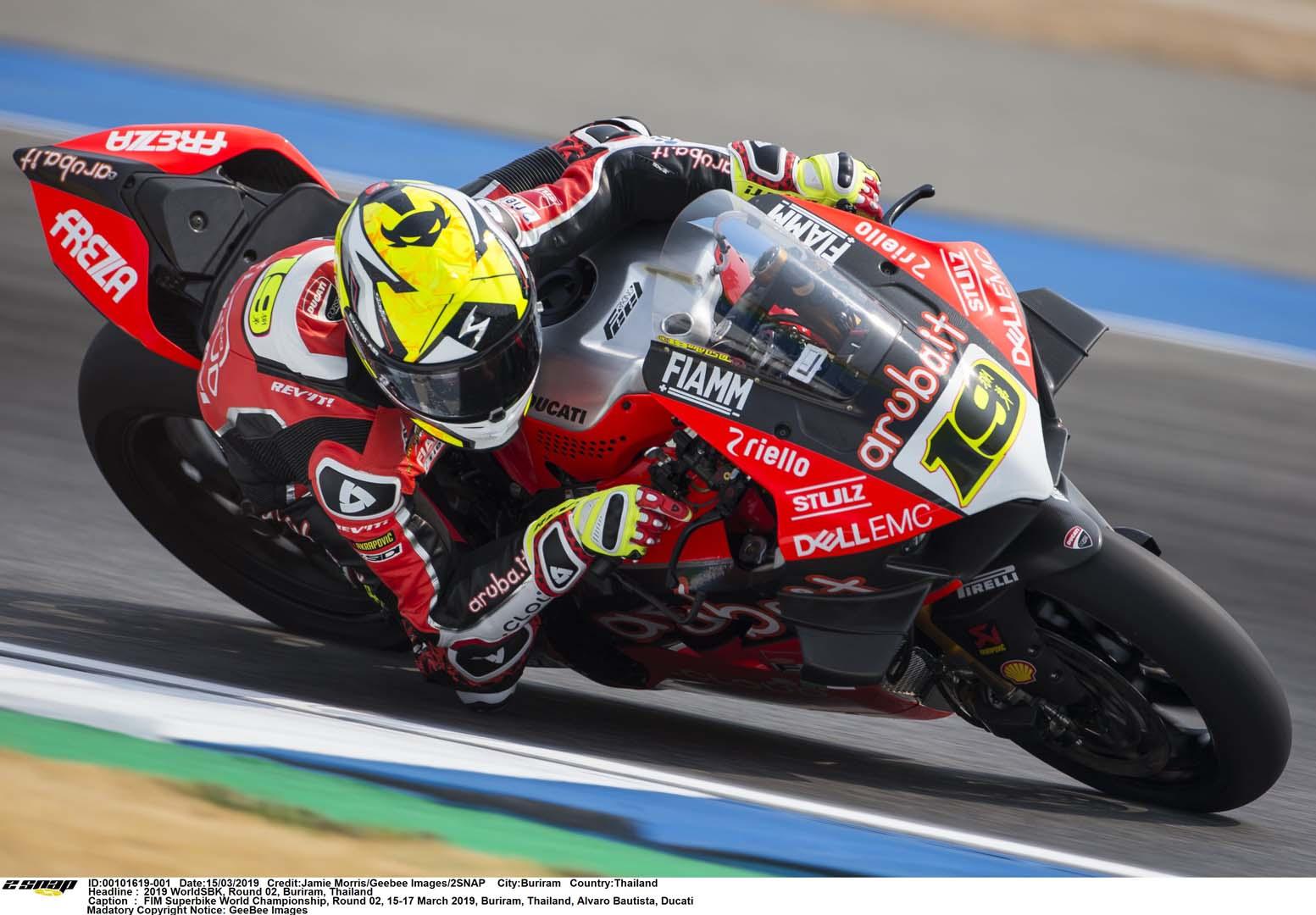 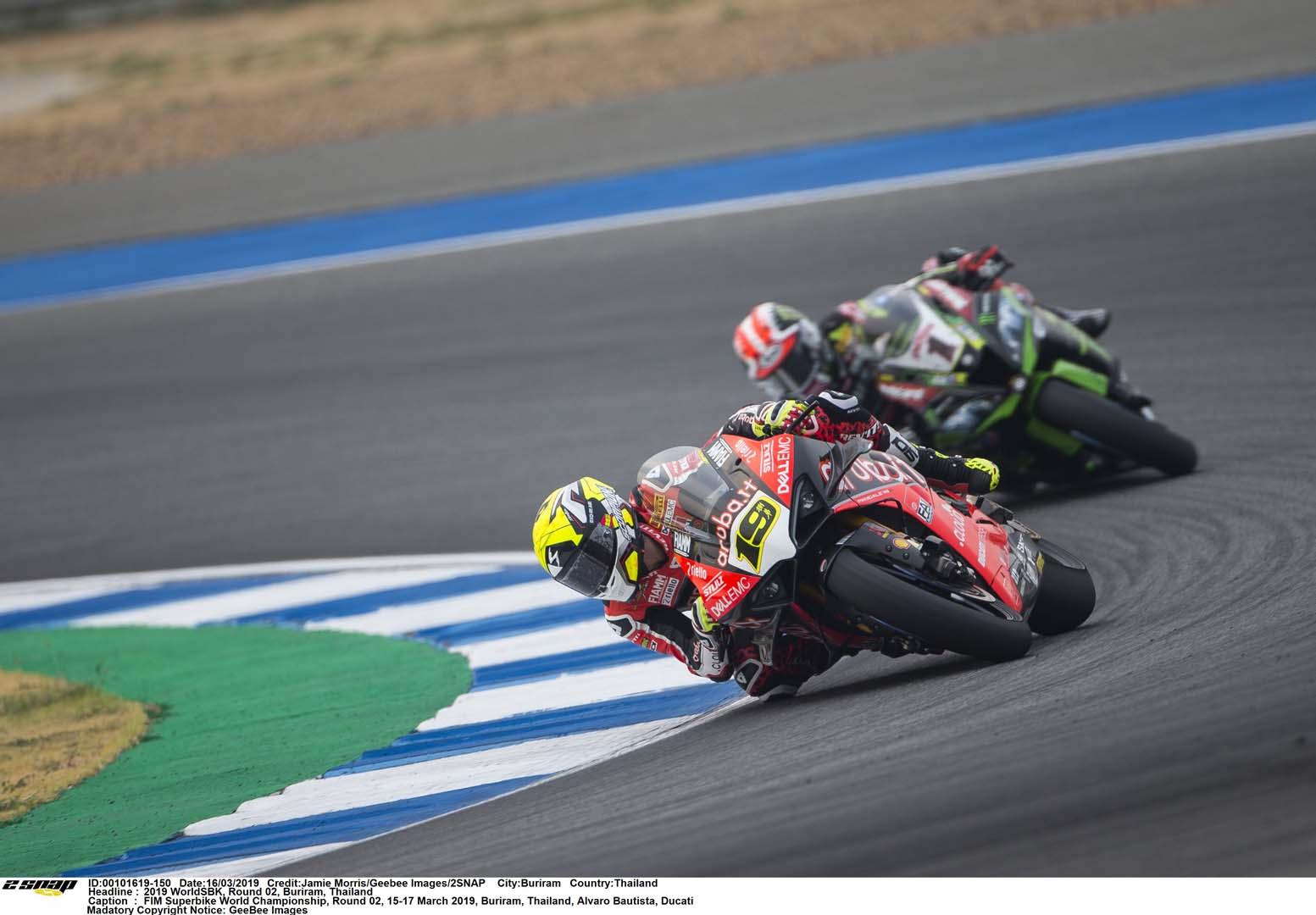 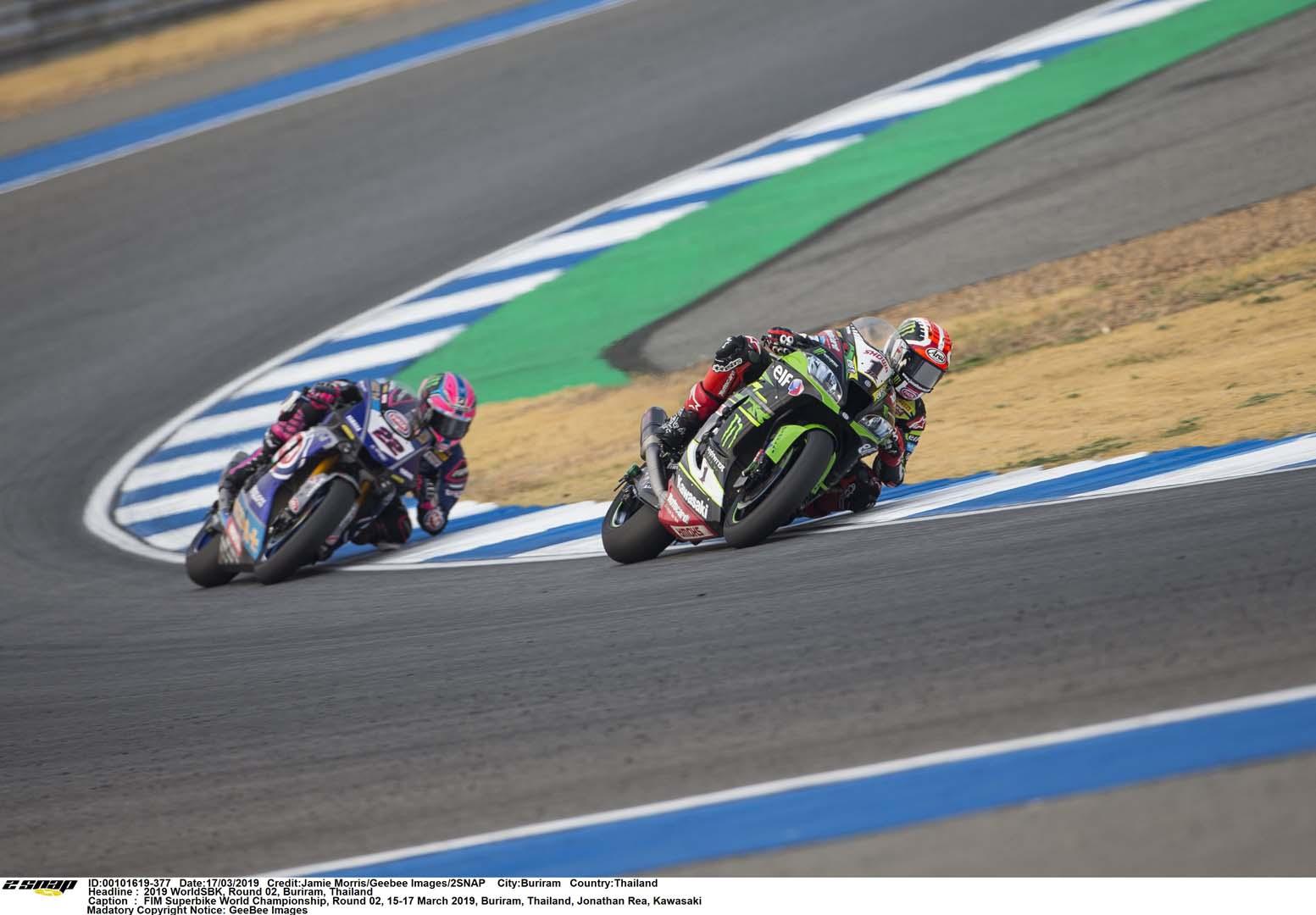 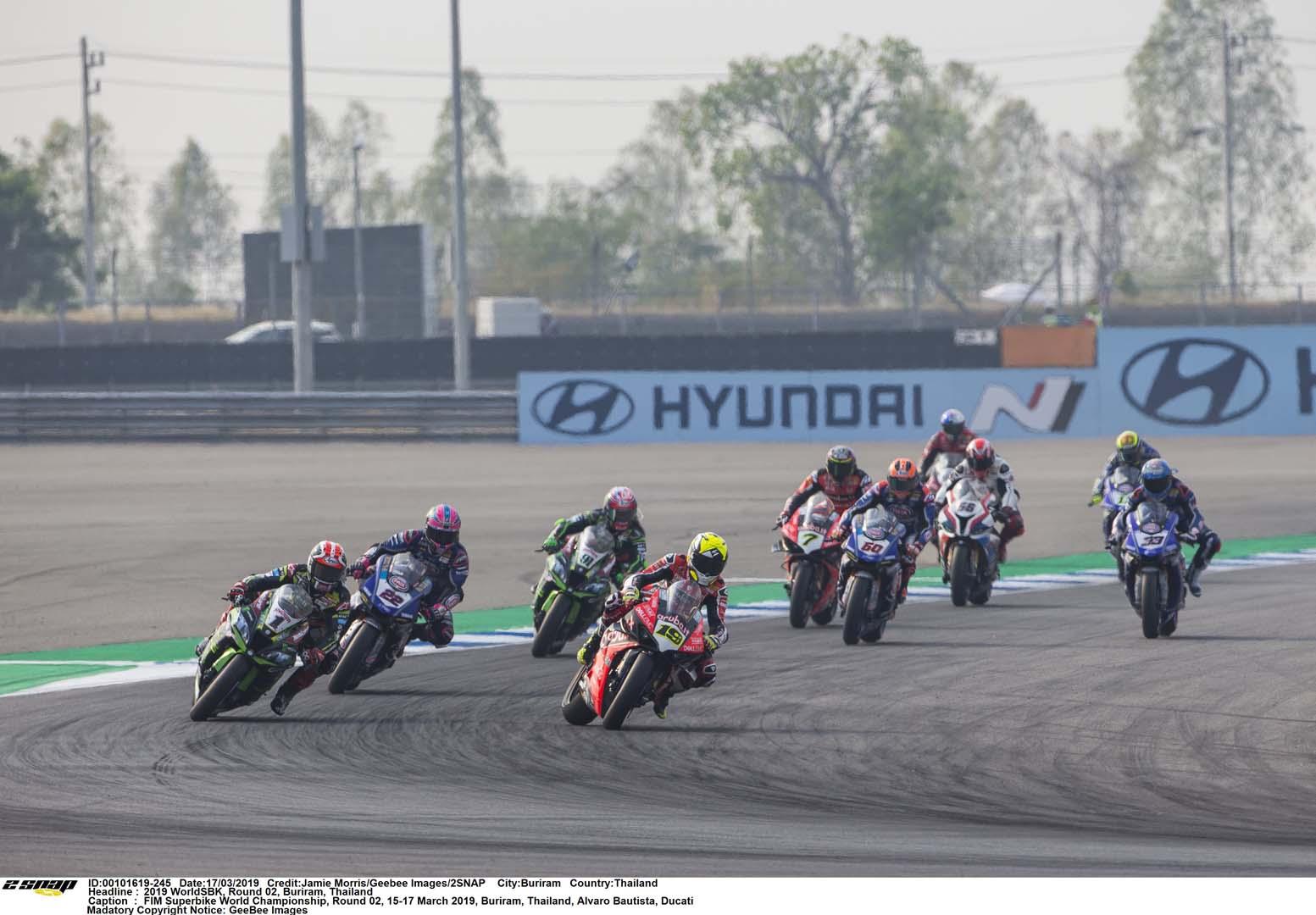 Last year, Aragon was a battle between Rea and Davies, but the Welshman had been struggling to adapt to the Panigale V4 R in 2019; those struggles reflected by poor form in Free Practice and a lowly eighth in Superpole. Bautista took pole with a new circuit lap record of 1m49.049s, while Cortese and Sykes completed the front row after Rea fluffed his Superpole lap to start from tenth.

In cold conditions, Race 1 started with drama when Rea collided with Markus Reiterberger (BMW Motorrad WorldSBK Team) off the line, putting the German out of the race. Delbianco and Lorenzo Mercado (Orelac Racing VerdNatura Kawasaki) also crashed on the opening lap.

At the front of the field, Bautista was on rails, with a lead of almost three seconds within three laps and more than ten seconds by Lap 10. Davies, meanwhile, appeared to have found his mojo and was battling for position with Sykes and Rea behind the dominant Bautista.

As Sykes dropped off, Lowes took his place, challenging Davies and Rea for a podium place for several laps.

Later in the race, Laverty joined the fight, too, but crashed on the final lap after clipping Davies in a passing attempt gone wrong. Davies remained upright to complete the podium – his first of the season - behind Bautista and Rea.

The Tissot Superpole Race saw Bautista get the jump on the field again and Cortese gain an early advantage over Lowes, while Michael Rinaldi (Barni Racing Team Ducati) and van der Mark collided on the opening lap.

Reiterberger retired halfway through, as a battle for the podium once again developed between Lowes, Rea and Davies. Further back, Sykes was duelling with Laverty, while Haslam was holding off Jordi Torres (Team Pedercini Racing Kawasaki).

Another win in the Tissot Superpole Race maintained Bautista’s winning streak that continued in Race 2. This time, though, the win was harder fought – at least compared to past results!

Another cold race and another hot start from Bautista saw him build a lead in Race 2 that even Rea said was embarrassing.

As low as fourth midway through the 18-lap race, Rea recovered to take second from Davies on the final lap and grab a valuable few extra points.

With three rounds down and his winning streak unbroken, Bautista’s championship lead was extended again, now standing at 39 points over Rea - 186 to 147.