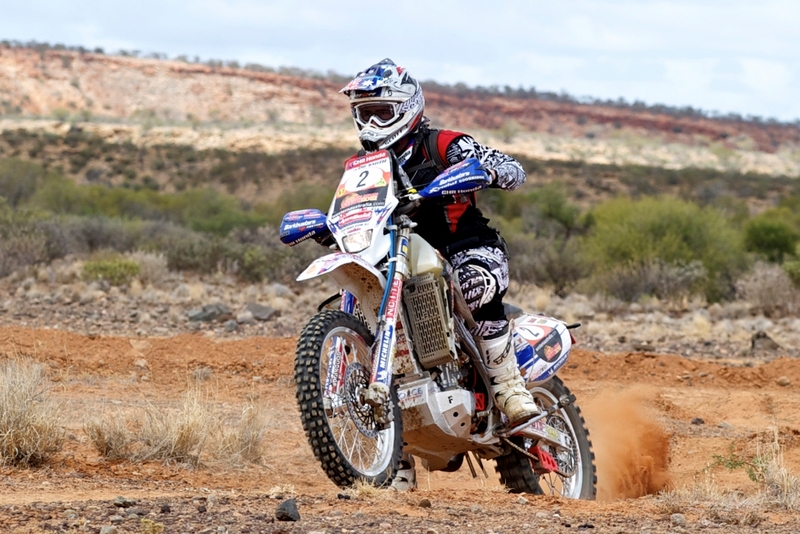 Centred around the vast pastoral station of Bidgemia in WA's Gascoyne region, the leg's 448km course proved to be a nightmare for three of the Dakar Challenge contenders, with one suffering mechanical failure, and two others hospitalised following crashes
Leg 5 of the 2012 Australasian Safari proved to be a tumultuous one for the Dakar Challenge competitors, with three of the front runners dropping out of the race.

Centred around the vast pastoral station of Bidgemia in WA's Gascoyne region, the leg's 448km course proved to be a nightmare for three of the Dakar Challenge contenders, with one suffering mechanical failure, and two others hospitalised following crashes.

For Alex van Ginkel (CPW/AvG Motorsport KTM 4560 EXC), the Dakar Challenge dream is over. After coming off his KTM on the day's second stage, the Dutch rider was airlifted by the medical team to the Safari bivouac, then driven by the medics to Carnarvon Hospital.

American rider Michael Johnson (GHR Honda CRF 450X), another Dakar Challenge contender, broke his arm after coming off his bike on the day's first stage and has been flown by the Royal Flying Doctor Service to Perth for treatment. Both riders are currently in a stable condition.

Vern Strange (Yamaha Desert Racing WRF 450) is out of both the Dakar Challenge and overall podium contention after a mechanical issue saw him fail to complete the day's second stage (Special Stage 12).

The retirements of Strange and Johnson mean Brett Cummings (GHR Honda Rallyerider CRF 450X) is now the runaway leader in the Dakar Challenge. With more than three hours gap to the next Dakar Challenge competitor, the South African is two trouble-free days away from securing a ride in the 2013 Dakar rally.

"I had a good first stage and in the second I got lost for 10 minutes and four bikes passed me, but I eventually caught three of them," Cummings said.

At the head of the field, it was "normal services" for the Moto Division leader, Jake Smith (GHR Honda CRF 450X), who continues to hold his lead over team mate, Warren Strange. Smith won the first stage and retained his 28-minute lead.
"I took it easy and didn't have to push," Jake said. "My only drama was the battery died in the automatic scroll, so I had to scroll it by hand for the last 250km. It was a fun stage, technical, and had everything - washaways, creeks…I enjoyed it."

Second on Leg 5 was Rod Faggotter (Yamaha Desert Racing WR 450F), who won the day's second stage and finished the leg only five minutes behind Smith. The Queenslander is carrying a time penalty from failure to complete Leg 4 in the allocated time, and sits in 19th overall.

"I really enjoyed it. I liked the stages, there was a bit of everything," Faggotter said. "The tracks were open and flowing, it was tricky to navigate so I had to be on my game. The bike is going great. I came across a lot of cattle and had to ride around and through herds - it was just like mustering back home!"

GHR Honda's Todd Smith was also quick on Leg 5, finishing in fourth, but like Faggotter, carries a time penalty from an earlier DNF and is at the tail end of the field.

Vern Strange's mechanical failure brings privateer Ivan Erceg (Honda CRF 450X) to third overall. Behind him, Ryan Ingram (CPW Motoparts KTM 450), who sits fourth overall, found the hard and rocky terrain made for a long day.
"It got better as the day went on," Ingram said. "You know yesterday how Don (My manager) said I had to ride the bike like I stole it? Well now it's looking like it's been stolen!," Ingram laughed.

David Schwarz (Husaberg Rallye Racing FE 570) continues his climb through the field and now sits in eighth overall. The experienced Safari and Dakar campaigner said he had a great day and was happy with his bike that hadn't missed a beat.

Melchoir van Heertum (KTM 530 EXC) said the first stage (Special Stage 11) was the best ever in the Safari so far. "There was nice scenery, it was good to navigate, the tracks were nice and it was also technical - quite difficult to ride - I like this style of riding."

With two days of racing remaining, it looks like Jake Smith will take out his second Aus Safari win, but given the mechanical dramas and retirements that have occurred so far, victory is by no means assured!

While the Moto Division was beset with dramas, the Quad Division saw no major changes. Paul Smith (GHR Honda TRX 700XX) is still comfortably ahead of the rest of the four-wheel field, despite finishing second on Leg 5 behind Heath Young (KTM 690 Rallye). Privateer Jason Lucas (Honda TRX 700XX) was listed as a non-finisher, and will incur a time penalty if he restarts for leg 6.

"50km into the last stage today I lost my front brakes, so I had to ride 250km with no brakes!" Smith said. "I had a few sketchy moments, there were close calls with gutters and I couldn't pull the quad up fast enough - I was having memories of last year when I broke my leg. Otherwise the stages were awesome and technical."

The penultimate leg of the Australasian Safari kicks off at Jimba Jimba Station, then moves on to Winderie Station, Wooramel River and Hamelin on the coast between Carnarvon and Kalbarri. From there, the day's route will take competitors south to the Murchison River before finishing in Kalbarri. The 431 kms of competitive stages includes red dunes, fences, saltbush flats, river crossings and typical rough outback station roads.

For more information on the 2012 Australasian Safari and the latest results, visit www.australasiansafari.com.au. 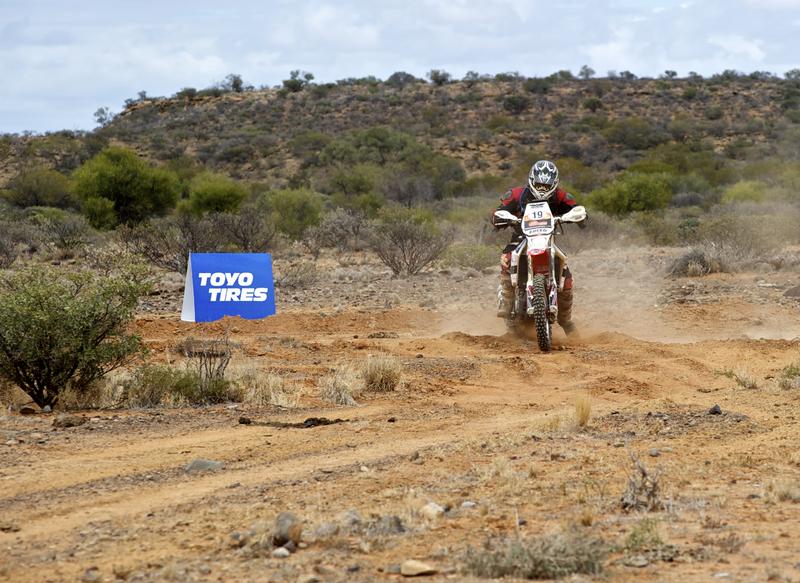 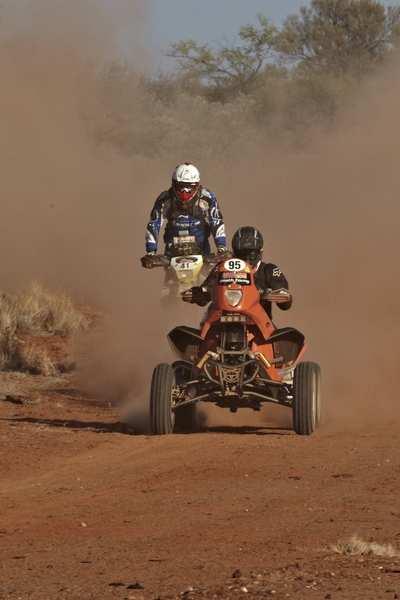 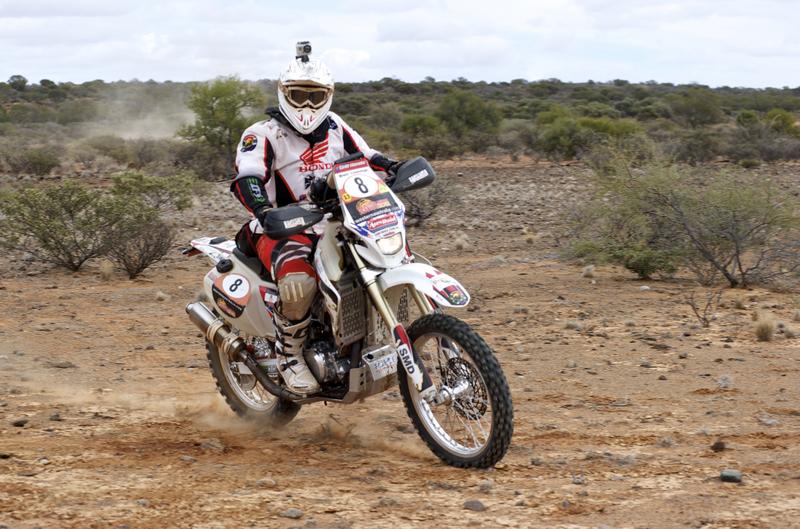 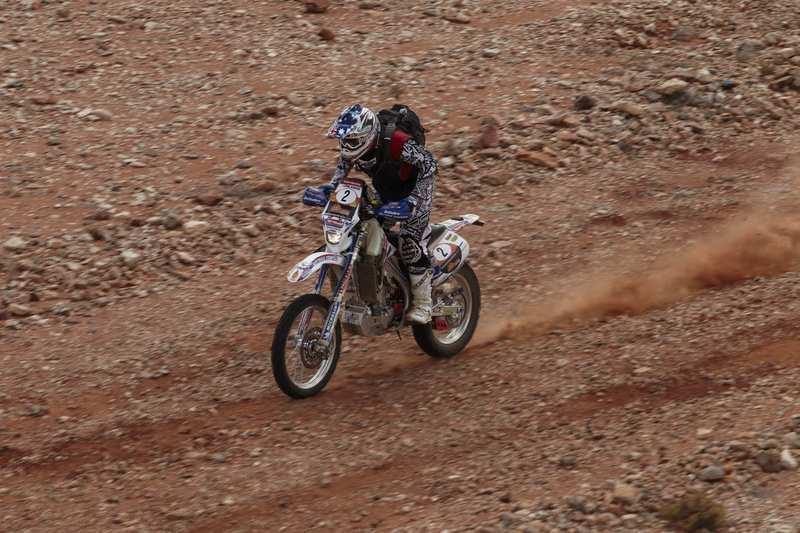 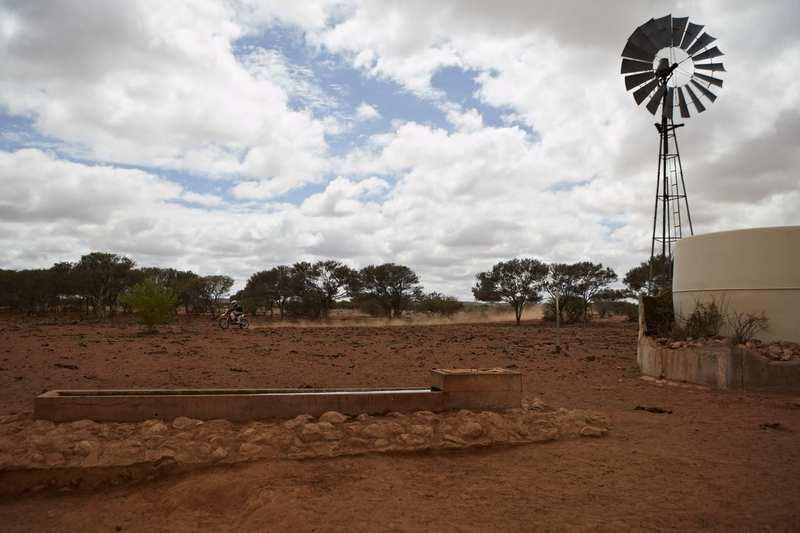