Sunshine Special. Made in Queensland and made for Queensland, this combination of hot rod and Harley is something else! 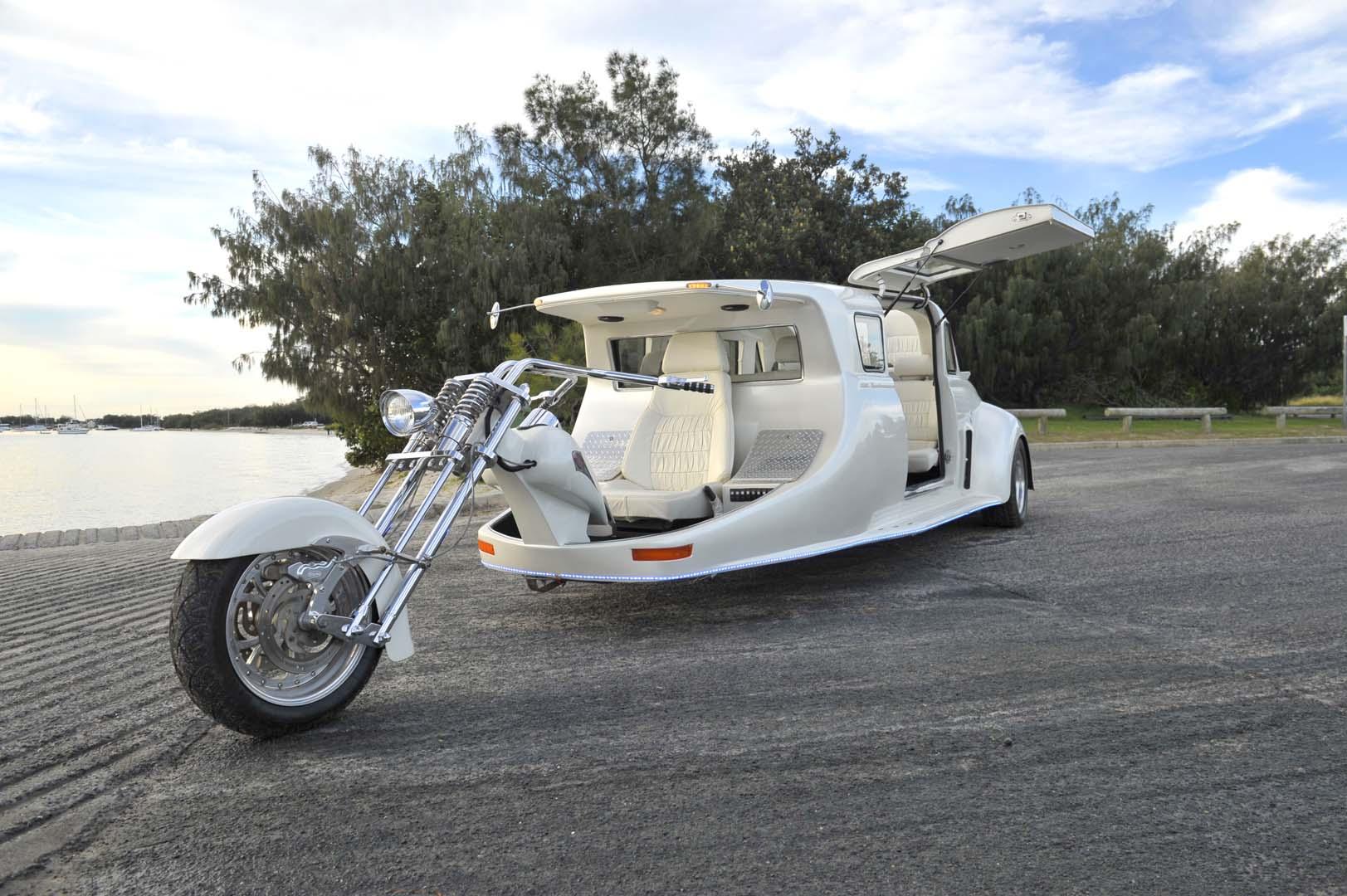 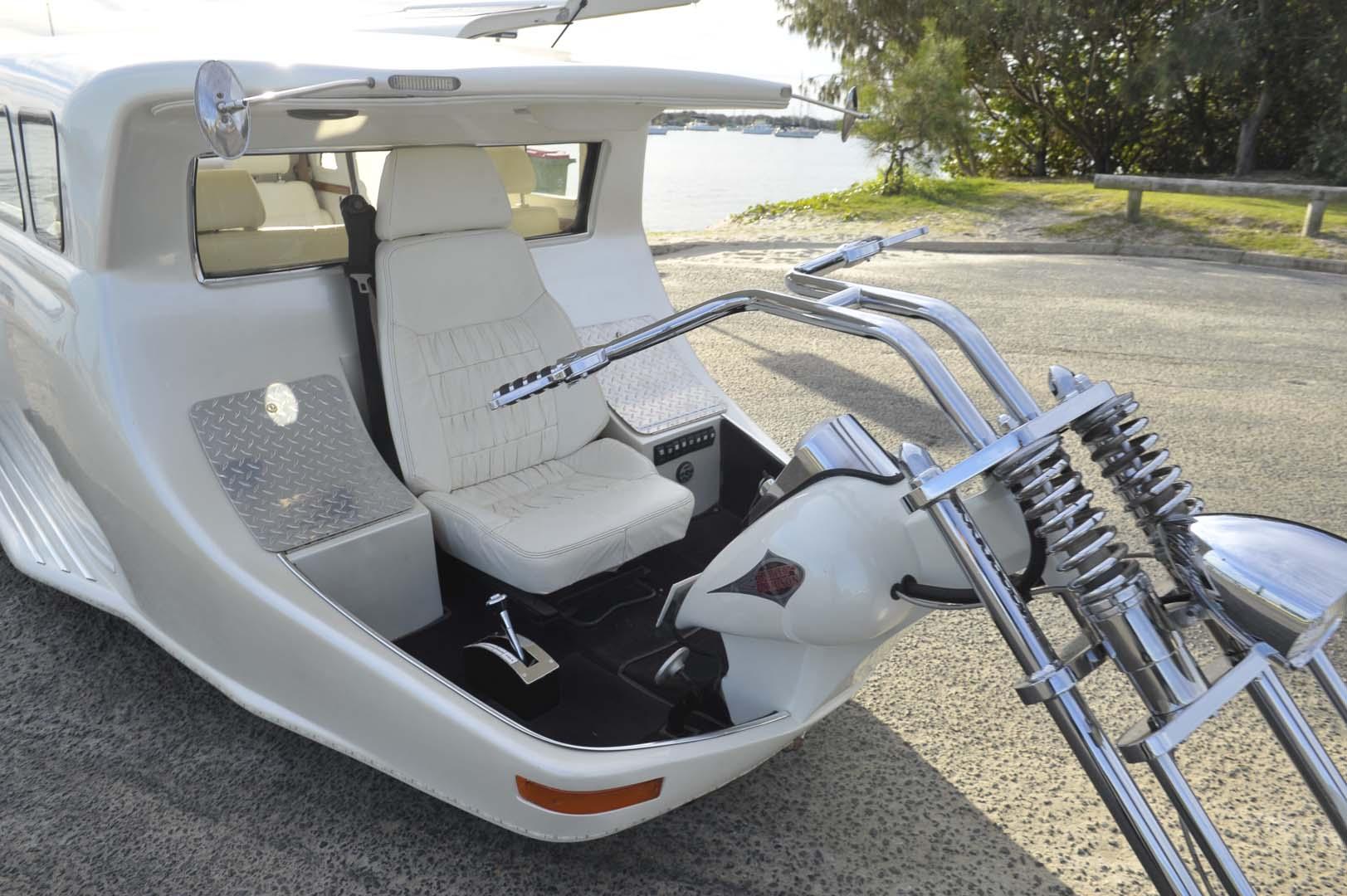 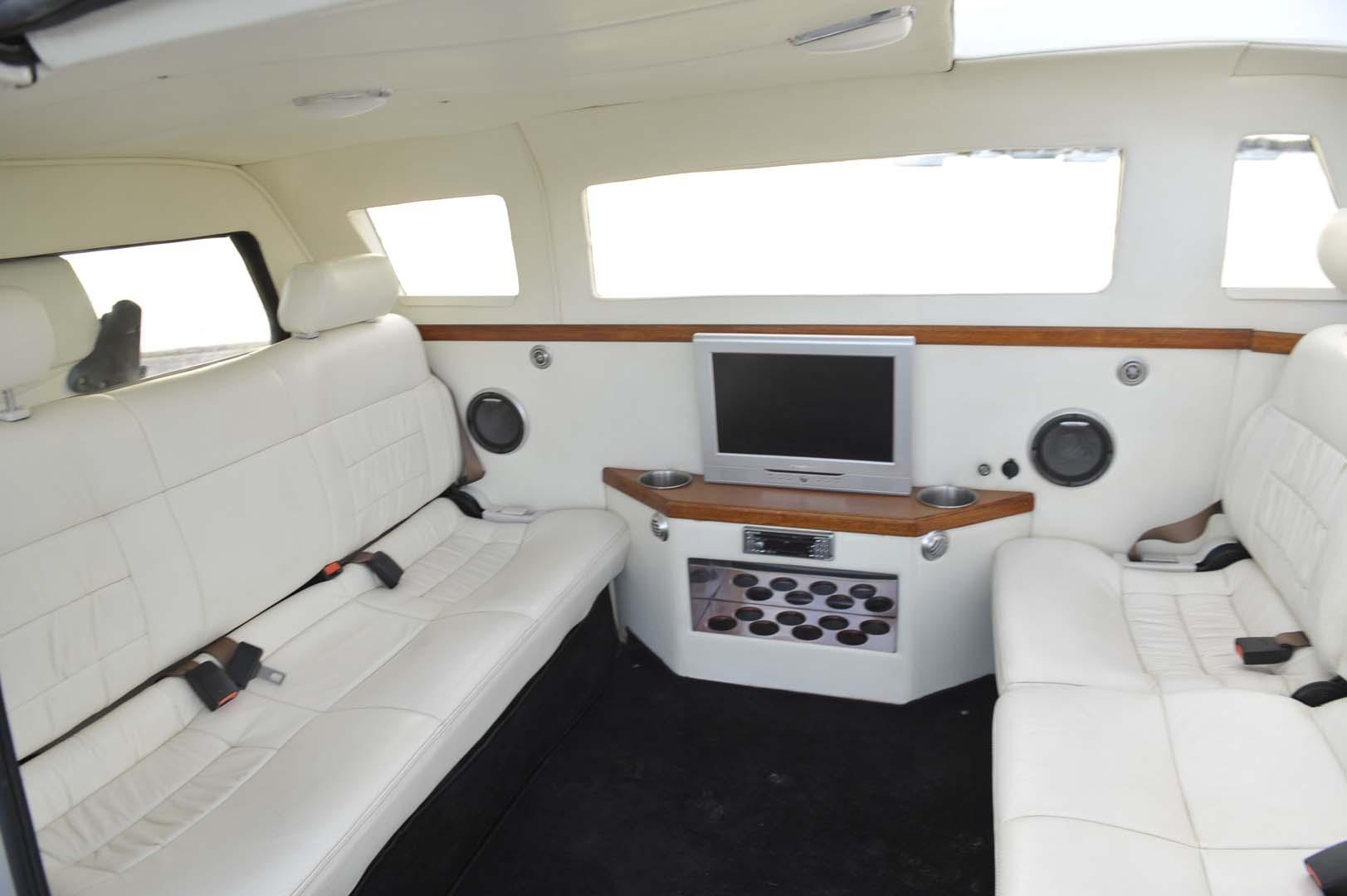 They say the journey is just as important as the destination. They don’t say anything about the impression you can make on that journey, though. In the case of the trike presented here, not only would a ride in it make for one hell of a pleasurable journey, it’d look sensational doing it.

Combining automobile back ends with motorcycle front ends is nothing new. In fact, there’s been all sorts of combinations rolled out over the years, with everything from a VW Beetle to a Ford Mustang forming the back end. JUST BIKES can remember a trike that was in circulation here a few years ago using the back end of an FB/EK Holden and a quick internet search will turn up some equally nutty creations. There have even been a few trikes that combine old-school chopper front ends with hot rod rears, too.

The machine presented here, though, is on a whole new level - not just for its sheer size, but for how well it works together. Taste is subjective, of course, but this machine has certainly been executed better than most. 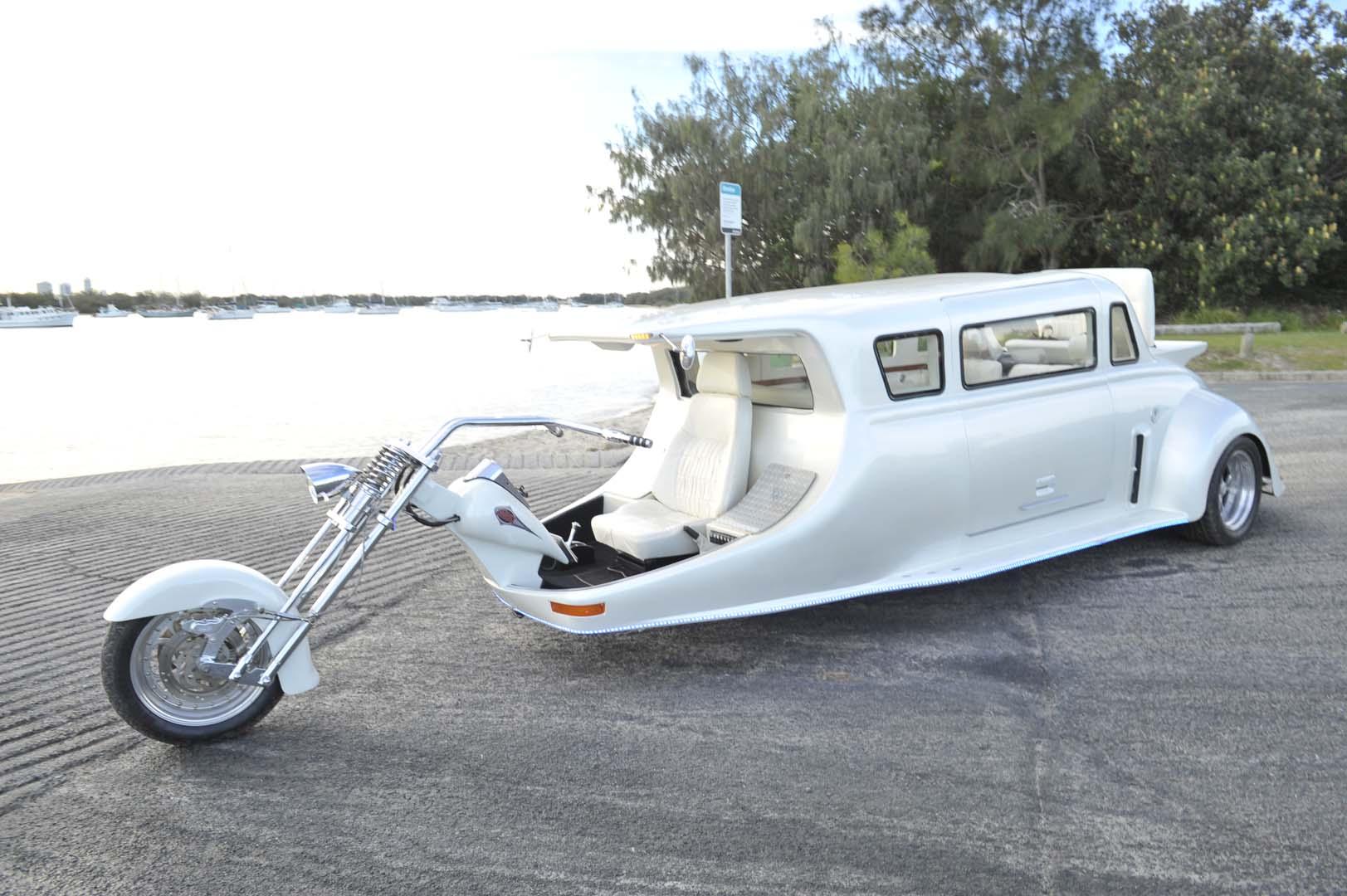 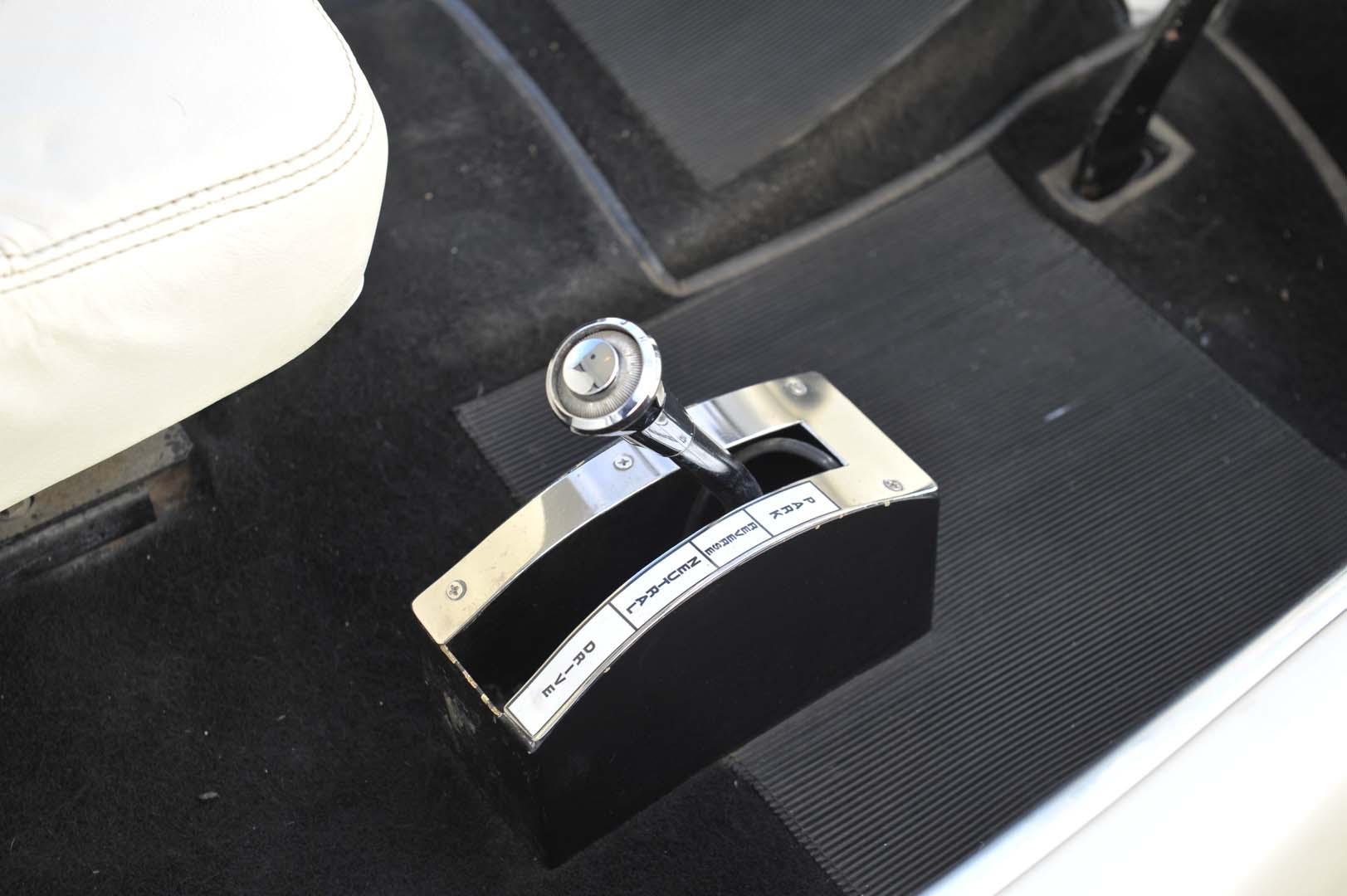 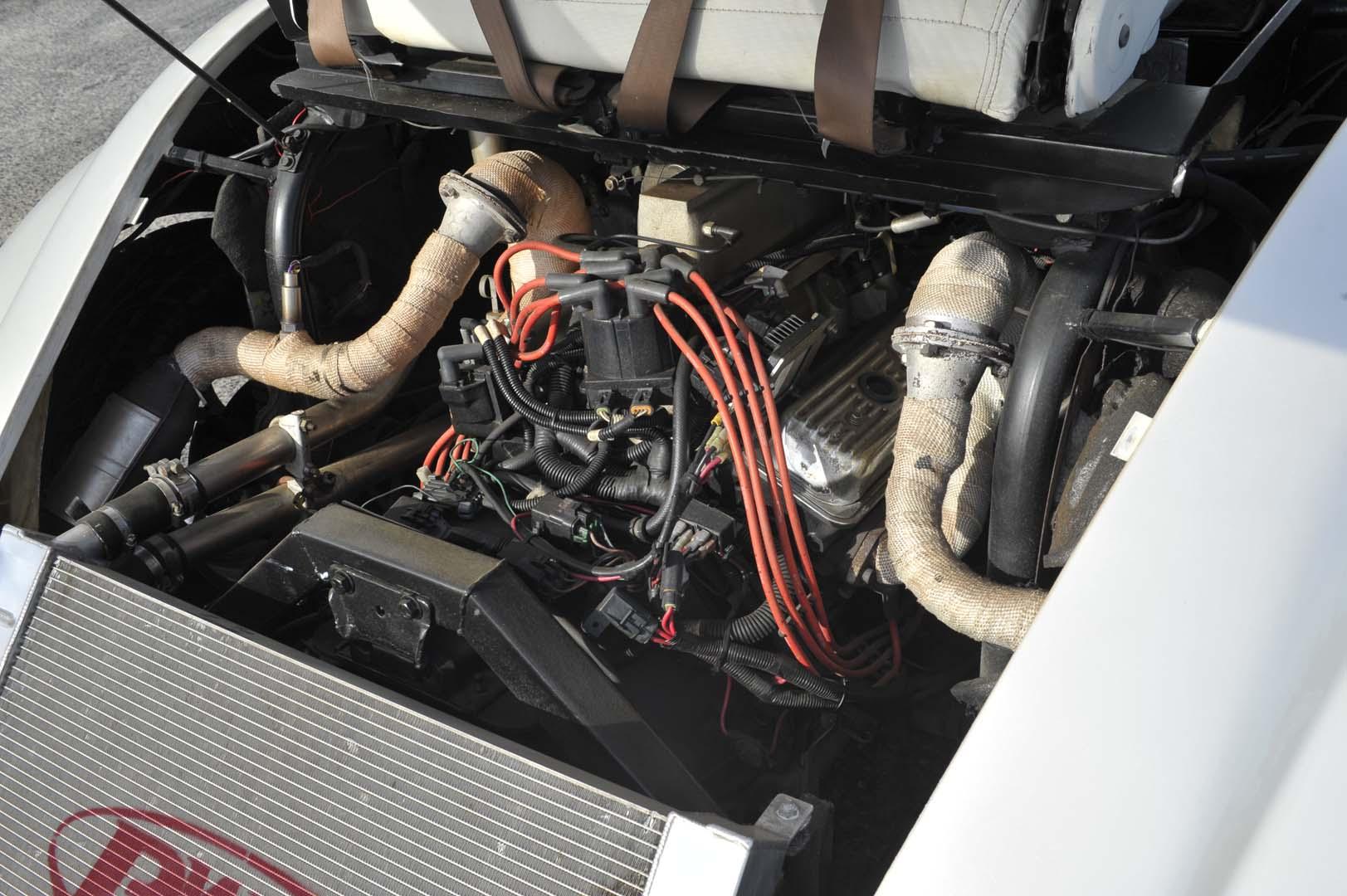 The formal hire car and tour game is a tough one, especially in holiday hot spots where plenty of businesses are fighting hard for the tourist dollar. Mac Swift understands the nature of the game better than most, having established Wildfire Tours on the Gold Coast back in 2007.

Wildfire Tours started with Harley-Davidson pillion rides along the Gold Coast beachfront and through the surrounding hinterland – covering everything from a 1-hour trip to a 10-day tour.

Harleys don’t suit every occasion or every customer, so a fleet of stretch limousines, classic cars and hot rods were added to the business soon after.

Of course, cars are more practical for weddings and other formal hire work, but if a vehicle could be built that combined the passenger comfort of a limousine with the cool looks of a motorcycle and hot rod, that could be a winner, right?

That was Mac’s thinking, and one of his mates, Chris, was on the same page. Fortunately for Mac, Chris was also a skilled fibreglass fabricator who had started creating the mould for a hot rod-inspired fibreglass trike body back in the late 1990s.

Mac saw potential in the project and bought the moulds after one unit had been built. That first ‘limo trike’ went over to Broome in WA, doing pretty much the same thing as Wildfire Tours, and is still in operation today. 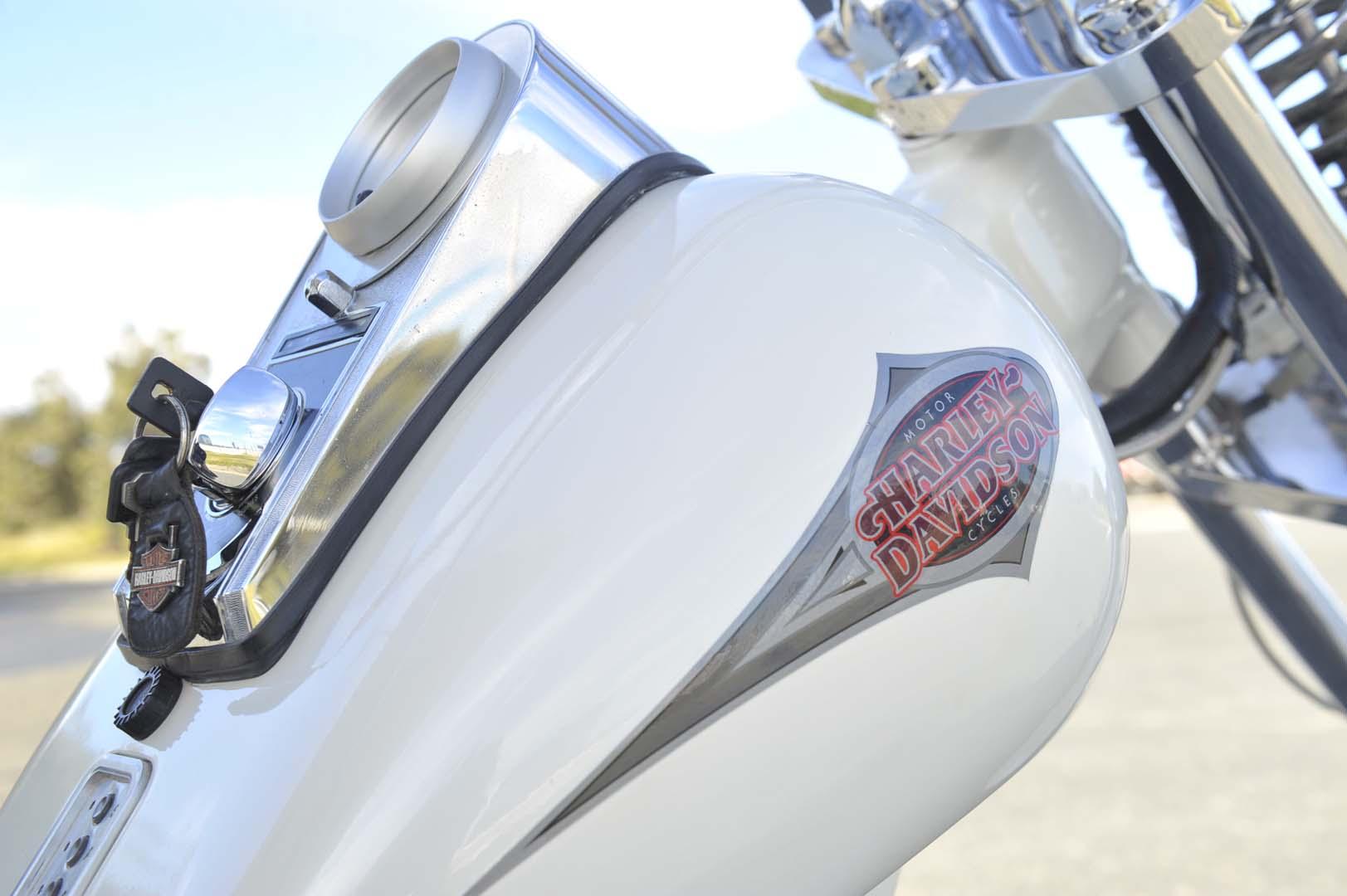 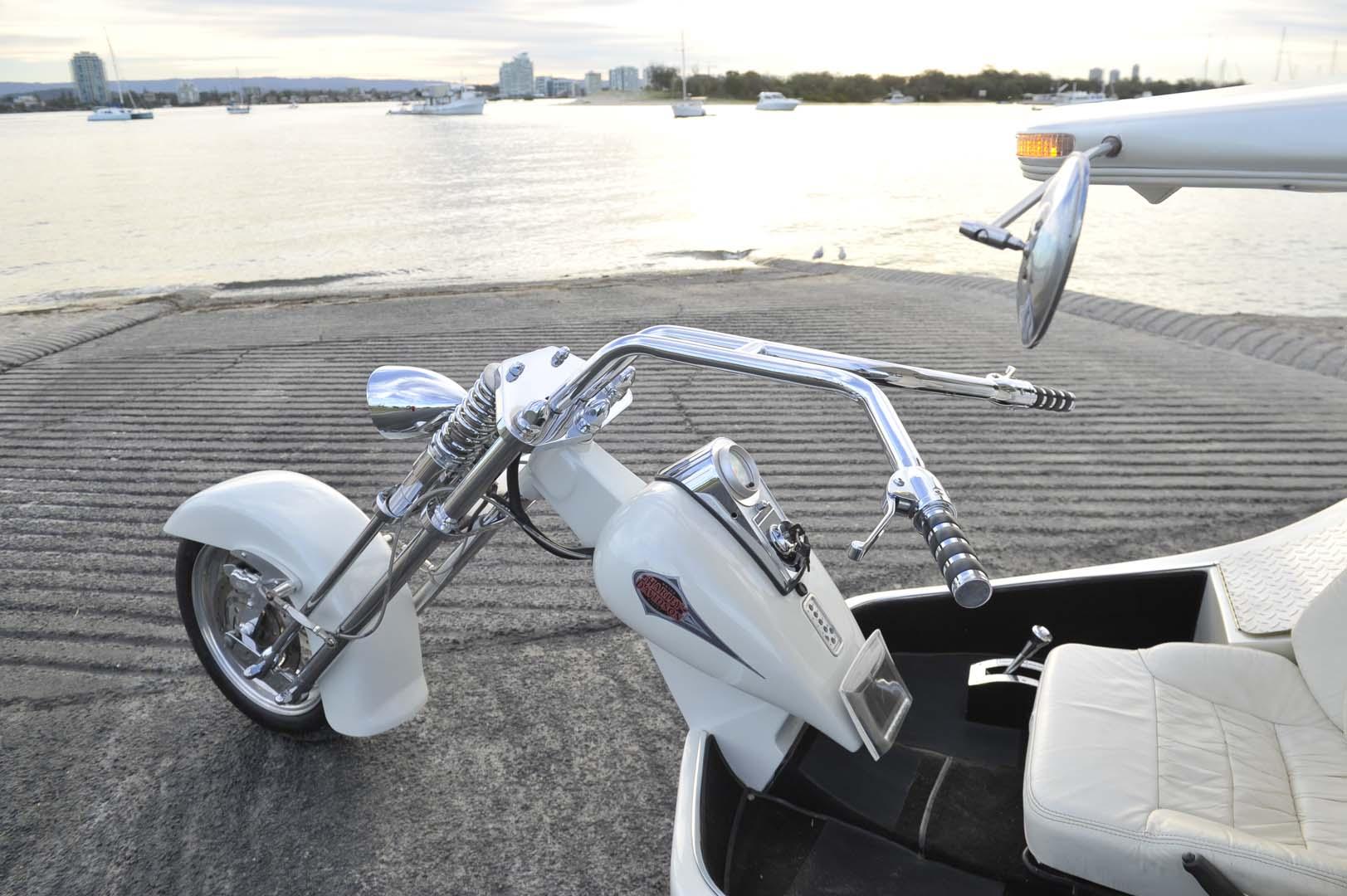 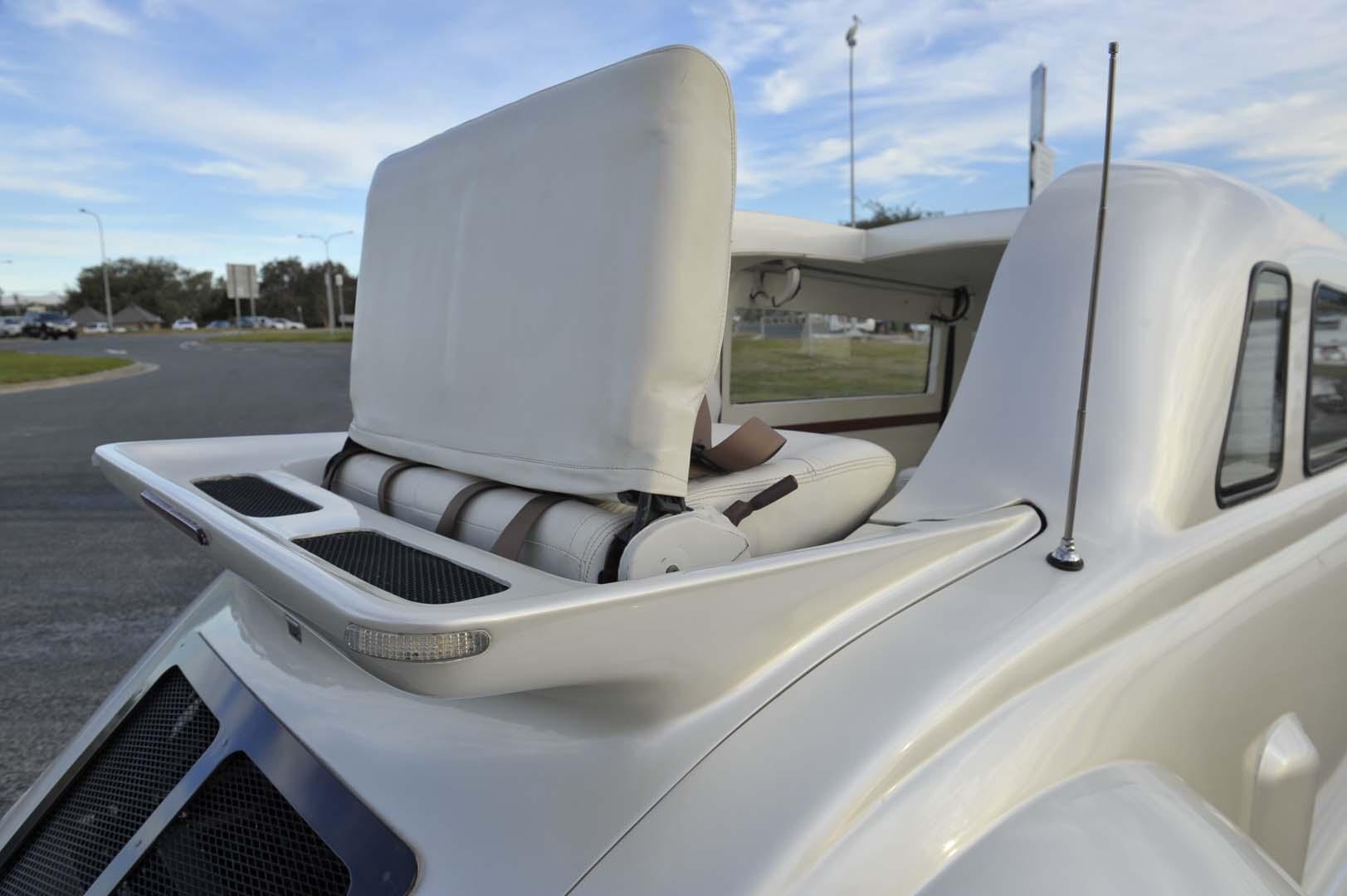 While that first trike was fine enough, Mac had some concerns with it, including heavy steering, electrical issues and a lack of power from the Commodore-type V6 engine.

For his trike, Mac aimed to make it better.

The mould for the body took eight years to produce and the shape was very appealing to Mac, so instead of changing the body, he called on some skilled friends to, essentially, build the rest of the trike to suit the body.

Starting point was an all-new, stronger chassis, with additional steel in the flanks that serve as anti-side-intrusion bars.

The original trike had a conventional Harley telescopic fork front end, which made handling vague and confident steering next to impossible. A larger and stronger front end was needed, with the requisite rake and looks to suit.

A retro-style springer fork was sourced from American Suspension, and while it’s not dissimilar to what you’d see on an Oz Trike, this one was extensively modified by Hoppy, another mate of Mac’s. The handlebars are from Burleigh Bars and these were also made specifically to suit the trike. (Interestingly, the WA-based limo trike has since upgraded to a similar front end).

Next to be addressed was the drivetrain.

With the weight of the chassis, body and occupants – up to nine of them, including the driver – a V6 wasn’t going to cut it in Mac’s opinion, so a GM Performance crate engine – a Ram Jet 350 small-block V8 - was selected. Compact, but powerful (in the ballpark of 257kW / 450Nm in this application), this engine could achieve highway speeds and beyond without breaking a sweat. But as this trike would be doing most of its work as a low-speed cruiser, an oversized, fan-assisted PWR radiator was fitted to ensure overheating wouldn’t be an issue.

The need for the running gear to be compact required a left-field approach to the transmission and this came in the form of a GM Turbo-Hydramatic 425 4-speed transaxle. 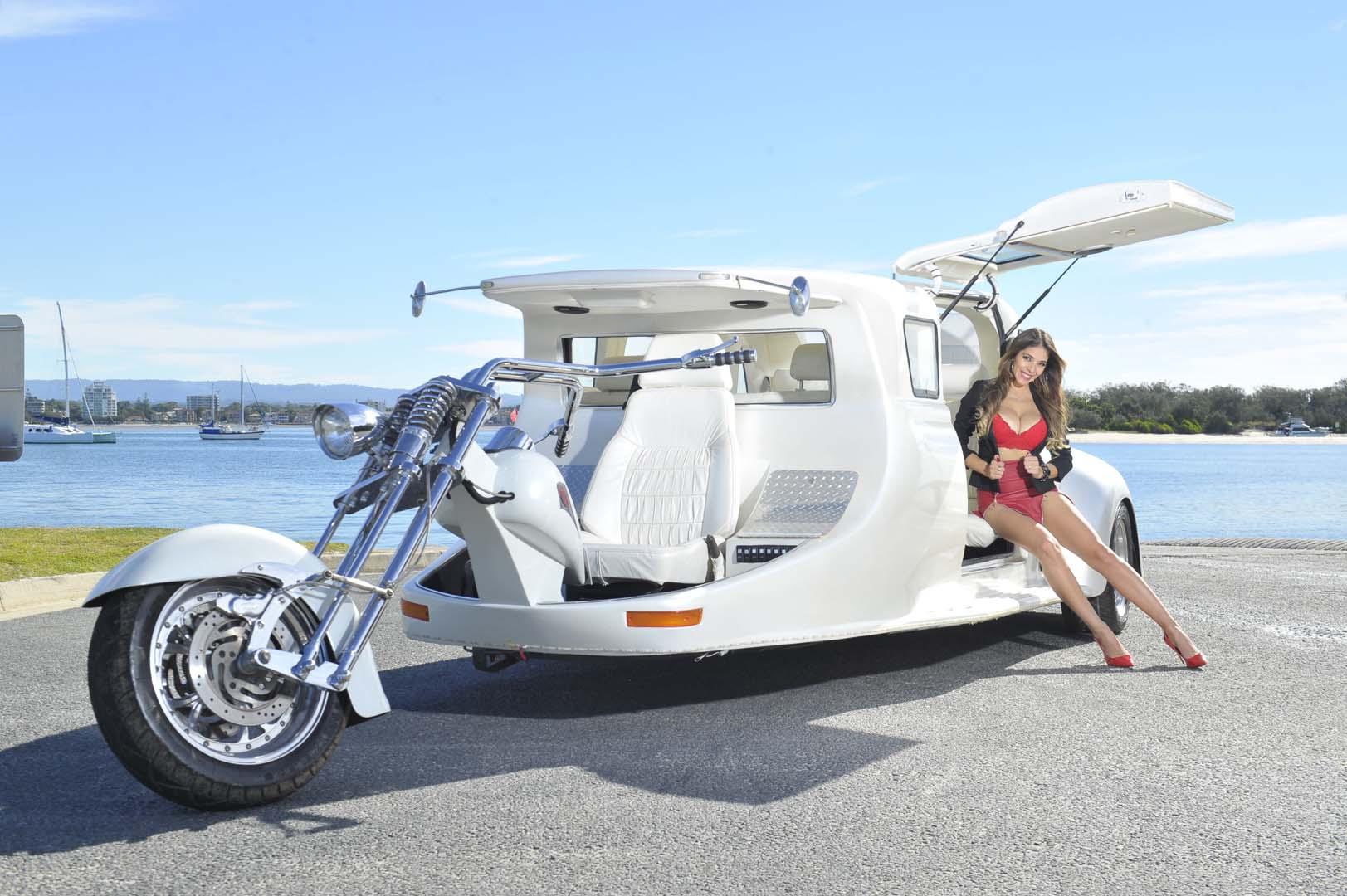 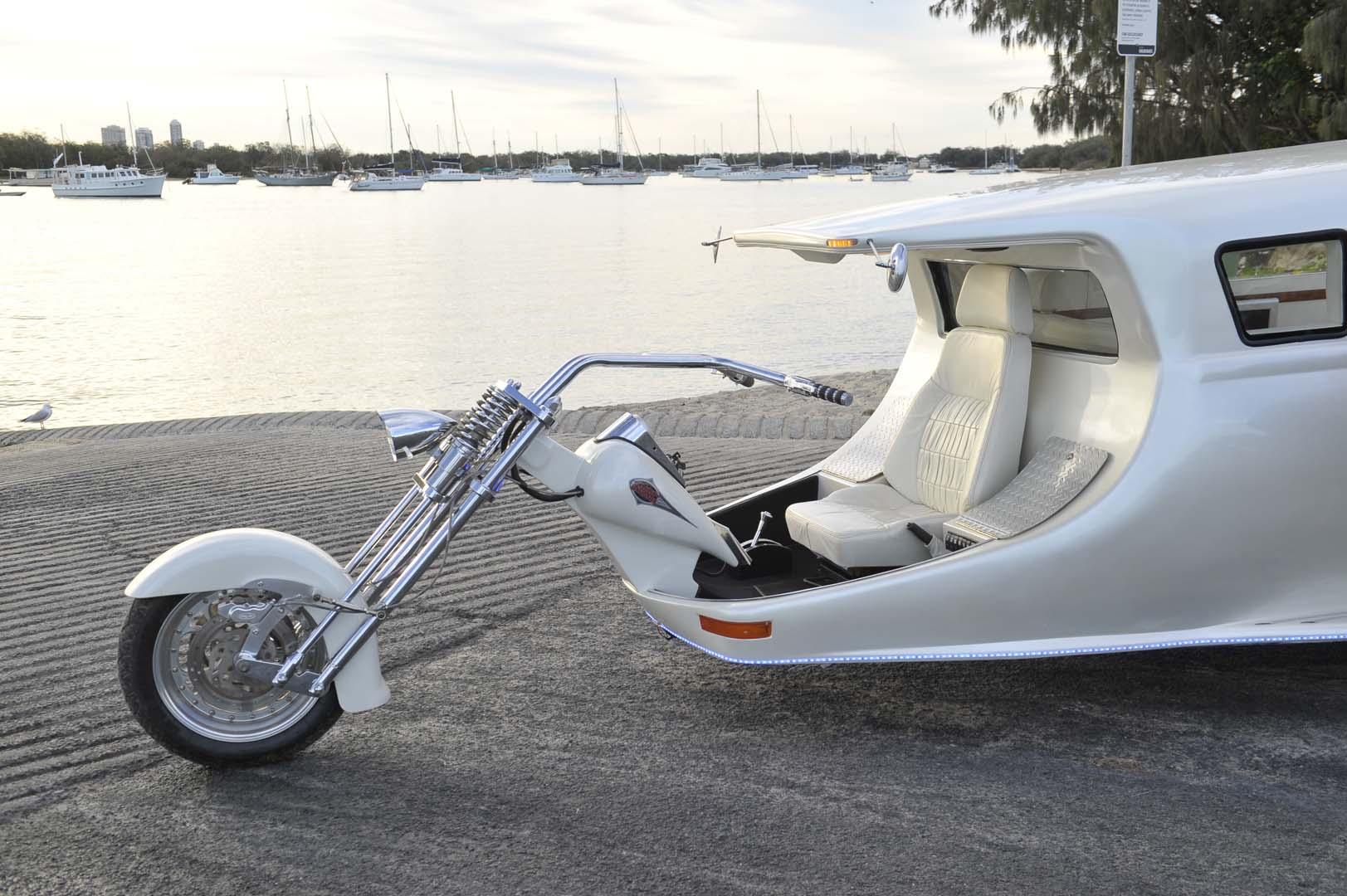 Originally fitted to a front-wheel drive Cadillac Eldorado from the ‘70s, the TH425 proved to be perfect for this application – essentially taking the FWD Cadillac layout and moving it to the rear.

The transaxle’s suspension layout was retained, too, but upgraded with Koni coilover shocks and adjustable airbags, while the fuel tank sits just ahead of this, under the rear passenger seat (the motorcycle fuel tank is purely for show).

A dual battery set-up also sits under the rear seats, which is necessary for the internal and external lighting, sound system, TV, electric partition window and other features in the passenger area.

Motorcycle-style controls were retained, with standard right-hand throttle operation and front-wheel braking through the levers, while a floor-mounted pedal was fitted for the rear brakes.

On the brakes, ventilated discs out of a late-model Ford Falcon were chosen for the rear end, while a Dragway twin-disc set-up with complementary calipers was added to the front.

A shifter for the 4-speed auto was sourced from a Dodge Dart and placed to the driver’s right, while removable panels on each side of the driver’s seat allow access to the brake master cylinders and fuses.

A standard speedo was fitted to the Harley-branded fuel tank, while gauges for oil pressure, engine temp and fuel were placed on the hood above the driver. A more recent addition was a screen for a rear-view camera, placed in a waterproof pocket at the lower edge of the fuel tank. 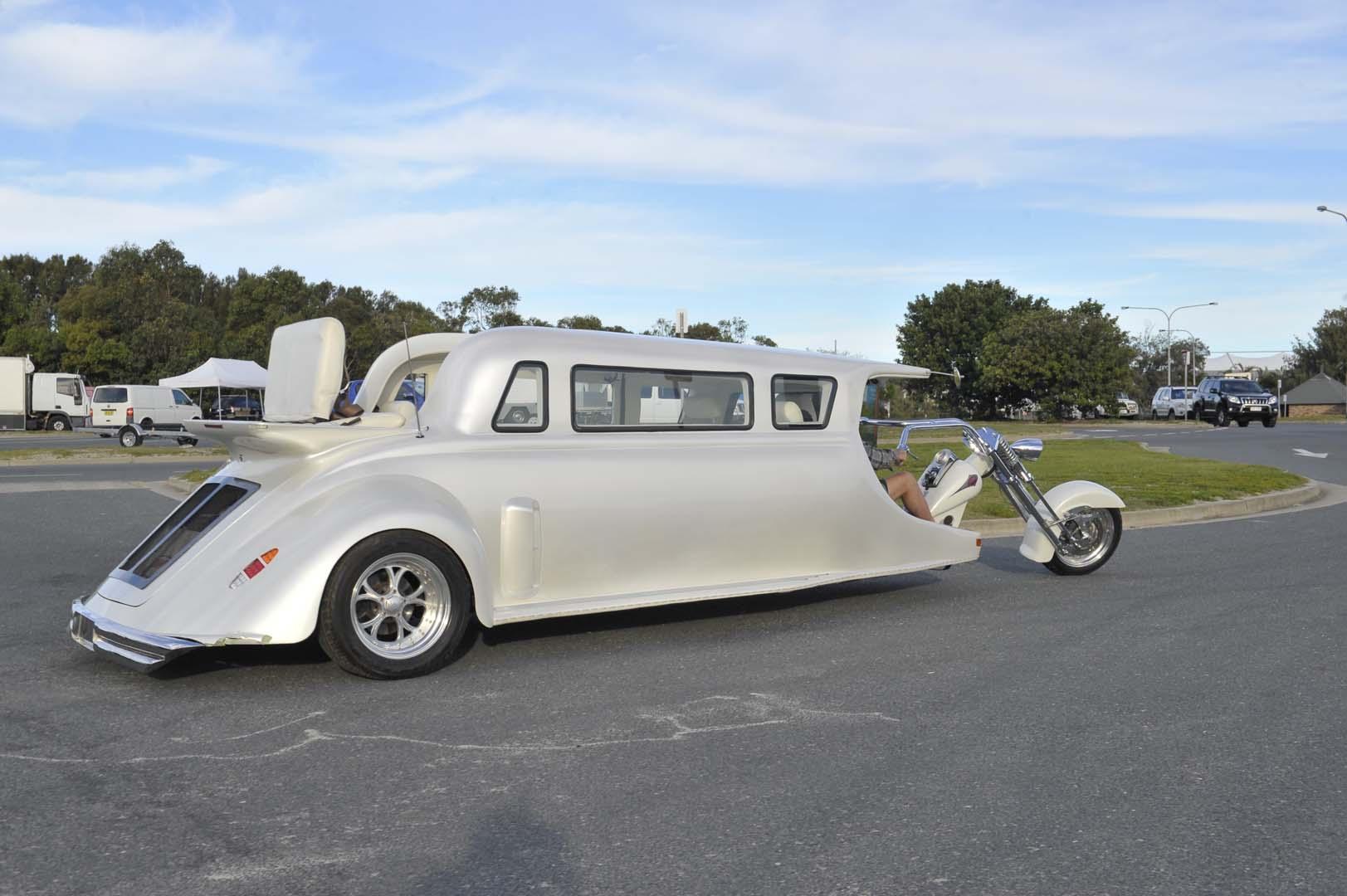 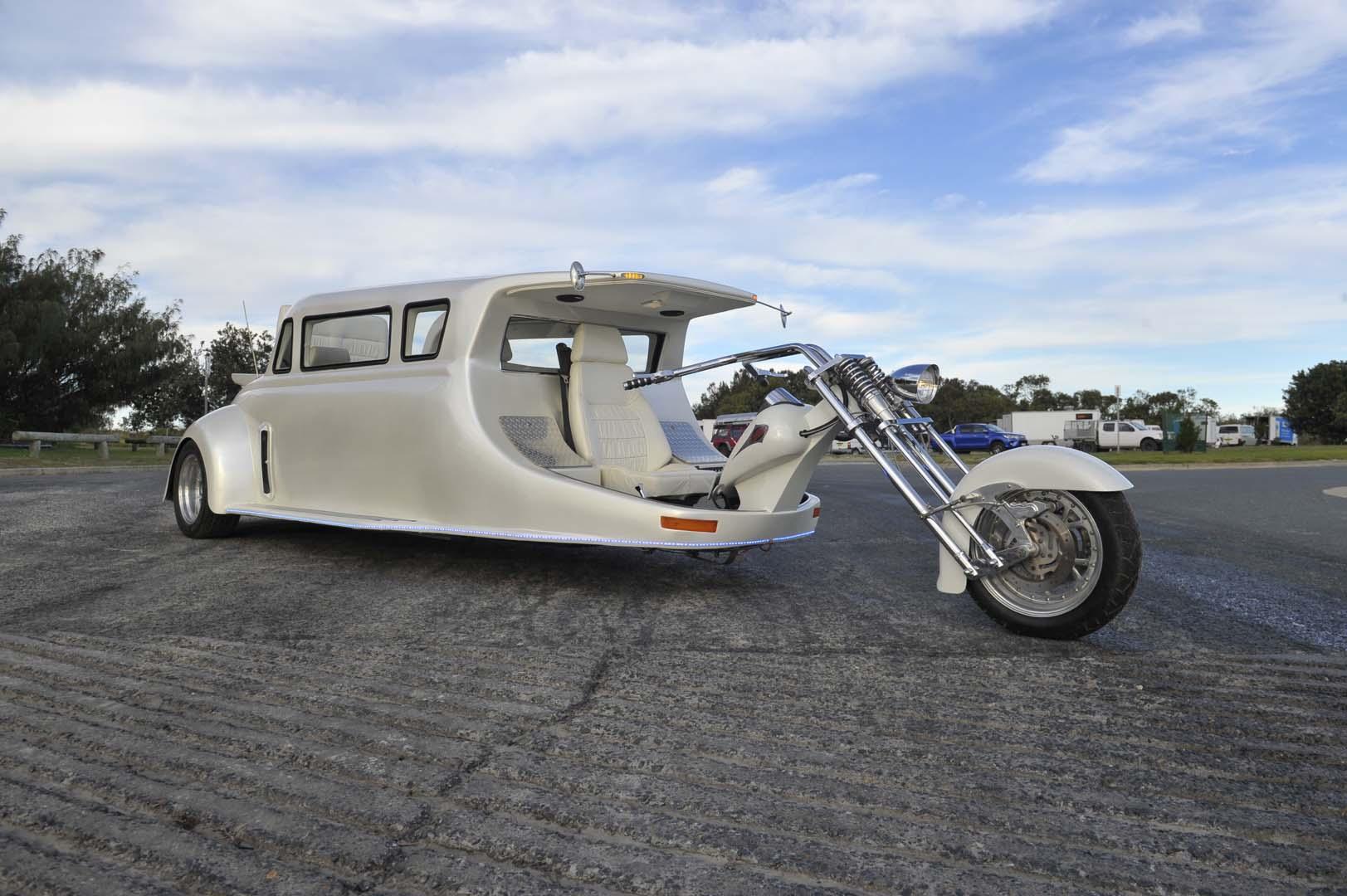 As clever as the mechanical layout of the trike was, it’s the body that draws the most attention and what drew Mac to it in the first place.

The back end was moulded in the style of ’30s-era Fords, but is more “inspired by” than “imitating” this body shape.

The flanks are obviously much longer (all up, the trike is 7 metres long) and feature integral running boards, while the open driver’s area in reminiscent of a Model T Ford ‘C-Cab’

Passenger entry is via a large gullwing-style side door, with face-to-face, custom-made seating inside, all trimmed in leather.

A Jarrah timber cabinet opposite the door holds a TV, Clarion sound system, MP3 and DVD player, with provision for ice buckets and bottles, too.

The real party piece of this build, though, is the high-mount rear seat.

In the style of dickey seats fitted to coupes and roadsters in the 1920s and ‘30s, this offers wind-in-the-hair seating for two to take total passenger accommodation to eight.

The body was finished in Spies Hecker white pearl, which suits the shape and style of this creation and – obviously – makes it ideal for weddings, too. 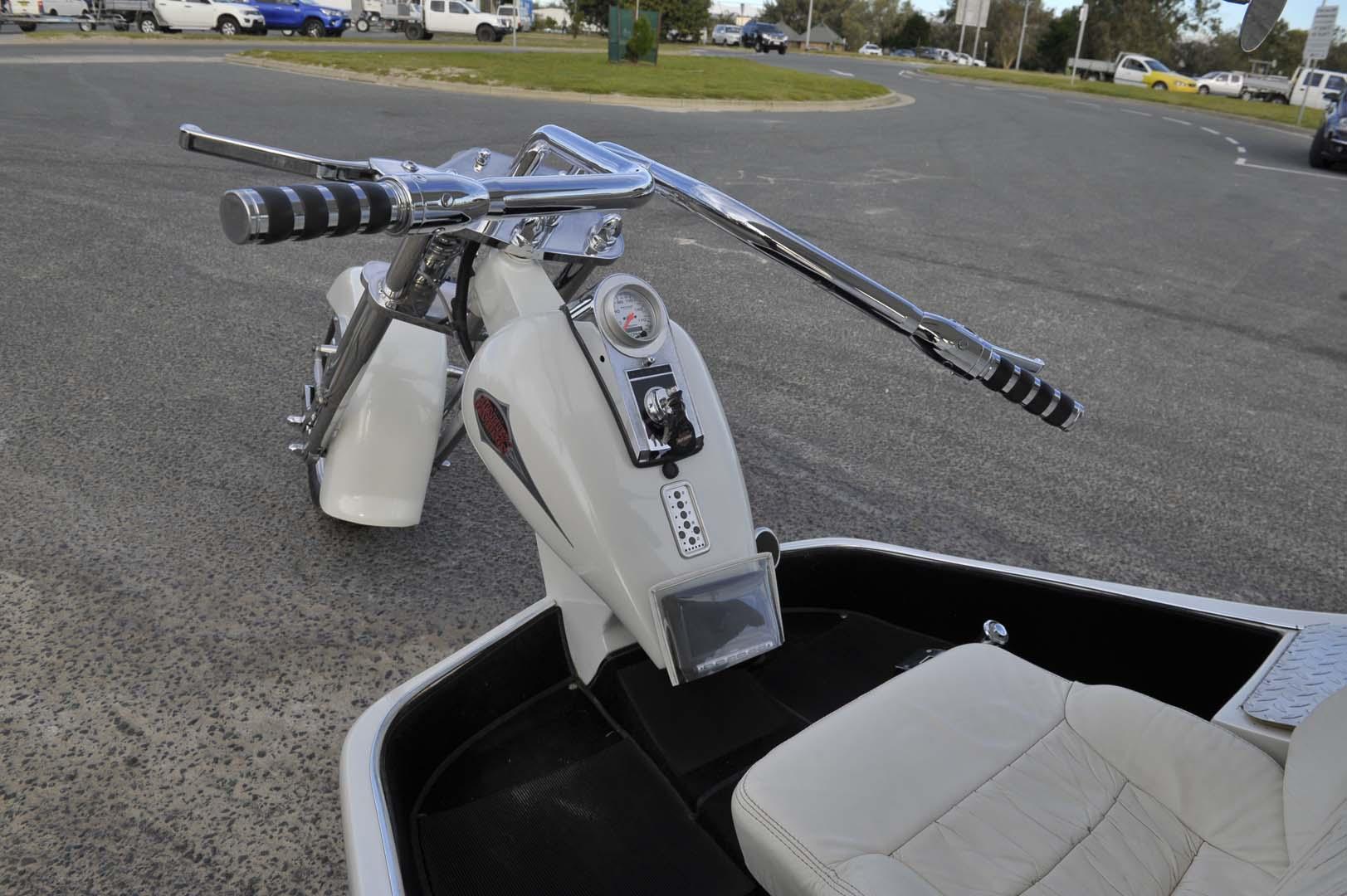 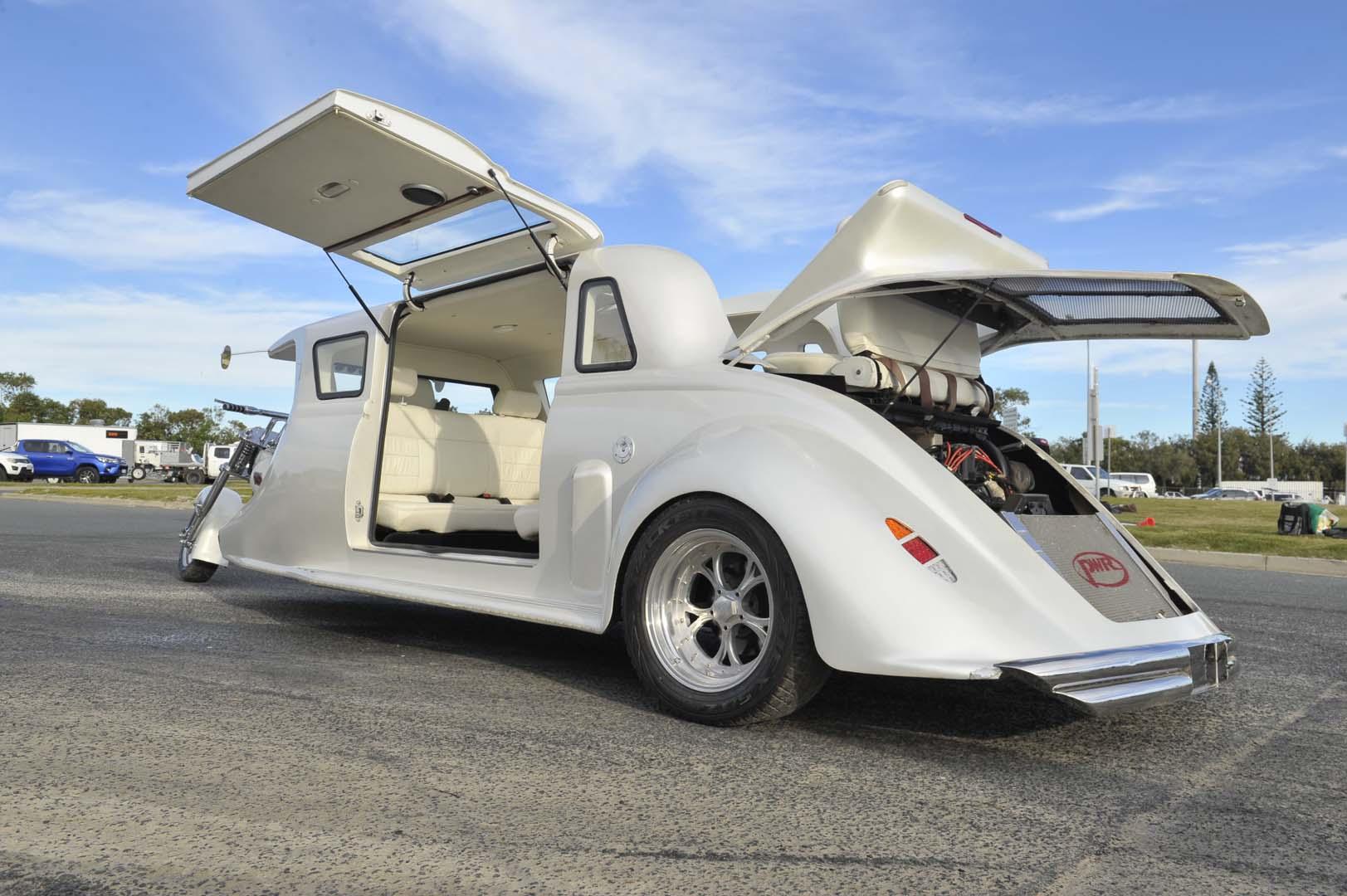 After a year-long build costing close to $350,000, Mac’s ‘limo trike’ was completed in early 2010 and pressed into service with Wildfire Tours immediately after.

As you can imagine, the trike attracted a LOT of attention, and not just on the Gold Coast. International notice led to Mac and the trike being invited to the Essen Motor Show in 2012. Germany’s answer to SEMA, this global showcase for the tuning, custom and aftermarket industry saw the limo trike generate huge interest, but by this stage, competing business interests had led Mac to decide to put the limo trike on the market.

In 2017, it came to the attention of Frank Natoli, who purchased it.

Based in Brisbane, Frank had built himself a 48/215 Holden stretch limo back in the 1990s, so knew the earning potential of these vehicles. However, a trike like this certainly wasn’t on his radar originally.

“I was after a trike, but this one was better than what I had expected – I couldn’t not buy it!” Frank laughed.

Since purchase, Frank has maintained the vehicle, fitting new batteries, a new fuel pump and starter motor. He’s also updated it, enhancing the engine performance to around 300kW (400+hp) and completely upgrading the braking with new Wilwood discs, calipers and master cylinders.

LED rear lights have been fitted, with an all-new, custom-made rear bumper bar added, too, while the body was treated to a full respray in 2018.

Intending to run it for tours, weddings and formals like Wildfire had done, Frank unfortunately suffered serious health issues before these plans could come to fruition, leading him to offer the vehicle for sale. 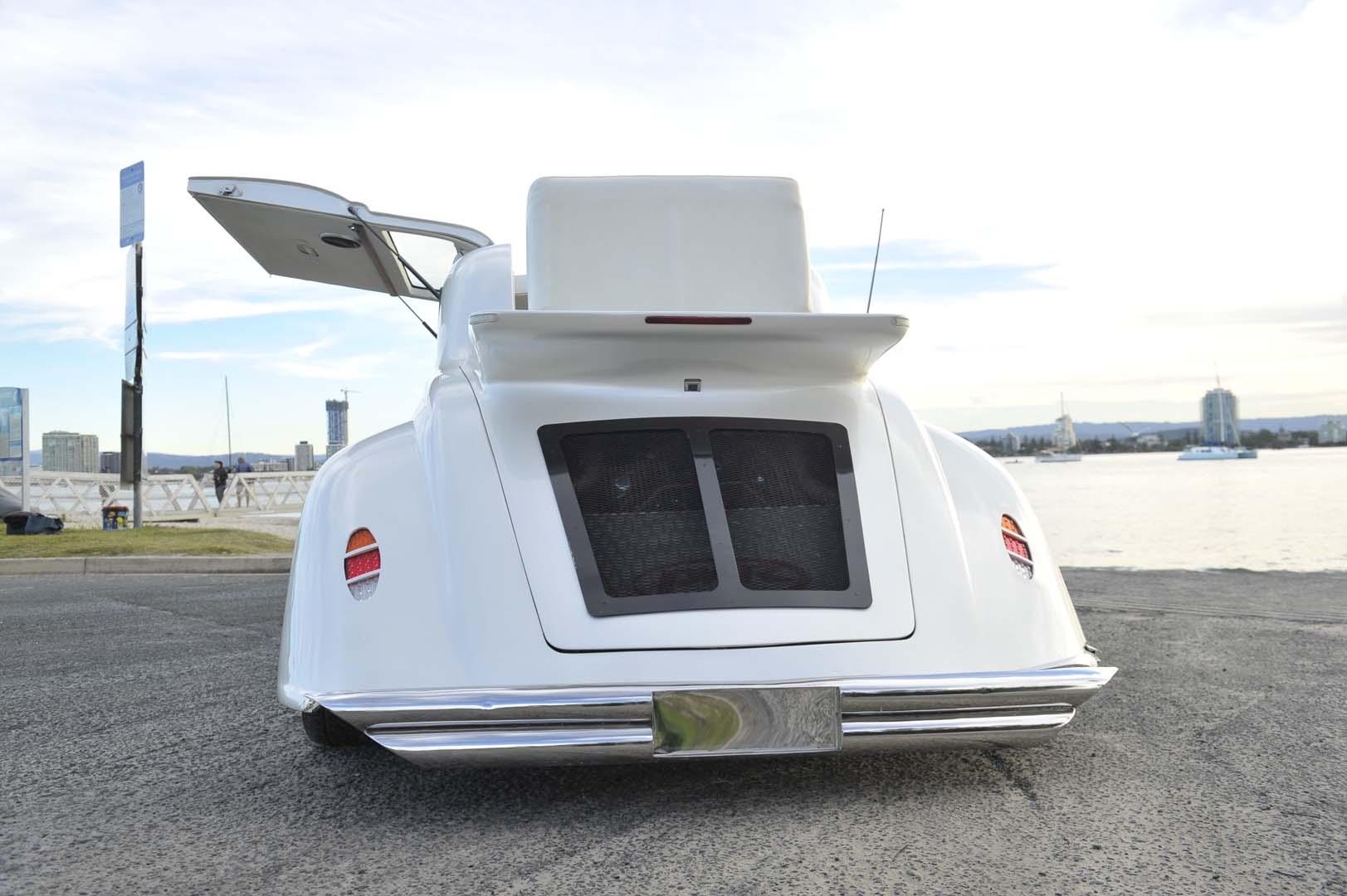 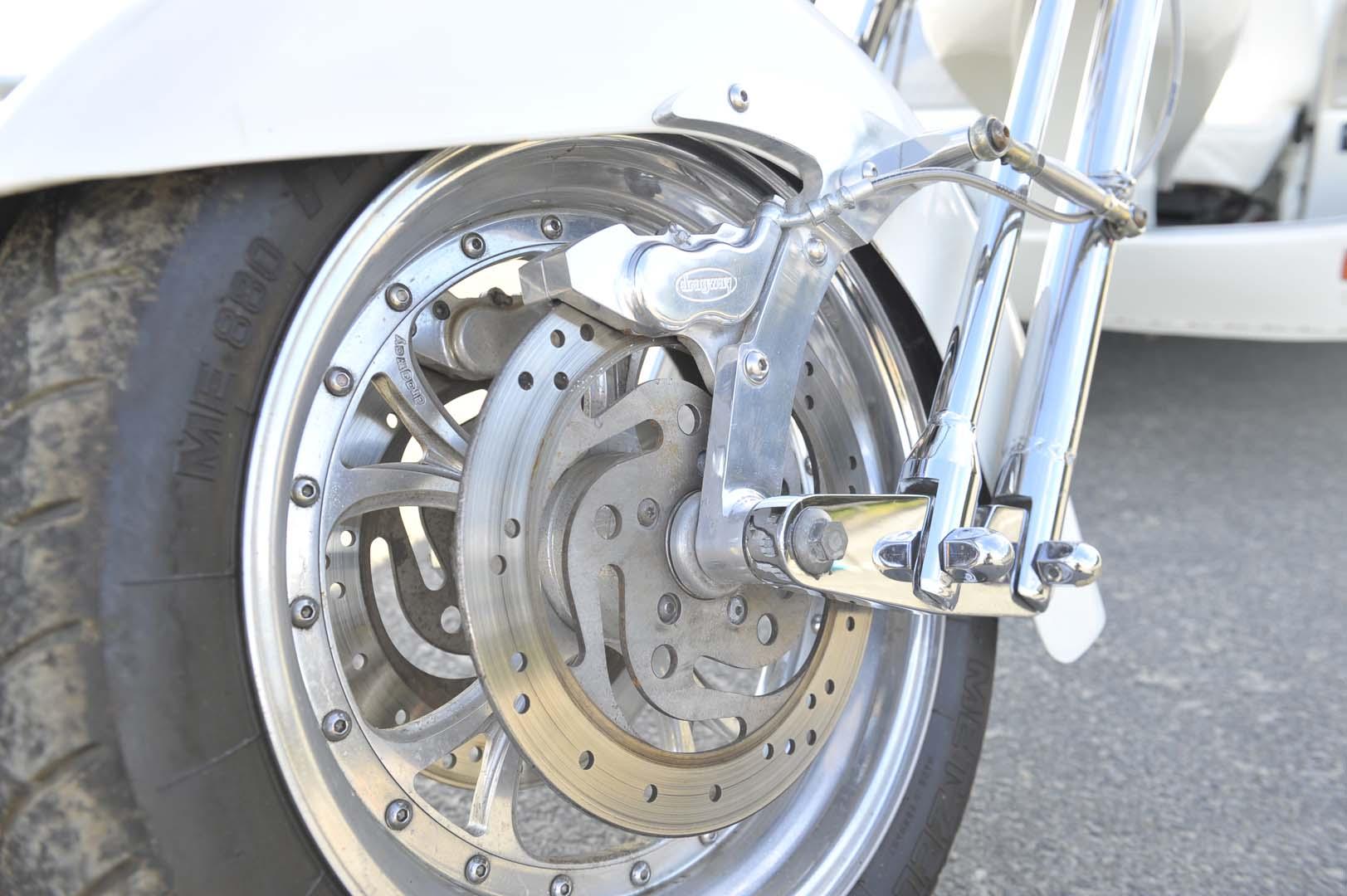 A Standout – and Outstanding

In his limited time driving the limo trike, Frank describes it as a machine that accelerates, handles and corners surprisingly well – and even better since his upgrades - while the fresh paint means the thing positively gleams in the sun.

“It’s a real headturner,” Frank says. “Coming down from Brisbane for this photoshoot on the Gold Coast, we had people follow us all the way down.”

While at the photoshoot, a Netflix production that was shooting nearby expressed interest in using the limo trike in a future production.

Outside of film and TV opportunities, the touring and formal hire work is where this creation’s potential really lies. Frank estimates a canny operator could draw in up to $10,000 per week on tours alone, with the premiums for wedding hire further increasing income.

Made for the sunshine state and best enjoyed in the sun, this limo trike has got a lot of potential. But no matter where the new owner takes it or what they do with it, this trike will certainly continue to turn heads. 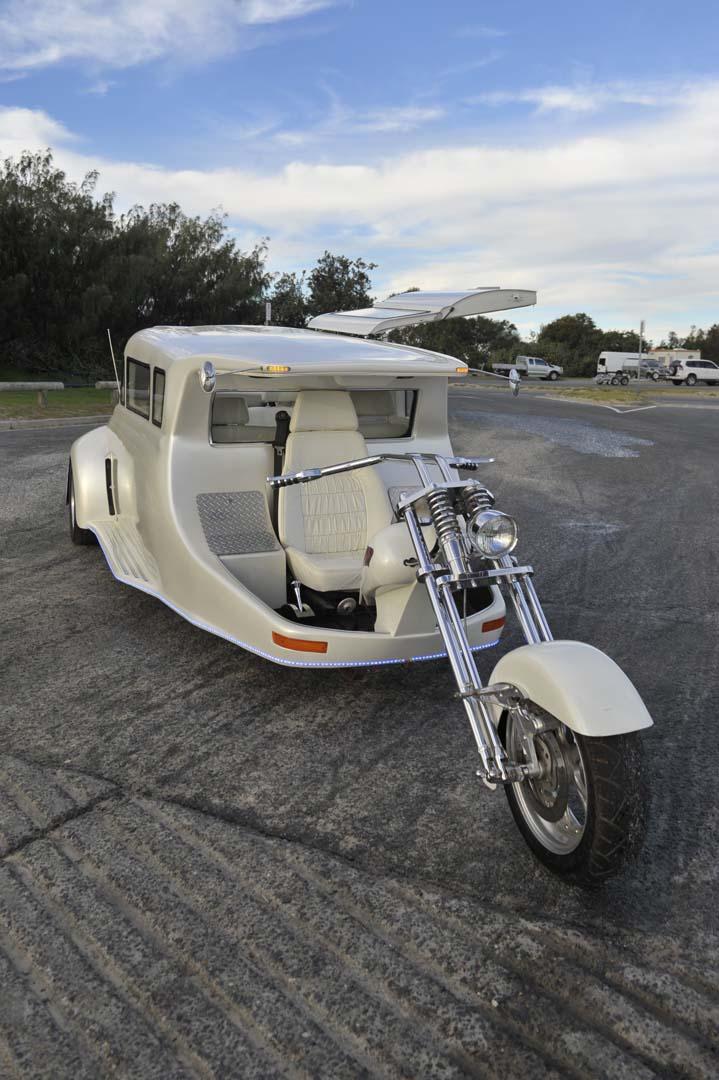 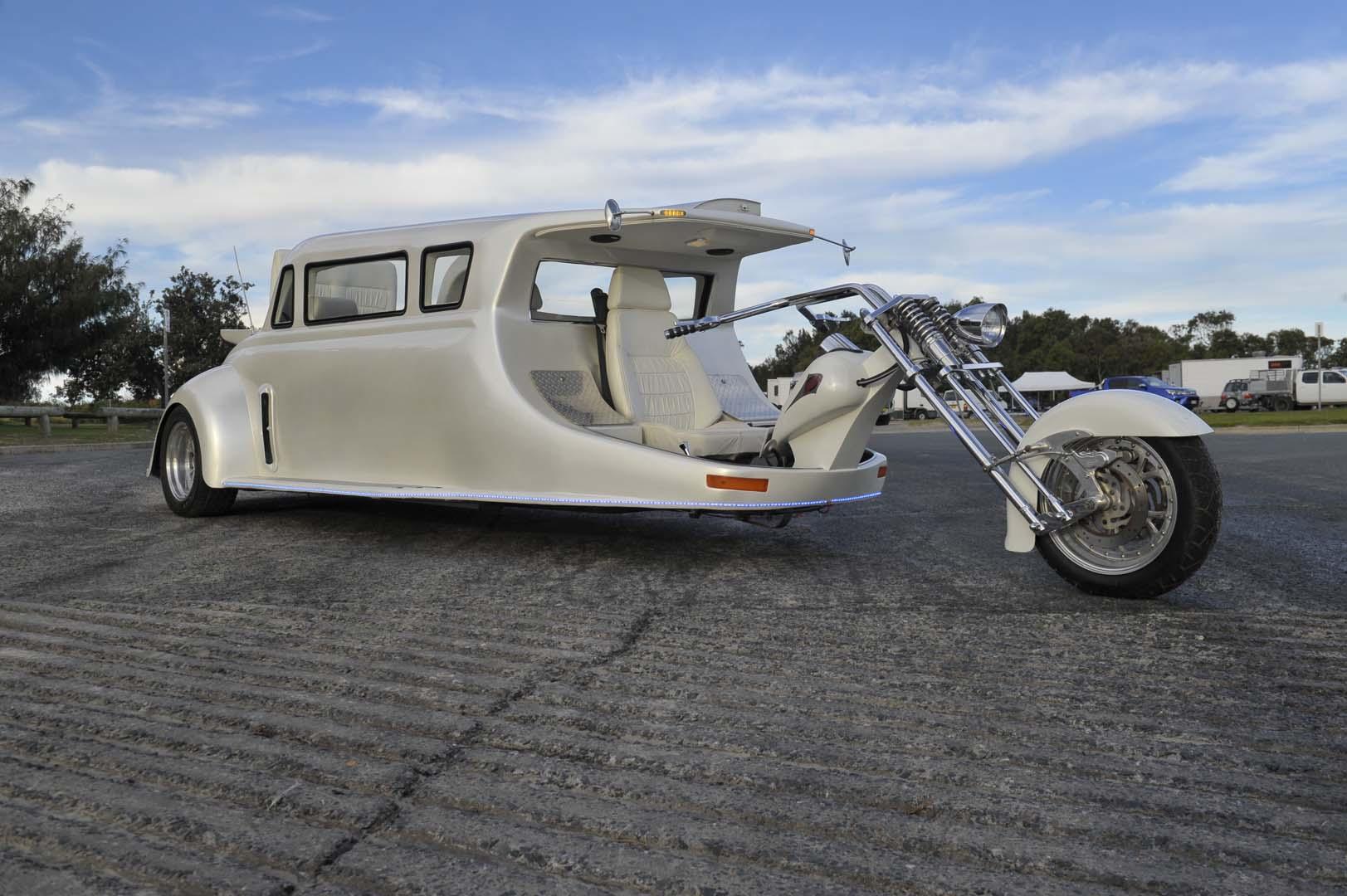 With health issues forcing the cancellation of his plans to use this trike as a hire vehicle, Frank has put it on the market.

Repainted and with the brakes completely refurbished amongst other additions and improvements, this outstanding creation is ready for the new owner to use.

Currently unregistered, a new Queensland RWC can be supplied upon sale.

View the advert online at https://www.justbikes.com.au/ with the ad code JBM5008517. 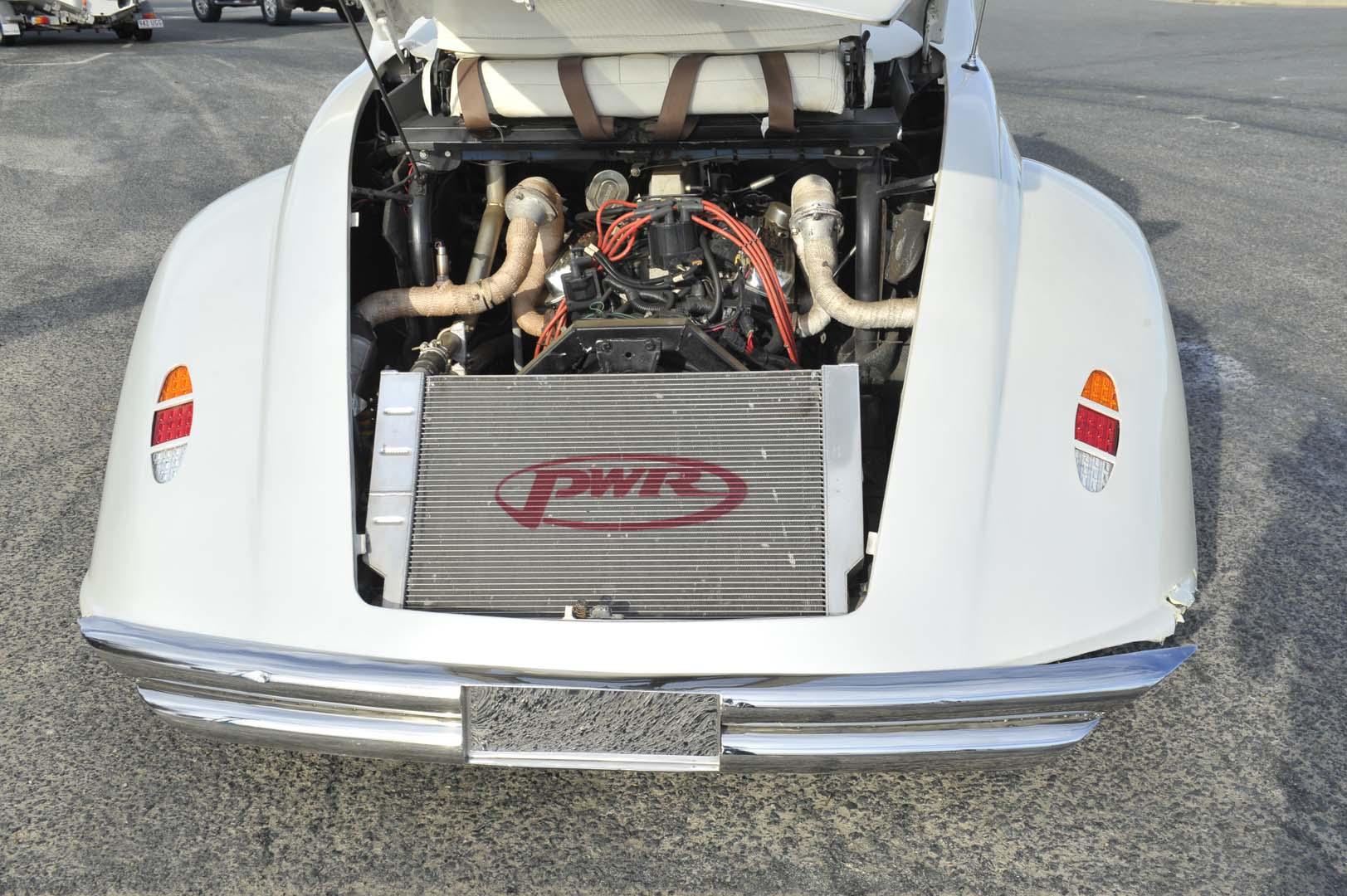 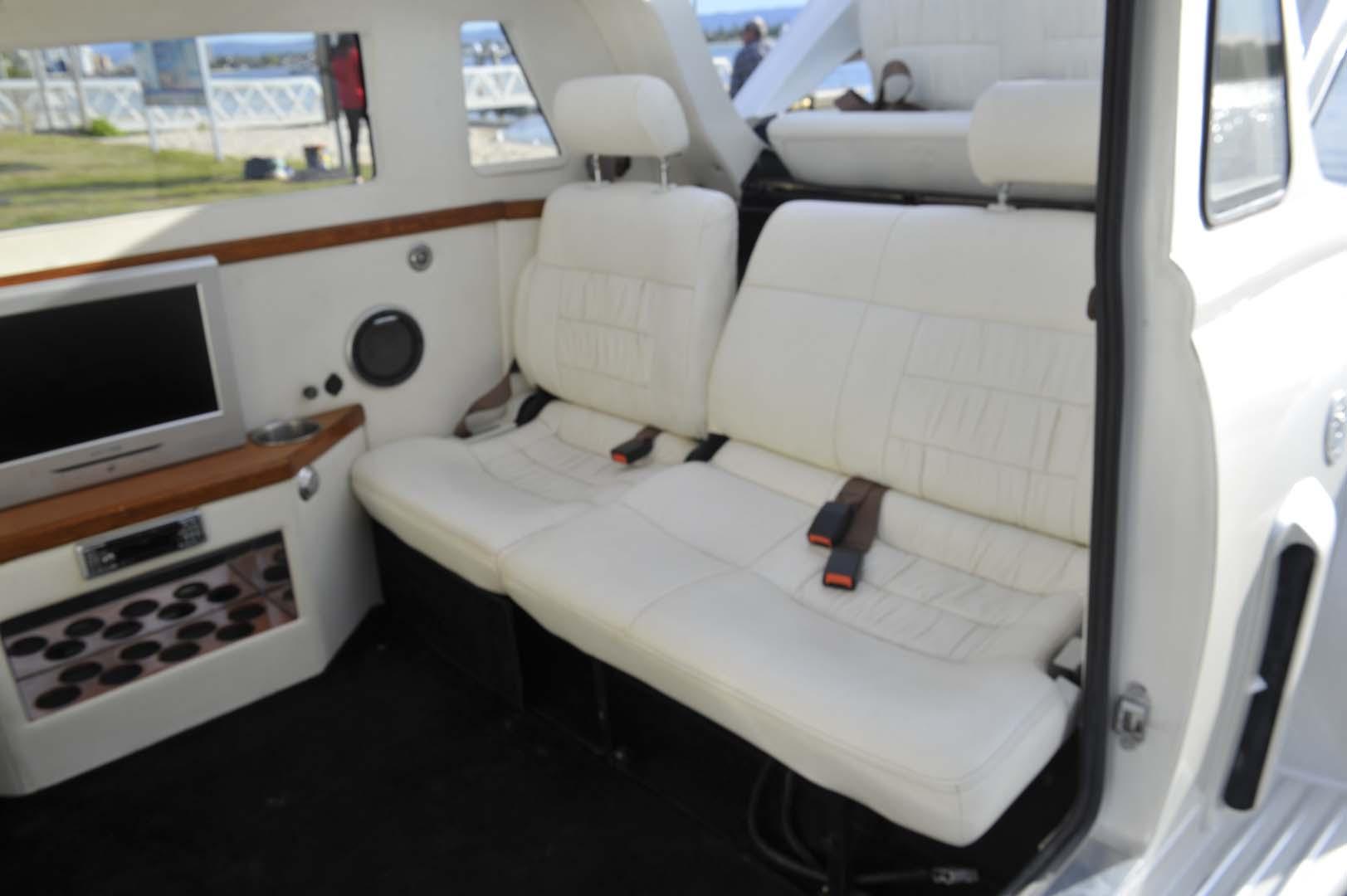 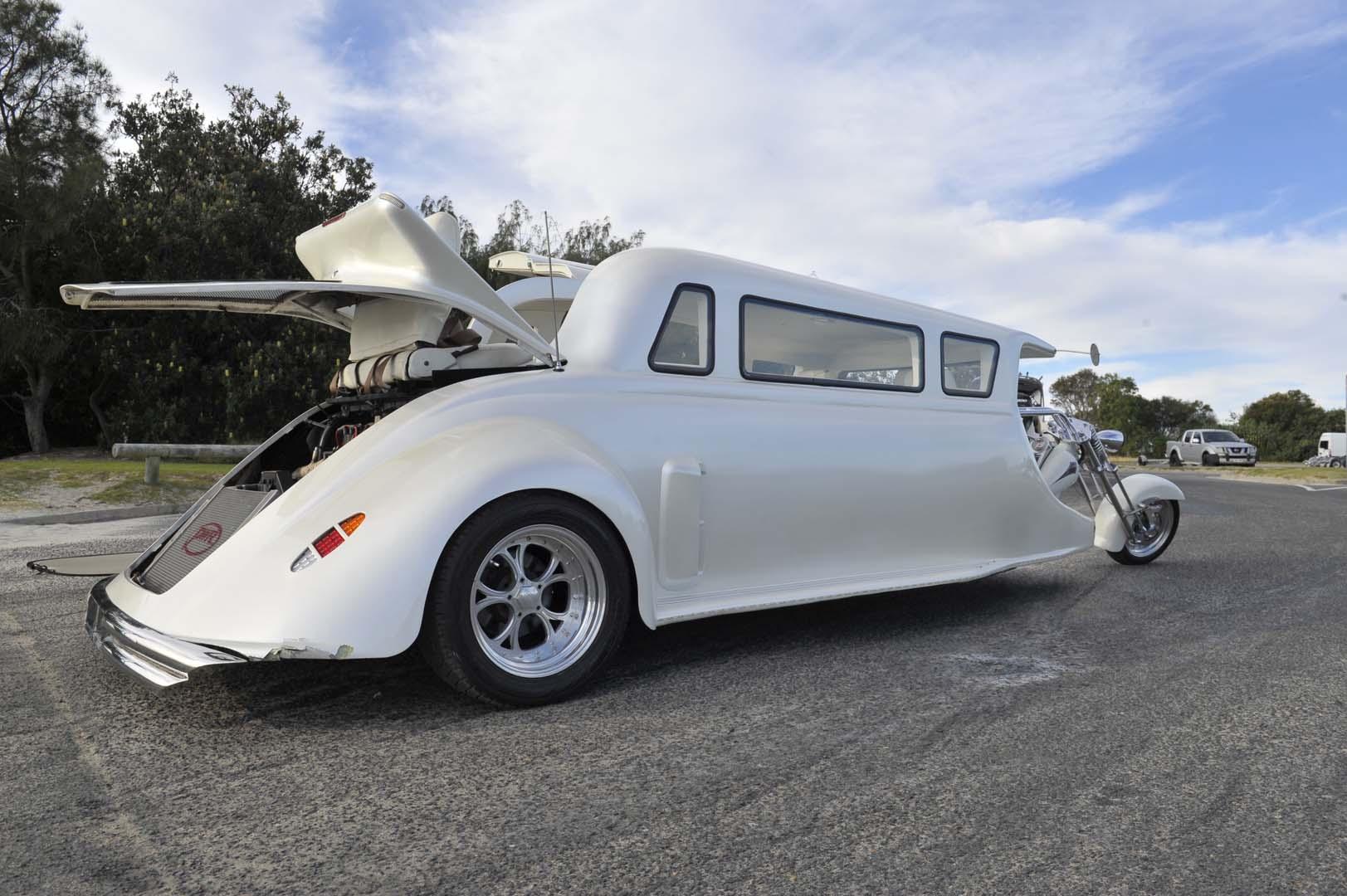