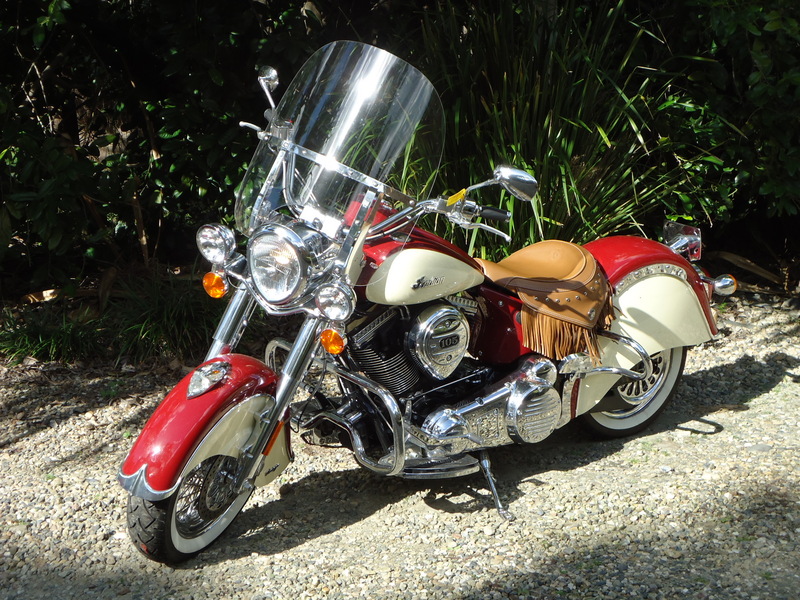 To backtrack a little, British-based Brockhouse Engineering sold rebadged Royal Enfields as Indians soon after the original Indian went under, but this effort petered out with the demise of AMC (AJS, Matchless, etc.) in 1962. The first domestic effort to revive Indian was undertaken by Floyd Clymer (of motorcycle manual fame) soon after, with the name first applied to minibikes, then to larger capacity motorcycles using an Italjet-based frame and Royal Enfield or Velocette engines. This effort survived until the late 1970s, when a messy legal tangle over who actually owned the rights to the name dragged on for decades. In 1999, Indian was revived again in the form of the short-lived 'Gilroy' Indian cruisers built in California. When that concern went bust in 2003, Indian lay dormant for a year, before UK-based Stellican Industries announced they had purchased the rights to the 'Indian Motorcycle' name and were planning to build an all-new range at manufacturing facilities in Kings Mountain, North Carolina. Initial release was scheduled for 2007, but delayed numerous times, with some naysayers predicting the new operation would never get off the ground. When they finally hit the market in 2009, the first products of the new 'Indian Motorcycle Company' under Stellican stewardship proved to be worth the wait.

Four motorcycles, all bearing the historic 'Chief' name, were available in that debut year, and of those four, the Chief 'Vintage' was arguably the most impressive. Already dripping in retro touches like the deeply-valanced mudguards (referred to as 'long fenders' in company brochures), old-style fringed leather solo seat and saddlebags, the Vintage offered another nod to the past in the range of two-tone "vintage" paint schemes available. While three different single shades (Thunder Black, Indian Red and Ivory Cream) were standard, the two-tone options proved to be overwhelmingly popular. For 2009, those options were: Thunder Black/Indian Red; Willow Green/Ivory Cream; Indian Red/Ivory Cream; and Navajo Turquoise/Winter White.

The Chief Vintage also featured chrome highway bars, chrome seat grab rail, a removable pillion seat, wire spoke wheels, whitewall tyres, a quick-detach windshield and chrome tank badge. While some of these features were options across the other 2009 models, the long fenders, laced spoke wheels, whitewalls, 'Indian' chrome tank badge, distinctive fringed seat and saddlebags were standard on the Vintage. At approximately 770 lbs (350kg) laden, the Chief Vintage was no lightweight. In fact, it was the heaviest of the range, but certainly not a behemoth compared to other cruisers on the market. All its extra bling made the Vintage the most expensive of the new quartet, too, at US$35,499, compared to US$30,999 for a Chief Standard.

What set the Stellican Indians apart from past revivals was a commitment not only to high quality standards, but also to making the new Indian as bespoke a motorcycle as possible. While previous "Indians" had been merely rebadged examples of other makes, or used a high percentage of aftermarket parts, the Stellican Indians featured many proprietary components, including the engine. The 'PowerPlus' v-twin applied across the 2009 range had its roots in the last of the Gilroy Indians and was a nod to the famous Indian Powerplus engines that first appeared back in 1916. While the original Powerplus was 998cc, the all-new PowerPlus was a 1720cc (105ci) v-twin with distinctive bottlecap-style rocker covers and electronic fuel injection. A six speed transmission and chain drive were standard for all Chief variants. The frame on the Chief Vintage was high tensile steel, with modern front and rear suspension and ventilated disc brakes front and rear.

Respect for the Stellican Indian revival was reflected in the positive reception the new models received. Road testers praised the grunt from the PowerPlus engine, particularly its acceleration, as well as the stopping power from the Brembo-sourced disc brakes. The 2-into-1 exhaust system was another exclusively Indian part, and featured a three-way catalytic converter and heated oxygen sensors. The new Indian has yet to draw the attention of the aftermarket industry, so there are few options available for engine/exhaust tuning and modification.

The Chief's ergonomics came in for praise during road tests, too. The low seat height made for comfortable riding, aided by well-place footboards, a low centre of gravity and adjustable brake and clutch levers. A slightly longer wheelbase, compared to most other cruisers, made for good stability, while the 25-litre fuel tank was comparable with the modern touring king, Honda's Goldwing.

While the new Indian was generally agreed to be a worthy bearer of the classic name, a limited model range and equally limited clientele meant its future was by no means guaranteed. All that changed with the purchase of Indian by Polaris Industries earlier this year. This has not only brought newfound security, but has given hope to local enthusiasts that future Indian motorcycles may appear alongside Victory cruisers in Australian dealerships. Until that happens - if indeed it happens at all - some of the privately-imported examples are the only option for local enthusiasts wishing to purchase a modern interpretation of the classic Indian. If you want attractive retro style with the latest performance and reliability, it's hard to go past a new Indian Chief. 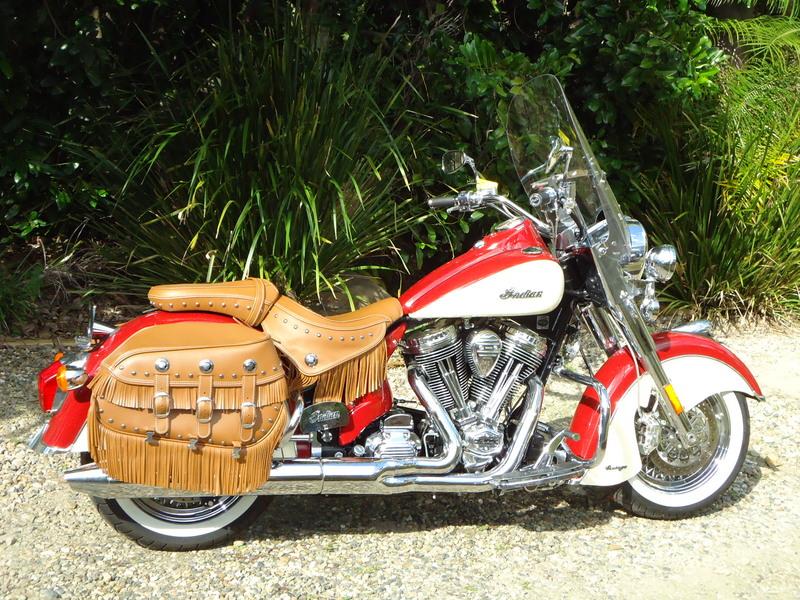 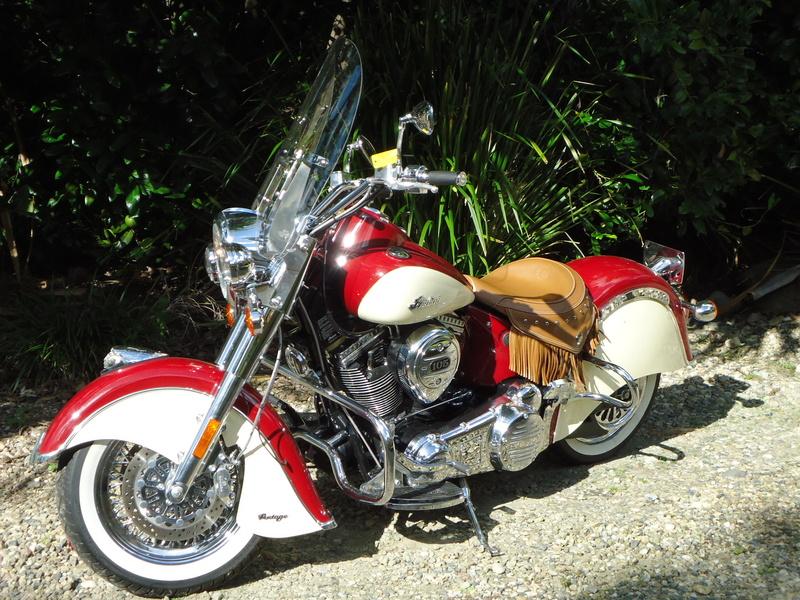 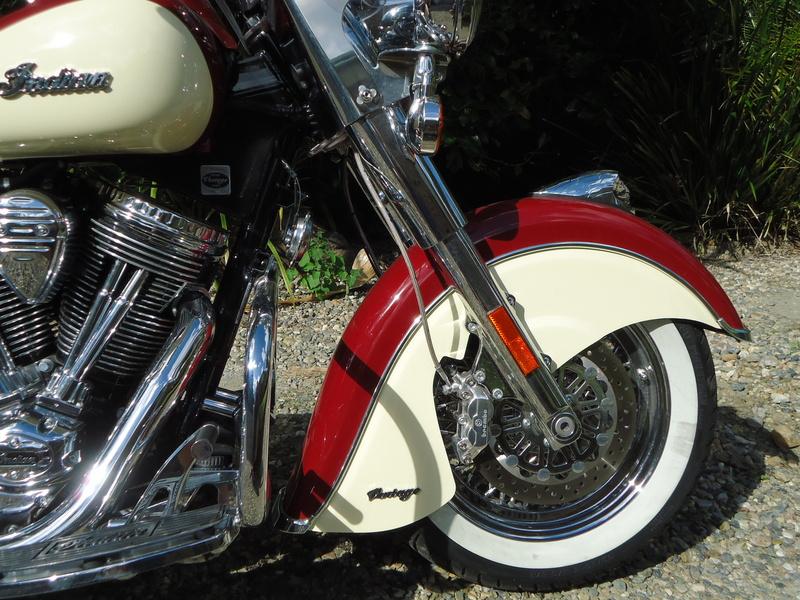