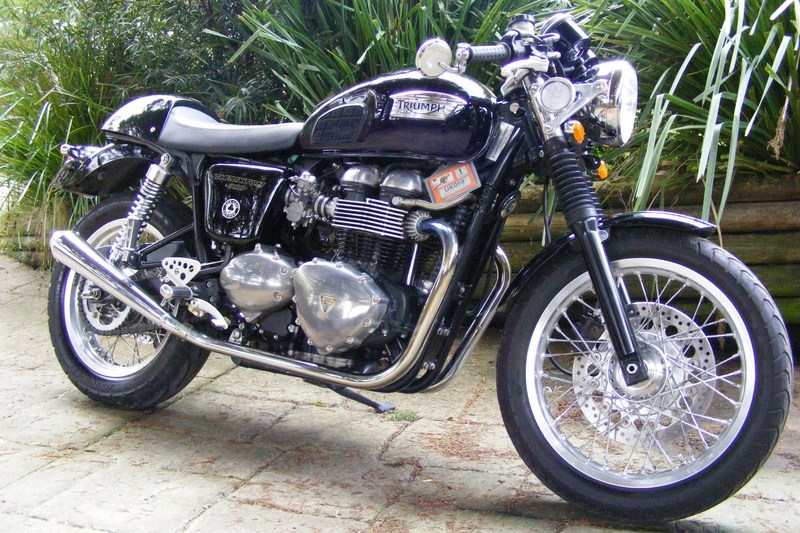 The name came from the racing circuit in Hampshire, England where Triumph duelled with the likes of BSA and Norton That success led to the name being applied to one of their racing models
When it made its debut in 2004, the Thruxton was the latest in a slew of retro-inspired models from Triumph that kicked off with the reborn Bonneville from 2001. The success of that model was followed by a slew of derivatives, starting with the 'America' in 2002, and the 'Speedmaster' in 2003. A year later, the cafe racer-inspired 'Thruxton 900' was added to the Bonneville family.

The name came from the racing circuit in Hampshire, England where Triumph duelled with the likes of BSA and Norton That success led to the name being applied to one of their racing models. The looks came straight out of the 1950s and 60s when souped up, stripped down road bikes were the signature rides of the 'Ton Up Boys' and the 'Rocker' lifestyle. Five decades later, that lifestyle, or at least the "look" of it, is booming once again. Even back at the start of the new millenium, café racer subculture was popular, so it's a wonder a café racer-styled model wasn't added to the Bonneville lineup sooner. One suspects that Triumph needed to confirm the success of the reborn Bonneville before they could start thinking about any companion models. The immediate success of the new 'Bonnie' saw development work on the Thruxton commence in 2001. By mid-2003, the styling and engineering had been settled on, and the Thruxton 900 was unveiled later that year.

A winner right out of the box, few year-on-year changes were needed, so the 2008 model Thruxton differed little from its 2004 predecessor. The 2008 Thruxton's parallel twin was the same as that used on the Bonneville, but with an increased bore (865cc over the Bonneville's 790cc), revised camshaft profiles and re-jetted carburettors. The same 360 degree firing order as the Bonneville was used (America and Speedmaster models used a 270 degree firing order), but the larger pistons and hotter camshaft meant the Thruxton offered around 7bhp more than the Bonneville's 62bhp, with the increase most noticeable at the upper end of the rev range. The transmission was also the same 5 speed manual with x-ring chain and wet, multi-plate clutch as the Bonnie. Other changes over the standard Bonneville included longer rear suspension units and modifications to the front forks to make steering and handling a little sharper. The exhaust was redesigned to make best use of the power increase delivered by the 865cc twin, while the Thruxton also featured improved braking, with a larger front disc than the Bonneville.

Of course, you can't talk about a Thruxton without talking about its styling. All the classic café racer visual cues are there: clip-on handlebars; exposed gauges; rearset footpegs; slim front mudguard; spoke wheels; humped solo seat; and bar-end mirrors. The mirrors were specially-designed by Triumph and fitted as standard to new Thruxtons, although some markets dictated more conventional mirrors be fitted. Thruxtons seen in Australia seem to have a mix of bar-end and conventional mirrors. The debut year Thruxton was offered in Jet Black or Sunset Red, but colours for 2008 included: Tornado Red with a white stripe on the tank and seat hump; Jet Black with gold stripe; and Aluminium Silver with a red stripe. The thick centre stripe was purely styling fancy, but added to the Thruxton's sporty look. Triumph offered a range of accessories to suit, everything from various chrome add-ons to a fly screen fairing and even a set of soft luggage panniers. Small 'Thruxton 900' badging adorned the top of the tank and sidecovers, with the classicly inspired Triumph grille-style badge taking pride of place on the tank sides.

For all its retro styling features, the Thruxton wasn't backward, as it featured electric starting, electric carb heaters, modern disc brakes, adjustable Kayaba suspension, and a modern set of gauges and warning lights. The brakes are an interesting point, as one would have expected twin front discs on a 'sports' model. Apparently, Triumph's development work on the Thruxton determined that braking performance was already good enough without the addition (and additional weight) of a second front disc.

Road tests generally gave the Thruxton a thumbs up. The performance from the hotter Bonneville engine was praised, as was the steering and general handling. Some found the suspension to be a little soft when pushed to its limit, while mild vibration at high revs was also noted. The only common complaint, if you could even call it that, against the Thruxton was the mellow exhaust note coming from the twin chrome pipes. Some were no doubt expecting something a bit more raucous from an homage to the 'Rocker' era!

As much as its engineering and performance were of merit, it was the looks that the Thruxton was sold on. It's a bike to be seen - and be seen on. Triumph made sure there were enough classic café racer styling touches to ensure it was unmistakable at first glance, and attractive enough to prompt second and third glances. The Thruxton isn't exclusively about image at the expense of everything else. There are some compromises in terms of rider comfort thanks to the lack of a fairing and the hunched riding position required by the low bars and rearset pegs, but the Thruxton is quite usable for most applications, from commuting to touring. That said, the environment where a bike like this can be best enjoyed is the twisty country backroad.
As a slice of café racer style, but with the benefits of modern engineering, the Thruxton has a lot going for it. The 2008 model Thruxton is also significant in that it was the last model to be offered with carburettors. From 2009, induction was switched to fuel injection. As a 'best of past and present' bike, the Thruxton blends some unmistakably retro styling with modern reliability and performance. 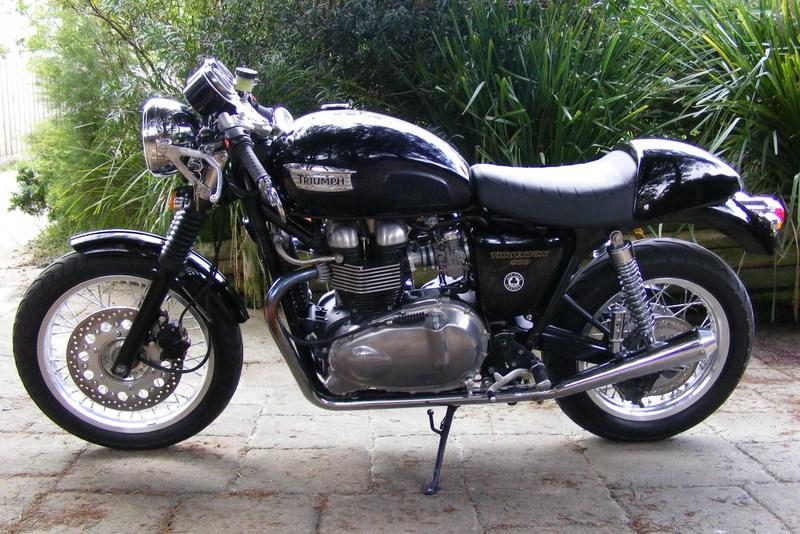 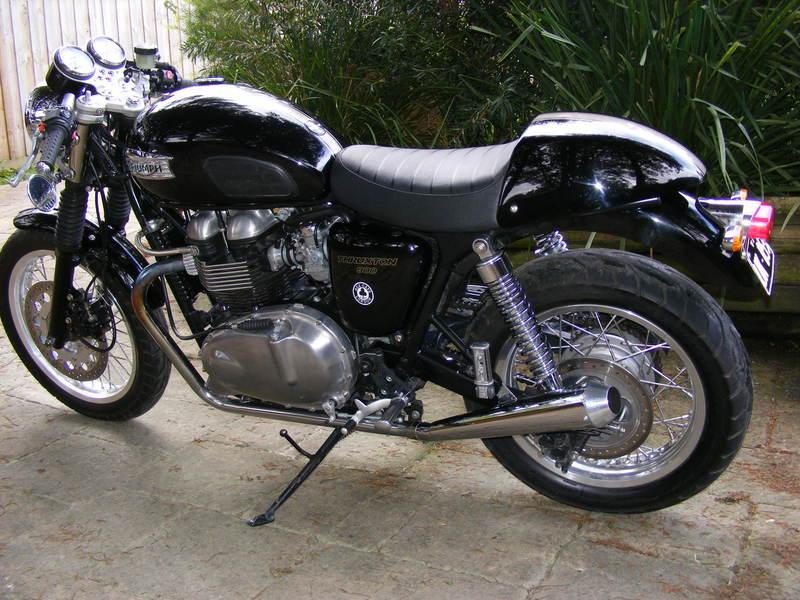