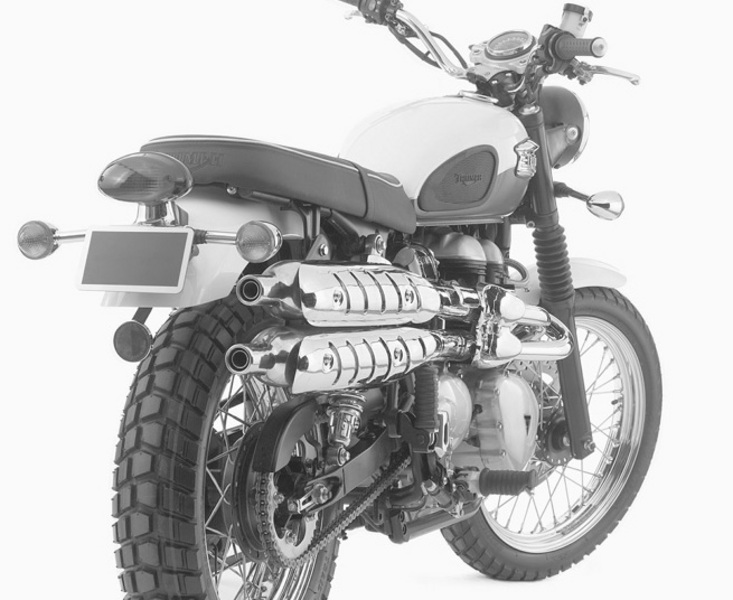 The 865 twin presents as a big, solid, do-anything motorcycle, that gives more than passing recognition to the road-based scrambler and desert racer style machinery that was popular through the 1960s and early 1970s, particularly in the US market. Its styling most closely resembles the Triumph TR6C, which was produced by the old Meriden works for around a decade from the mid-1960s. Among the accessories for the modern day version is a number 278 race plate, which is the tag allotted to Steve McQueen when he used a TR6SC to compete in the 1964 International Six-Day Trials in East Germany. The Scrambler's 865cc, DOHC, eight-valve, air-cooled engine uses a 270 crank firing interval for a smooth and torquey power delivery.

With a bore and stroke of 90x68mm and compression ratio of 9.2:1, the engine also features twin carburettors with throttle position sensors. Peak power of 55PS arrives at 7000rpm (with maximum torque of 69Nm available at 5,000rpm) and is fed to the rear wheel via a five-speed gearbox and chain final drive. Using a sturdy tubular steel cradle frame and long-travel suspension front and rear - 41mm telescopic forks and twin chromed spring preload-adjustable rear shocks - the Scrambler is built tough, to iron out the bumps. Its high, wide handlebars and high-set footpegs further aid control and low-speed manoeuvrability. The wheels are spoked and sized 19 x 2.5in (front) and 17 x 3.5in (rear). Both wear lightly-knobbled tyres in sizes 100/90-19 and 130/80-17. Twin piston calipers are used for both brakes, the front working a single 310mm disc, the rear a 255mm disc.

Steering geometry is set at 27.6 of rake with 103mm of trail with a wheelbase of 1480mm. The Scrambler has a dry weight of 205kg. "This is something a little out of left field," said Triumph Australia's Paul Grocutt, "and a real boost for the classic range. The early response to the bike has been super strong and we suspect our biggest problem will be keeping up with demand." Fittingly, for such an individual machine a whole range of Triumph Factory accessories will be available for the Scrambler, all of which enhance its looks as well as adding functionality.