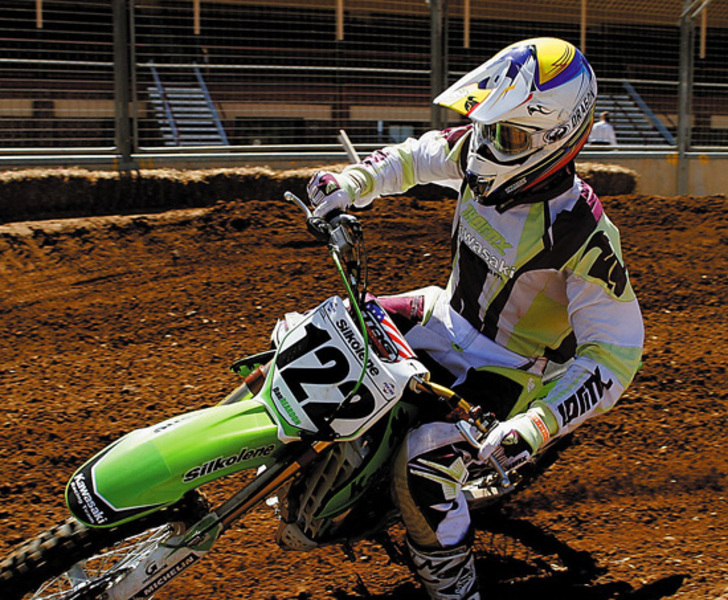 The overall success of the Kawasaki Silkolene Michelin team - their first SX Open round win since 2001 - was made all the more impressive by the fact that the win was achieved with an all-new rider combination: Daniel Reardon (SX Open); and Mitch Hoad (SX Lite). 20 year old Reardon, last year's SX Lites champ, had shifted from the satellite Whales Kawasaki team at the end of 2005 to join the factory squad, while Hoad's inclusion was a very late post-season affair when Kawasaki bosses realised the 21 year old 2005 Lites runner-up was out of a ride following Team Suzuki's decision not to field a Lites entry for this year's opening rounds. Before the season kick-off, Reardon did give a pointer to the potential of the new Kawasaki KX450F four stroke with a win in the non-championship M2R Stadium Motocross event in Brisbane in late January.

The Queenslander scored a hat trick of wins in Pro Open and backed up with 2 wins in the Pro Lites class at the event, all on the factory green bikes. For the Adelaide season opener, the evening was split into a best-of-three motos for each class, favouring those who could place consistently at the front of the field. In the Pro Lites, the field was a mixture of underdogs & newcomers like Lewis Stewart (Honda), Danny Anderson (No Fear Honda), Bronte Holland (KTM) and dual Junior class champ Kade Mosig (Full Throttle Sports Honda) taking on the veterans of the class in the form of Cameron Taylor (Serco Yamaha) and Troy Dorron (No Fear Honda), the latter focusing solely on Supercross for 2006. Timmy Weigand (Motorex KTM) also threw his hat in the ring, intending to compete in both Open and Lites classes so he can get a better handle on the distinctively tight and compact Australian Supercross circuits.

In the opening SX Lites moto, Hoad was the victor from a 20-rider field, surprising considering he crashed heavily in practice and only just managed to get himself and his bike together to finish the final pre-race practice. Anderson and Stewart filled the second and third places, Dorron in fifth and Taylor in seventh, leading home Serco teammates Jake Moss (8th) and Robbie Marshall (10th). In moto 2, Dorron showed he's not done with yet, comfortably winning ahead of Hoad and Taylor, Anderson scoring another consistent fourth in his first official hitout on the factory CRF250R Honda. Taylor secured the holeshot for the final moto, he and Marshall making it a 1-2 for the Serco team at the chequered flag, but a sixth from Hoad, following a lap one crash, was enough for him to secure the round win from Taylor by three points, Anderson third overall heading into round two in Perth on March 25. "I'm stoked," Hoad enthused after his unexpected win. "Coming out of the first round with a win is always good!"

In SX Open, all the focus was on the anticipated battle between last year's champ, Troy Carroll (CDR Nokia Yamaha) and runner up Craig Anderson (No Fear Honda). The move of Danny Ham from Suzuki to the Axis Motorsports Honda CRF450R and the inclusion of fast American Timmy Weigand to the Motorex KTM lineup sure to spice up the pointy end of the field. 2005 Pro Open MX champ Daryl Hurley, still recovering from a broken leg, was lucky to make the event at all, while Kawasaki's other SX Open rider, Warren Smart, was a non-starter, still recovering from a foot injury. In the opening moto, Carroll struggled to get off the line, unable to find his true pace for the remainder of the night.

Weigand made up for his poor showing in the Lites with a close victory over Cody Cooper (No Fear Honda) and Reardon that included a blazing 43.859second lap, the fastest of all classes on the night. Cheyne Boyd (CDR Nokia Yamaha) was a distant fourth, former Team Kawasaki rider Shane Metcalfe fifth in his first hitout on the Team Seven M2R Racing Honda. Anderson was shunted over a berm on the first lap and struggled to make up ground on the leaders, while Luke Burkhart (Shift Motul Suzuki) was looking at a podium mid-race, but clipped a bank with his brake lever and went down, rejoining to finish seventh behind Suzuki teammate Hurley, who also was shoved down the pack following an opening lap incident.

Weigand would triumph again in moto 2, but this time it was Reardon that was breathing down the American's neck in the 10 lapper, Weigand's KTM teammate Daniel McCoy making up for a poor moto 1 result to finish third. Cooper's notoriously bad starts conspired against him again in moto 2, the kiwi struggling to finish eighth, while the luckless Hurley, suffering from a lack of race fitness, crashed twice. In the 15 lap final SX Open moto, Weigand's hopes of a clean sweep were dashed with a fall in the whoops mid-race, Reardon and Burkhart then setting the pace, the former winning over eight seconds at the finish, Anderson reclaiming some pride from the night with the final podium spot. 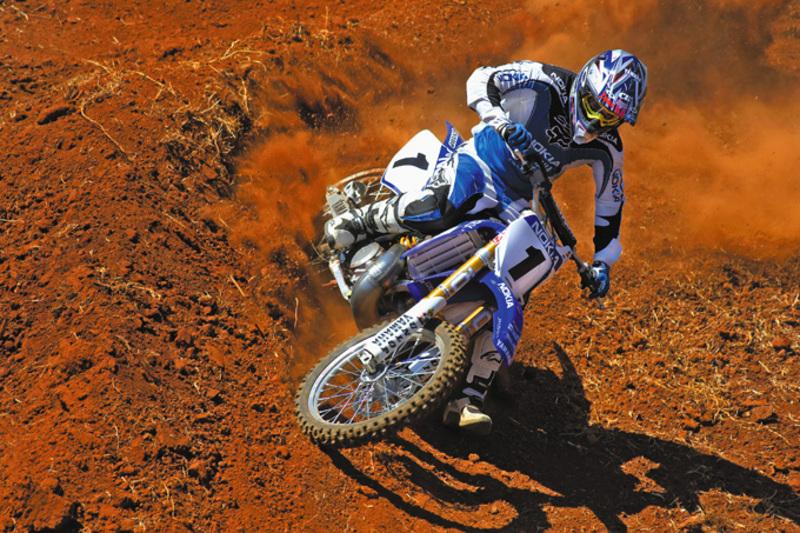 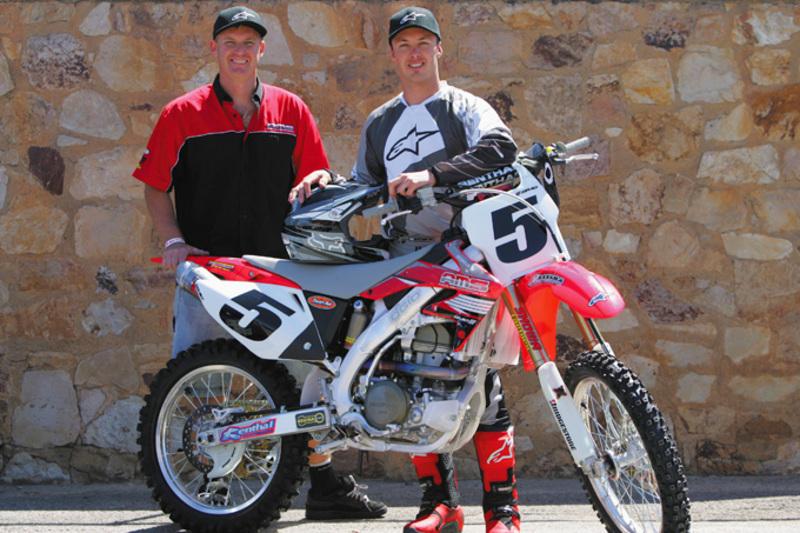 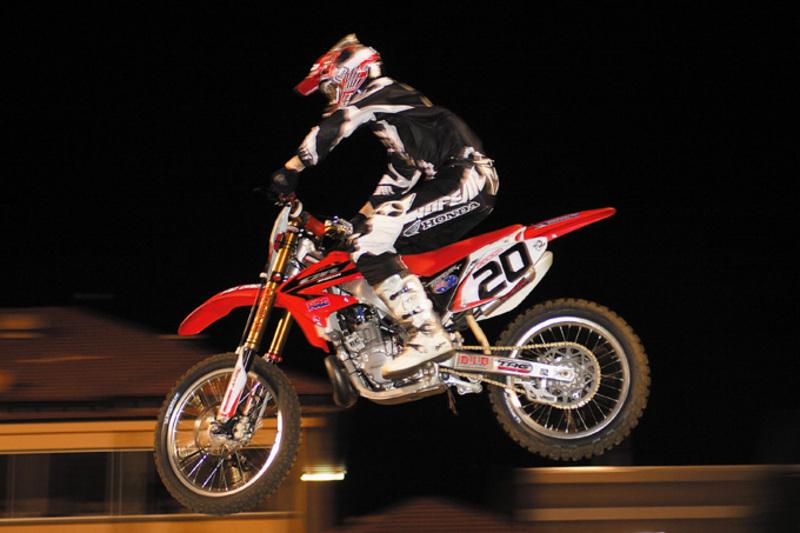 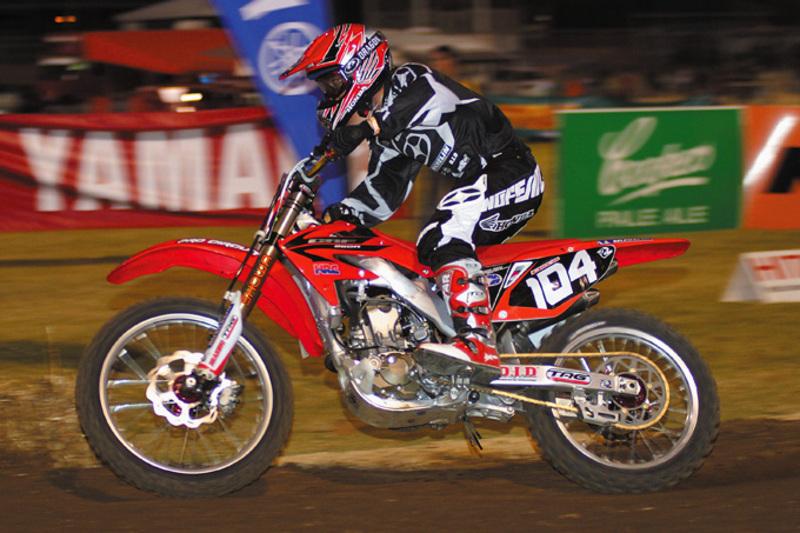