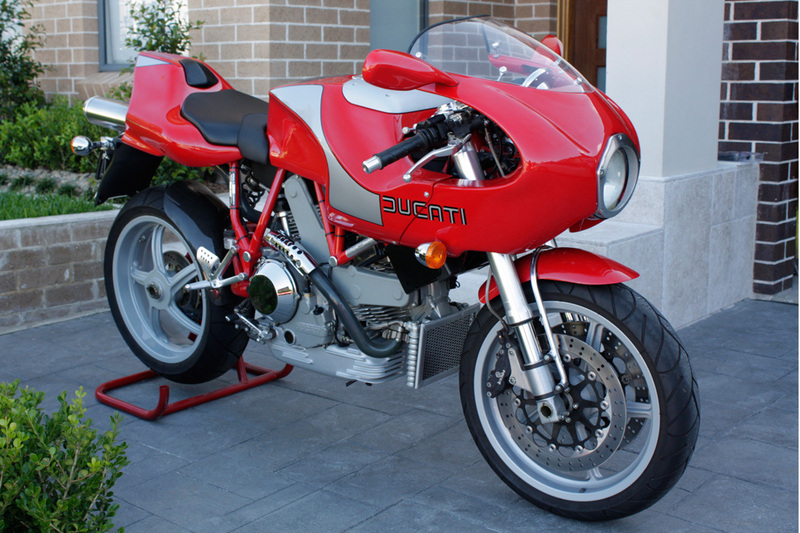 It's impossible to talk about the Ducati MH900e without mentioning two things: firstly, its looks; and secondly, its looks!
Ducati honours an iconic classic with a modern classic

It's impossible to talk about the Ducati MH900e without mentioning two things: firstly, its looks; and secondly, its looks!

The MH900e has always been something of a 'love it' or 'hate it' bike. Whether you find it appealing or appalling, it's hard to be indifferent about it. One thing that both sides of the argument can agree on is that it's certainly eye-catching.

While it made its debut as a concept showbike in 1998, the MH900e has its roots a couple of decades further back. Students of motorcycle history, and particular motorcycle race history, will know that the 1978 Isle of Man TT was characterised by Mike Hailwood's return from retirement. On an NCR-tweaked Ducati 900 SS, "Mike the Bike" wasn't given a huge chance against the big budget Japanese teams and riders the likes of Phil Read in the saddle. Of course, Hailwood won, wrapping up the motorcycle Formula 1 World Championship for Ducati, and further enhancing his own legend status. That success led to the Mike Hailwood Replica (MHR), which was produced for the next seven years.

Fast forward to the late 1990s and Ducati's newly-appointed design director, Pierre Terblanche, started work on a showbike inspired by the original Hailwood racebike and the replicas that followed. The initial aim was just to draw punters to the Ducati stand at the 1998 Intermot motorcycle expo in Munich. It achieved that aim and then some, getting people not only talking about the concept, but talking about Ducat, too. Opinion was split, though. Just as the Terblanche's design for the 999 would alienate Ducatisti in droves a few years later, the MH900e ('e' for evoluzione = evolution) had plenty of haters. However, there were enough lovers, and enough persistent requests from those who wanted an MH900e of their own, for Ducati to seriously consider putting it into production.

Those who loved the MH900e got their wish in 1999, when Ducati announced the bike would go into production. Limited to 1,000 units, what would set the MH900e apart from other limited edition machines was the way it was offered. Eschewing conventional practice, Ducati made the MH900e available exclusively via the internet. The order books opened just after midnight on January 1st, 2000 at ducati.com. Before the first day of the new millennium was over, every MH900e was sold. Such was the demand that Ducati committed to producing another 1,000 units, and they were snapped up in a few short weeks, too, but the 'lag' in building the additional units meant some were titled as 2001 models.

Aside from the exclusivity, the appearance was obviously what drew a lot of those early buyers to the bike. Design-wise, the MH900e had some obvious references to the original MHR Ducati, most notably the fairing, large single headlight, tank graphics and solo seat. The half-fairing was integrated into the tank, with the tail unit truncated to show off the chrome tips of the high-exit exhaust. The decision to chrome the exhaust silencers came about from direct enthusiast feedback, and was another example of Ducati using the 'net for "instant" market research. On Terblanche's original showbike, the rear indicators were mounted on the exhaust, while mirrors were replaced with a rear-view camera and console-mounted monitor. Neither of these were practical for the production MH900e, so conventional indicators and mirrors were fitted, but they didn't detract from the overall design.

The wheel design has elements of the MHR original, albeit on five spokes instead of six. In another concession to practicality, the ultra-lightweight wheels from the concept MH900e were replaced with Marchesini alloys, but to the same design. The frame was traditional Ducati trellis type, but little of it can be seen. This was one of Terblanche's design objectives with the MH900e - show off as much of the engine as possible from both sides of the motorcycle, hence the impression that the bodywork is almost perched, balance-beam style, atop the engine. Behind the half-fairing, the instrument cluster was simplicity in itself, comprising a single Veglia white-face analog tachometer, with digital speedo/clock underneath.

So, for all its funky styling and new-age, e-commerce marketing, what was the MH900e under the skin? Mechanically, the retro-styled machine was virtually the same as the then current 900 SS, using its 904cc Desmodromic single overhead cam v-twin, an engine that could also be found in Ducati's M900 Monster. The chunky sump on the MH900e is a design feature, intended to mimic the appearance of the original MHR. Performance between a 900 SS and the MH900e was comparable, but the restrictive exhaust system on the latter robbed a few horses from the desmodue engine. The six-speed transmission was also factory spec, lifted from the M900 Monster.

Being a rider himself, Terblanche designed the MH900E to not just look good, but perform good, too. That said, it was no cutting-edge sportsbike, and the high seat height was a challenge for many riders, but road tests of the MH900e when new generally came away surprised at how good the handling, steering and braking were. The low down grunt from the v-twin also came in for praise. Aside from the high seat height, the only common point of criticism seems to have been the indifferent "non-Ducati" exhaust note. With most expecting the concept-to-reality MH900e to be riddled with compromises, the bike's lack of serious flaws came as a pleasant surprise.

Today, the challenge with the MH900e is twofold. First problem is finding one. As most went into the hands of collector's from the outset, they rarely come up for sale. And when they do, it's more likely at big-dollar auctions, where cashed-up bidders are ready to pounce. Despite this, some MH900e's have been offered for private sale and tend to crop up sporadically through the usual print and online advertising options, although you won't find one going cheap. The second problem around buying and owning a bike like this is 'do you ride it?' Being a largely bespoke machine, the concern would be ever present about it being scratched, stolen, or worse - destroyed by cagers.

The other factor to consider with the MH900e is its investment potential. This one may take a while - or a Hollywood movie or two - to boom in popularity, but there will be a time when the modern MHR will be just as desirable as the original. Of course, the beauty of an investment like this is that it's also one you can take out and enjoy on a regular basis - if you're game! 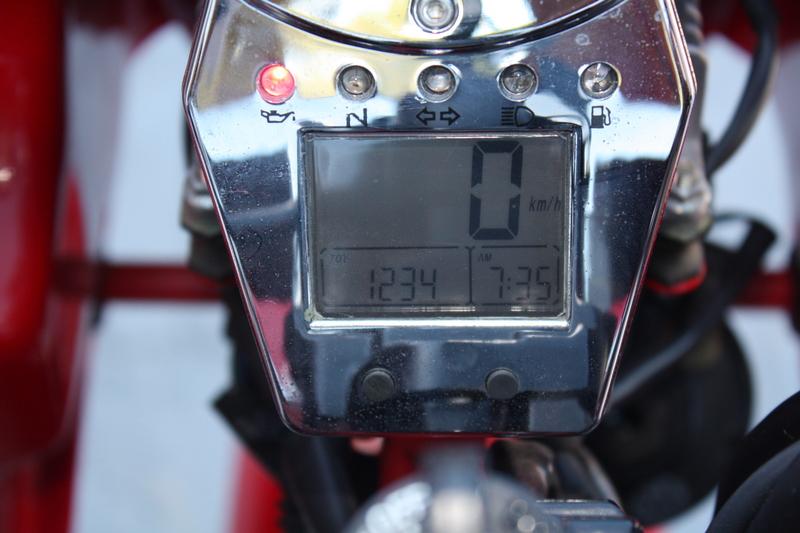 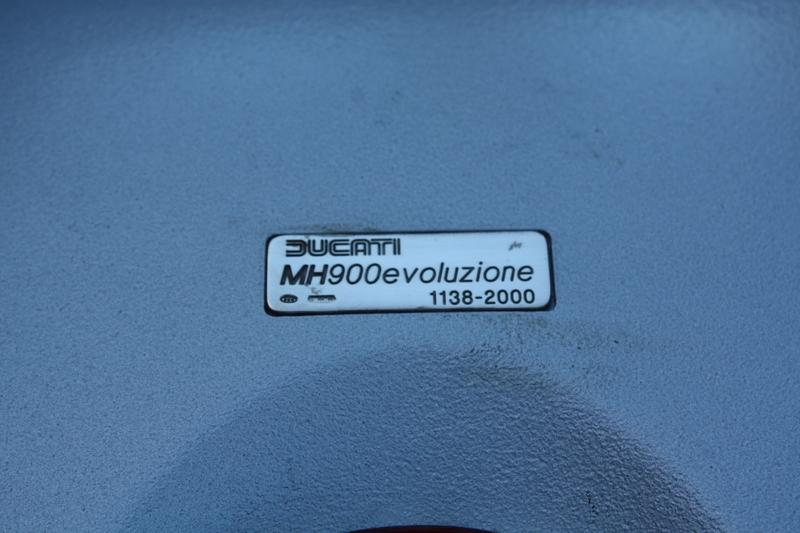 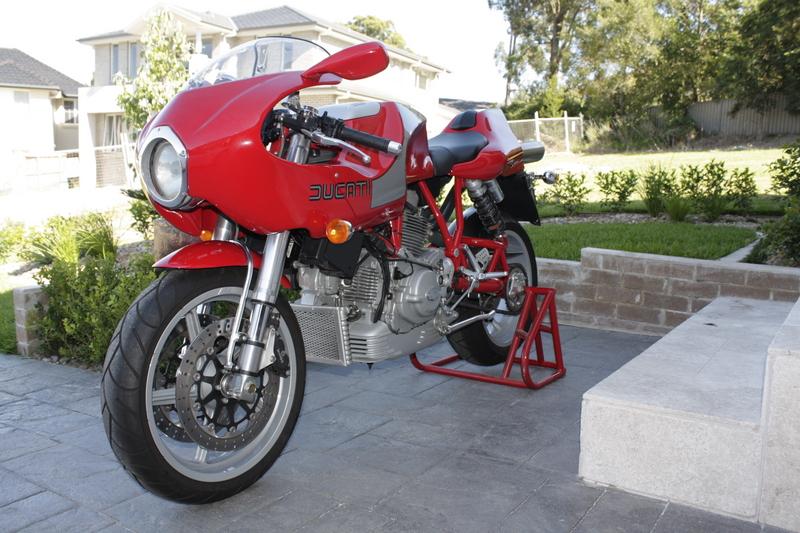