This ex-race Yamaha has been reimagined as a tribute to one of the greatest Yamaha racers of all time. 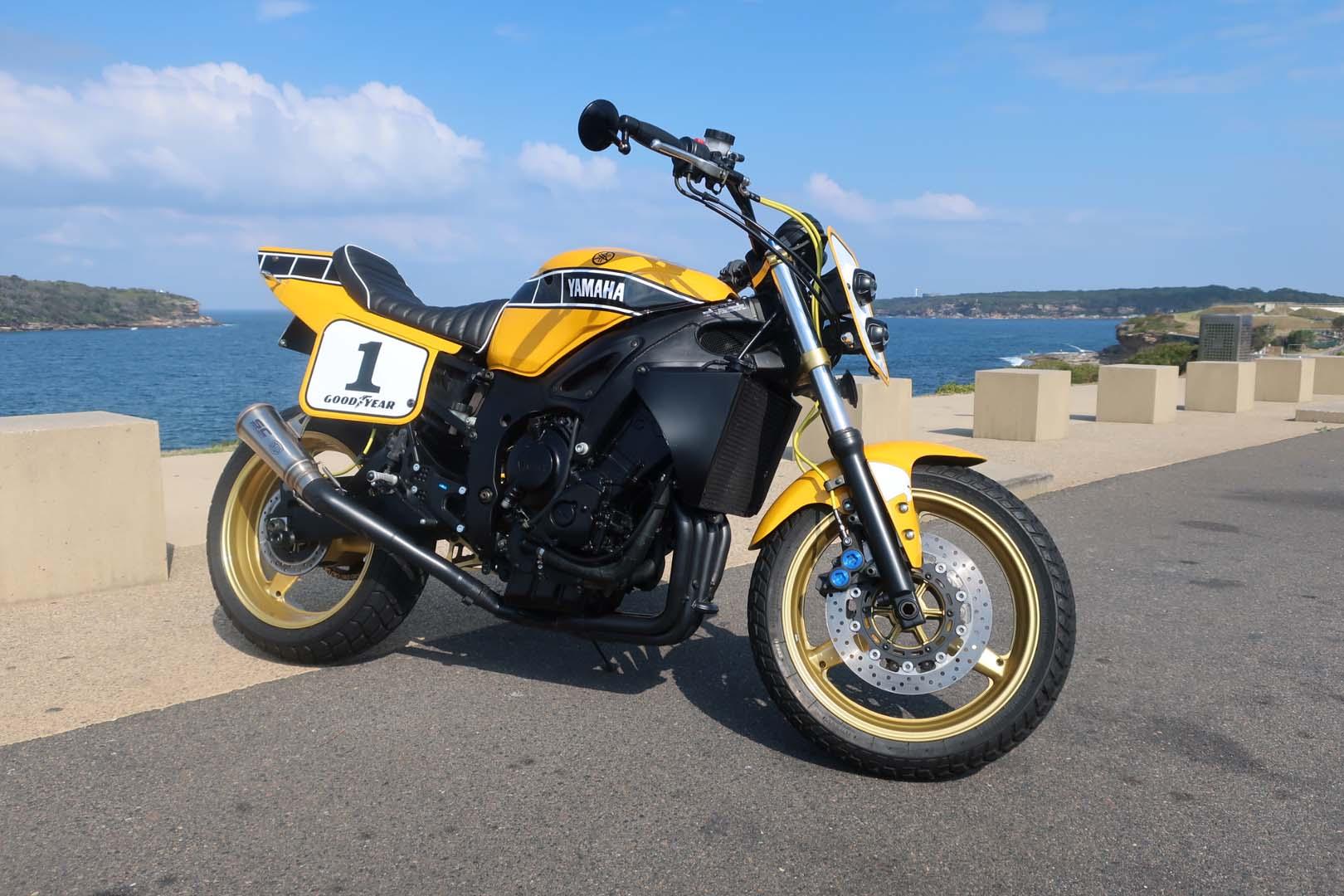 If you had to think of an American motorcycling hero, what name pops into your head? Evel Knievel is probably the default for a lot of people, but depending on your age and interests, there are plenty more, like Jay Springsteen, Kevin Schwantz, Jeremy McGrath, Freddie Spencer, Randy Mamola, Cal Rayborn, Rollie Free, Jeff Emig, Arlen Ness (RIP), Ricky Carmichael, Erik Buell, Eddie Lawson, ‘Cannonball’ Baker, Colin Edwards, Fred Merkel, James Stewart, Wayne Rainey, the late, great Nicky Hayden and, of course, William Harley and the Davidson brothers.

But, for some people. . . make that a LOT of people, there’s only one American motorcycling hero – Kenny Roberts. 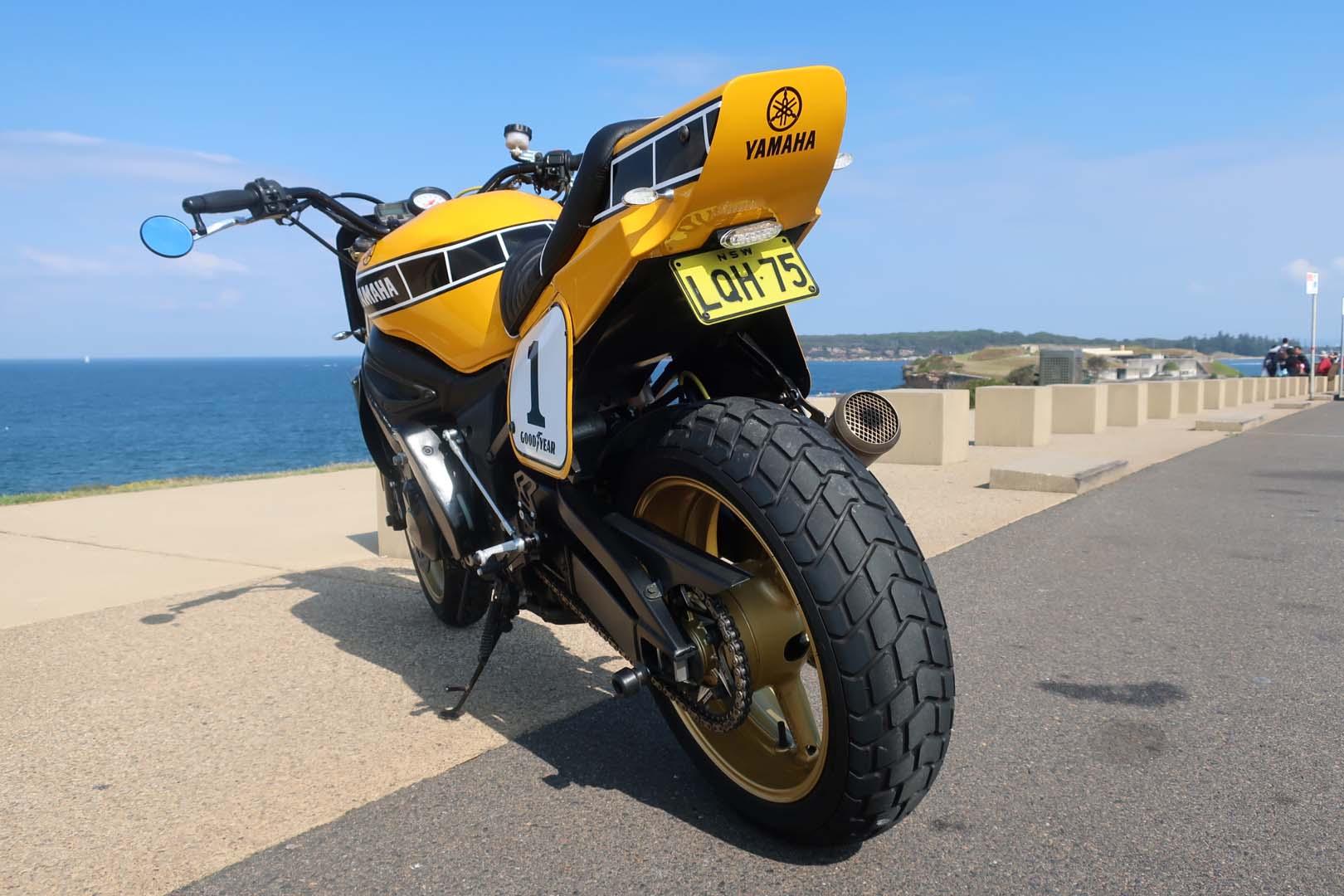 With three successive 500cc Grand Prix word titles from 1978, Roberts didn’t get the nickname of ‘King Kenny’ for nothing.

One of the small group of riders that first put America on the map of GP competition in the late 1970s, Roberts was also the first American to win a Grand Prix World Championship in road racing.

Like most of his US contemporaries, Roberts came to road racing from flat track competition, specifically the AMA Grand National Championship, transitioning skills built up on dirt tracks to road circuits and bamboozling the Europeans with a riding style they’d never seen before.

Roberts was also known for his advocacy for safety and a better deal for riders, challenging the sport’s governing body and accepted norms in the way that John McEnroe did in tennis - but with a rock-hard stoicism and none of the McEnroe-esque tantrums!

Arguably just as famous as Roberts the man is the livery of his race-winning Yamahas. The bright yellow with black-and-white ‘speedblock’ graphics has been copied thousands of times since and inspired the creation presented here. 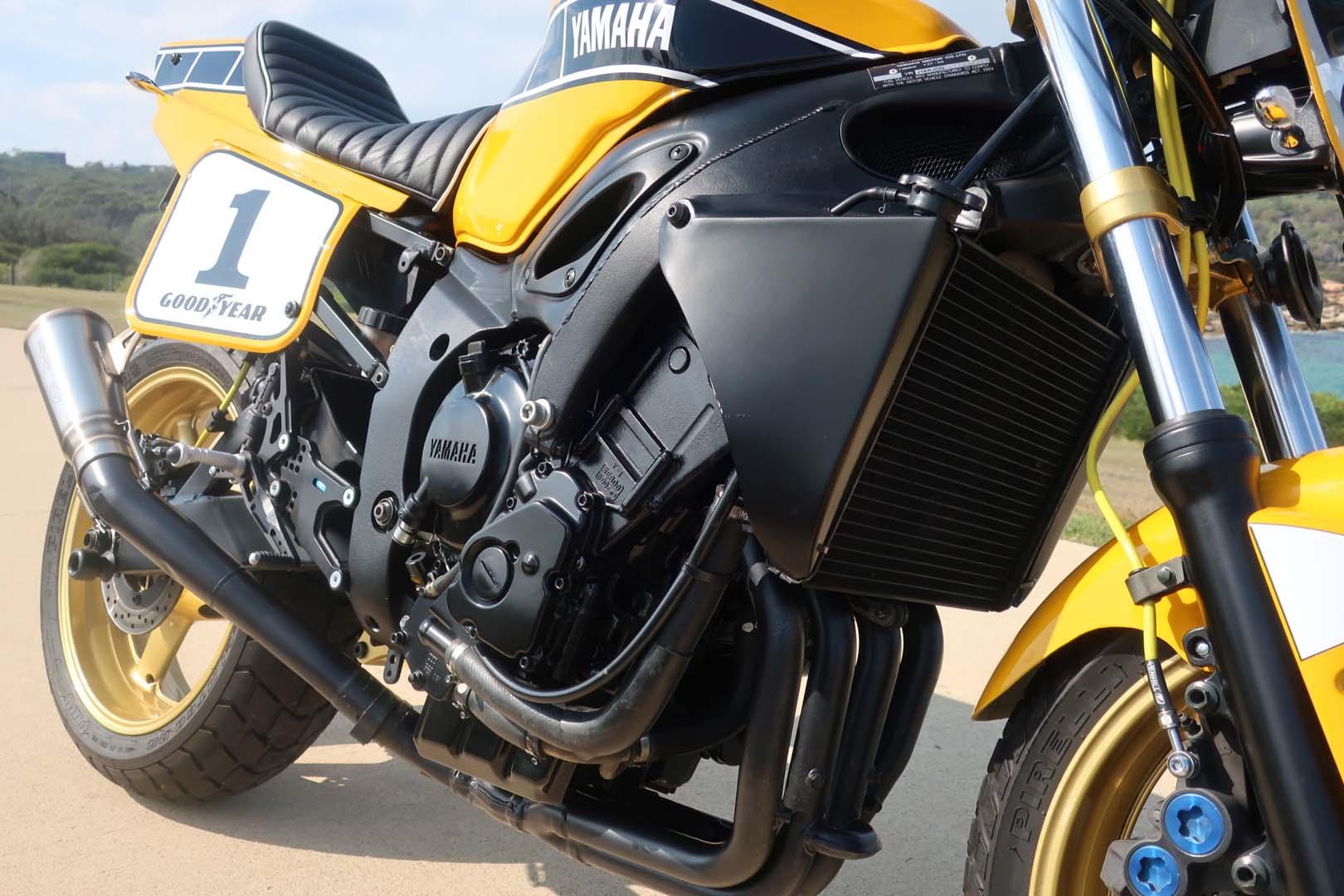 One of the many to be inspired by Kenny Roberts is Roger Westlake.

A serial bike buff, Roger has owned, ridden and restored numerous Ducatis, Triumphs, BSAs, Hondas, Royal Enfields and Yamahas over the years, with rarities like a Dresda Triton and Sunbeam S7 in his back catalogue, too.

Roger also loves a custom project, as evidenced by his Harley XR1200 café racer that featured in JUST BIKES back in 2011 (Issue #262). And while he’s always looking out for a new project, the one featured here came about almost by accident.

“I’d been reading an article about Kenny Roberts’s TZ Yamaha flat tracker - which I’ve always appreciated the look of – and decided that I wanted to create one of my own.

“Funnily enough, just after reading that article, a friend mentioned there was an old, damaged Yamaha R6 for sale.”

The R6 was a 1999 model that had started life as a streeter before being raced. Exactly how much racing the bike had done was unknown, but it was available and it was cheap, largely due the fact it had been crashed.

Seeing his desired Kenny Roberts tribute in the tired R6, Roger bought it and the project began. 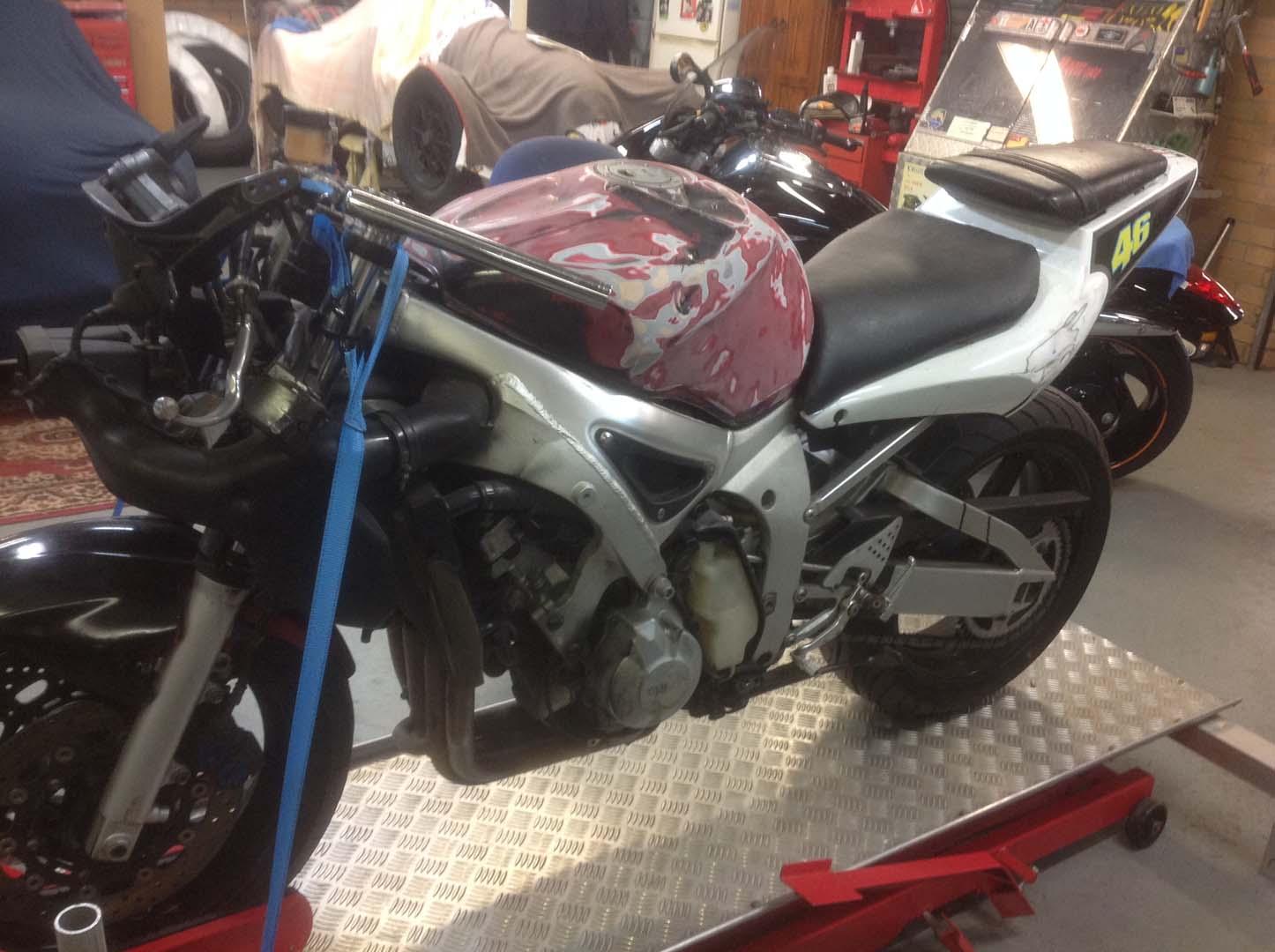 As it came into Roger’s hands in June of 2017, the R6 looked rough and closer inspection showed it to be even rougher than it looked!

“The bike was in very poor condition and required a LOT of repair - the fairing was damaged, the pegs were damaged, the tank had a massive dent in it… I don’t know how he ever raced it, to be honest,” Roger laughed.

After stripping the bike down, Roger called on the skills of Rodd Hoffman for bespoke fabrication work, while John Allman from Mototech Australia (in Smithfield, NSW) was tapped for the rebuild and painting.

“The first thing I did after tearing the bike down was check the condition of the frame for alignment and replaced the wheel bearings,” Roger explained.

Fortunately, the frame was straight, and surprisingly, the engine was in good nick, too. The only problems were leaking carbies, which were rectified with a good clean and new gasket kit.

“John said to me that the engine was really good – the best bit on the bike!”

As such, the engine internals were left untouched, but the intake tubes were cut back to the frame apertures and a better-quality air filter element added. On the exhaust, an ‘SC Project for Deus’ muffler was added to the factory headers. 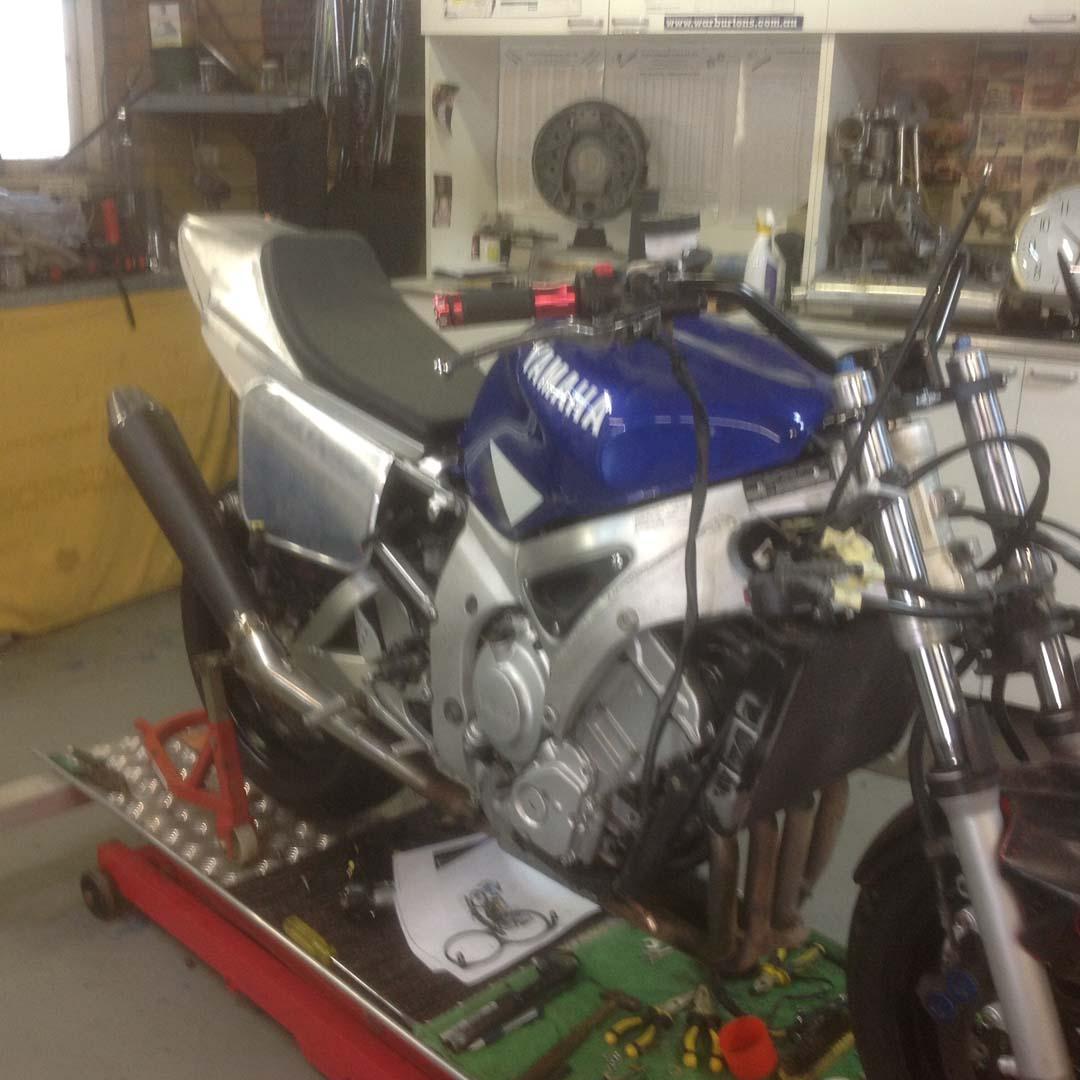 “It’s not offensive,” Roger explained of the nicer, deeper note delivered by this set-up. “It actually sounds more like a twin than a four when you’re at low revs.”

Like the engine, the R6’s gearbox was in good order and needed nothing, but new Vortex sprockets were added at both ends.

The same couldn’t be said for the suspension, though, which needed work, including new seals, new springs and rechromed staunchions at the front, but the rear only needed dialling down of the rock-hard compression for a mellower ride.

On the brakes, the discs were good, needing only fresh pads for the factory calipers, but Roger chose to upgrade the factory lines to new Venhill braided units.

The factory wheels, after those new bearings and work to repair race damage, were repainted, while the bike’s shabby tyres were replaced with a fresh set of Pirelli MT60 RS hoops for that flat tracker look.

With a straight frame, sweet-running engine and sorted suspension and brakes, all the essentials were complete, which meant the fun stuff could begin! 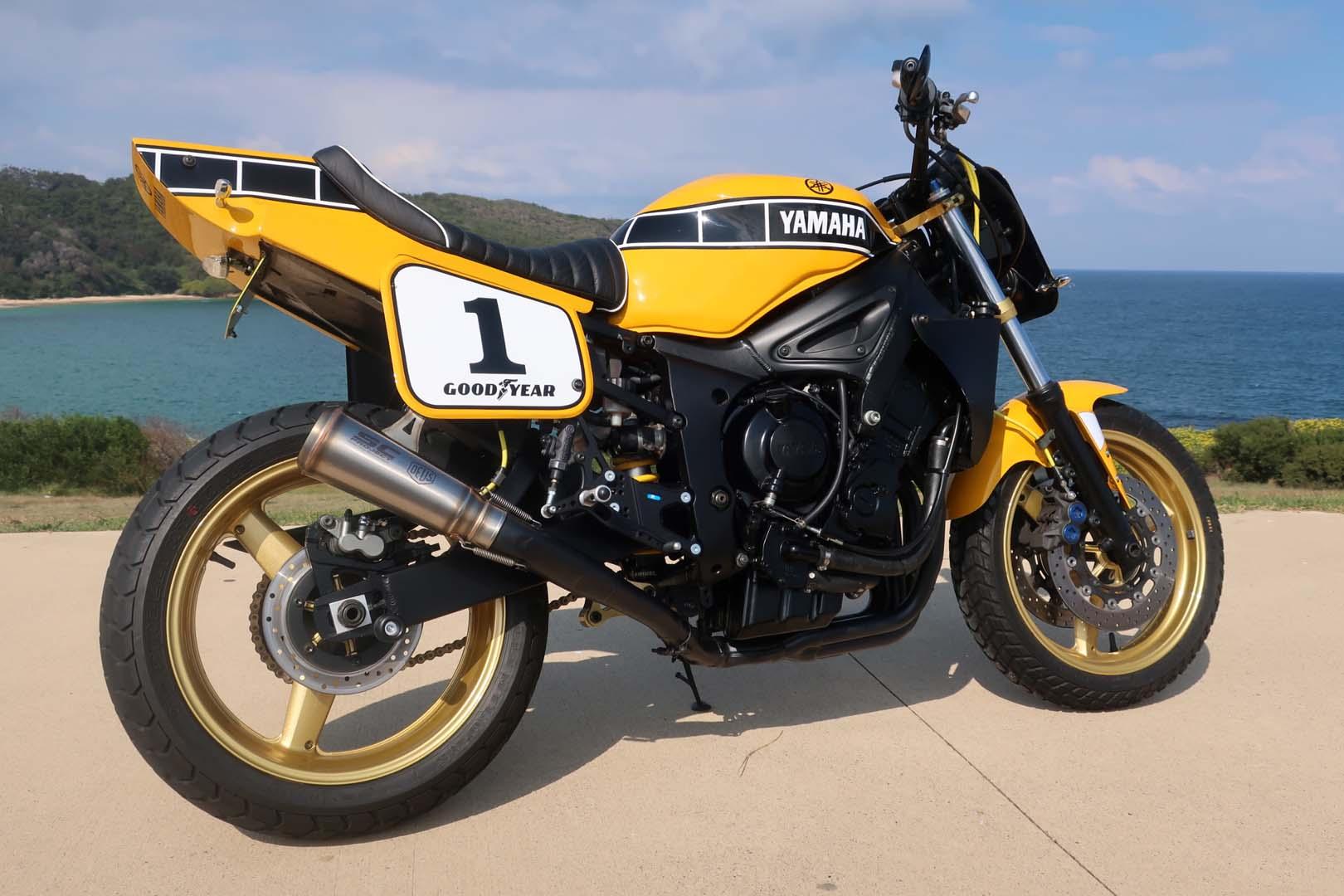 Stripped Down, Spiced Up

Being a tribute to Kenny Roberts’s flat tracker meant most of the R6’s sportsbike bodywork had to go. This was no great loss, given so much of it was damaged or in poor condition anyway.

Rodd Hoffman’s fabrication skills now came into play, with the headlight, seat and tail unit built by him to Roger’s instructions.

“The front headlight was fabricated out of an alloy race plate, fitted with a pair of custom LED spotlights,” Roger explained.

Rodd also made up a shroud for the radiator and the nearside coolant tank, with these painted black to blend in with the frame and keep the focus on the other Roberts-esque touches.

The fuel tank was replaced with another R6 unit, as the tank that came with the bike was deemed to costly to repair.

On the flanks, the alloy ‘race plate’ side panels continue the flat tracker theme, but it’s at the rear where you’ll find this bike’s most significant change.

The subframe is unaltered, but the seat base and tail unit from Redmax were extensively modified by Rodd, using sheet aluminium to essentially ‘encase’ the entire tail. 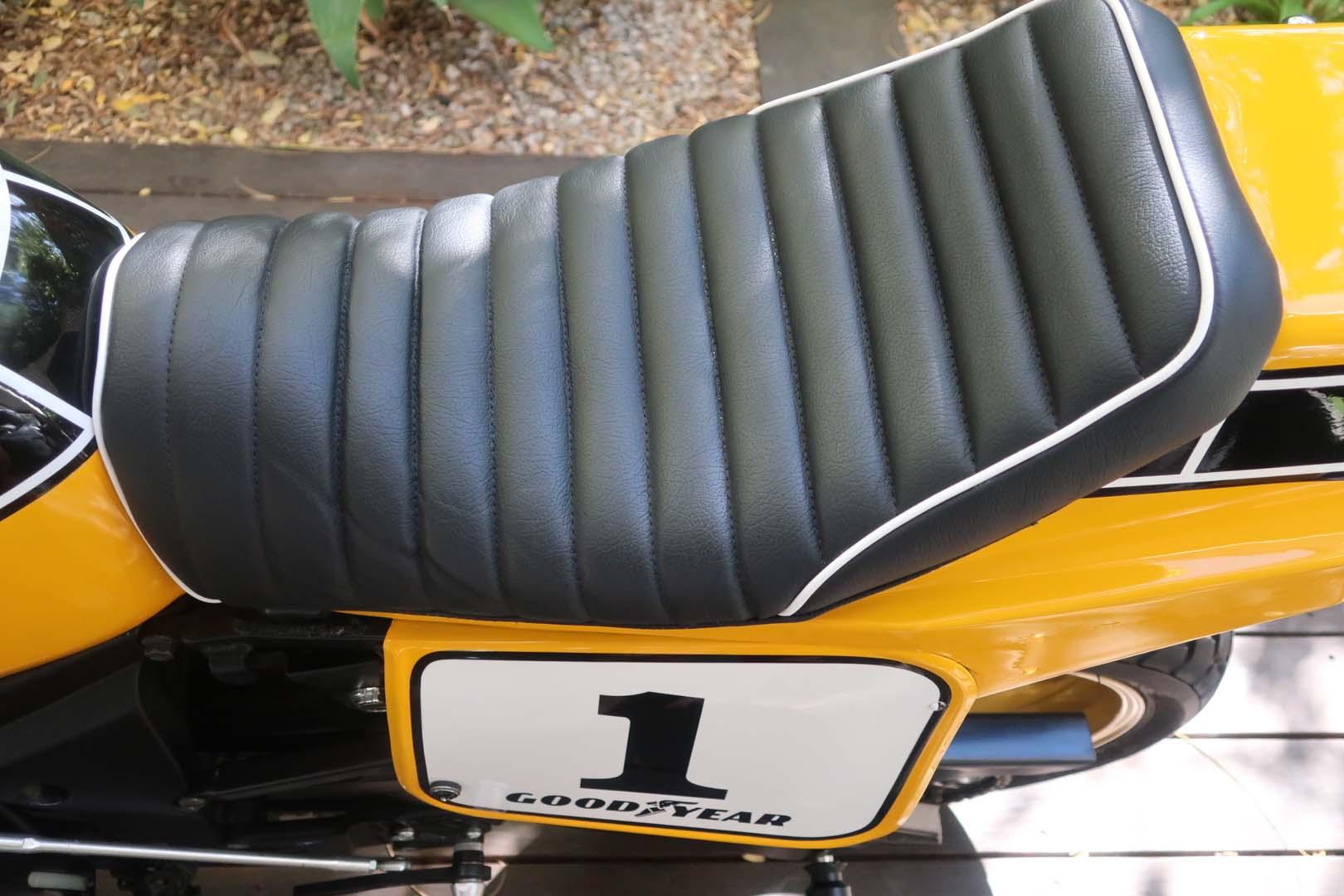 “This was probably the hardest part of the build for Rodd and took him a couple of weeks to get his head around,” Roger recalled.

A saddle to fit this custom tail was fabricated and trimmed in leather by Sydney Motor Trimmers, with old-school ribbing and contrast piping added.

A wide handlebar from PP Tuning (a brand that Mototech stocks) and compatible risers helped achieve the desired flat-tracker look, with old-school Triumph grips and Rizoma bar-end mirrors added. The factory Yamaha R6 instrument cluster - with its analogue tacho and digital everything else - was retained, and the switchgear is stock, too, but the ignition was relocated to the near side, below the seat.

If you’re thinking that top fork yoke looks different, you’re right – it’s an aftermarket unit from Redmax in the UK. The bottom yoke is factory, though, with both sprayed gold to continue the theme set with the wheels.

Rearset pegs and pedals came from PP Tuning, while other custom touches, like the levers, indicators and an aftermarket LED tail light were mostly sourced through Redmax. 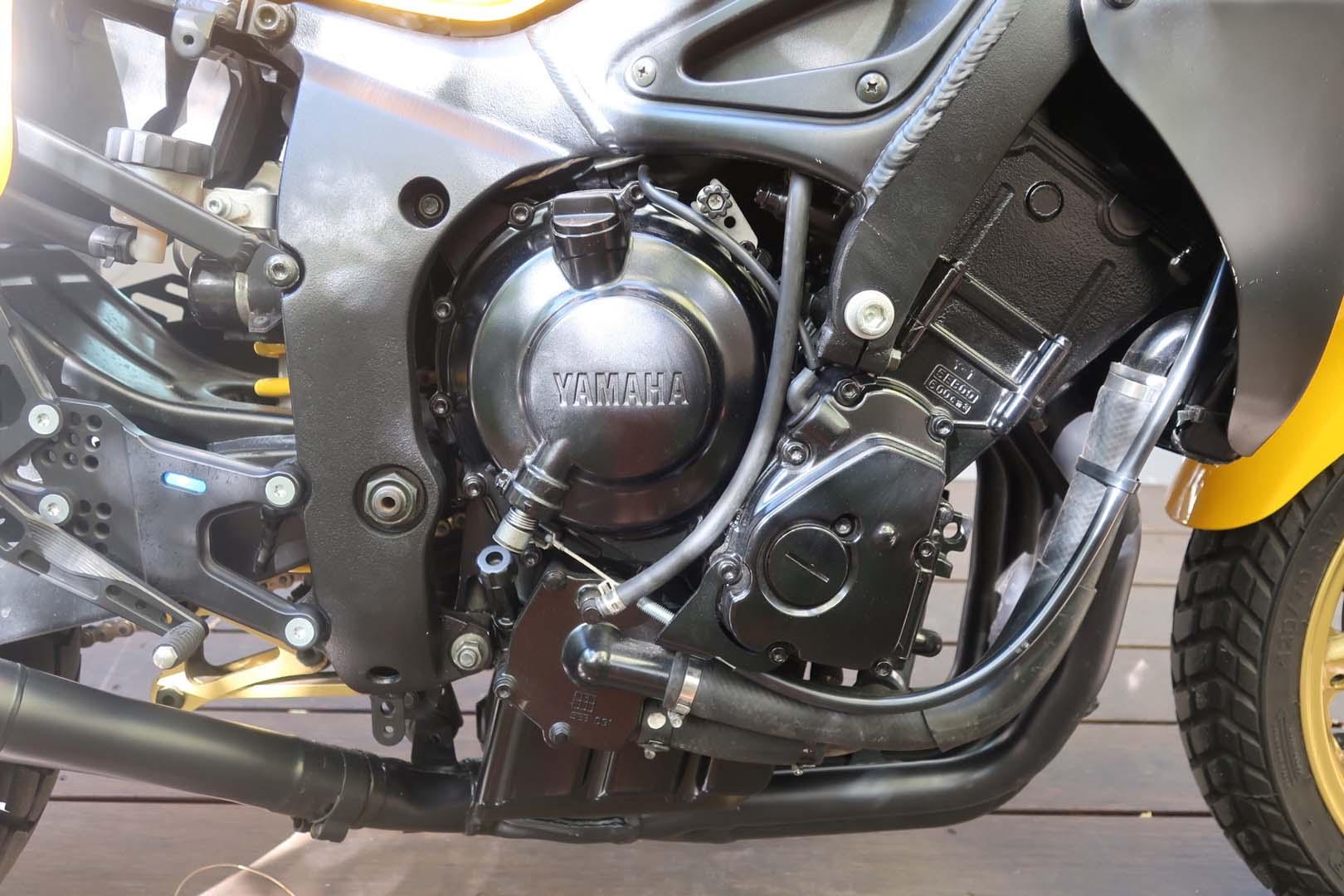 After Rodd’s fabrication work was completed, the R6 went back to John for painting, which is what gives this custom its greatest impact. The yellow is a standout, while the classic speedblock stripe has been effectively incorporated into both the original R6 parts and Rodd’s custom additions.

Completed in April, 2018, the Kenny Roberts influence and flat tracker look is as per Roger’s original vision, but there’s more than a touch of streetfighter style to be seen here, too, thanks to the abundance of aftermarket parts and that high-and-tight rear end.

That back end is Roger’s favourite part of this build: “The seat, the width of the tyre and just the overall look from the back is so ‘right’.

“The bike turned out better than I could have imagined. It’s one of my favourite builds.”

Every time he takes it out, including for the photos presented here, Roger says the bike draws attention and comment, invariably positive.

OK, it obviously looks good, but how does it ride?

“I’d never ridden an R6 before this one, so the tight steering lock took some getting used to, but it’s really comfortable, even with the rearsets. It’s very quick and light and those tyres are really great.

“The handling’s the highlight, though,” Roger exclaimed. “Compared to Triumphs and even a newer Moto Guzzi I’ve had, it’s all over those – and it’s an old Yamaha!” 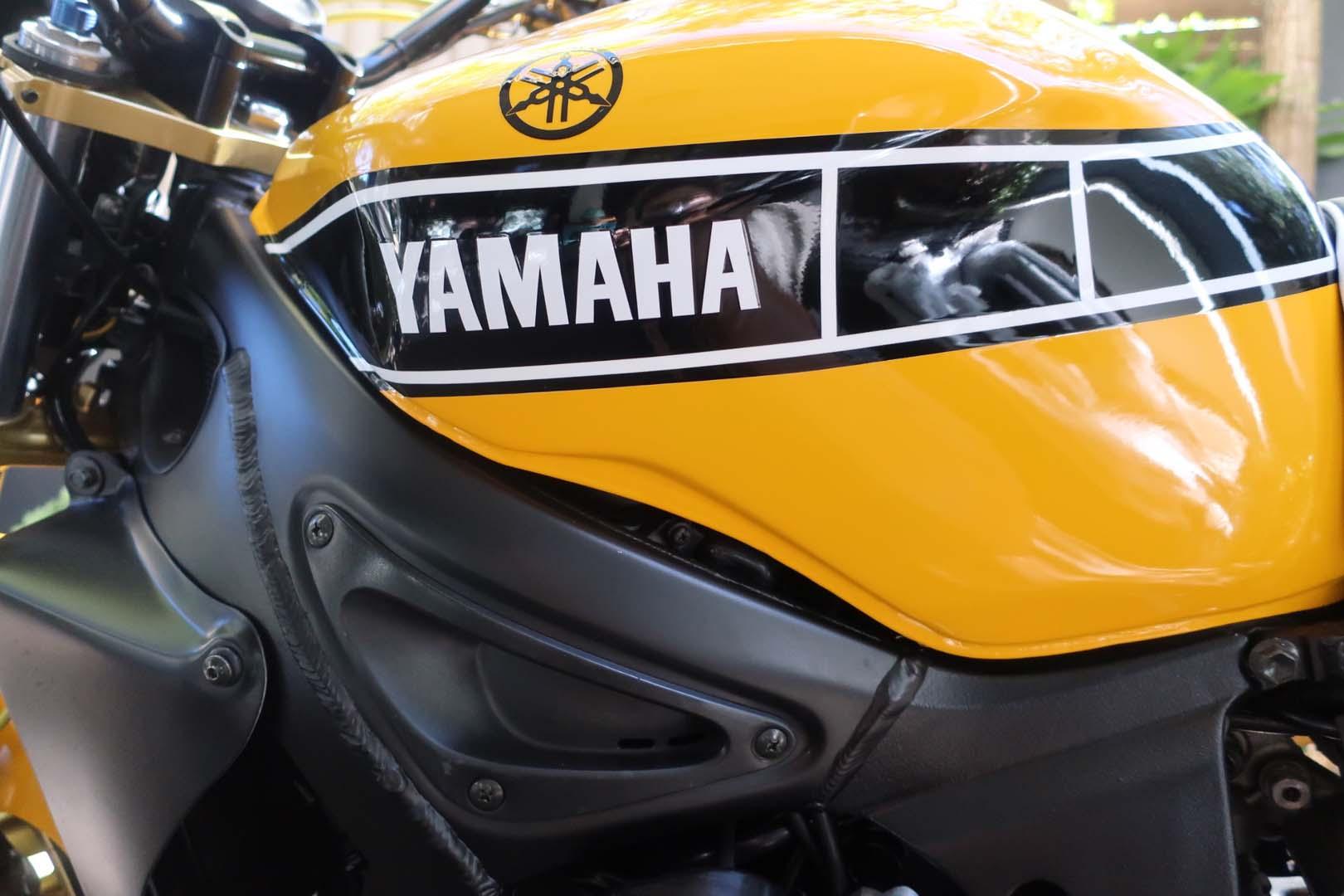 Shortly after completing this project, Roger started on his next one: a café racer conversion of a 1975 Moto Guzzi T3.

“John from Motociclo in St. Peters had acquired it and was going to do something with it himself, but got caught up in building a larger workshop, so said he’d like me to have it – but only if I did a good job of it!”

The big, transverse v-twin Guzzi is no stranger to café racer conversions, with several appearing in recent years. German builder KaffeeMaschine inspired Roger’s, which will feature a LeMans fairing, new wheels, a rare Dresda Triton seat and lots of alloy-look finishes, along with the usual café racer bits.

John and Rodd have helped out with elements of this project, but most of the build was being done by Deus out of their Camperdown workshop.

As this issue of JUST BIKES went to press, Roger’s Moto Guzzi project was approaching completion, so if you like what you see here, and also appreciated Roger’s Harley café racer, you’ll be keen to see what’s been done with that Guzzi. We’re looking forward to it, too!

Roger extended a special thanks to Rodd Hoffman for his fabrication work on this project, John Allman at Mototech Australia P/L (Smithfield, NSW) for rebuilding and painting, as well as Redmax (UK) for custom parts. 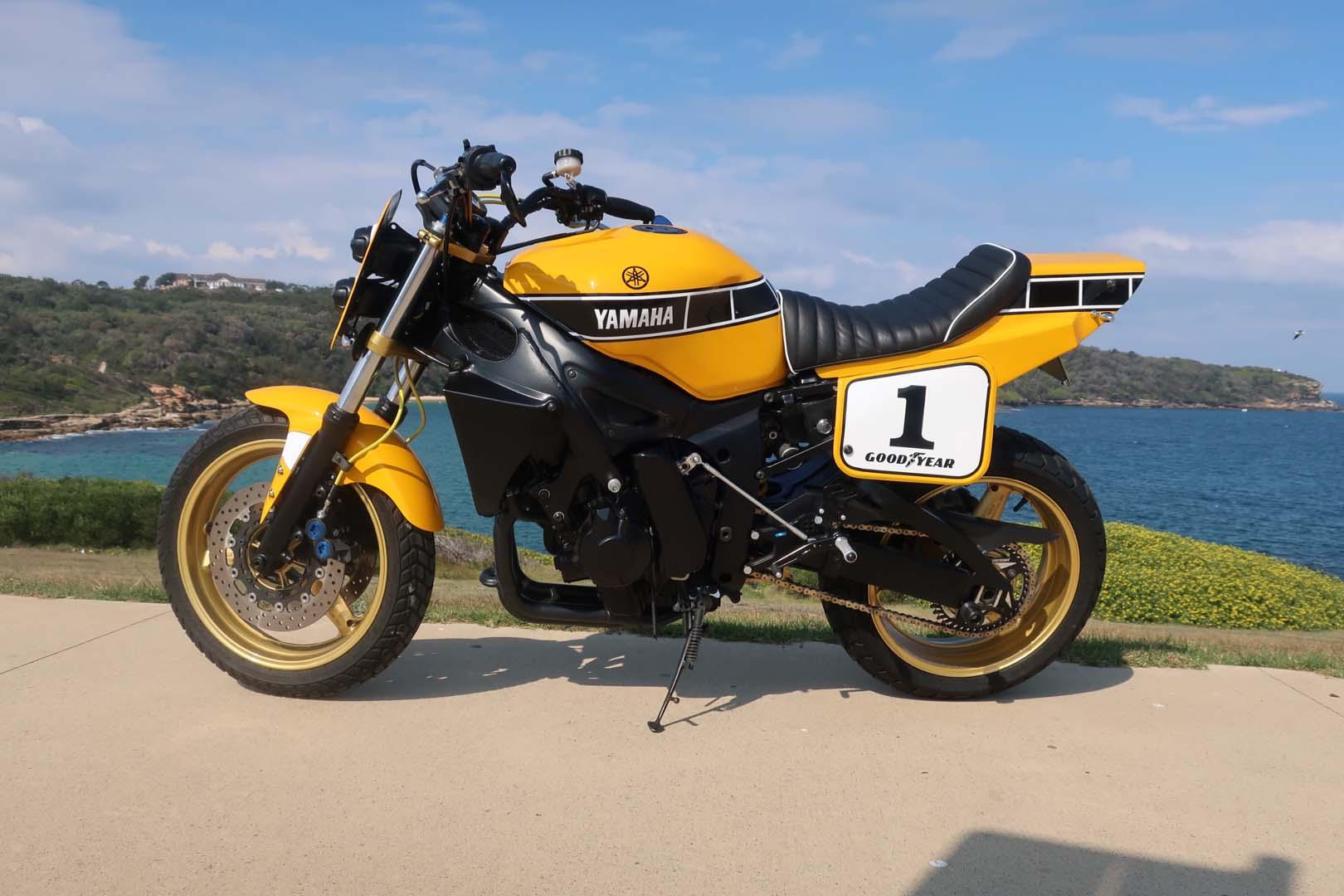