By the late 1980s, Moto Guzzi had already applied their distinctive transverse V-twin to just about everything from a sportsbike to a café racer, to a laid-back cruiser, so why not stick it in a Dual Sport bike as well?
It's a v-twin tourer, Jim, but not as we know it.

By the late 1980s, Moto Guzzi had already applied their distinctive transverse V-twin to just about everything from a sportsbike to a café racer, to a laid-back cruiser, so why not stick it in a Dual Sport bike as well?

That was the thinking, more or less, behind the creation of the 'Quota'. BMW's R1100 GS and Honda's Varadero had shown there was a market for a Dual Sports machine, so the Quota was created to offer a mix of good road handling with off-road capability - at least that was the plan when the Quota 1000 concept made its debut at the 1989 Milan Motorcycle Show. Moto Guzzi had previously had a crack at an off-road motorcycle with their V65 TT and NTX 650 & 750, but these weren't successful, being too heavy, with insufficient suspension and the curious retention of shaft drive - something virtually unheard of on a true off-road bike.

Turning the Quota (the name roughly translates to 'heights') from a show bike to a production machine proved easier said than done, requiring the adoption of new technologies and designs to make the concept work. By the time the actual production models reached dealers in 1992, the Quota had evolved into a dedicated road tourer. Not a tourer in the Goldwing/Electraglide mould, but a tourer nonetheless. The Quota's all-new chunky box section twin spar frame was a break with Moto Guzzi tradition, as was fuel injection and twin 280mm ventilated front disc brakes. The minimal bodywork, high & wide handlebars, long-travel Marzocchi front forks, 21" front wheel and small screen suggested off-road capability, but Moto Guzzi made it that clear the Quota was a tarmac-only machine. The sheer size of the Quota 1000 - 1620mm wheelbase and 258kg wet weight - would have made it "interesting" to take off road anyway, while the 880mm seat height was a challenge for all bar the tallest rider. Despite these flaws, the debut Quota performed well as a tarmac tourer. Easy to handle at low speeds, the power delivery from the 948cc V-twin was smooth, with lots of torque and predictable acceleration - thanks to the fuel injection - up to a top speed of 190+ kph. The Quota was also well balanced and easy to steer thanks to the wide handlebars, but the suspension was arguably too soft for a bike that was unlikely to ever spend time on rough dirt tracks.

Only produced in limited numbers, the Quota found an equally limited audience, mainly in Europe, before the first generation model ceased production in 1997. Immediately afterward, a new Quota debuted for the 1998 model year, the 1100 'ES'.

Engine size was upped to 1064cc for the new Quota, hence the 1100 moniker, but the same torque-heavy characteristics remained, increased to 8.7kg/m @ 3800rpm, compared to 8.1kg/m @ 6000rpm on the Quota 1000. 90 percent of the available torque was available between 2800 and 5800rpm, which meant the Quota 1100ES could pull away in just about any gear. The retuned engine also featured a new camshaft, a new Weber-Marelli fuel injection system and a more compact CPU. The 5-speed transmission and final drive was shared with Moto Guzzi's 1100 Sport road bike. Cosmetically, the Quota ES featured a redesigned headlight surround, plastics and graphics, but the biggest improvement was the reduction in seat height by 60mm - still tall, but a huge improvement over the old model!

Most other dimensions remained the same, although dry weight actually increased to a claimed 245kg. If that figure is accurate, it's hard to see where the extra kilos went! Front suspension travel was reduced and a new adjustable shock was fitted to the rear, making the 1100 ES more docile on the road and less inclined to 'pogo' on acceleration. Top speed was again claimed to be in the low 190kph mark, although most Quota riders would be unlikely to put that to the test. Front brake discs were increased in diameter to 296mm, with Brembo 2 spot calipers. With the ES's optional panniers and topbox fully loaded with gear, the extra braking power was welcome. The 20 litre tank is a carryover from the 1000, which, depending on the load and the road, should get about 300km out of a full tank. The factory-fitted Pirellis are still very much road tyres, but even with these, the ES will handle gravel and hard-packed dirt roads without too many dramas.

In this specification, the Quota 1100 ES remained largely unchanged until its demise in 2001. Since then, the Dual Sport mantle has since been taken by the Norge and Stelvio. With a raft of second hand dual purpose machines available nowadays, the Quota presents as a good 'left field' choice, but to be honest, it's one that's more likely to draw past and current Guzzi riders than first timers to the distinctive V-twins from Mandello. 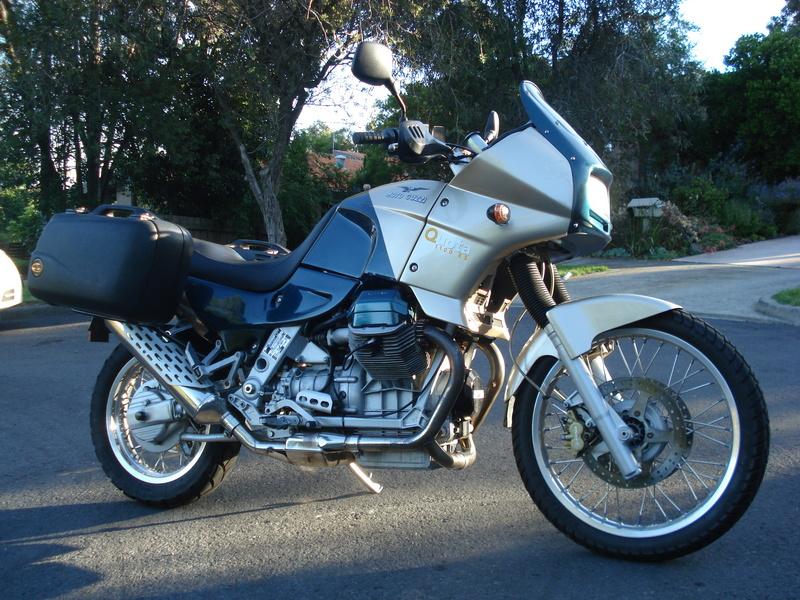 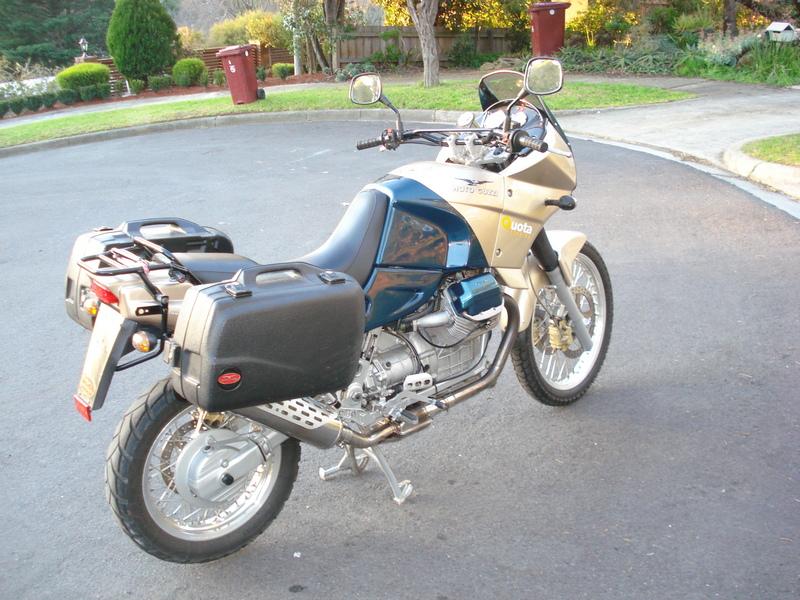 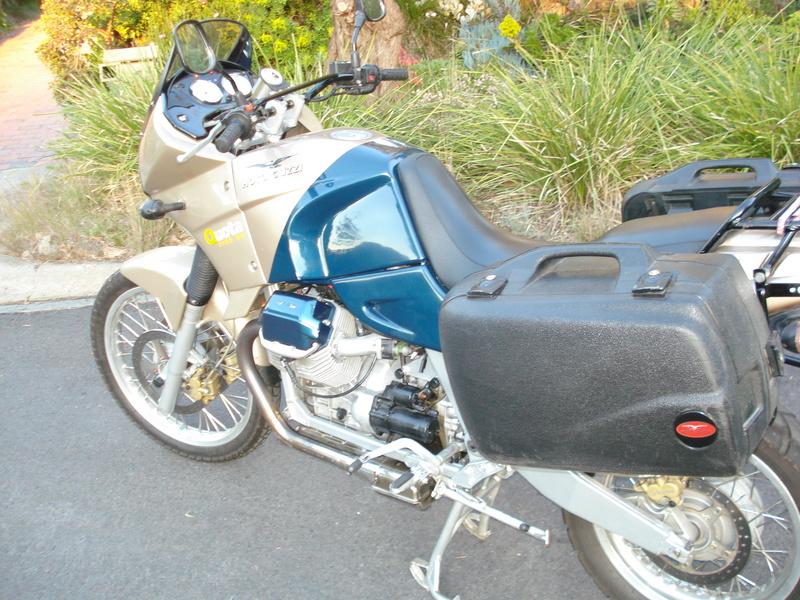 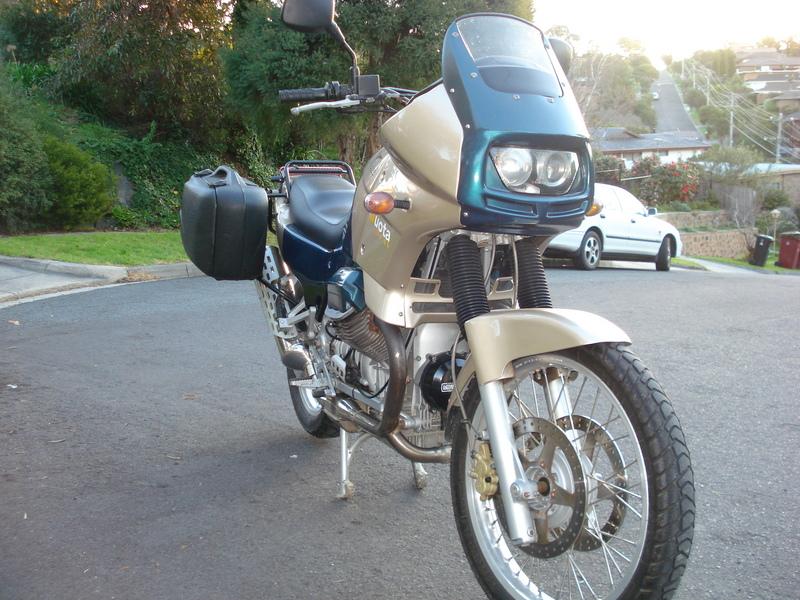 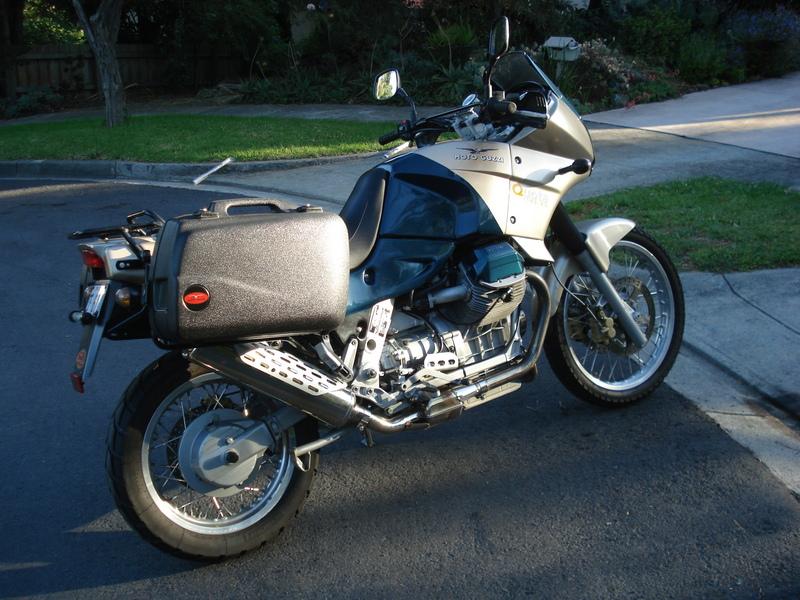 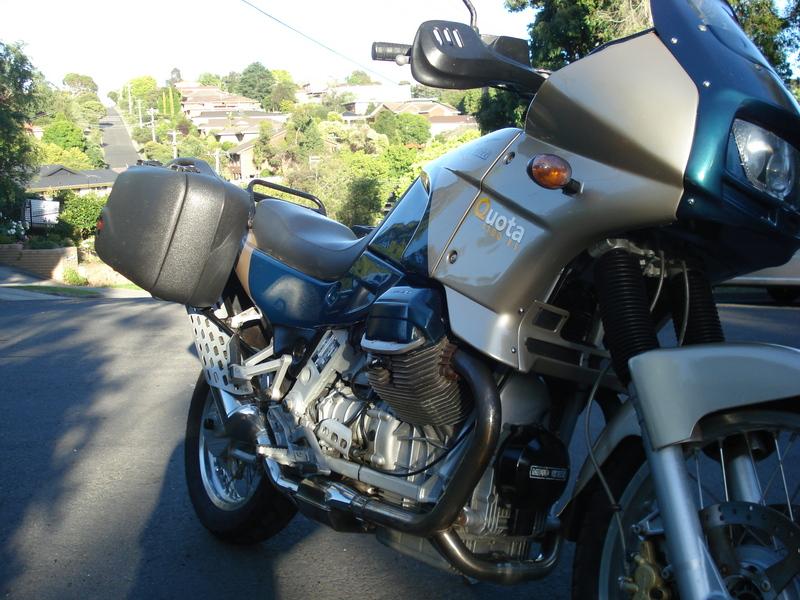