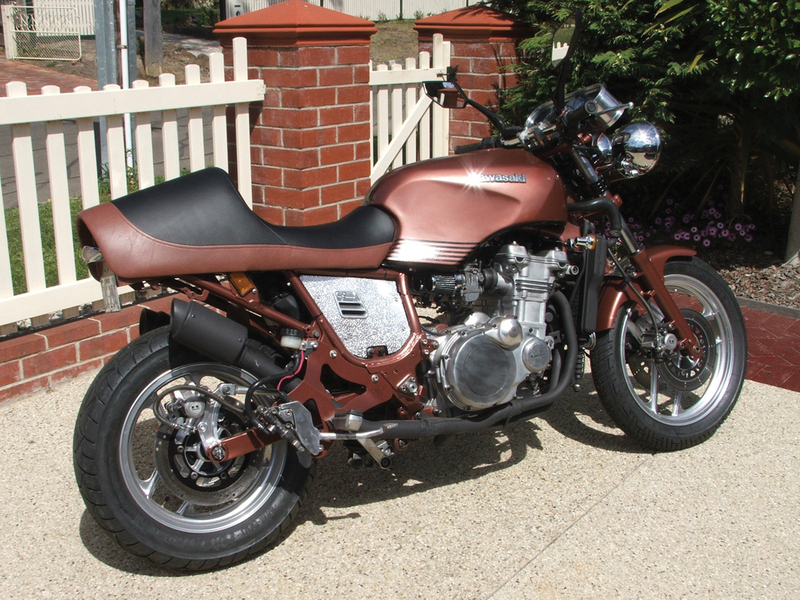 Roy Luck is no stranger to bike restorations, having previously applied his skills to a number of classic Hondas, Yamahas and Kawasakis from the 1970s and 80s. While most of these have been stock restos, Roy has chosen a different path with this recent project, a GTR 1000-based streetfighter.

Roy is nothing if not prodigious, with the GTR representing his tenth project in a little over three years. As Roy described it, he was looking for something different after a string of nine back-to-stock restos, so a solid, but sad 1986 Kawasaki GTR1000 fitted the bill. The shaft-drive tourer may seem an odd choice, but under its panniers and full touring fairing, the GTR1000 (which was actually introduced in 1986), used the same basic engine as the GPZ1000RX sportsbike. AS purchased, the GTR had definitely seen better days, having been dropped and damaged, but Roy saw potential - and a challenge - in it.

"The previous owner had let the rear tyre get slick and dropped it on a right hander," Roy said of the damage. "It lost its pegs and sustained damage to the fairing, screen and just about every other panel," Roy said.

"I removed all the plastic and set about making mild steel brackets for the rear set pegs and adapting the four-into-two headers, pipes & mufflers."

Fortunately, the nature of the crash meant one good muffler remained, so Roy made two good cans, albeit shortened, out of one and re-packed them, finishing them off with VHT matt black paint. The rearset brackets were made from 6mm mild steel, cut to shape - by hand - and worked to fit over the exhaust pipes. The gear shift was reversed and extended, while the rear brake lever assembly was also adapted for the new peg position. As you can see from the pics, the rearsets were well aft of their normal position, which fitted the streetfighter styler and riding position Roy was after.

"Having made sure the new configuration worked, I put the valves in spec', adjusted the cam chain, then checked the compression," Roy explained. "(There was) not too much variation, considering how long the bike had sat."

Next job was pulling apart the carby rack. As Roy was planning to fit pod filters, the factory airbox was surplus to requirements, so that was donated to a needy member of the GTR Forum. Following a surgical clean and bench sync of the carbs, Roy bored out the main jets three sizes larger, and the pilots one size over stock. Replacing the rack, Roy hooked up a temporary fuel tank and fired up the engine to assess the impact of his upgrades.

"I then carried out a running sync', using a clear tube, home-made, manometer, balancing one with two, then three with four & finally two with three," Roy said.

With the engine running sweet, the focus turned back to fabrication, this time at the front end. Bending and welding 20mm x 3mm flat bar steel, Roy made a custom bracket for the twin headlights - a classic streetfighter touch. The pod for the gauges was also all Roy's own work, fabricated from aluminium and shaped to hold the speedo, tacho and the temp and fuel gauges, something not all that common on 'fighter customs. The gauge housing has a bit of a 'retro' feel to it, but it really suits the overall look of this creation. The pressed aluminium sheet used for the base also picks up on the same treatment used for the sidecovers.

Speaking of classic streetfighter touches, bobbing the rear end is one of the signature touches on these bikes, and Roy treated the arse end of his GTR to some industrial strength liposuction.

"I chopped the back of the frame about in line with the back of the final drive," Roy said. "(Then I) removed the rear fender, battery carrier and electrics, and made the stumpy rear mudguard from 1mm galvanized sheet, welding tabs onto the swingarm to bolt it to, with four 6mm bolts.
"I also welded threaded lugs to the frame, for fixing the aluminium side panels, these were formed from pressed aluminium sheet, and used the louvered vents off the original fairing as a feature."

Also at the rear, the combination brake/taillight/indicators/numberplate bracket was scratch built in aluminium, and cut in a half-moon shape to nestle under the seat hump, then bolted to the frame. The seat pan was cut and the front section retained, while the 'hump' was built up from plywood, with the seat-locking mechanism adapted to fit. The seat trimming was one of the few parts of this build Roy didn't do himself, sending it out to a local auto trimmer for foam padding & covering. At the front, the factory front guard was altered, with all the valancing and most of the overall length removed.

With the frame and bracketing sorted, Roy then turned his attention back the engine. The carbs had already been tested, so it was time for Roy to use his proven method for getting the rest of the GTR's big 997cc DOHC transverse four ready for action.

"My favoured method is to remove one part at a time, strip it down, clean it, repair where necessary, fit new parts, repaint & pack away for later assembly," Roy explained. "When just the mill was left, I plugged every orifice with either wood plugs, rags, or in the case of the alternator & starter motor positions, aluminium blanking plates sealed with clear silicone. I then took the mill to be soda blasted, to remove all the old paint, lacquer & grime, pressure washing away the residual medium when I got it back."

The paint is an obvious talking point on this build, and an unusual choice for any bike, let alone a streetfighter. Roy described it as a metallic copper, which was a stock shade that caught his eye when he spotted the swatch at an auto paint shop. After overhauling the generator and starter motor, these units were the first to receive the metallic copper paint, followed by the frame and swingarm. The front guard, triple trees and bottom of the front forks also got the copper treatment, but the original plan to fit a set of clip-on bars was changed, as Roy explained.

"The front forks were dismantled, the old seals removed and new ones fitted. The steering head races were in good condition, with no detents, so I torqued the triple trees, fitting the clip-on clamps to the fork tubes. I subsequently found the clip-on bars not to my liking, so I manufactured risers & fitted drag bars."

With the steering sorted and motor in place, the drive shaft was hooked up and the whole thing set up on blocks, ready to accept the wheels.

"The old tyres were bonded to the rims through age & had to be cut off!," Roy said. "I cleaned the wheels & re-painted with a good quality chrome paint. I then fitted new Metzeler tyres, sizes as stock."

Somewhat surprisingly, considering the level of neglect the GTR had been subject to, the fuel tank was in good condition. Roy credits this to it being sealed internally at some point in the past. The vacuum pet cock also worked well, so the tank was just cleaned up and painted using the same metallic copper acrylic to match the frame. The rear mono-shock was overhauled and re-fitted, and the centre stand removed, but kept for maintenance work.

"It can be temporarily fitted, with the use of two pins, if you need to work on the bike safely," Roy said.
New custom mirrors and indicators were fitted at the front, with the latter subtly positioned off the frame. At the same time these were wired up, the TCI & fuse board were repositioned to either side of the battery carrier for the new battery.

With the project moving into the home stretch, there were only a few little jobs left to do, like fresh brake pads all round, and overhauling the hydraulics, including the clutch. But as with a lot of projects, there was a hurdle within sight of the finish line, but fortunately, it was an easy one to overcome.

"I fitted a new speedo cable, but when testing the bike, found the meter had the most horrendous whine. But just a drop of lube stopped that."

The finished result, from nose to tail, is a hell of a lot different from a stock GTR1000, but overall, the design works well. With all the fairing and frame components removed, it begs the obvious question of how much lighter it is. Roy estimates the stock GTR1000 had a kerb weight of 650 lbs (about 295kgs), and although he hasn't put it over the scales, he's confident it's shed a fair bit of that factory beef.

Roy described his very individual GTR1000 as a joy to ride and the overall project - choosing a less-than-obvious subject for a streetfighter treatment - as being a lot of fun. However, as you probably gathered from the opener to this article, Roy's a bit of a restless soul when it comes to projects. The next project, an '81 Yamaha XS 1100, was already in Roy's shed when he put the streetfighter on the market with JUST BIKES in late 2011.

In January, the copper streetfighter sold, so the focus has now turned to the Yamaha, which Roy purchased in what he intriguingly described as 'flat pack' form. If the Kwaka 'fighter is any indication, we can't wait to see the outcome of the Yamaha project! 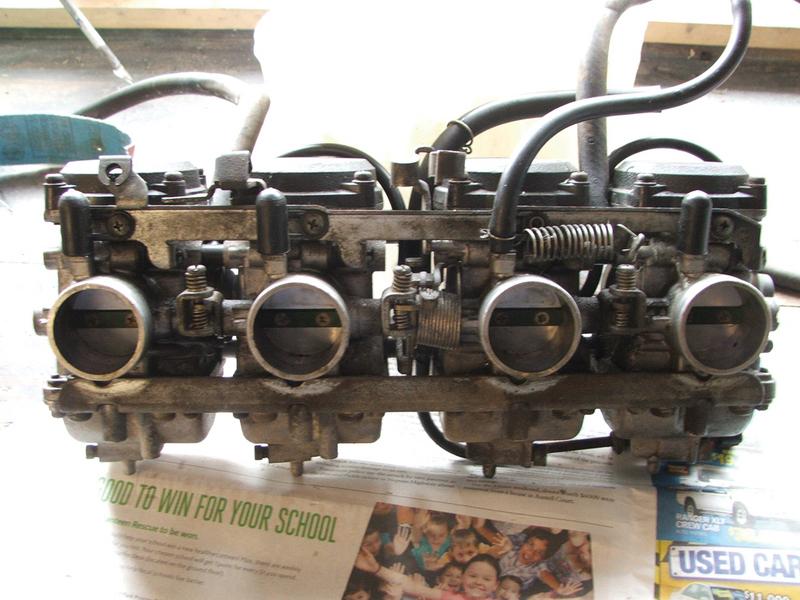 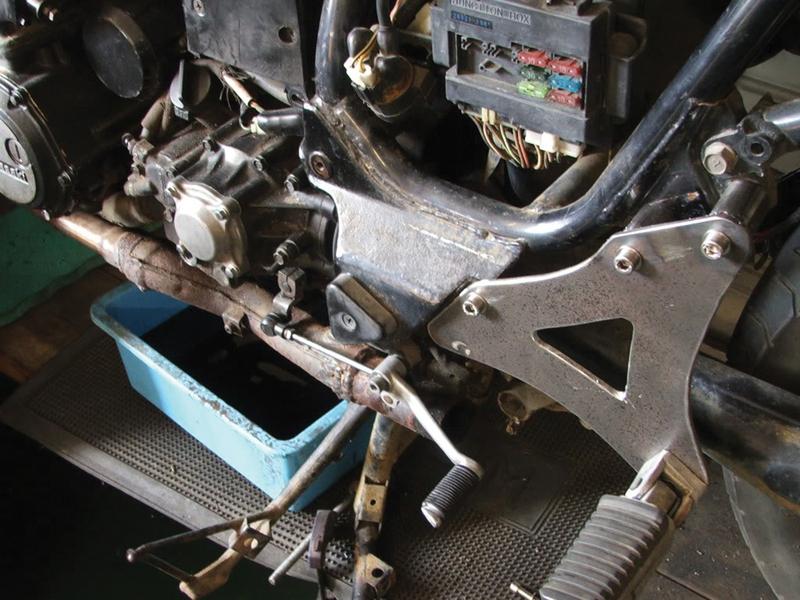 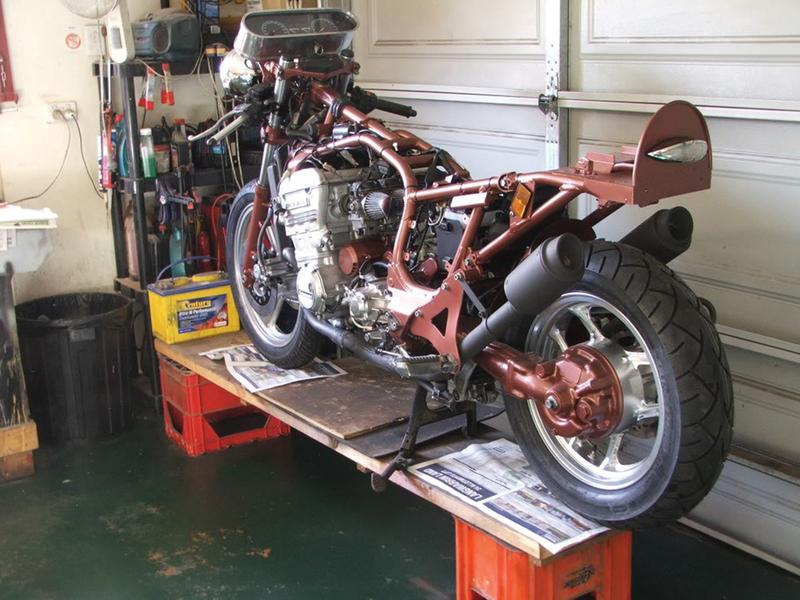 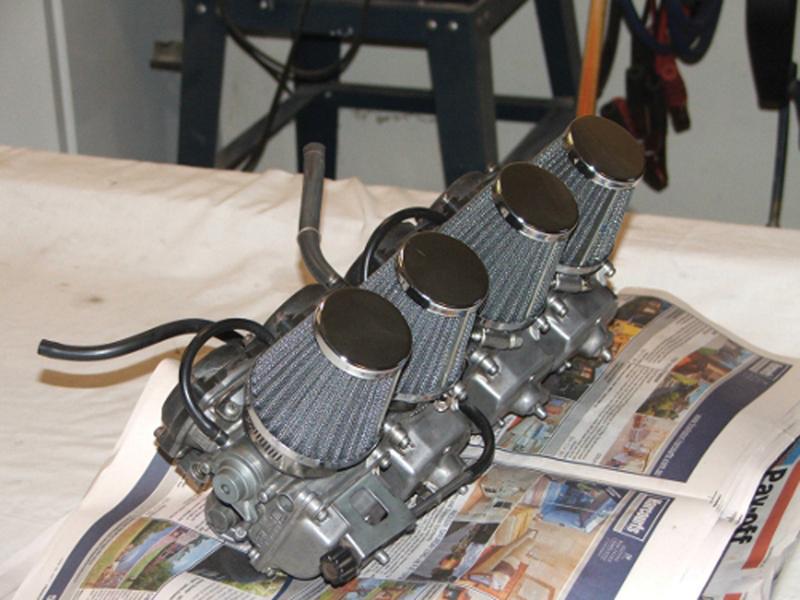 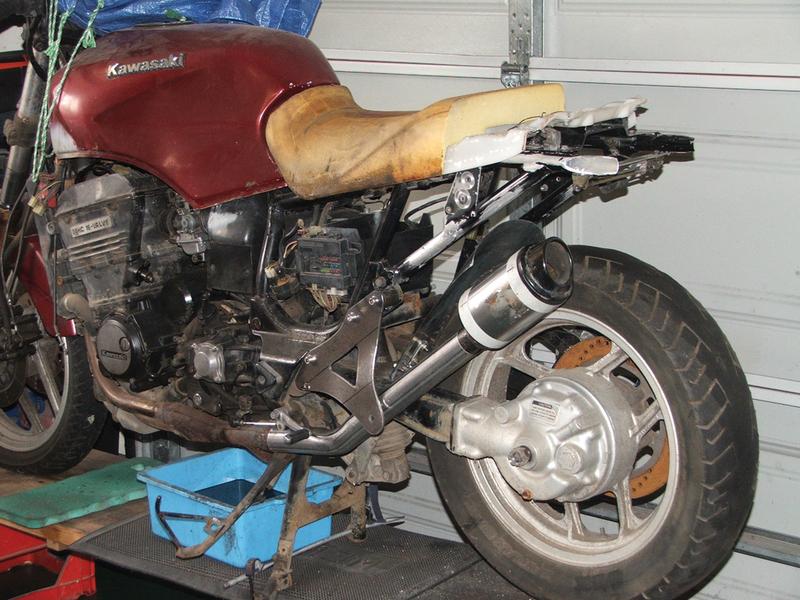 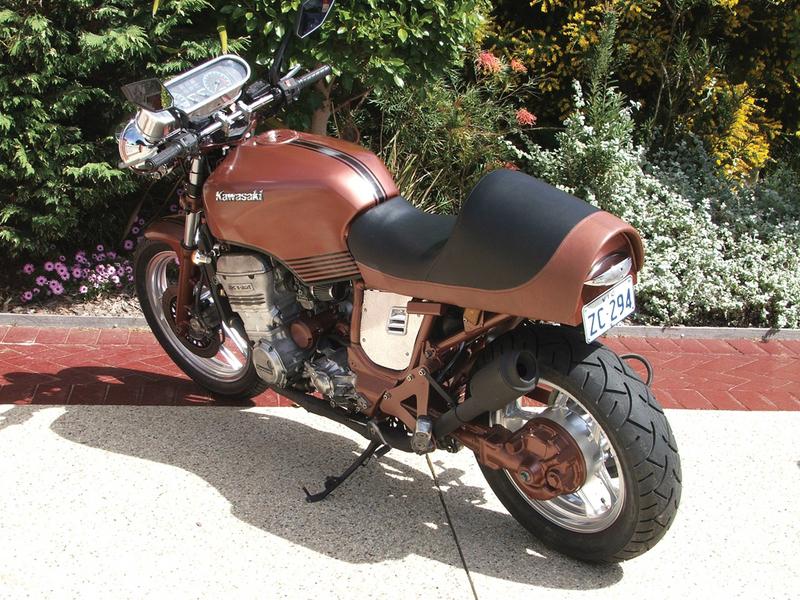 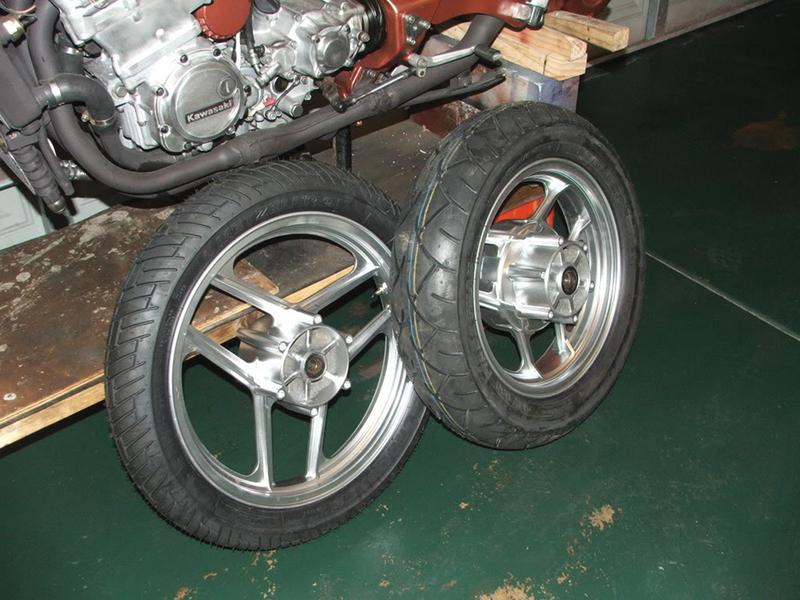 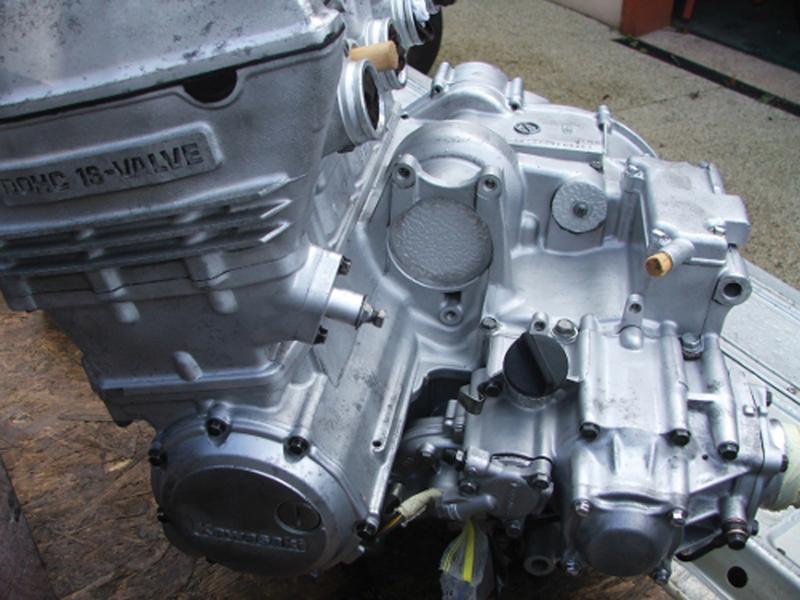 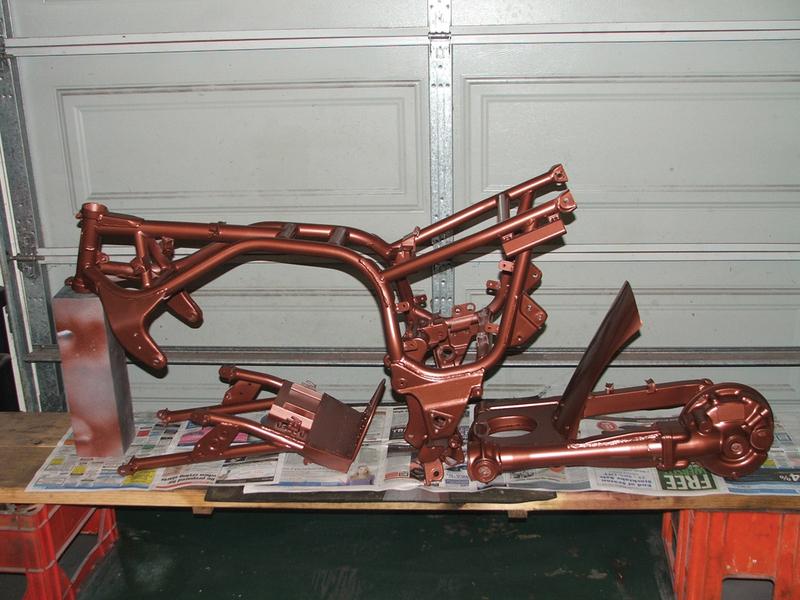