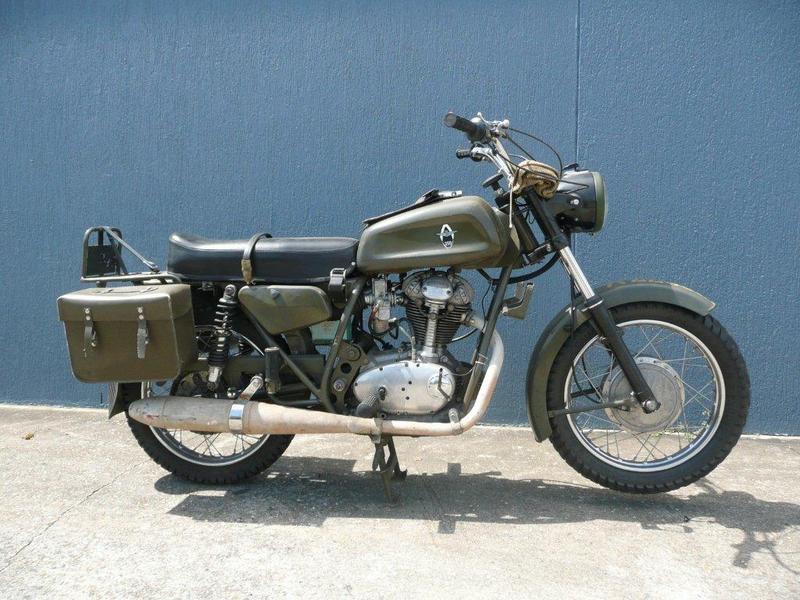 Now, before you start thinking that a corkscrew, wire cutters and thing for picking stone's out of horse's hooves folds out of this bike, it's not THAT sort of machine! But it is versatile.

If you've never heard of Condor, you're not alone. Along with Motosacoche and Universal, Condor was one of Switzerland's most prodigious motorcycle manufacturers, but precious few examples went beyond the Swiss border. According to A350 owner and enthusiast, Ben Van Helden (who runs an excellent website - www.benvanhelden.nl - showcasing these bikes. Note: information on this site is subject to copyright), Condors were usually twice as expensive as an equivalent German or British-built model when new, so they struggled to find customers outside their native Switzerland.

Like most pioneer motorcycle manufacturers, Condor started out making bicycles, but where this company is unique - at least amongst European manufacturers - is that the bulk of their output was produced for the Swiss Army and police force. Military contracts not only kept Condor afloat (Swiss army requirements insisted the motorcycle be domestically produced), but also served as a good testbed for the development of civilian models.

By the late 1950s, the role of the big, heavy motorcycle and sidecar outfit had been replaced by the Jeep, with the motorcycle's role switched to that of a patrol or fast reconnaissance machine. The Swiss army followed this trend, requesting a smaller, lighter and more manoeuvrable machine to replace their Condor-built A580 shaft-drive boxer twins. Condor's A250 4-stroke single was the result, which initially used outsourced engines built by Maserati before a similar-spec, Condor-built motor was produced.

The A250 fulfilled requirements for a decade before the Army came calling on Condor again at the end of the 1960s. They liked the A250 design, but wanted more power. The quantities required under this contract made the development of an all-new engine impractical, so Condor chose to source engines from Ducati, who already had a 340cc single in production. One would imagine that this was outside the 'domestic-only' terms of the contract, but as with the early A250s, it seems to have made no difference, as more than 3,000 Condor A350 models were built over a five year period from 1973, all with Ducati, or licence-built Ducati engines.

In the A350, the Ducati desmo head engine was detuned (from 30 hp to just under 17 hp) for more reliability, while other concessions to durability and longer service life included a milder cam, external cartridge-style oil filter and rubber engine mounts. For inconspicuous patrolling around the countryside, the A350's exhaust is also heavily baffled and ceramic coated, making it very quiet. Electrics are only six volt, with ignition by points and coil, not the electronic system used on Ducatis of the same era. Front and rear wheels were interchangeable, with the latter able to be removed without removing the chain.

The dual seat is comfortable, and hard-frame saddlebags along with a large, sturdy rear rack give plenty of storage space. A map pocket is attached to the top of the tank and there are even rifle slings on each side, should you need them!

A350 production ceased in 1978, but many were still in service with the Swiss army as late as 2001. Since then, these bikes have begun to appear on the civilian market, attracting a small clique of devoted followers around the world, like Ben Van Helden, but very few have made their way to Australia. If you can find one out here, you're virtually guaranteed not to meet a Condor rider coming the other way!

Basic servicing and repair presents no more of a challenge than it does for an equivalent Ducati, but bespoke items like tanks and guards will be more difficult to replace. Prospective buyers will also need to retrofit blinkers should they desire to ride an A350 legally on the road, as they weren't built with turn indicators from new.

Military enthusiasts could do well to consider these machines as an alternative to genuine (and expensive) WWII-era British and German military bikes. The quiet operation, rifle mounts and storage options would make the A350 an attractive option for hunters, too.

TRIVIA
After they stopped building motorcycles in 1978, Condor continued to build bicycles for the Swiss military. The same basic design was produced for over 90 years before a modern seven speed bicycle was introduced in the early 1990s.

Having no relationship to the Condor marque beyond sharing the same name, the 'Seeley Condor' was developed by English racer, Colin Seeley, at the end of the 1960s. Seeley's 'Condor' was a café racer that combined a tuned Matchless G50 engine with a frame of Seeley's own design and manufacture.