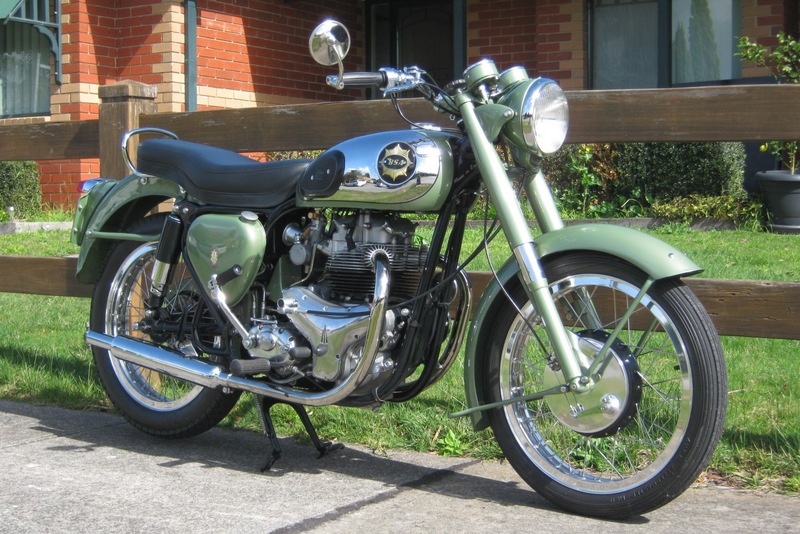 Andrew's Road Rocket featured in the August 2011 issue of JUST BIKES. If you remember that issue, you may also recall Andrew was starting a second rebuild after the bike was virtually destroyed in an accident following the 2009 BSA Motorcycle Owner's Association (BSAMOA) National Rally.

The accident left Andrew in as bad a shape as his bike, and the recovery has been long and arduous. It took some time for the Victorian enthusiast to get the motorcycling bug again, but get it he did, thanks to the support of BSAMOA members and a trip to the 2011 All British Rally, where his planned Rocket resto took a different, and ultimately rewarding, turn.

If you're not familiar with the All British Rally (ABR), it's a mecca for Brit bike owners and enthusiasts, attracting hundreds of British-built bikes across all makes, models and eras. The ABR is held annually each April (this year's event runs from April 25 - 28) at Newstead, near Castlemaine, in central Victoria

At the 2011 ABR, Andrew had something of an epiphany. His love of bikes and riding was back, even though he hadn't had a running bike of his own since the accident. However, the number of RED Road Rockets he saw there cooled his desire to rebuild his own machine. Truth be told, Andrew said there wasn't much to 'rebuild' anyway, which made the decision to take the resto in a different direction much easier.

"Although I loved my Rocket, (the ABR) changed my mind," Andrew said. "The bottom line was I wanted something different. I decided to build a 1954 Shooting Star."

By this stage, Andrew had already sourced a frame, wheels, fuel tank and other parts to go with the meagre remains (oil tank, one shock and an assortment of nuts and bolts) he was able to salvage off his wreck. With the frame and a number of other parts being common to both the 650cc (A10 Road Rocket) and 500cc (A7 Shooting Star) models, it not only made the idea of a Shooting Star project easier, but also practical, as Andrew essentially didn't have to start from scratch.

"The frame I had sourced to re-build my Road Rocket with was actually for a Shooting Star," Andrew said. "Then, as luck would have it, I came across the correct year set of engine cases, then I stumbled onto the twin carb head that is unique to the '54 Shooting Star. I then had most of the parts to complete the engine."

If you recall the article on Andrew's last project, you'll know how fastidious he is. That same determination to make the project as authentic and accurate as possible was transferred to the Shooting Star.

Andrew set himself the goal of having the Shooting Star restored and ready to ride to the 2012 ABR. There was still a LOT of work to be done, so that meant a lot of shed time! Andrew's good mate, Thomas, was a huge help throughout the project, doing a lot of the welding, bending and fabrication that Andrew's injuries prevented him from doing on his own. Parts were sourced from friends, BSAMOA members and online, with a number of parts that couldn't be found locally coming from Lyford's in the UK.

While the parts were coming in, Andrew was busy repairing the smallest imperfections in the frame and tank (he's pedantic, remember?!) ahead of painting and assembly. The original 'fatty' rear shocks were rebuilt (and "cost a heap," Andrew said), while the front forks were treated to an upgrade kit which makes for easier, smoother riding, as Andrew explained.
"(The) fork upgrade kit comprises damper rods and progressive springs, to stop the pogo effect that most BSA's are born with. Even without oil in them they felt much better than the originals."

Painting was entrusted to Ray Drever of Ray's Custom Painting in Drysdale, while parts for plating were split between Huntingdale Electroplating and Classic Chrome in Geelong. The rims Andrew already had weren't worth re-chroming, so he sourced an all-new pair from the UK.

With the project picking up pace in late 2011 - mainly because the 2012 ABR was getting closer! - other parts were being sent off for repair, cleaning or refurbishment, too. The seat was treated to new foam and cover courtesy of Alan at Oz Trim in Ringwood. Andrew said that Alan has resurrected a lot of BSA seats and did another fantastic job on his. Similar praise was given to Woody's Hydro Blast in Sandringham.
"All the alloy parts went off to Woody's. If you want your parts looking like new again, hydro blasting them is the ONLY way to go, Greg and Louise do the best job in town."

"Once I got the engine cases back, they were given to fellow BSA club member, Pete Turner, to work his magic on the bottom end," Andrew said. "The rebuild took a bit longer than expected due to various problems."

Already familiar with the scarcity of certain BSA parts from this era thanks to the Road Rocket restoration, Andrew knew there were some tough - and expensive - decisions to be made on the Shooting Star, too.

"Original 54 SS cases don't grow on trees," Andrew said. "So there was only one option - repair them. Most of the bushes had to be made oversize as they had been removed and replaced on numerous occasions, so standard size OD just wouldn't cut it," he added.
"I got the engine back from Pete, who did an excellent job sorting out what was a very ordinary set of cases, at a cost."

The Shooting Star's 500cc twin was also fitted with a new cam, new bushes and bearings, the crankshaft was ground and bottom end fully balanced. Thanks to Pete, the barrel was excellent once again, sleeved back down to standard. Andrew finished off the engine's top end himself, fitting the pistons, barrel, head, etc., but the project hit a speed bump here.

"Just when I thought it was going along smoothly, I forgot that I was using larger valves," Andrew said. "So I had to remove the pistons and massage them with the die grinder so that the oversize valves didn't foul on them.
"Once this was all sorted, I was able to bolt in the engine, the reco gearbox, the primary, etc., etc."

With parts arriving back from plating and painting by the start of 2012, Andrew was getting the Shooting Star looking like a bike again. With the forks and swingarm in place, Andrew laced up the rims himself. Doing spokes 'in-situ' on the bike instead of on a jig is unusual, but Andrew said he's never had a problem with trueing using this method, and said it's also helpful for confirming alignment.

With the bike back in running condition, and with the 2012 ABR less than a month away, the Shooting Star was ready to be fired up for the first time, but "firing it up" proved to be more literal than Andrew imagined.

"I had twin Type 6 (pre-Monobloc) carbs and they look great on, but they leaked straight down into the maggy," Andrew said. "As soon as Thomas started to kick the bike over, it burst into flames! Fire engulfed the whole bike. Luckily I was prepared and had a fire extinguisher close by.
"What a frantic few seconds! Petrol fumes, smoke, and powder from the extinguisher was everywhere. Then the Mrs opens the garage door 'What the hell are you doing in here?!,' she said. She could have come home 10 minutes later," Andrew laughed.

What could have been a disaster resulted in only a few minor parts being burnt badly enough to need replacing. As you can imagine, Andrew ditched the Type 6 Amals, replacing them with a matched pair of Monobloc 389 and 689 units that he had prepared earlier. Andrew said these have been reliable, leak-free and work sensationally.

With the ABR a few scant weeks away, last-minute jobs included a new set of exhaust pipes and modification of the levers to enable Andrew to operate them effectively due to limited use of his hands. Another week of sorting out and adjusting parts, for both performance and comfort, saw the Shooting Star ready - finally - for its ABR debut.

"I got the bike registered and attended the All British Rally as planned," Andrew said. "I love it when a plan comes together!"

The attention to detail that's a hallmark of Andrew's restorations paid off with a 'Best Bike' award for the Shooting Star at the 2012 ABR, followed by a 'Best BSA' trophy at the 2012 Triumph Owners Motorcycle Club's Link Run, as well as the 'Best Bike' award at last September's 8th BSA National Rally in Queensland.

"While winning trophies is great, the real trophy for me is the bike itself," Andrew said. "It was great therapy."

Andrew extended thanks to everyone that helped with the build, with special gratitude for all the Vic Rehab staff that helped him get back on his feet, especially his physio Adam, without whom Andrew said none of this could have happened.

So what's next? "See you all at the All British Rally in April," was Andrew's first response, adding that his next project may well be a 'BSA Special'. Sounds intriguing!

If you're heading to the 37th All British Rally this April 25 - 28, keep an eye out for Andrew's gleaming green '54 Shooting Star. It's a bike that's worth seeing in the metal. Registration details and further info on the 2013 All British Rally can be found at www.bsa.asn.au 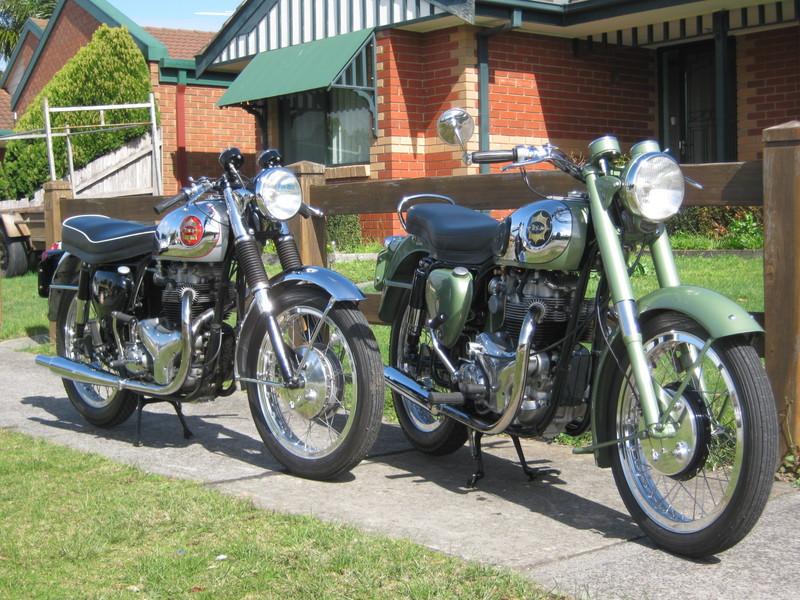 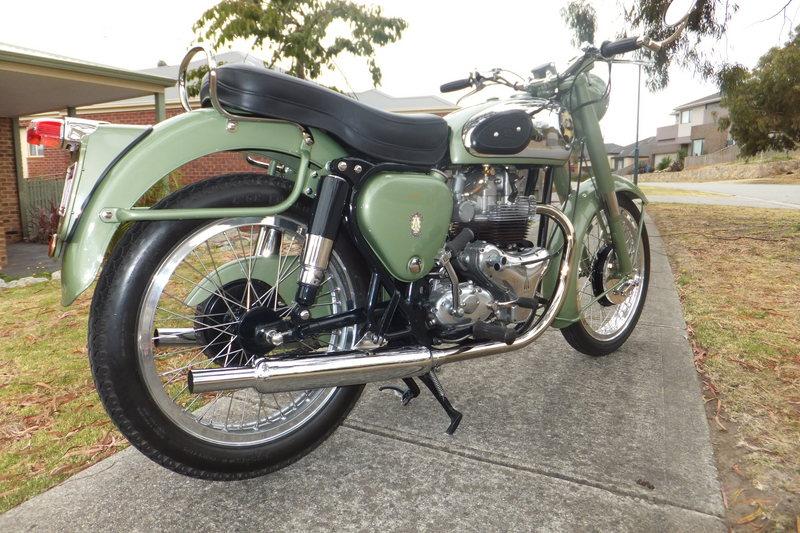 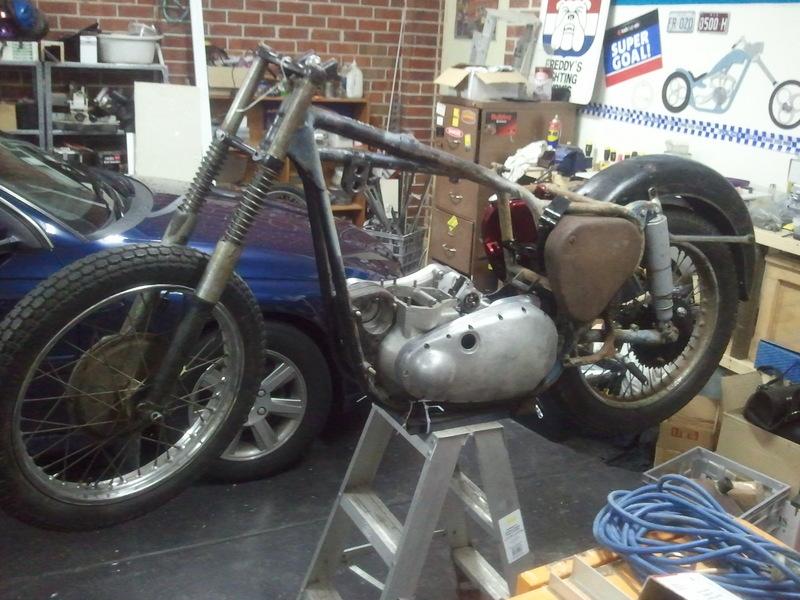 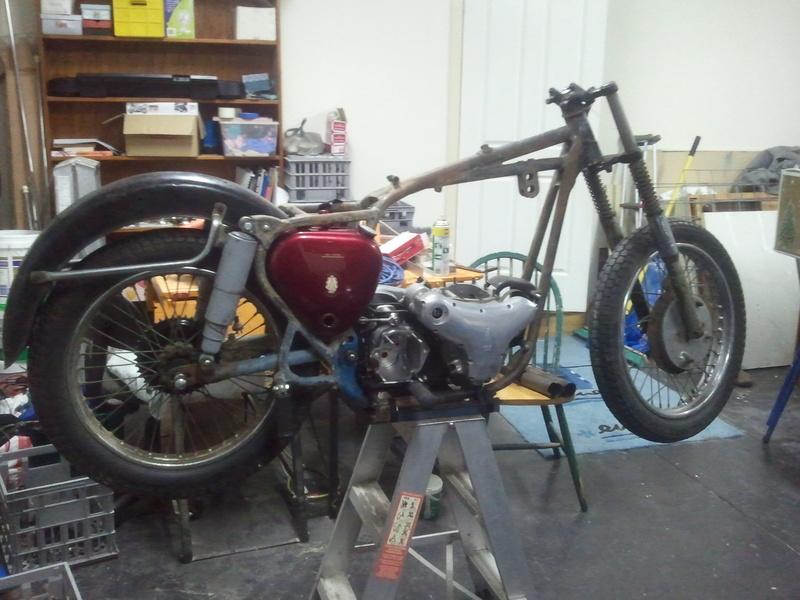 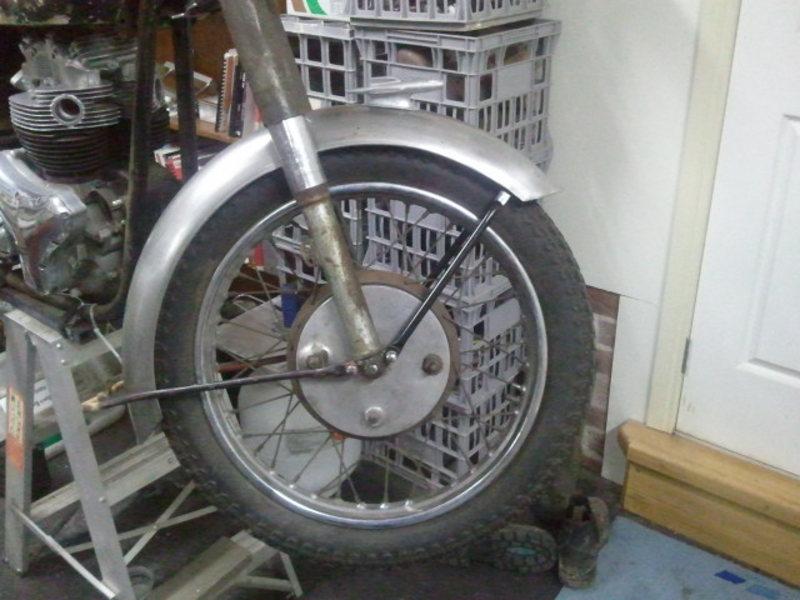 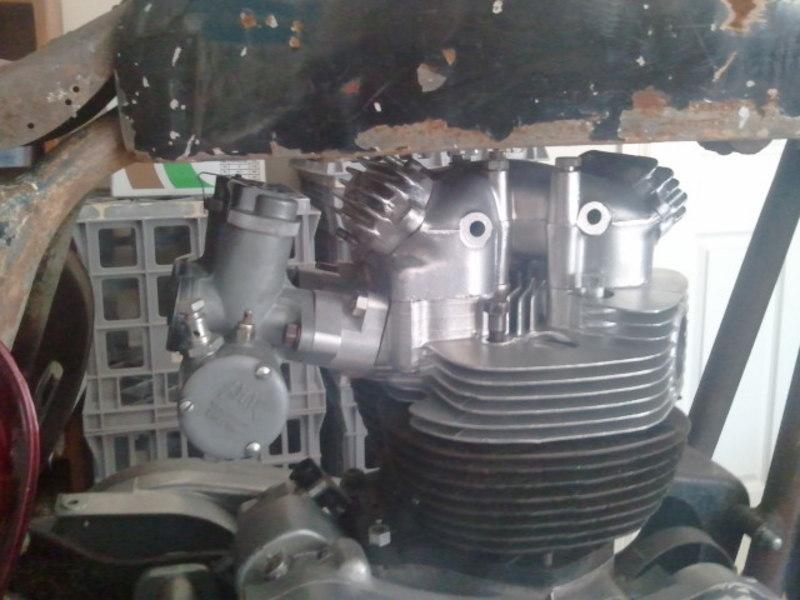 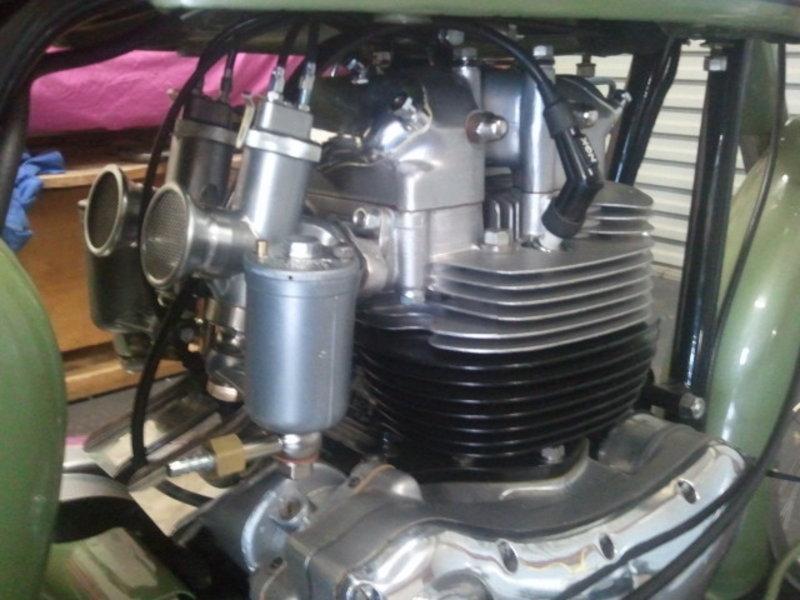 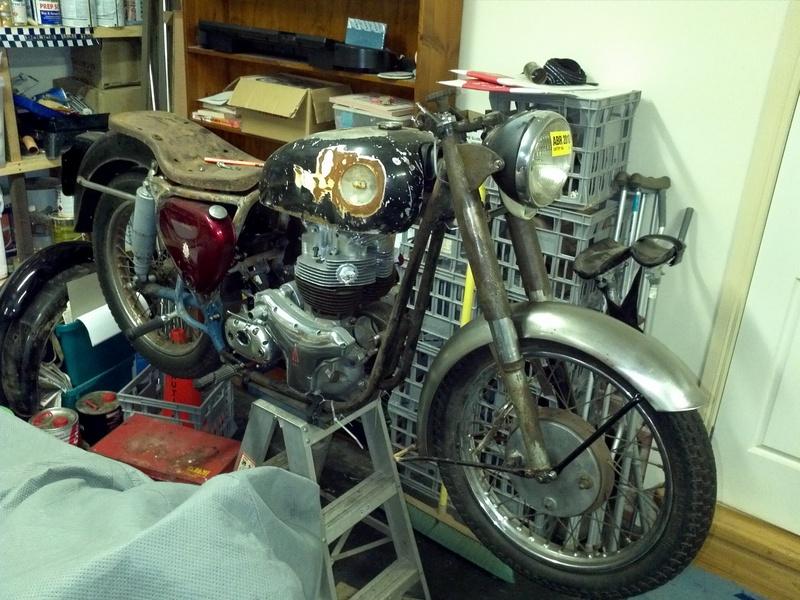 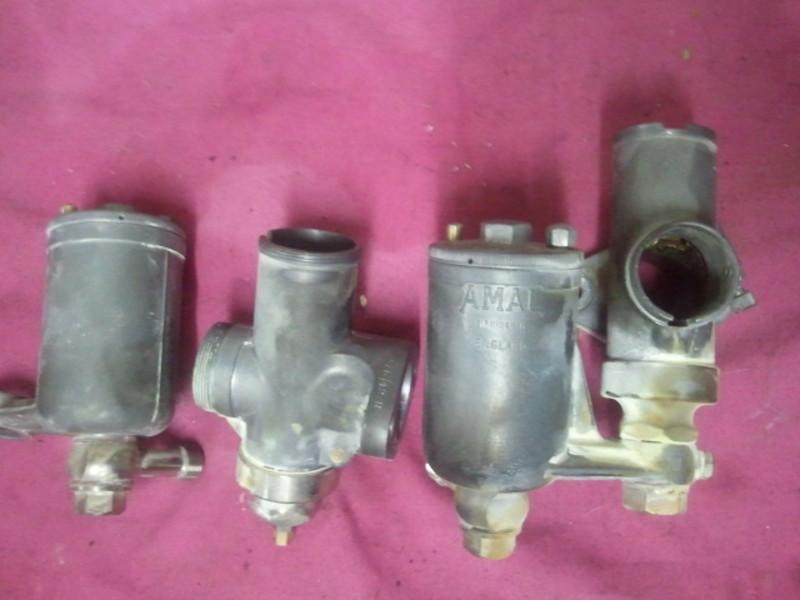 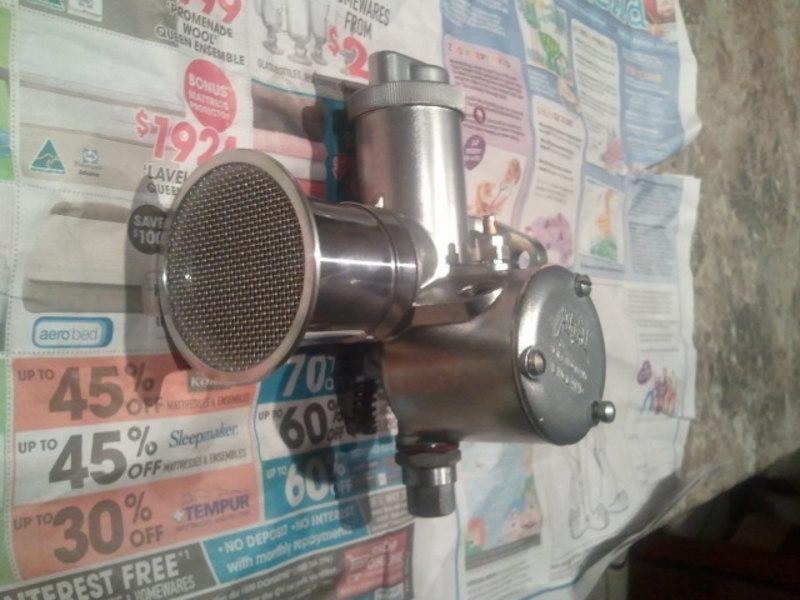 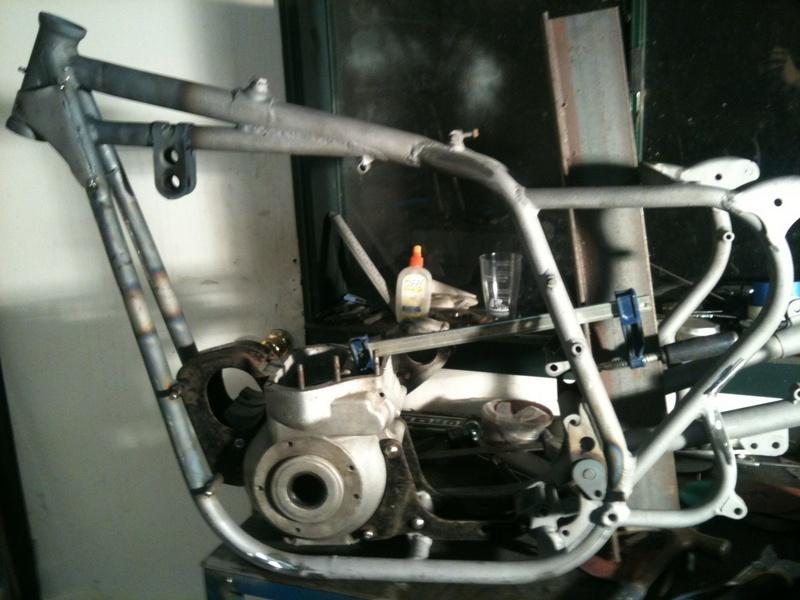 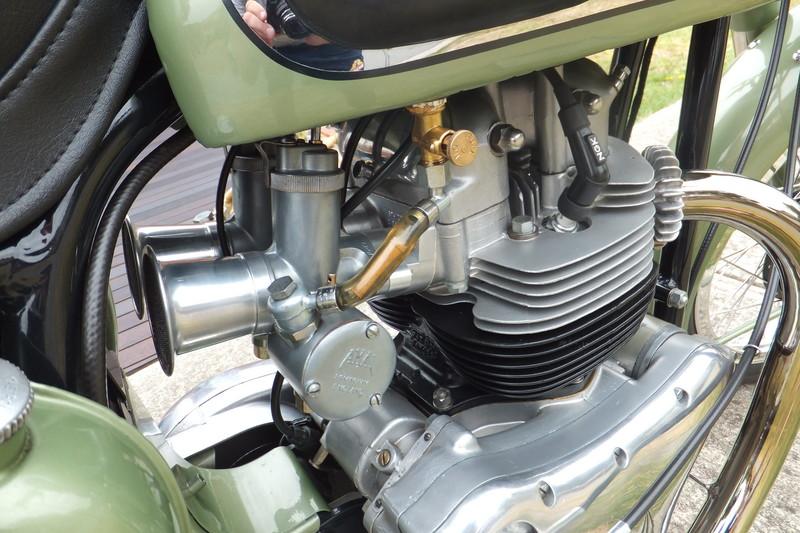 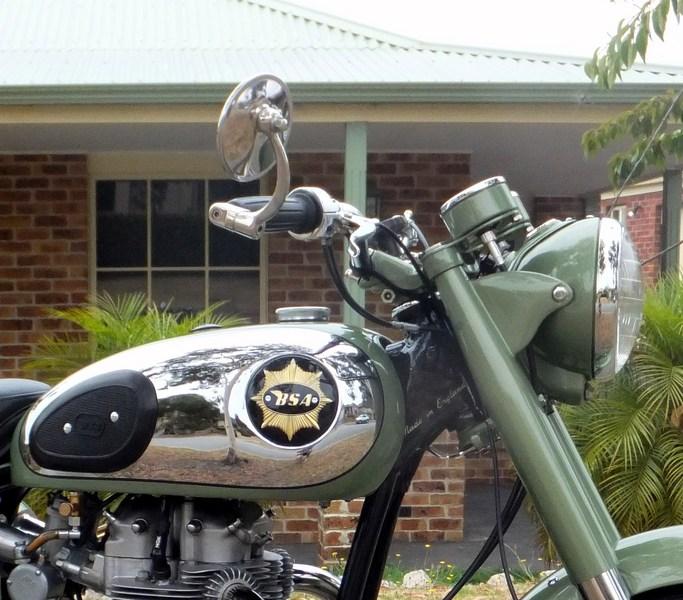 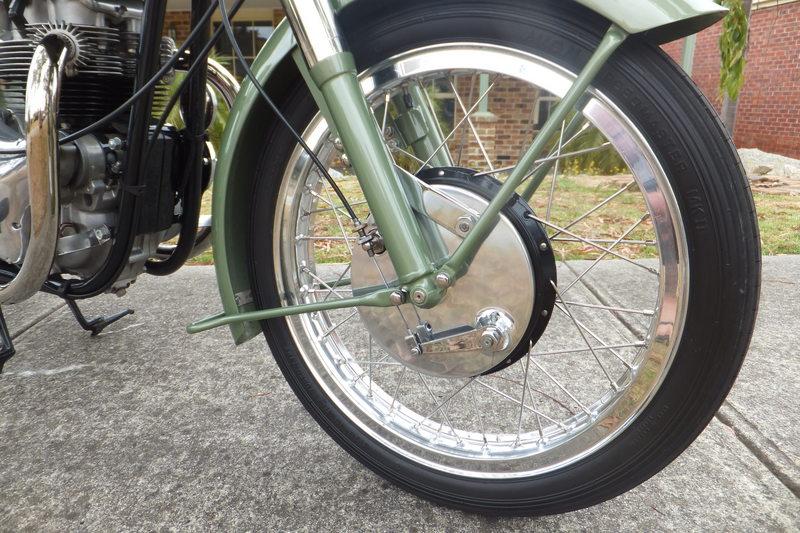 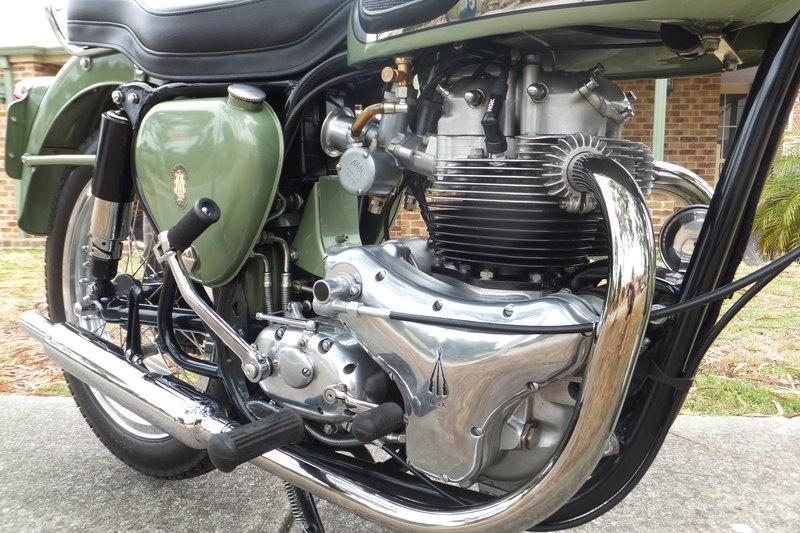 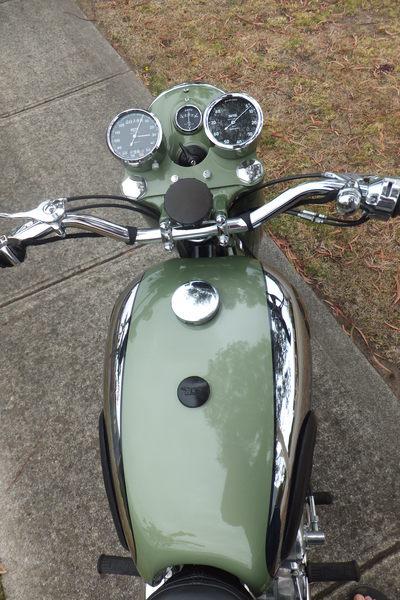 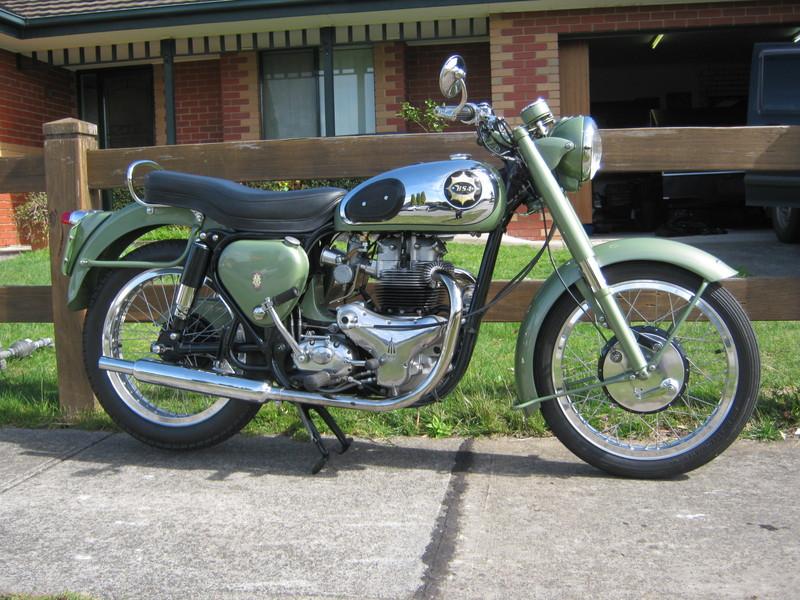 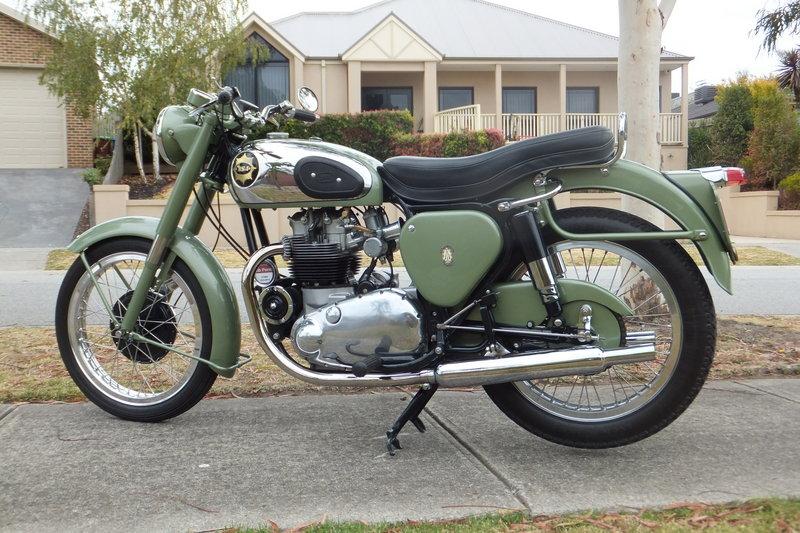 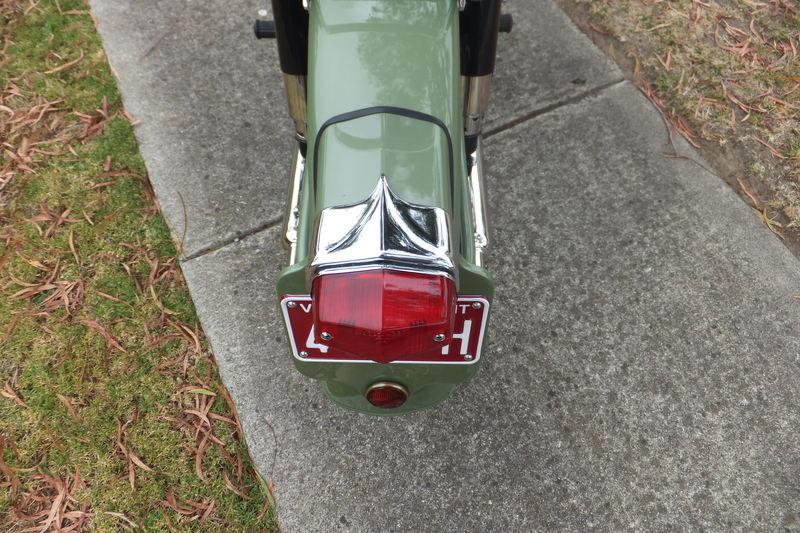