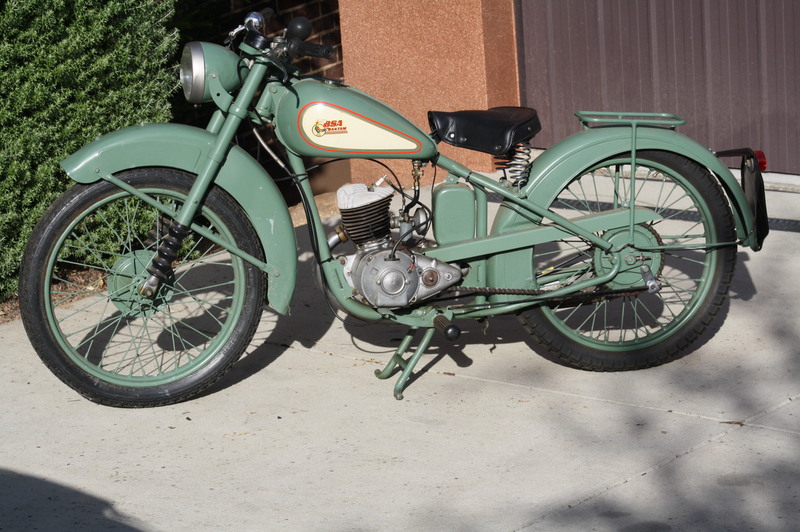 What had started out as the rather blandly-branded "D1" upon its initial release as an export-only model in June 1948 was relabelled as the "Bantam" for its 'home market' release in the UK five months later
In a little over a year since its initial unveiling in mid-1948, BSA's Bantam had became not only one of the Birmingham firm's most popular models, but also one of the most successful across the entire British motorcycle industry.

What had started out as the rather blandly-branded "D1" upon its initial release as an export-only model in June 1948 was relabelled as the "Bantam" for its 'home market' release in the UK five months later. The Bantam name would subsequently be applied to versions sold in all markets from 1949 onwards.

Of course, it's now common knowledge that the Bantam was based largely on a pre-war German motorcycle - the DKW RT125 - acquired as war reparations. BSA wasn't the only one to re-brand the German design, with copies of the DKW appearing all over Europe, in the USA (as a Harley-Davidson, no less!) and even forming the basis for the first Yamaha motorcycle. Unlike most of the other immediate post-War copies of the RT125, BSA reworked elements of the DKW design to suit British tastes, but kept some advanced - at least for 1948 - features in the form of telescopic forks and a unit construction engine & gearbox.

Despite its meagre size, the 123cc single provided adequate power, arguably more than most of its competitors in the market at the time. The combustion chamber design meant it was also more efficient than other two-strokes of the period and thus more economical. This became a major selling point, as petrol was still being rationed in the UK and some Commonwealth countries at the time. The three-speed gearbox, while conventional, was well designed and presented few problems. Handling, despite the basic front suspension (greased, not oiled) and rigid rear end, was acceptable for the period, as was the steering. Being a budget bike, instrumentation on the Bantam was basic, consisting only of a D-shaped speedometer. As with most bikes of this period, the Bantam had no indicators or brake light.

19-inch wheels, a welded tubular frame construction (rather than pressed steel), and foot gear change were features rarely seen on small motorcycles in the late 1940s, so their appearance on the Bantam went some way to it being perceived as a "real" motorcycle, rather than an autocycle or moped. This, combined with its reliability and ease of use, saw the Bantam embraced by a wide range of users, from learner riders to commuters and travellers of all ages. The Bantam was also adopted by Great Britain's GPO, becoming their "postie bike" for decades. Bantams also saw use in military, roadside service and police circles, so advertising of the period depicting it as "everybody's motorcycle" was no boast.

On its 1948 debut, the Bantam was available in one colour - Mist Green - which was used for the rims, hubs, spokes, frame, forks, mudguards, toolbox cover, headlight shell and fuel tank. This was broken by a cream-coloured panel on the fuel tank, inside of which was the winged BSA logo in red. In order to keep the cost down, no chrome plating was used. The same colour scheme was carried over for 1949, but one important, distinguishing feature was added in the form of the 'cockerel' graphic to the tank. This addition became a signature feature of the Bantam for more than a decade.

While the Bantam had been a success, it wasn't perfect. Flaws identified by early owners were addressed in 1949 with the release of a number of improvements and upgrades. One of the minor fixes involved strengthening the Bantam's weak centre stand by replacing the original clip fitting with a C-shaped arm and spring, but improving the Bantam's ride over rough surfaces required something more major. BSA addressed this with the addition of a plunger rear suspension option in late 1949. While it didn't remove many of the bumps, this basic form of suspension at least eliminated some of them.

The other complaint concerned the somewhat feeble electrics. The engine-driven Wico-Pacy 'wipac' magneto generator meant that the headlight didn't work unless the engine was running. Late in 1949, battery-operated Lucas electrics were offered as an option to replace the magneto. This also allowed for the fitting of an electric horn and brake light. Both the plunger rear and 6-volt battery electrics could be ordered as separate options (the latter adding _6 to the UK purchase price), but BSA also decided to combine the two together and offer the result as the Bantam 'De-Luxe' model. This was released at the UK's Earls Court Motorcycle Show in late 1949.

What had caught BSA by surprise was the Bantam's swift adoption as a race machine in its debut year, particularly in scrambles, and Australia can take some of the credit for this. The first Bantams appear to have reached our shores at around the same time it was making its UK 'home market' debut in late 1948. It didn't take long for the Bantam to be used off-road here, becoming the forerunner of today's dedicated ag bikes. The little Bantam proved to be sturdy and reliable off the bitumen, and these properties were soon exploited in scrambles and other forms of off-road competition.

Similar 'green lane' usage in the UK led BSA to offer a "Competition" Bantam at the same time as the De-Luxe. The engine was virtually unaltered, but a decompressor was fitted, and a larger rear sprocket was added to lower the gearing. The comp models also had a folding kickstart lever, slimmer mudguards with modified attachment points, and an exhaust that was angled upwards to improve ground clearance. A competition model could be ordered with either the rigid or plunger rear end. Although technically 1950 models, both the competition and De Luxe Bantams were released in late 1949.

Today, the Bantam is still the most successful British motorcycle of all time. All the properties that made it popular back in 1949, like ease of use and reliability, are still present today. Like any classic, the Bantam still needs maintenance, though, especially on things like the spark plug, carburettor, contact breaker points for the magneto, and greasing of the front suspension. Being a two-stroke, you're pretty much obliged to do your own fuel-oil mix these days, too.

As a little club runabout, the Bantam excels. It's also one of the easiest British classics to repair and restore. However, with a top speed barely over 70 kph, the Bantam isn't advised for use on anything but back roads, although there are probably some owners who ride theirs on major arterials. The brakes, being small drums, aren't great, but the Bantam's mild top speed means this isn't a major negative. Of course, the Bantam has no indicators, which presents a safety issue, effectively limiting the Bantam to club use these days. Modern upgrades, like the fitting of indicators, could be made, but the trade-off is a loss of originality.

The good news with an early rigid Bantam, like the '49 model, is that it's generally more collectable than the later plunger and swingarm models. The 1949-50 'competition' models are also desirable, as they were only offered in limited numbers. There's an abundance of owner's clubs, and most spare parts are relatively easy to obtain. As an entry into the world of classic motorcycling, there's arguably no better starter than an early Bantam.

While a new Bantam in 1949 cost the British purchaser around _76 4s, the 'tyranny of distance' meant the Australian Bantam buyer had to shell out approximately _105 10s for the same machine. Unlike some motor car manufacturers, there was never the numbers in Australian motorcycle sales to warrant local manufacture, even with a big seller like the Bantam.

One quirky, but practical feature on early Bantams was the old-style 'bulb' horn. Looking more at home on a vintage car, the bulb horn was necessary on the magneto-equipped models, as there was no battery to run an electric horn. This was cleverly incorporated into the design by running it through the frame's steering head stem.

In its original form, the DKW RT125 had the gear shifter on the left, so shifting it over to the "British" position on the right meant changes had to be made to the primary drive. This required the fitting of a crossover shaft, which in turn made replacing it a time-consuming job when it broke, as the entire engine had to be split apart to access it. 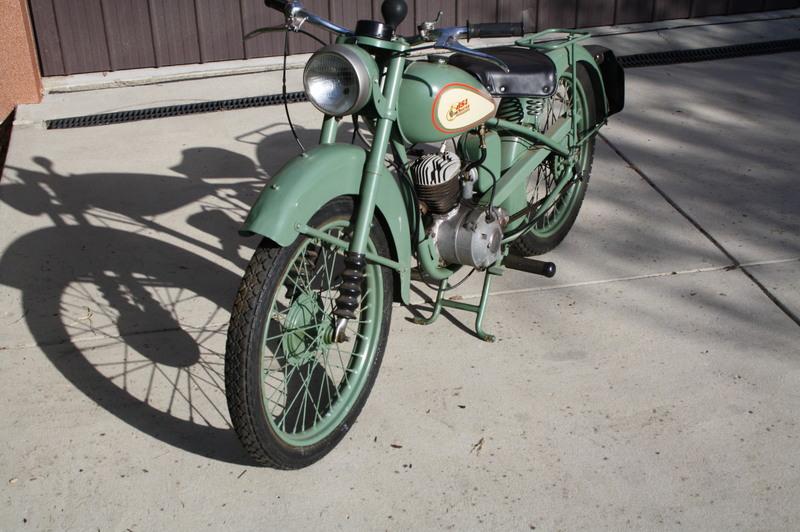 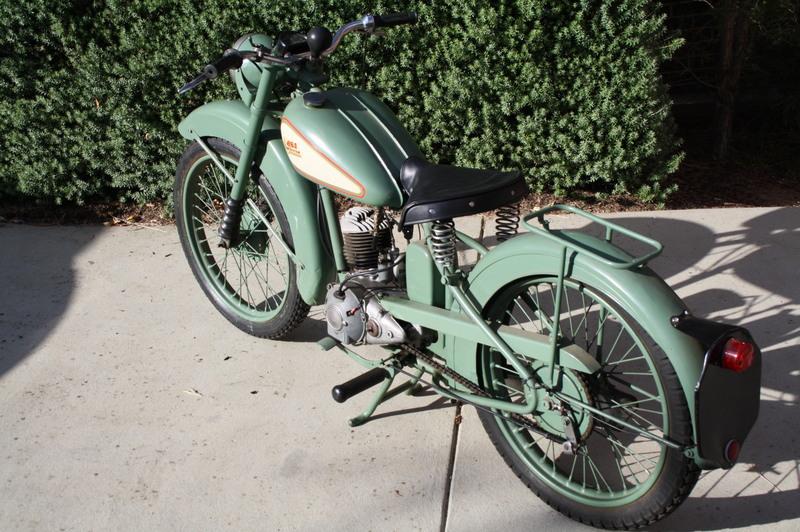 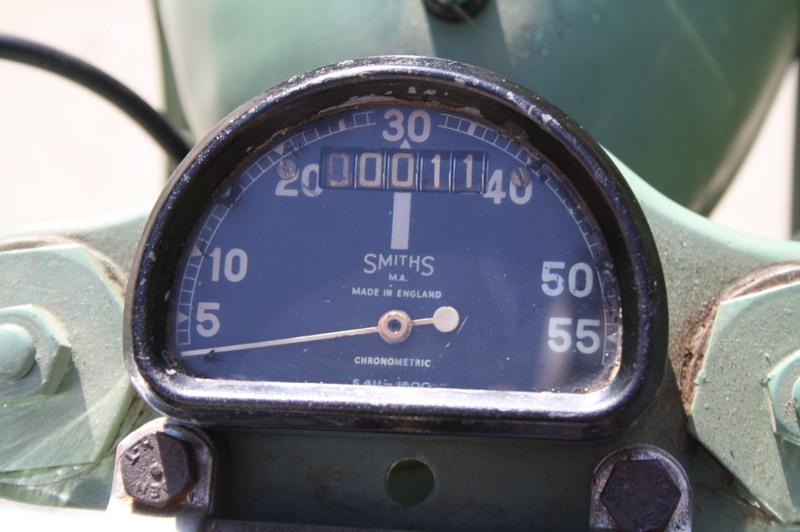 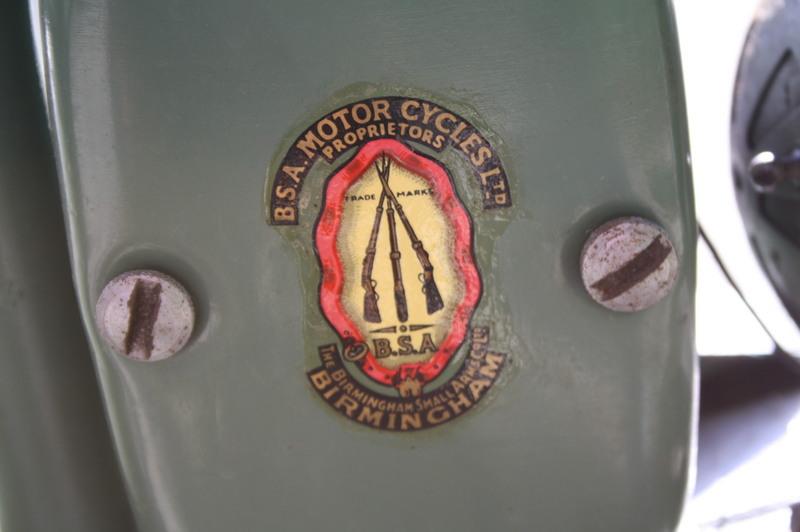 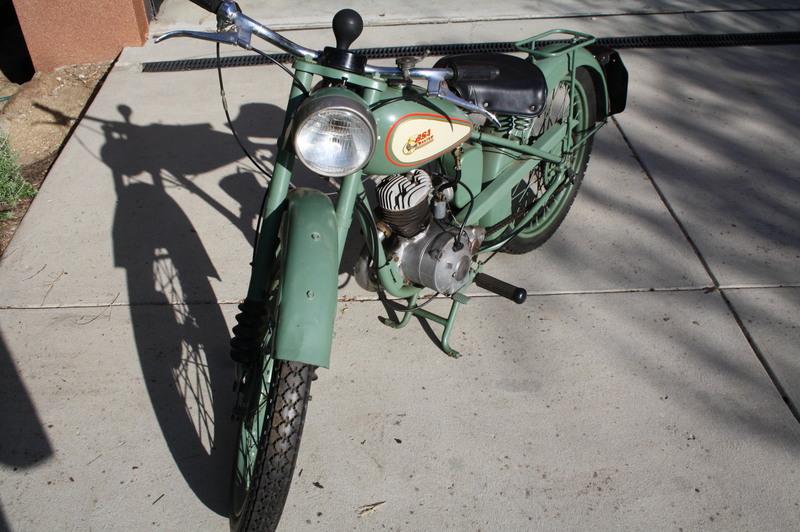