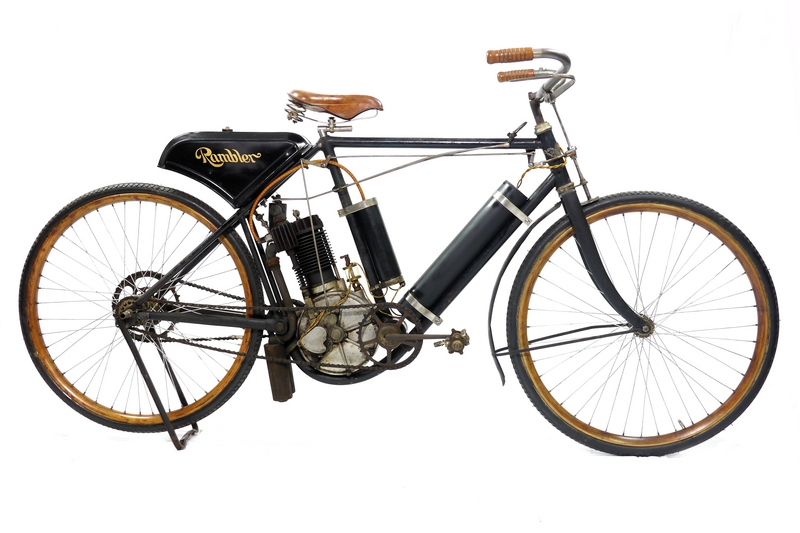 Rambler' motorcycles were first built and offered for sale in late 1901, shortly after Indian and almost a full year before Harley, but today the name is more often associated with cars than motorcycles. One of these rare machines is being offered for sale at Bonhams' Las Vegas Motorcycle Auction in January, 2013. Incredibly, the lot on offer is completely original and unrestored.

Ramblers were manufactured by the 'American Cycle Manufacturing Company', along with Cleveland, Imperial, Tribune, Crescent and Columbia. Essentially, they were all the same machine, marketed under different names to capitalise on known and popular bicycle brands. American Cycle was the creation of Colonel Albert Pope, one of the leading industrialists in the post-Civil War period, and a prominent figure at the dawn of the American auto industry.

Despite appearances to the contrary, the Rambler of 1902 was described as a purpose-built motorcycle, with a longer wheelbase and sturdier frame than most of its contemporaries, but still had obvious bicycle origins. The Rambler's engine was also built in-house, and many other components on the Model B (a cheaper, more basic Model A was also available) were also produced exclusively for what Pope hoped would be one of the premier offerings in the emerging motorcycle market.

The single cylinder engine featured automatic ignition timing and a decompressor, driving through double reduction drive to the rear wheel, with a clutch mechanism operated through the pedals. A curious feature of the Rambler, but common for the period, is the use of wooden rims for both the front and rear wheels. These were changed to the more familiar metal 'clincher' rims shortly afterwards.

When new, the 2 1/4hp Model B Rambler retailed for around US$200, which was reasonably expensive, but significantly cheaper than automobiles, which were still the province of the wealthy at the turn of the century.

Unfortunately, Pope's dreams of a motorcycling empire using multiple brand names didn't match reality, and the Rambler motorcycle (not to be confused with the British-built Rambler autocycle that was around in the 1950s) joined its siblings in disappearing from the US marketplace by the end of 1905, with Pope relaunching the motorcycle operation under his own name in the same year.

The early history of the 1902 model Rambler being auctioned through Bonhams is unknown, but its outstanding overall condition is explained in part by the fact that it has spent decades as a display bike in the Indian Motorcycle Museum, as part of the Manthos Collection.

Described as one of the oldest and most original American motorcycles in existence, the 110-year-old Rambler will join many other classic and desirable motorcycles at Bonhams Vegas auction, including a group of BMW racebikes from the immediate pre and post-War era.

Bonhams 'Las Vegas Motorcycle Auction' will take place on January 10, 2013, at Bally's Hotel & Casino on The Strip in Las Vegas.