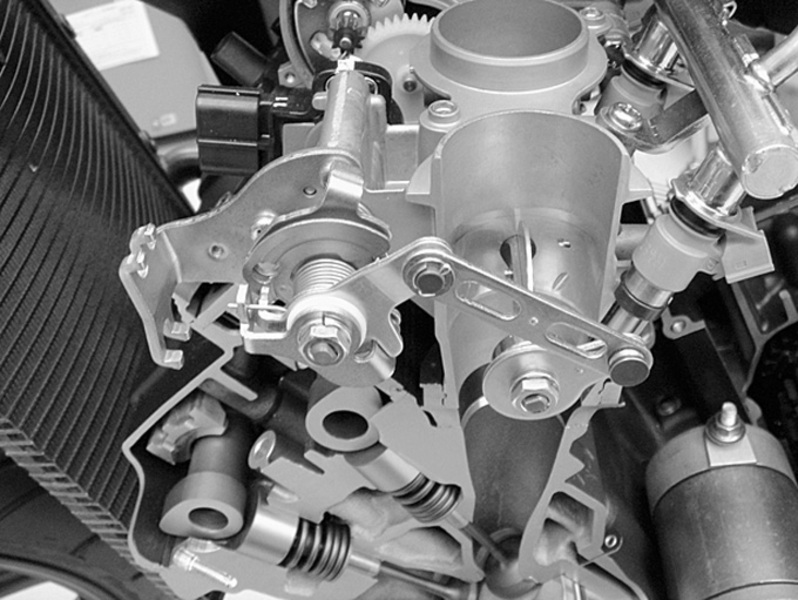 How it works
The YCC-T (Yamaha Chip Controlled Throttle) uses a conventional motorcycle fuel injection system with twin fuel injectors per cylinder, to regulate volume in accordance with calculations based on sensor input.

These CPUs use signals from the many sensors to regulate throttle valve position for maximum response and performance in all speed and rpm ranges.
In this type of system there is no active control of air intake volume. The FI system introduced on the 2002 model YZF-R1 featured a suction, or vacuum, piston that controlled intake air volume. This was followed by the FI system with a sub-throttle valve on the 2004 YZF-R1.

But for a model with the short manifold necessary for a super high revving engine such as the 2006 R6 there is not enough room for these devices. Plus in a high revving engine, smooth torque characteristics in the low to mid speed range are normally difficult to achieve.

This is the reason Yamaha developed the YCC-T system. Electronic control throttle systems have been used on cars, but Yamaha's is a faster, more compact system specifically tailored for the needs of a sports motorcycle.

The Yamaha developed system has high speed calculating capacity that produces computations of running conditions every 1000th of a second (control signals every 100th of a second). The YCC-T system is designed to respond to the throttle action of the rider by having the ECU unit instantaneously calculate the ideal throttle valve opening, and generate signals to operate the motor-driven throttle valve and thus actively control the intake air volume.

The 2006 YZF-R6 has 3 CPUs having a capacity (82bits) of about five times that of conventional units. This makes it possible for the system to respond with extremely high speed to the slightest adjustments made by the rider.
In particular, optimised control of the throttle valve opening provides the optimum volume of intake air, which makes for easy to use torque characteristics despite being a high-revving engine.

How does YCC-T perform?
The system feels like a conventional throttle, but its action is foolproof. It is impossible to bog or lug the motor by cracking open the throttle too soon in a high gear. This is because the sensors ensure optimum fuel management at all times. There are many advantages, including performance, fuel economy and emission control. Plus the fuel management is tuneable (eg. for racing) by fitting different ECUs.

YRT racer Jamie Stauffer found out exactly how well the new system works when he won all three Australian Supersport races at Phillip Island on the new R6's first outing in this country.