Shannons Timed Online Autumn Auction was a big one for fans of classic and collectable motorcycles, with a diverse array of bikes offered and some impressive prices achieved.

Conducted from 17 to 24 May, there were 41 motorcycle lots on offer, covering everything from a tiny Honda Motocompo to a blinged up Harley-Davidson Panhead tourer.

Amongst the more desirable consignments were motorcycles and sidecars from the collection of Bruce Armfield, including a rare C1914 Hobart two-stroke single, a C1955 Triumph T100 and two German-made Steib sidecars. Leading the way, though, was a 1949 Vincent HRD Rapide.

As a Vincent owner and former president of the Vincent H.R.D. Motorcycle Club, Armfield was considered an authority on these premium motorcycles. 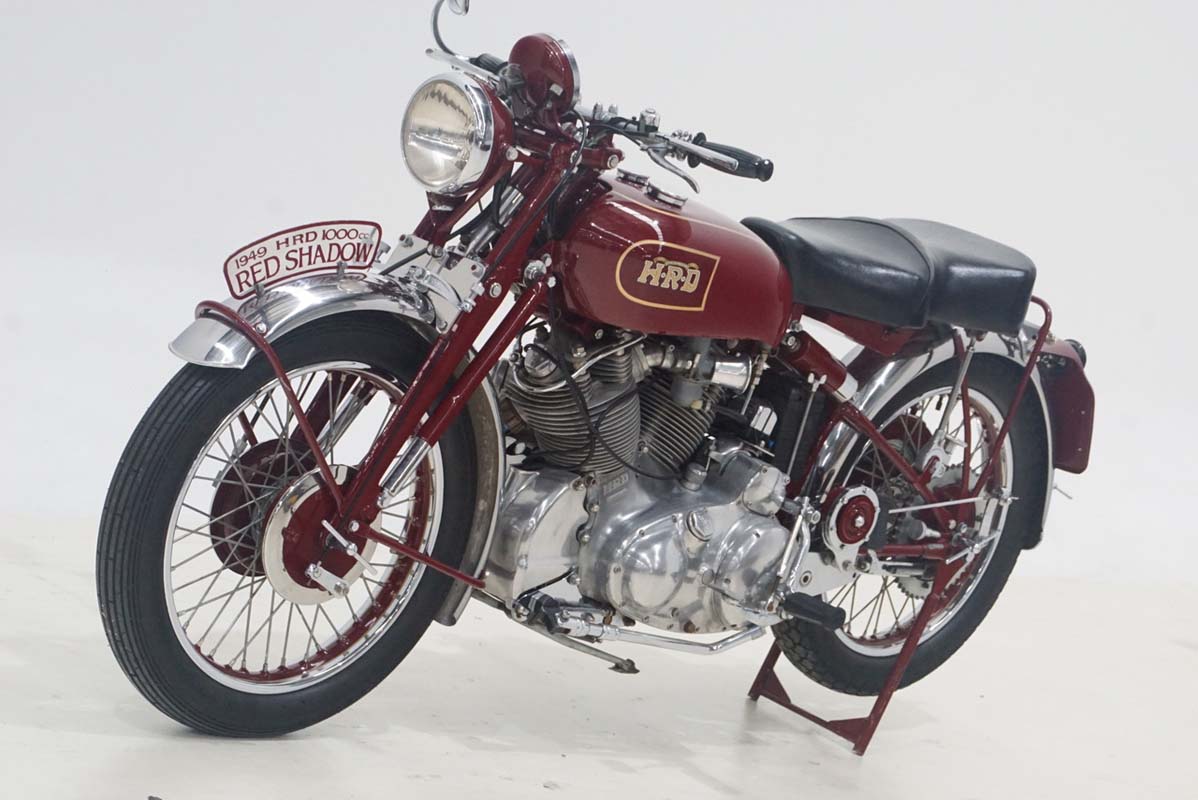 The Rapide from Armfield’s collection is from the third and penultimate evolution of a model that debuted in 1937.

Retrospectively labelled the A Series, the original Rapide was the product of Vincent’s expansion of their motorcycle offerings that included the first engine designed and built in-house. Since Philip Vincent founded Vincent H.R.D. in 1928 (purchasing the H.R.D. name from Ernie Humphries of OK Supreme, who in turn had bought out Howard Raymond Davies), he’d been using proprietary engines, mostly JAP and Villiers, but later Rudge.

After the legendary Australian engineer Phil Irving joined Vincent H.R.D. in 1931, he and Vincent began work on their own engine to remove a reliance on outside suppliers. The initial product of this was a 499cc single, variously known as the Meteor, Comet or TT depending on its state of tune, and first displayed in 1934.

Applying a pair of Meteor/Comet top ends to a common crankcase seemed a logical next step, which would take place in 1936 and be released as the ‘Rapide’ a year later. 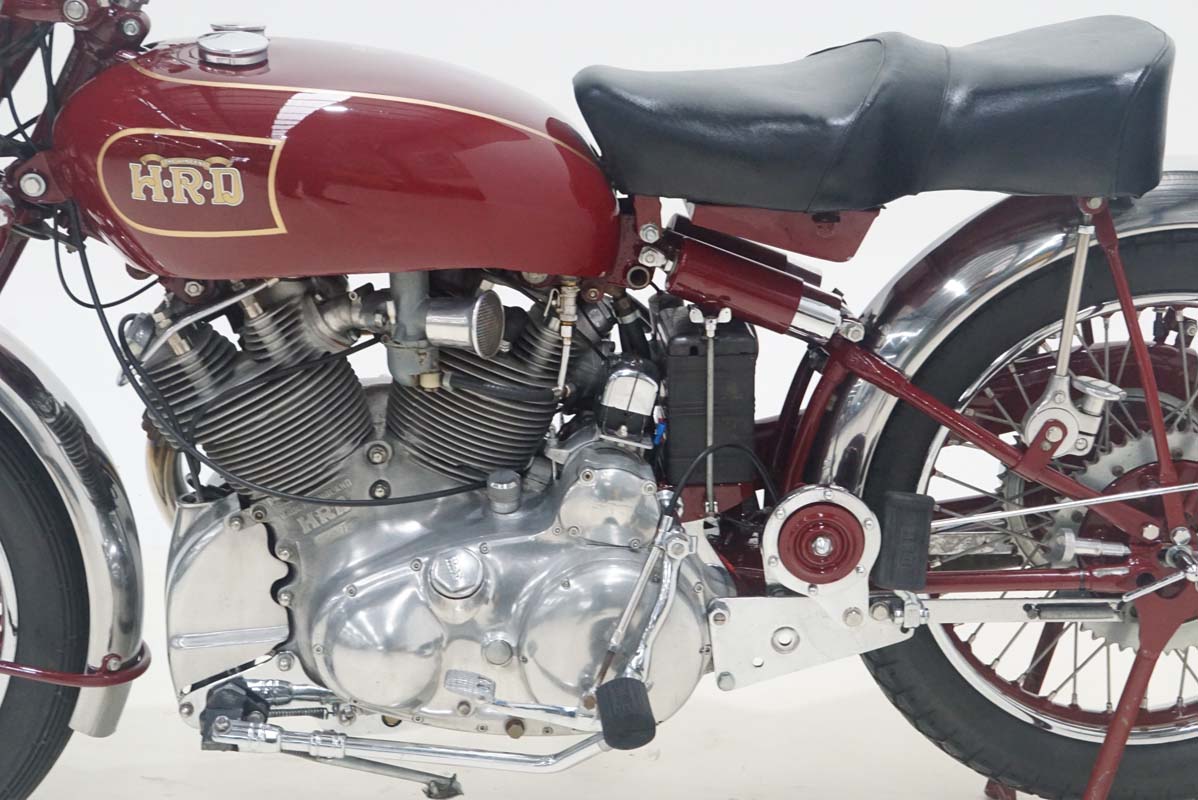 With power that many big v-twins of the period lacked, the original Rapide’s air-cooled 998cc engine was matched to a four-speed Burman gearbox, which proved to be the new model’s weakness, as the clutch and transmission just couldn’t handle the power.

In the latter stages of World War II, Vincent and Irving began work on a new, better Rapide, this time with an engine of unit construction. Other improvements included internal oil passages, fully-enclosed valve gear, a front-mounted magneto and servo-assisted clutch. And where the v-twin in the A Series Rapide was frame mounted, this updated engine would serve as a stressed member, reducing weight and wheelbase length.

Released in 1946, the B Series Rapide was so quick that Vincent advertised it with the boastful – but accurate – tagline of ‘The World’s Fastest Standard Motorcycle – This is a Fact, not a Slogan’ due to its top speed of 175+km/h in the right hands. 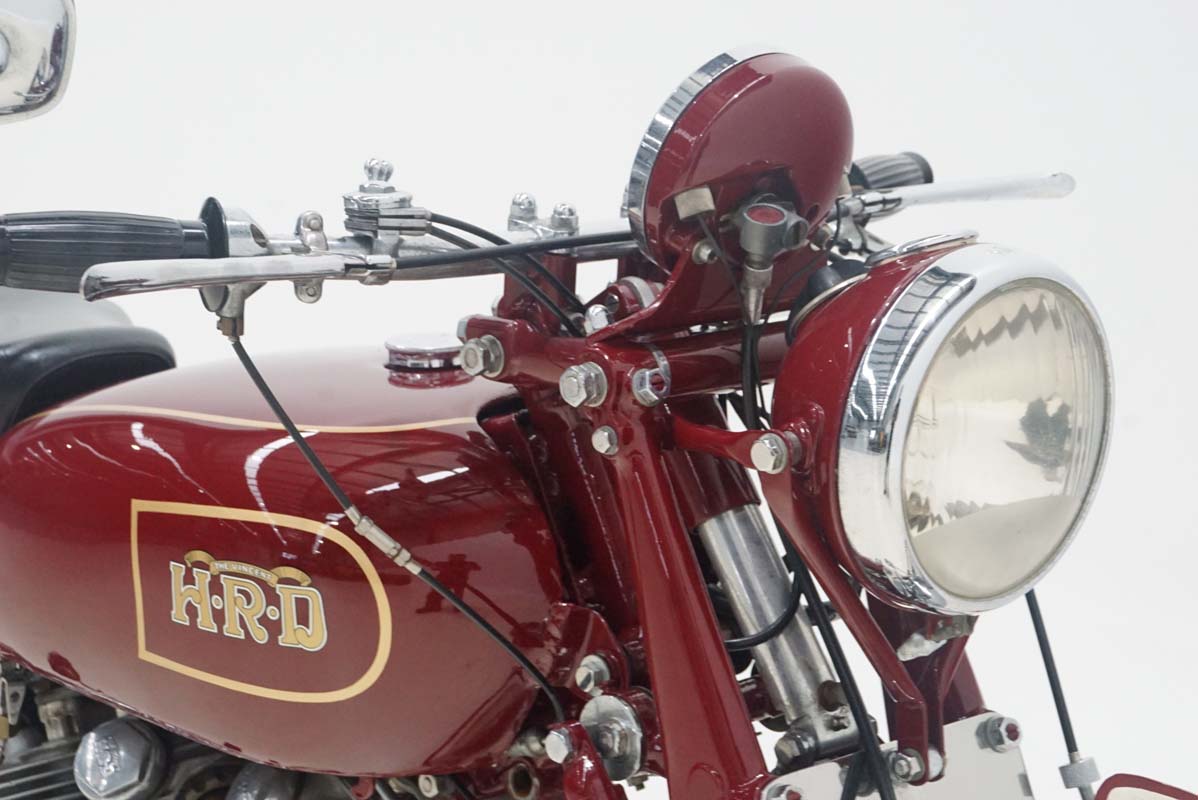 The B Series Rapide would serve as the basis for the iconic Black Shadow, which was faster again at 190+km/h. In simple terms, the Rapide was the touring model and the Black Shadow the sports model, with the Black Lightning that followed in 1951 being purely for racing.

Of the Rapide and Black Shadow, there’s a lot of commonality. The cycle parts were mostly the same apart from improved brakes on the latter, and while the Black Shadow’s engine featured upgraded internals and larger carburettors to increase output from 45hp to 55hp, it was of the same 998cc capacity. Where the Rapide used polished engine cases, the Black Shadow had these parts enamelled black, leading to the name. 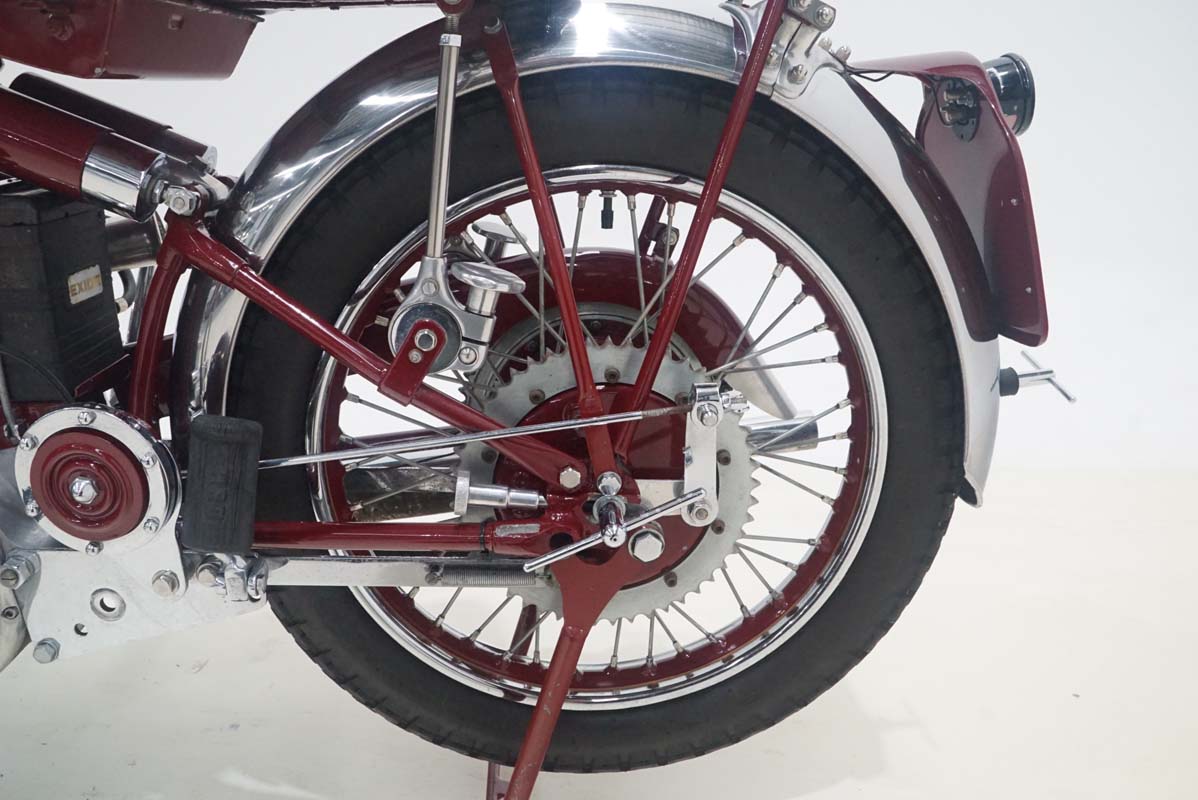 The Black Shadow made its debut in 1948, with a C Series version of the Rapide following a year later. Both these models would feature ‘Girdaulic’ front suspension, which combined elements of telescopic suspension with the girder fork front ends used on all Vincents previously. At the back end, the cantilever sprung suspension that had been a feature of Vincent H.R.D. motorcycles since the beginning, was augmented with an hydraulic shock absorber.

In this form, the Rapide C Series would continue mostly unchanged until 1955 when the D Series was launched, but this and attempts to diversify the range with smaller, cheaper models failed to save Vincent, which closed in the same year. In total, just over 11,000 Vincent motorcycles are believed to have been built between 1928 and 1955. 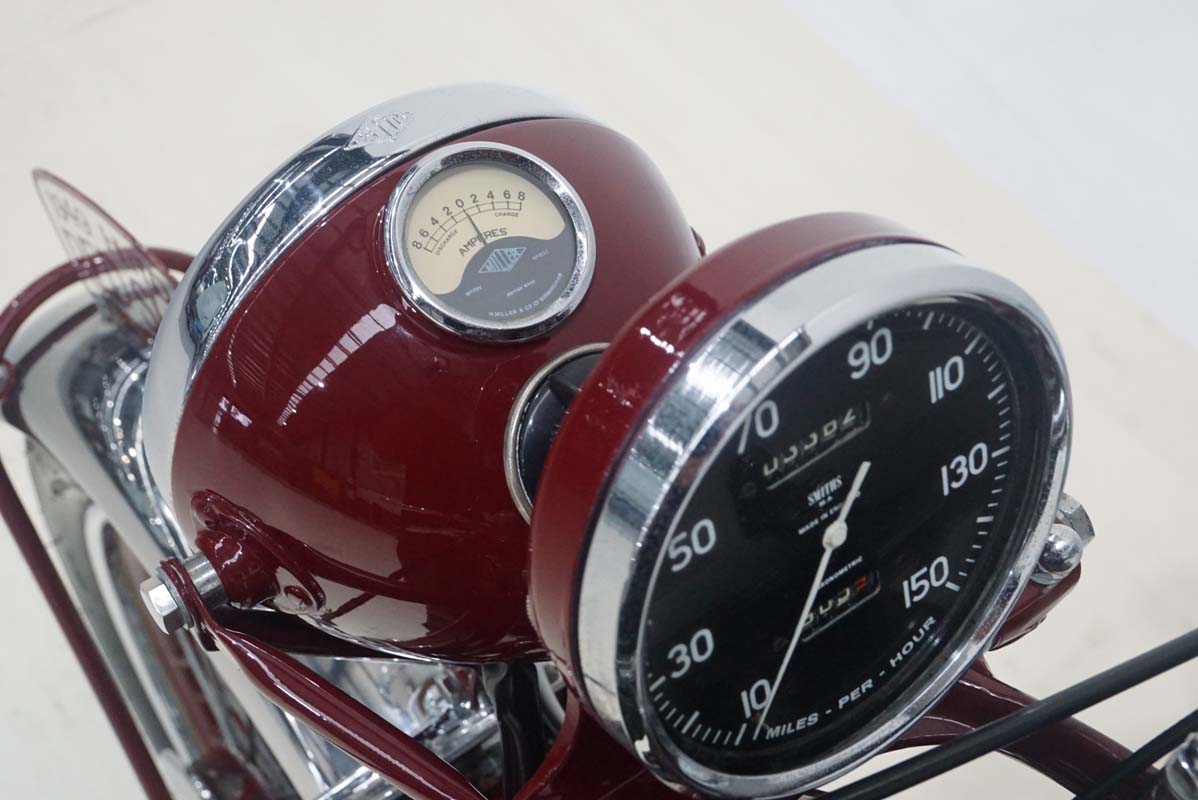 The 1949 Vincent Rapide C Series consigned for this auction from the Bruce Armfield collection carried a few features more commonly seen on the Black Shadow, like the upright 150mph speedometer and slimmer alloy mudguards.

Finished in a rich burgundy with chrome mudguards and an abundance of polished parts, the ‘Red Shadow’ name on the front numberplate is presumably Armfield’s own addition, as Vincent never offered such a model, although a ‘White Shadow’ version of the Black Shadow without the engine enamelling was produced. 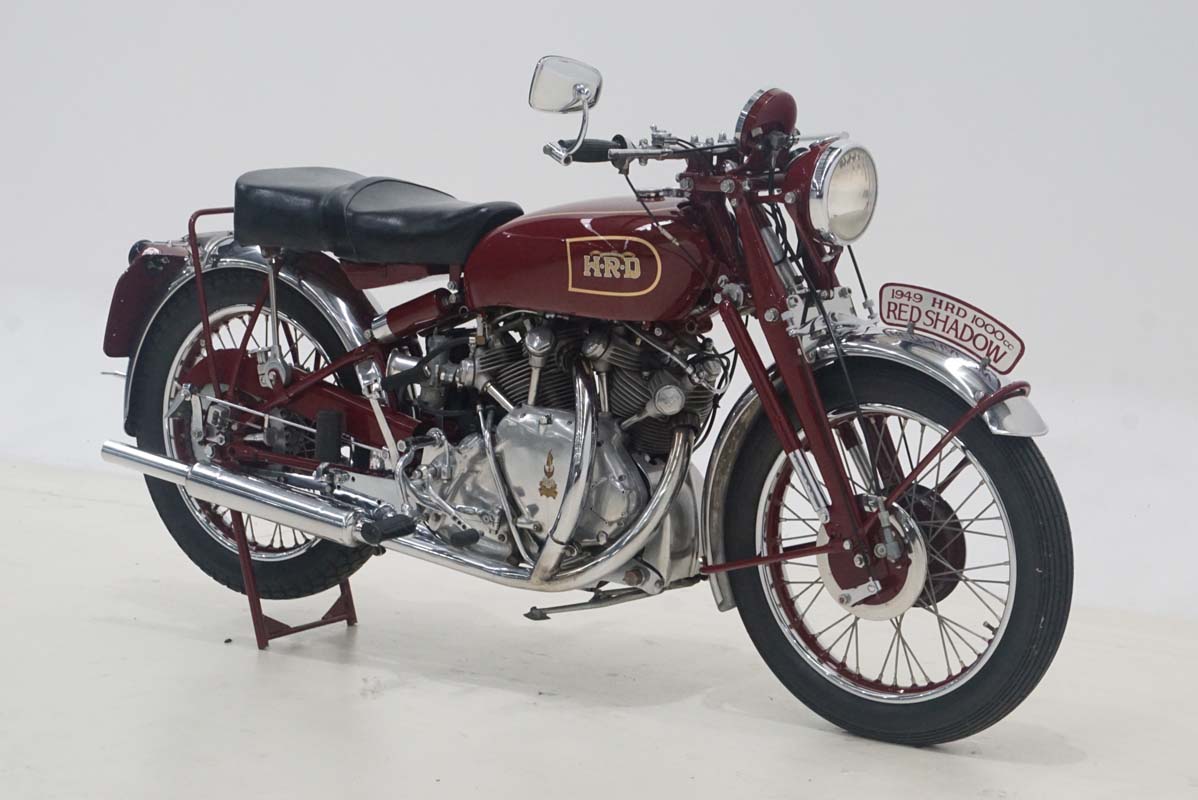 Fully restored some years ago, the bike still presented beautifully ahead of the 17-24 May online auction, according to Shannons, leading them to apply an estimate of $80,000 - $100,000.

With interest in Vincents at a high level, offering this bike with no reserve was much less of a gamble than it would have been for other models. After some competitive bidding, the Rapide sold for $124,000. 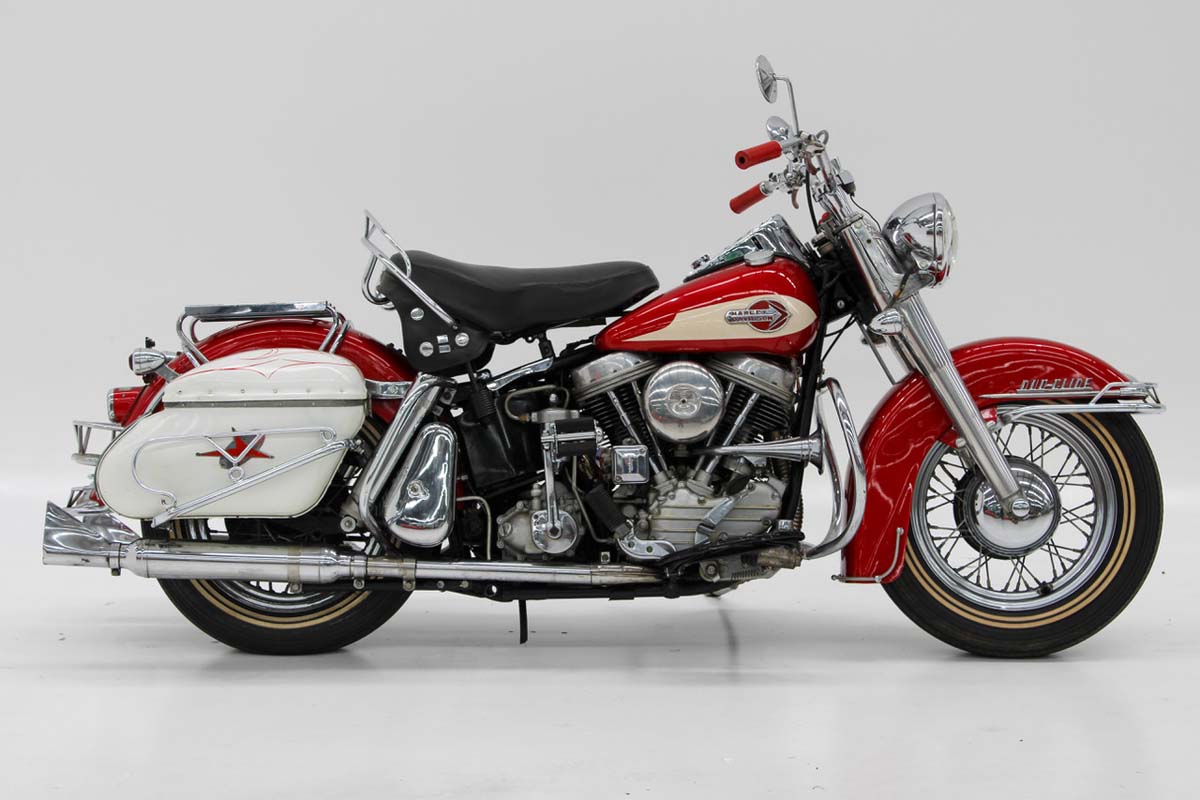 A 1959 Harley-Davidson FLH Duo Glide was another high-profile offering. Powered by the standard 74ci (1212cc) Panhead motor, the FLH on offer was fully restored and equipped with a bucket saddle, panniers and a rear carry rack. Finished in bold red and ivory, this classic Harley sold within estimate for $36,000 after a long bidding duel. 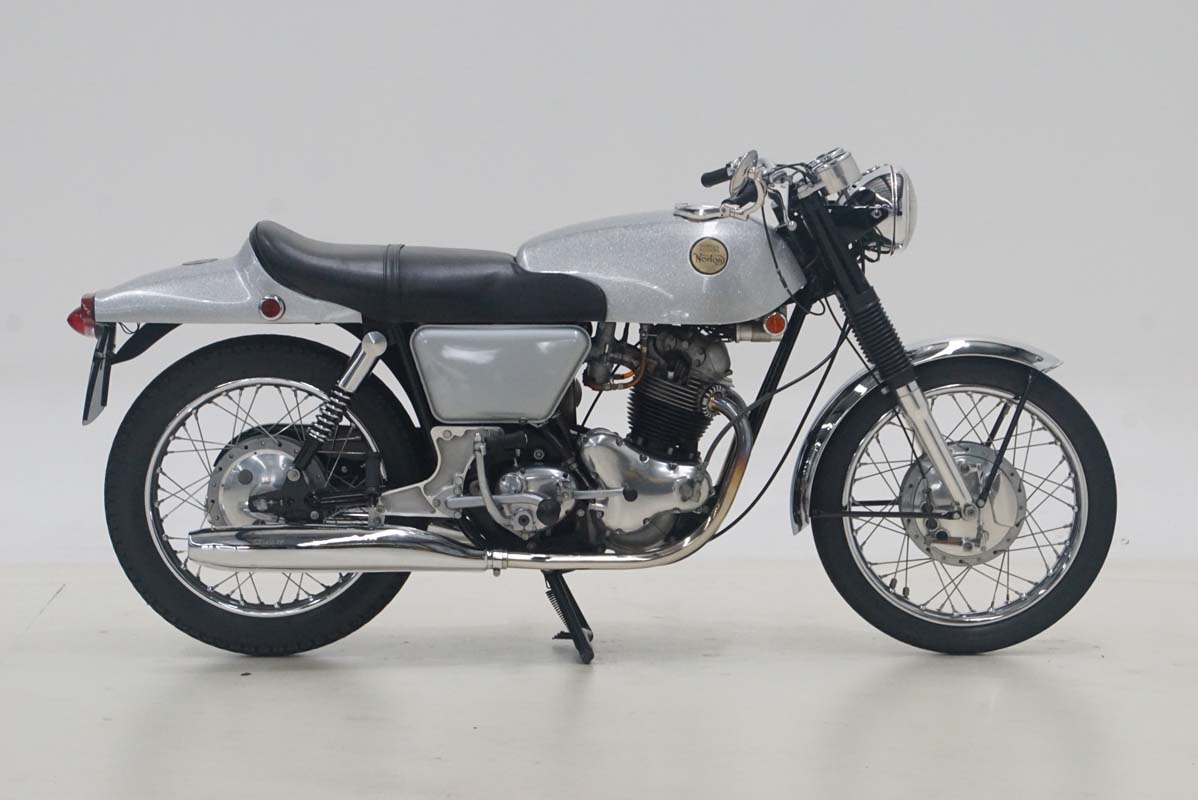 For the full results and more details from the Shannons Timed Online Autumn Auction, go to: shannons.com.au.