For a scooter, Yamaha’s XMAX 300 handles better than you’d expect and is surprisingly quick. More importantly, it’s fun to ride.

The Yamaha XMAX 300 is what a scooter should be - easy to ride, lots of space and enough torque to get you off the line quickly and safely. But it’s no lie to say that a large number of scooter manufacturers build machines to suit the enormous Asian and European population, rather than our small Australian market. So, in understanding that, it’s natural to ask if the 2020 Yamaha XMAX 300 works on our long and bumpy roads. In short, yes it does. But there’s more to this LAMS-approved scooter than that…

A New Take on Twisties

When I head out for a twisty ride on a fast machine, I often come back feeling underwhelmed, because the roads are mostly full of lazy drivers who don’t check their mirrors. I’ve spent way too much time on those long and windy coastal roads - that normally make riding a delight - having to contend with the Go-Get Sunday drivers that are doing well under the speed limit. It’s not exactly an inspiring environment for a sportsbike, but that’s where a scooter comes into play. 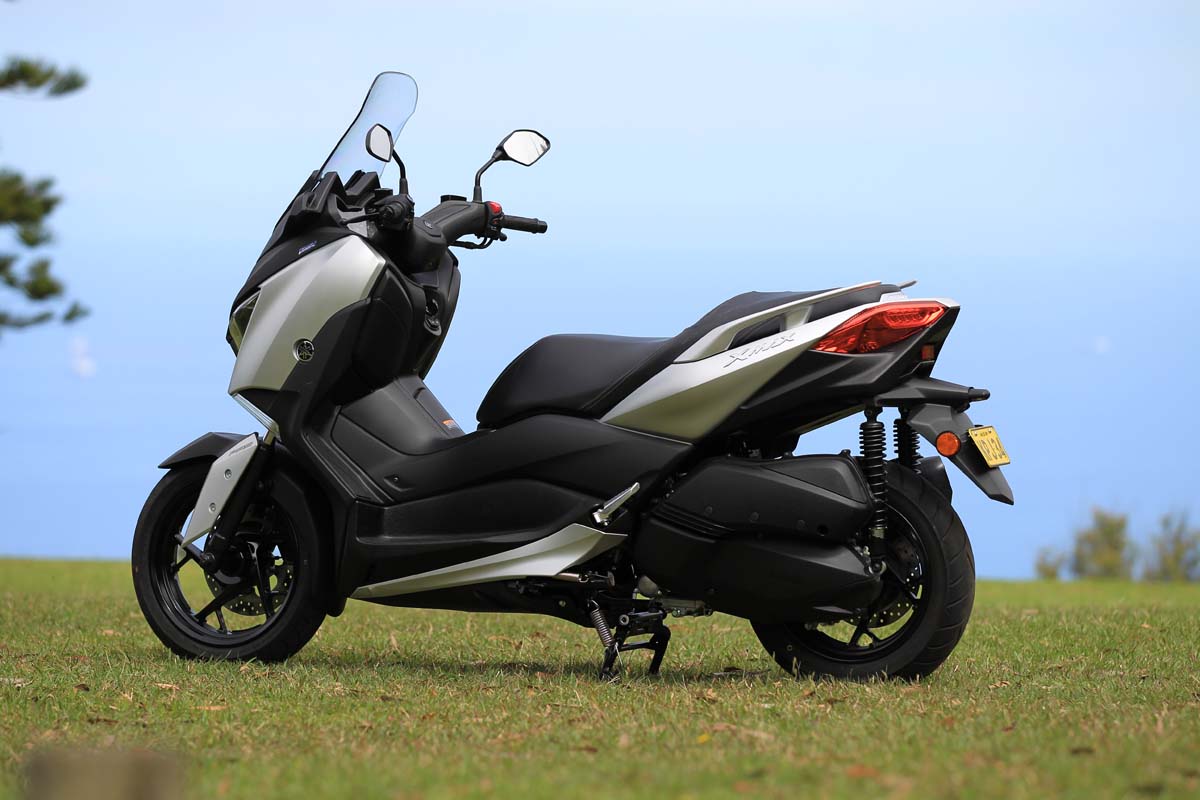 When I ride a scooter, I kick the stand off, twist the throttle and go, enjoying the wind rushing around me. It’s a different kind of fun compared to a sportsbike ride: I am able to enjoy the view as well as challenge myself to sift through traffic jams as efficiently as possible. It’s an ability the Yamaha XMAX 300 allows you to enjoy to the max.

European roads are overpopulated and car congested, which means most riders are continuously weaving in and out of traffic like a game of Frogger. Sydney traffic is at that tipping point, but the XMAX is right at home in the congestion, allowing you to slice your way through the herd and lane split with ease and confidence.

The Yamaha XMAX 300 is powered by a 292cc ‘Blue Core’ engine. There’s a lot of engineering nerdery in the Blue Core technology, but in simple terms, it maximises performance and fuel economy by optimising the combustion process while also reducing power losses through precisely controlling fuel supply and ignition timing.

Despite being less than 300cc, this single cylinder powerplant is more than enough to blast away from the lights with ease, getting in front of cars and even some motorcycles.

This engine has remained unchanged for the past few years, so it still puts out maximums of 20.2kW at 7250rpm and 29Nm at 5750rpm, which is more than enough to get you from A to B - and beyond. It does it all fairly quietly, too, thanks to a well-baffled exhaust system. 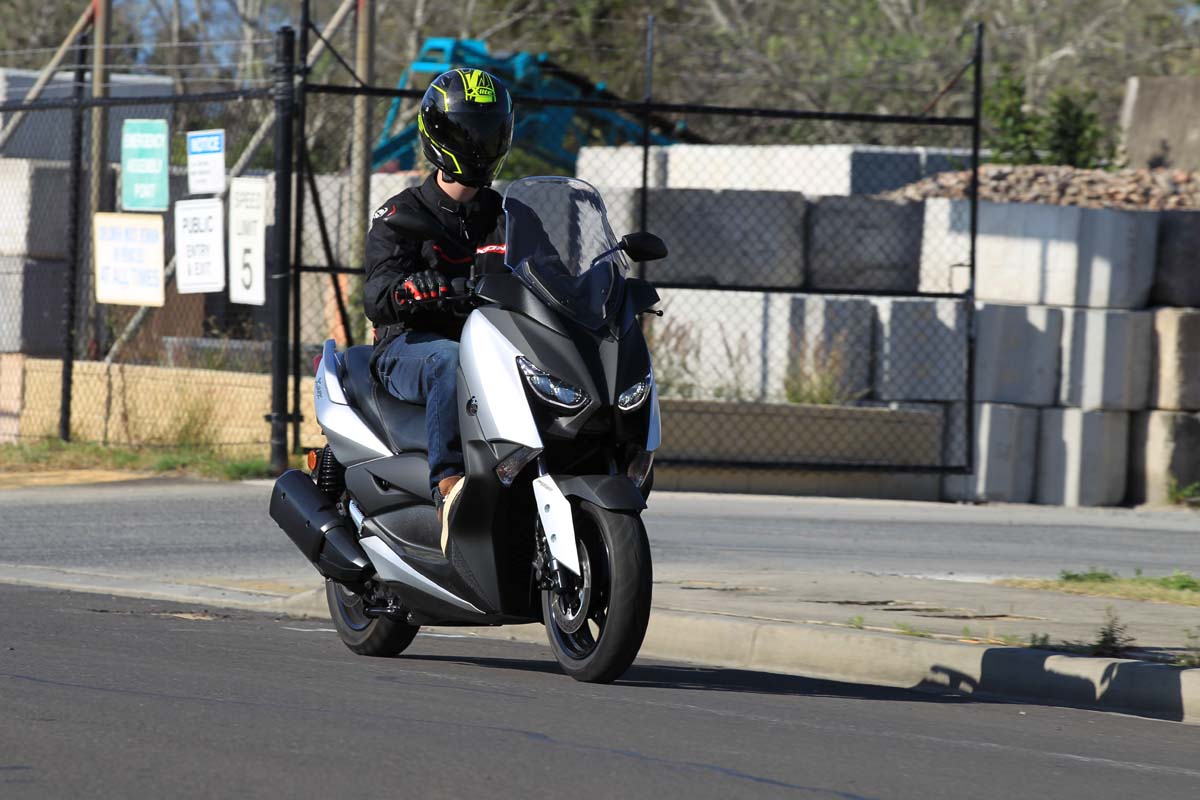 Capable of commuting to and from the city, as well as taking to the freeway, the XMAX 300 glides along comfortably at 110km/h, which is surprising given its low capacity. Compared to bikes in the single cylinder 300cc range, which usually have to be revved hard on the freeway, the XMAX glides along with ease and simplicity. It’s perfect for the Australian market that has a maximum speed limit of 110km/h. It does struggle creeping up past 110, though, but with that being said, it’s no slouch, with the gearing being perfect for urban riding.

The transmission caters for the newbie, being a V-belt automatic (aka CVT) that allows you to just twist the throttle and go.

Yamaha’s design team has selected grey as the main colour for their scooter fleet, which is another clue to the European focus. There’s the odd deviation to this, but basic colours and plain tones dominate the range – just like the hordes of grey/silver/white/black Audis, BMWs and Benzes you’ll see in Europe.

The satin silver finish on the XMAX 300 tested isn’t overly glitzy, but does shine in the light and enhances the scooter’s aggressive styling. That styling is clearly influenced by the larger TMAX 560 and the two models share design elements like LED twin-eye headlights, angular front plastics and a sinewy arrangement to the side plastics - this definitely isn’t a cutesy retro Vespa-style scooter!

Overall, the XMAX 300 design is aggressive but pleasant. It actually hasn’t changed much since this model was boosted from a 250 to a 300 for the 2017 model year. To Yamaha’s credit, that MY17 design still looks fresh five years later. I attribute that timeless appeal, in part, to the big LEDs at the front. Below those “eyes,” a third central LED light serves as the high beam, while the taillights are a twin eye set-up and also LED. 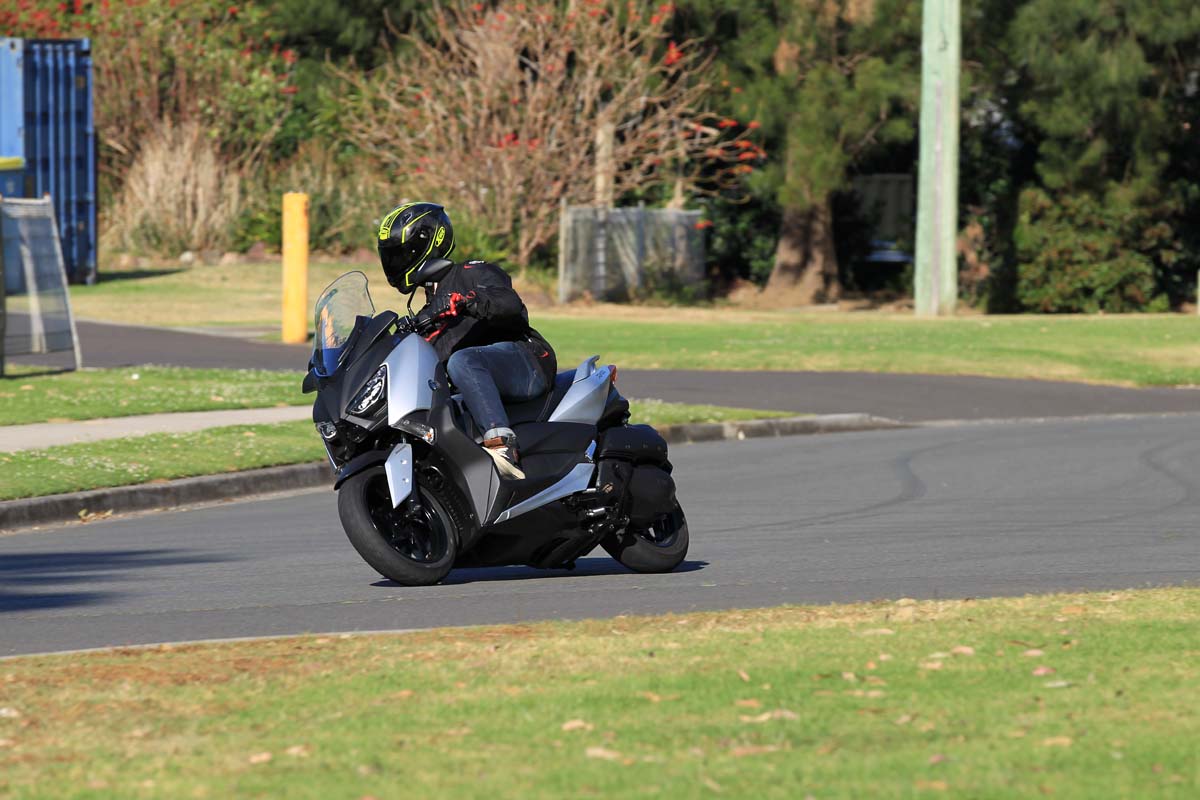 There’s plenty of under seat storage on the XMAX 300. Yamaha claim a 45-litre capacity, which is huge. Despite some necessary compromises in the configuration of that space, it’ll swallow two full face helmets, or a jacket, backpack and other riding gear, or a generous number of groceries. It could be super handy for an Uber Eats-style enterprise or other type of delivery vehicle – drinks in the under seat storage and the hot stuff in a topbox, which could sit neatly on the pillion seat.

Despite no padding inside of that under seat storage space, I found that fragile items like a camera and laptop were able to snuggle safely and peacefully, with no bumping around inside.

Additional to this, there are two separate gloveboxes in the front legshield, each of which are large enough to hold a smartphone, sunglasses or keys (more on that later). 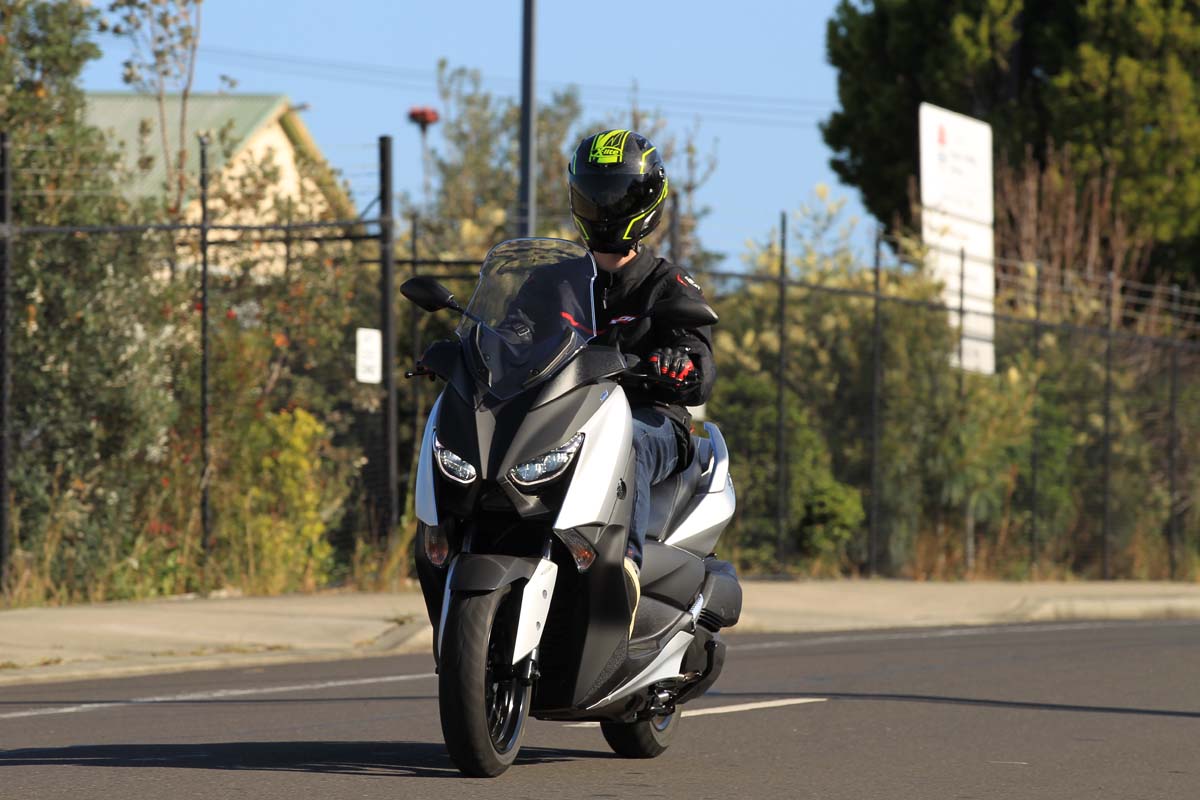 The ergonomics on the XMAX 300 are what you’d expect from a scooter – very neutral and comfortable, with a reasonable 795mm seat height - but one niggly little thing that bugged me was the leg position. After spending a month riding the TMAX 560, which is larger and longer (and probably unable to be matched by any other scooter in the comfortable leg rest department), the XMAX felt a little bit too short for my liking. Being 6 foot 1 (185cm), with most of that height in my legs, I felt like I couldn’t get suitably comfortable on the scooter. No need to panic, though, as the XMAX has two footboard positions, allowing the rider to place their feet further forward in an L-shape position. The second set of footboards aren't Harley-style forward controls, but they do make a difference for lankier riders like me.

The XMAX 300’s capability to have fun in the corners is assisted by the use of a proper, motorcycle-style telescopic fork at the front and unit swingarm with twin shock suspension at the rear. It’s not the greatest setup on offer, but you need to consider the cost and what you’re getting for it.

Like many lower-end motorcycles of similar capacity, the XMAX suffers from an unsympathetic rebound when riding over bumps. This is due to the suspension set-up sacrificing a little bit of comfort for some honest handling. Yamaha have made the front suspension work well and, despite all the bumps, it didn’t feel uncontrollable at any time and kept those fragile items in the under seat storage safe.

The XMAX 300 seat is sizable, well padded and actually quite comfortable. There’s more than enough room for a passenger (and probably two more if it wasn’t unsafe to do so), with sturdy pillion handles worked seamlessly into the design.

To suit longer commutes at higher speeds, a tall windscreen is standard and offers decent wind protection. It’s also adjustable, but you’ll need tools to do so.

Assisting rider confidence in the corners is a 15-inch front and 14-inch rear alloy wheel combination, which is small in motorcycle terms, but larger than many other scooter offerings. Finished in black on the test bike, the alloys are wrapped in a 120/70 tyre up front and a 140/70 at the rear. The larger rolling diameter of the wheels eased the harshness of the bumps slightly and performed well under braking, especially in the rain. 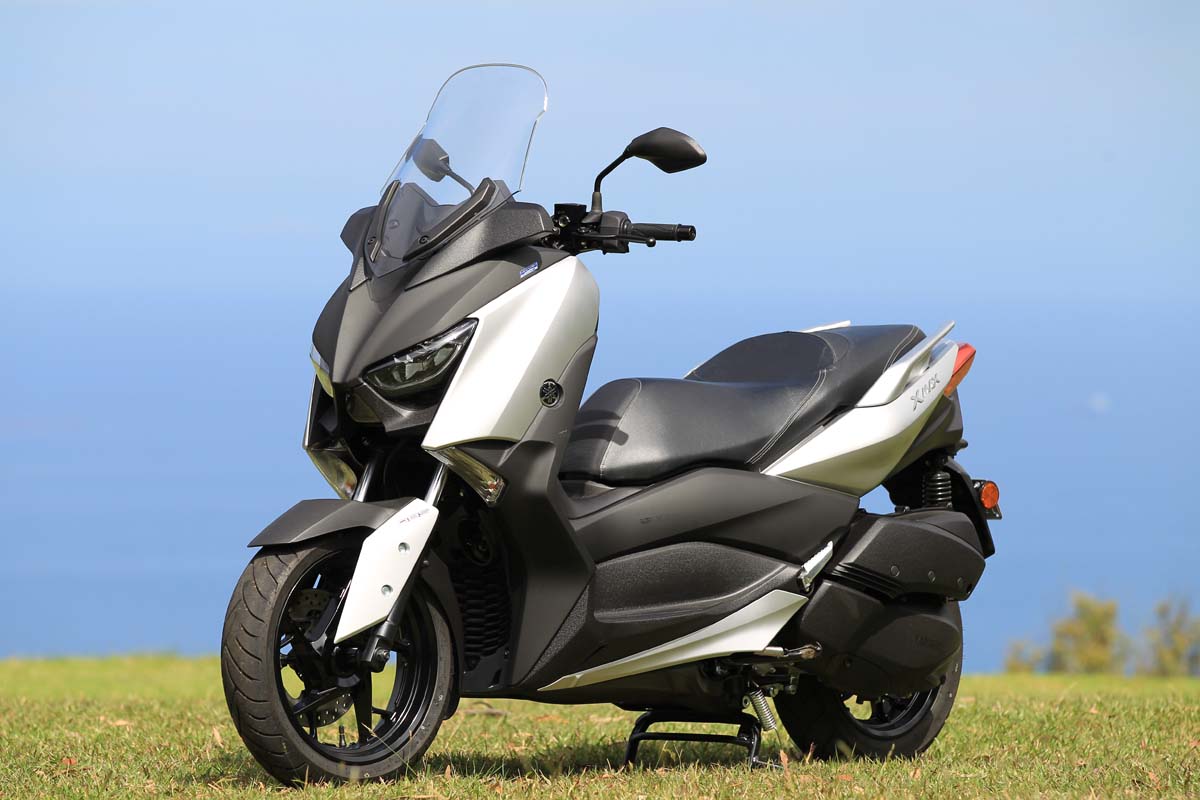 An attribute I always recommend to mates who are newbie riders is to consider a bike with a decent ABS system, as locking up the brakes seems to be a common reason for learner riders to end up on the ground.

Thanks to an El Nino weather cycle, I endured a month of rainy city commutes during my time with the XMAX 300, but its ABS system worked a charm in the wet. There were no issues bringing me to a halt safely and no shudders or lock ups, either. 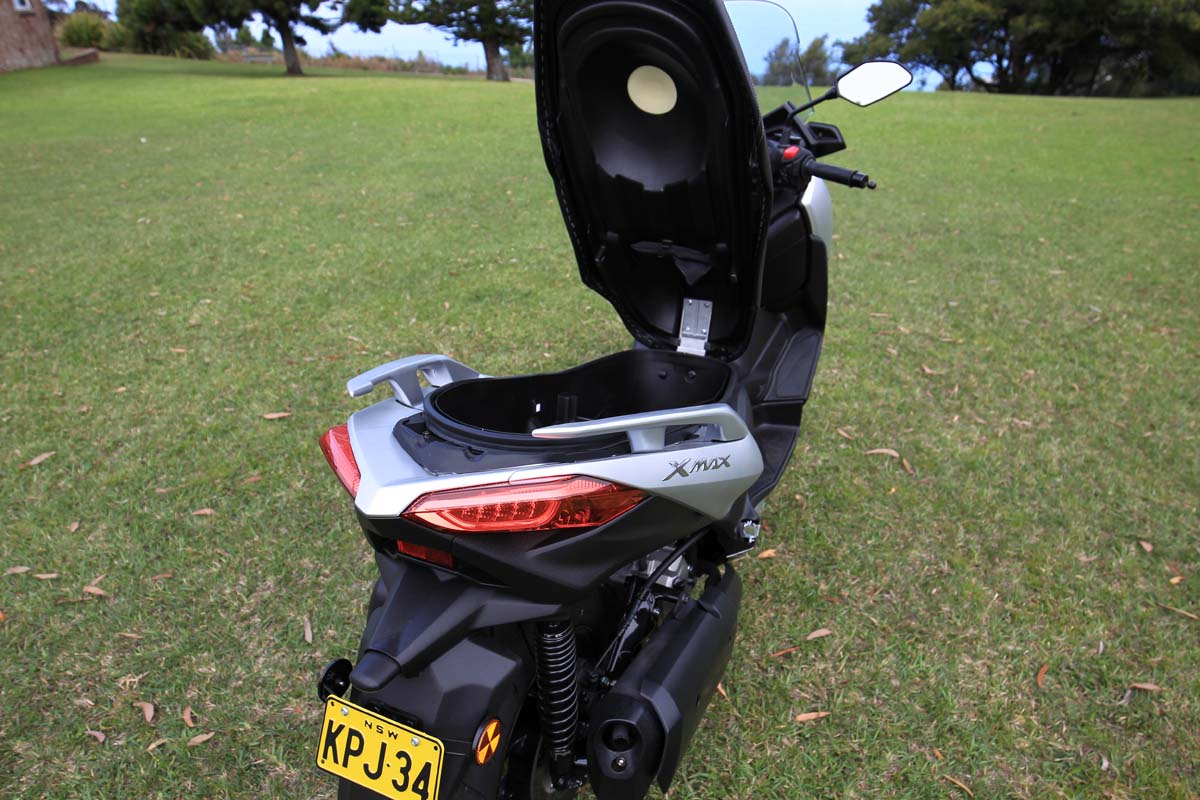 I was surprised at Yamaha’s use of a single front disc instead of a twin setup. With a kerb weight of 179kg, the XMAX is not a superlight machine, but thankfully, the 267mm disc with a twin piston caliper makes up for the lack of a second disc. The rear is a 245mm disc, which works quite well, too, but experienced riders may feel that the brakes are lacking slightly.

The XMAX 300 features a relatively simple technology set, with traction control and the aforementioned ABS the only rider assistance features.

Instrumentation is made up of a black and white LCD dash, flanked by large analogue speedo and tacho dials. The LCD screen carries basic info, like a clock, fuel level and engine temp, with additional display information – like odometer, average speed, fuel economy and tripmeter – selectable via switchgear buttons.

It all works fine, but in order to keep up with some other modern-day scooters, manufacturers need to consider offering rider aids such as navigation and phone connectivity. After all, the XMAX 300 is meant to be an urban transporter and is marketed as an alternative to public transport. Additionally, with the enormous growth in the delivery eats industry, up-to-date navigation technology will be key for those making that big purchase. Such tech is available on other scooter brands, like Kymco, so it’s a little surprising that Yamaha doesn’t have it. 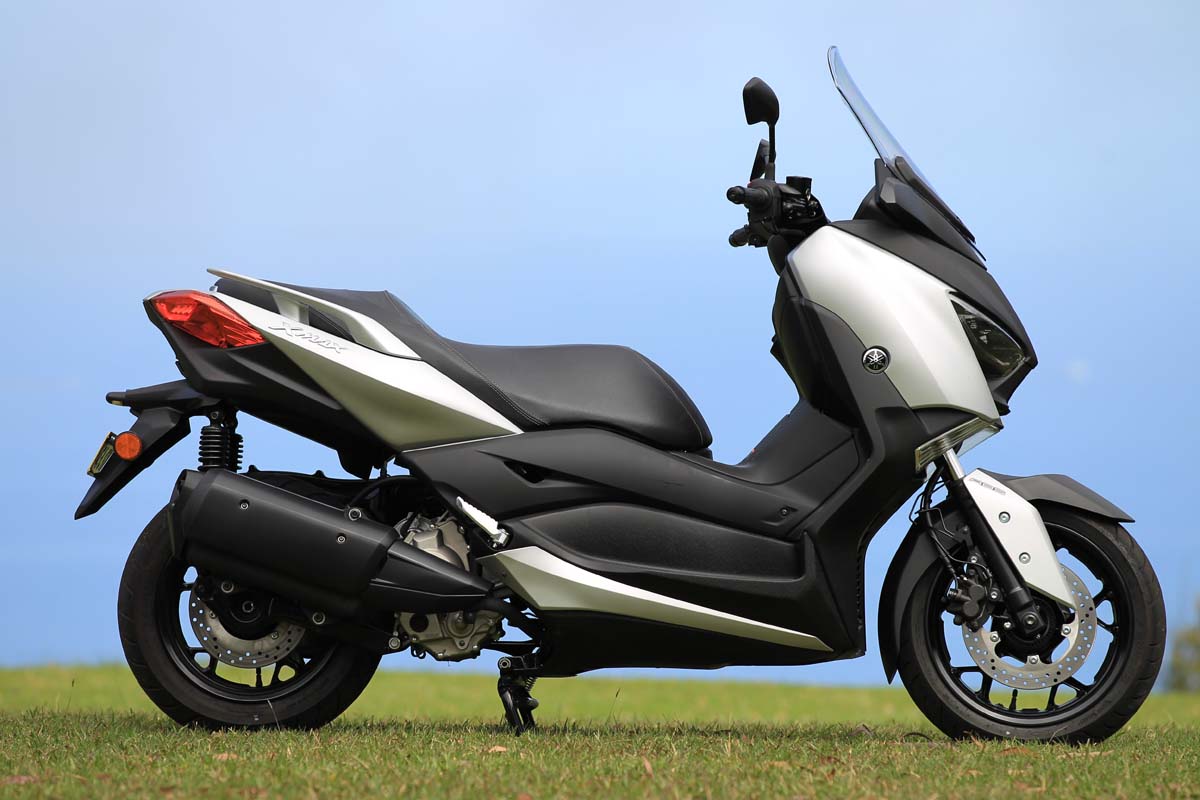 The XMAX does have a 12V outlet located in the left front glovebox, so there’s the provision to use your smartphone for navigation, but you’ll need to add a bracket to hold your phone.

There’s a smart key for keyless starting and unlocking of the under seat storage, which is slightly terrifying for someone like me who can’t remember where they put their wallet half the time. I know it somewhat defeats the point of having a keyless system, but somewhere for the key to sit flush on the scooter would be nice, so I would know where it is and not have to panic about whether I’ve lost it or not!

Quality – at a Price

All in all, the 2020 XMAX 300 turned out to be a great little commuter. There’s not much I can fault it on, apart from being slightly behind the times in the suspension and technology department. It makes up for it with typical Yamaha build quality and that zippy Blue Core engine.

It should be noted that the 2019 XMAX 300 was $6,999 plus on-road costs and the 2020 XMAX 300, which is the same machine, is $8,899 ride away. Even adding on-road costs to the MY19 bike, the MY20 version is a step up by several hundred dollars, so it’s a tough one when you consider there are other great bikes on the market for the same price or less. But, if you want a scooter that you know will be reliable, you can’t go past the Yamaha badge.

The 2020 Yamaha XMAX 300 is available now, in matt grey or matt black, and comes with a 24-month, unlimited kilometre warranty.