Dubbed the “Purple Queen”, this custom Harley Sportster was the perfect ride for a princess 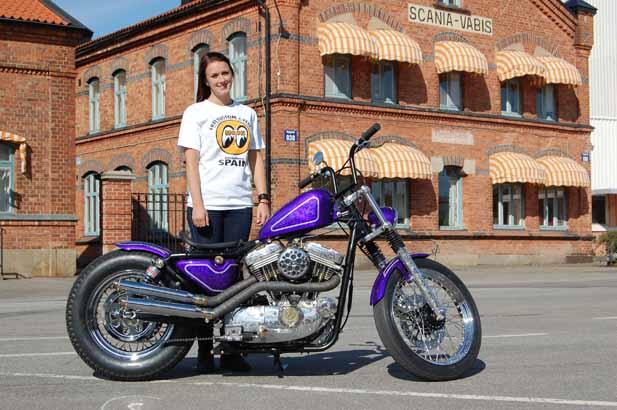 We’ve featured the builds of Peter Ström previously, including a trike for Peter’s wife Febe that was made to suit her special riding needs. The creation featured here is another Ström family affair, built by Peter for his stepdaughter, Janine.

All of Peter’s bikes are heavily customised and built to a high-standard, but this one is arguably his most eye-catching creation yet. 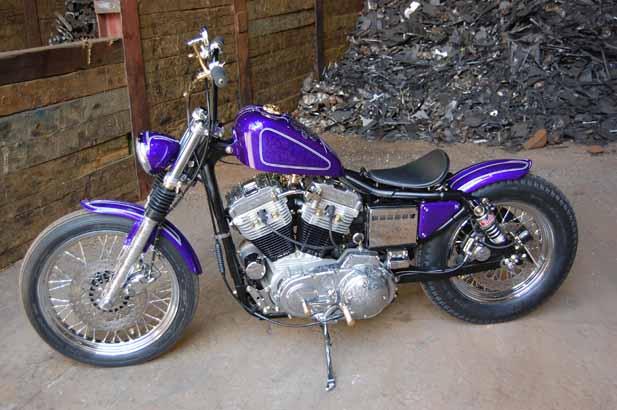 Back in 2011, Janine told Peter she wanted to join him and her mum in the short Swedish summer riding season. At the time, Janine was 22 and had only just gained her motorcycle licence. Despite having little experience with motorcycles, Janine not only knew she wanted to ride, but knew WHAT she wanted to ride – a custom bike built by her stepdad.

“The only thing she insisted on was purple paint and there had to be a crown somewhere,” Peter laughed.

That brief was simple enough, but Peter’s builds are rarely executed simply, and this one would be no exception.

A look through Peter’s previous builds meant the bike to be created for Janine was always going to be a Harley-Davidson – that was non-negotiable! As this bike was going to be ridden by a novice rider, something like a big, heavy Electraglide tourer wouldn’t be suitable, nor would a low-slung V-Rod with bags of power, or a chopper with a crazy rake.

If Peter was building the bike today, a Street 500 would be the logical choice, but we’re talking 2011 – two years before the Street was even introduced – so Peter eventually settled on a Sportster 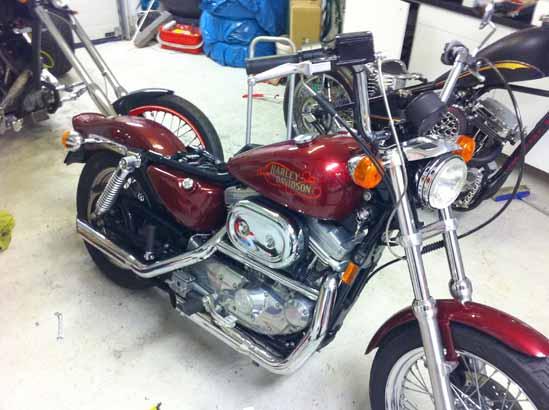 With the model decided, Peter sourced a 1995 Sportster 883 in remarkably good and almost completely stock condition.

Golden Ball retained a mostly stock frame, drivetrain, brakes and suspension, but added a slimline solo saddle and a bunch of ‘70s-style chopper touches, like a chain-drive conversion, old-school oil tank, headlight, tail light, grips and engine dress-up parts, as well as rich gold metalflake paint on the tank and rear mudguard. The front guard, instrument pod and a few other items were deleted, with a disc rear wheel added for something different.

While Janine’s Sportster would be inspired by Golden Ball, it certainly wouldn’t be a clone of it, with plenty of specific touches added that Peter described as feminine.

“Janine is quite ‘girly’, so when I started to build this bike for her, I kept that in mind,” Peter explained.

One of those feminine touches would be ornate floral engravings applied to various parts of the bike, with those patterns later incorporated into painted sections on the tinware.

Peter’s pretty skilled in most areas of bike building, but he leaves this sort of specialist work to a professional, in this case a master engraver by the name of Andrea Gallinaro. Located in Padua, Italy, Gallinaro came to Peter’s attention through similar work he’d done on custom bikes in the past. The quality of that work convinced Peter he was the right man for this job.

Once the bike was completely stripped down, the engine covers, rocker covers, fork legs and triple trees were all sent to Gallinaro for highly-detailed engraving and polishing, while Peter and his mate, Kenta Falkered of Ace Performance in Stockholm, would get stuck into the fabrication and rebuild.

The Parts Stop, also located in Stockholm, would be Peter’s source for most of the custom parts added to the bike. 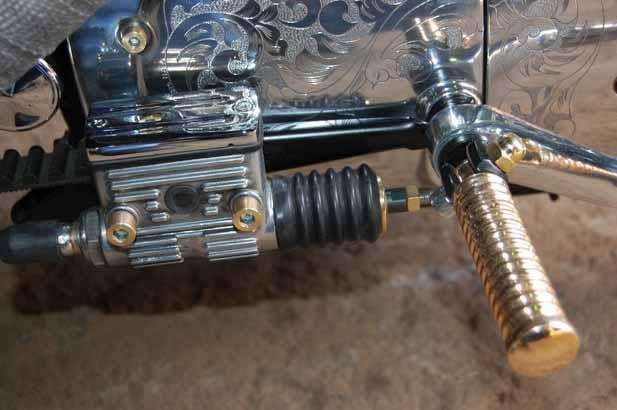 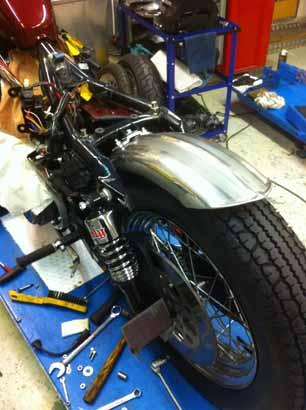 Frame Up, Wheel Out, Hang On

Once the Sportster was completely disassembled, the old school look for the rebuild started with relocating the ignition from the offside headstem to nearside battery box. That meant some modifications to the frame, but nothing too radical, mainly confined to adding reinforcing sections where required, smoothing off areas like the front downtubes and removing the frame extensions for the rear mudguard and indicators.

“I welded on new mounts for the turn signals and rear fender, raised the mounting point for the fuel tank and made a bracket for the relocated ignition switch,” Peter explained. “I also made up all new brackets for a custom solo saddle. After that, the frame was powder coated in satin black.”

The wheels were tackled next, with the stock hubs rebuilt and powder coated black. The rims are stock, too, but highly polished. When it came to relacing the wheels, Peter chose custom spokes in the ‘candy twist’ style seen on some custom springer front ends, to add a bit of bling and co-ordinate with other cosmetic touches that were coming. Brass nipples were added for the same reason, with custom valve caps meeting Janine’s ‘crown’ requirement for the build. The old school look was enhanced with Avon Speed Master rubber fitted at both ends.

Aftermarket brake discs, chromed calipers, customcables and master cylinders were next, followed by the suspension. Peter chose a Burly lowering kit that drops the front end by one and a quarter inches, while Burly Slammer rear shocks drop the back end by two inches. Judicious use of brass fittings and fasteners here keeps the colour palette of this build going, while the rubber fork gaiters do the same for its old school vibe.

The handlebar the Sportster came with was replaced with a Biltwell ‘Frisco’ bar that has a similar shape and reach, but Peter welded on new risers for a cleaner look and ran the throttle cable internally for the same reason.

Also helping to keep the front end clean is the use of micro switches fitted in place of bulky switchblocks and replacing the factory instrument pod with a compact Motoscope digital display that’s relocated to the nearside and mounted on a custom bracket between the cylinder barrels. 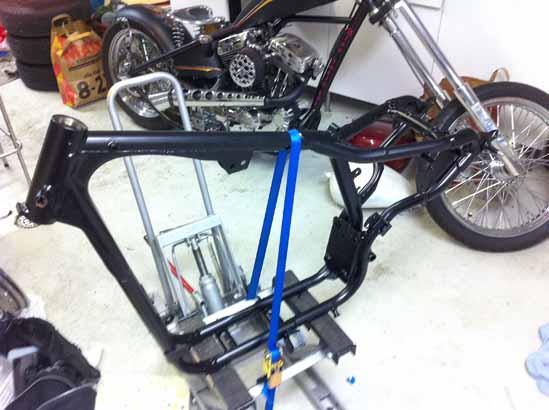 The brass detailing on the wheels and suspension was carried over to the Sportster’s v-twin engine, with brass fasteners used throughout: “I tried to find as many brass parts as possible,” Peter laughed, “but I think it has been a good combination.”

An Indian Larry points cover was fitted and a brass-finished custom carby from Lowbrow Customs added. Topping this is a Stage 1 ‘Big Sucker’ air filter and ‘Holey Drilled’ chrome cover.

For the exhaust, Peter and Kenta made up the headers from scratch, added header wrap for the old school look, then capped the pipes with trumpet silencers and exhaust tips that also came from Lowbrow Customs.

By the time Peter and Kenta were ready to reassemble the engine, the engraved and polished parts had come back from Italy and looked amazing, especially against the black powder coated cylinder barrels. Peter describes these finely-detailed elements as his favourite parts of this build and they certainly make this Sportster stand out.

For all its external changes, the Sportster’s 54ci engine was untouched internally. Pistons, rods, heads and cams are all stock, which makes sense as this bike was built to be ridden - by an amateur. 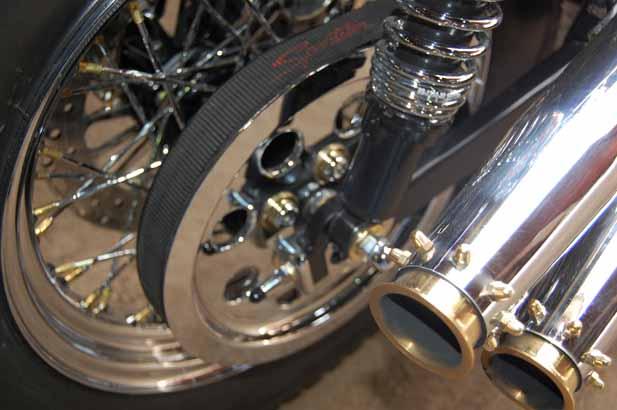 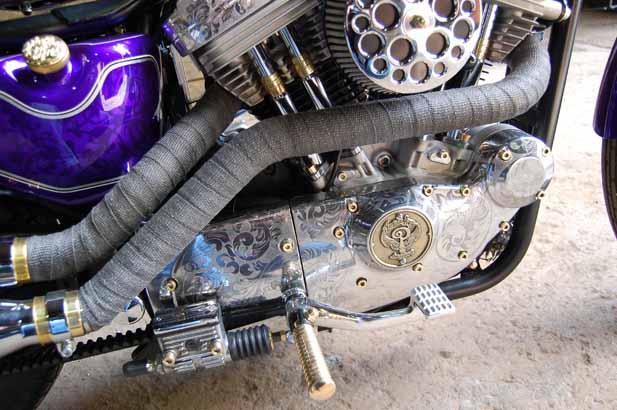 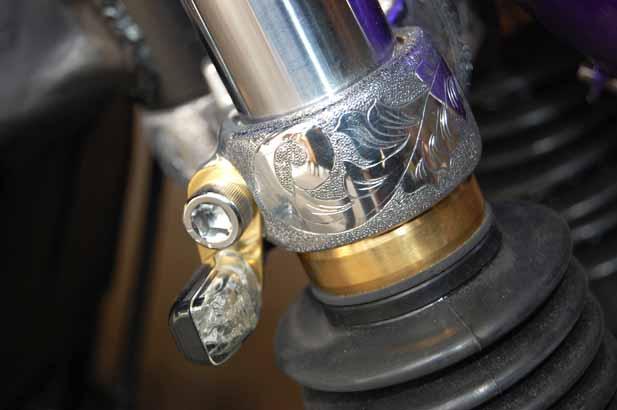 For Janine’s other requirement for her bike - purple paint - Peter called on past collaborator Daniel Fahlström of Airbrush Studio Stockholm. Daniel has painted bikes, cars, trucks and even large murals in the past, as well as finely detailed work like this job.

The deep, rich purple that Daniel mixed carries a fine metalflake that’s only apparent up close, while the ‘panel’ treatment carries white and silver coachlines with a larger, more obvious flake.

Darker purple floral detailing in these panels - on the tank, headlight shell and the tops of the ribbed mudguards - pick up on the engraving detail, while hand-painted pinstriping keeps the old-school theme going.

By this stage, the Sportster had acquired the name ‘Purple Queen’, so that was added in a custom style script to the tank and enhanced with gold leaf. 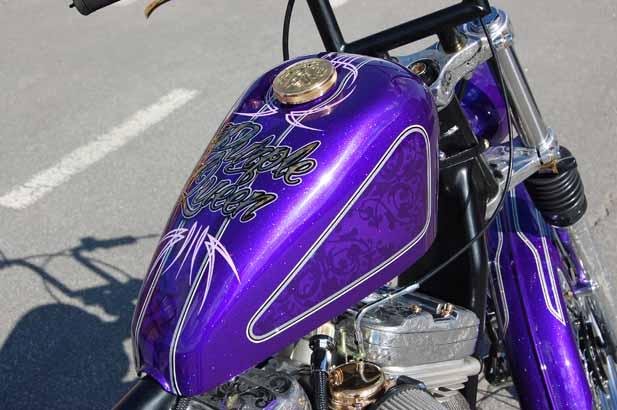 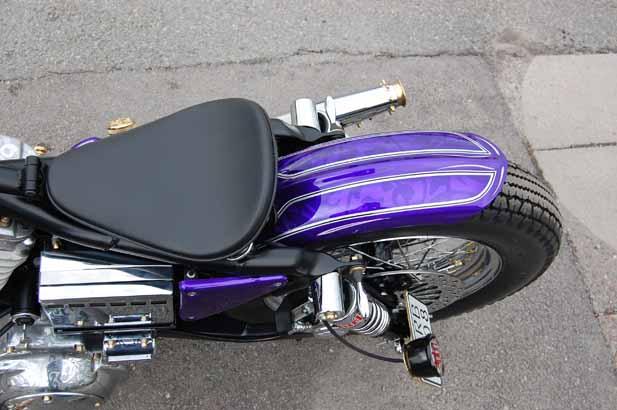 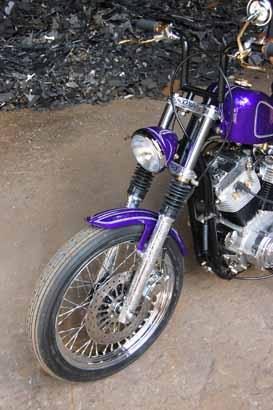 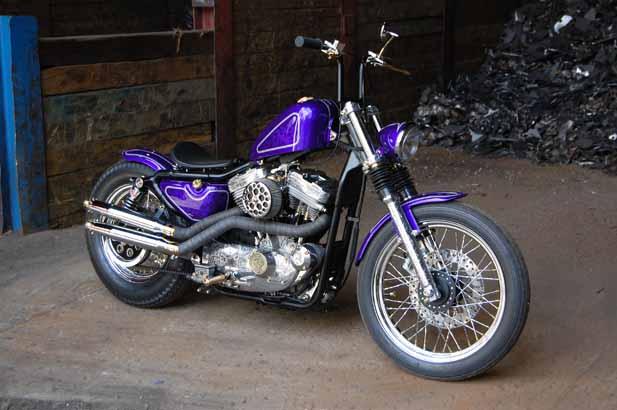 Queen for a Princess

As this build neared completion at the end of 2011, finishing touches included things like the Biltwell ‘Kung Fu’ grips and Kustom Tech levers. Hippy Killer pegs and pedals with a brass finish were also added, along with a retro tail light, side-mount licence plate holder and Kellerman micro 1000 LED indicators. Custom brass caps for the fuel and oil tanks were sourced from Speed Dealer Customs.

Six months of solid work saw the Purple Queen completed in March, 2012, and it should come as no surprise that Janine loved the finished article. For his part, Peter was proud of the fact he was able to build a beautiful bobber from a stock Sportster. With its combination of engraved, polished and brass parts, as well as that striking purple paint, the Purple Queen is undeniably beautiful - fitting for a Swedish beauty like Janine.

At the same time he and Kenta were building the Purple Queen, Peter was working on updates to his wife Febe’s custom trike, completing both projects in time for the family to go riding and hit the Swedish bike shows that summer.

“With her own licence and bike, Janine was able to join us on the roads and at bike shows a lot,” Peter said.

The Purple Queen picked up numerous trophies at those shows, too. More importantly for Janine, the bike was a great sidekick for her daily life, being easy to operate, smooth to ride and, of course, looking great.

After six years’ enjoyment, Janine was keen to move on to something bigger and more powerful, so put the Purple Queen on the market in late 2018 and eventually sold it to a family friend. She hasn’t lost the riding bug, though, replacing the Sportster with a Buell XB9R – which had to be purple, so Peter duly obliged with a respray!

From a simple brief of ‘purple with a crown somewhere’, Peter went above and beyond with the Purple Queen. You could say he gave this custom the “royal” treatment! 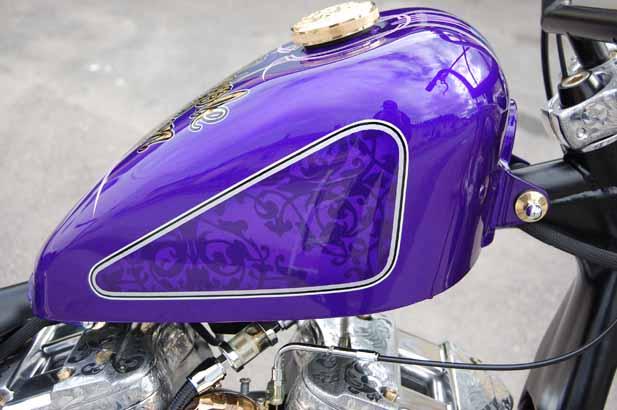 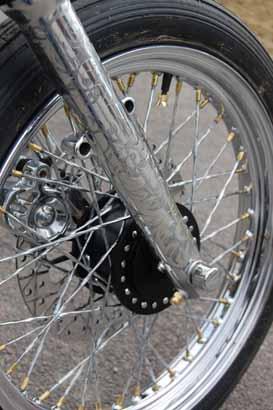 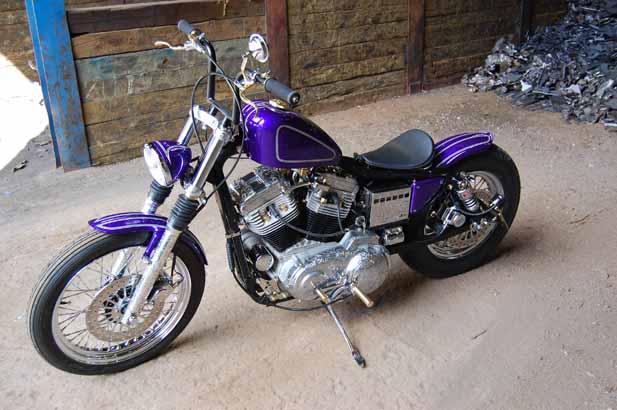 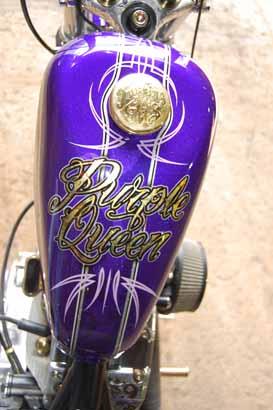 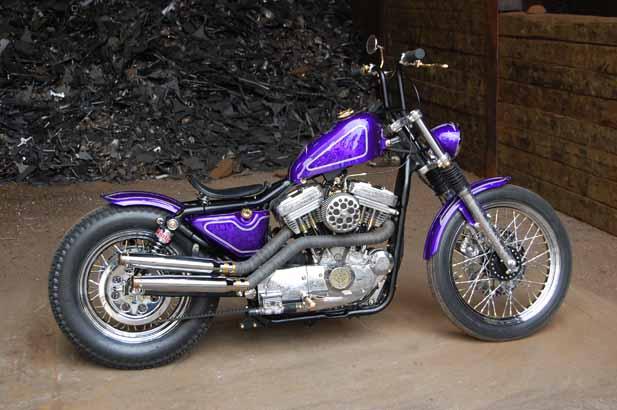 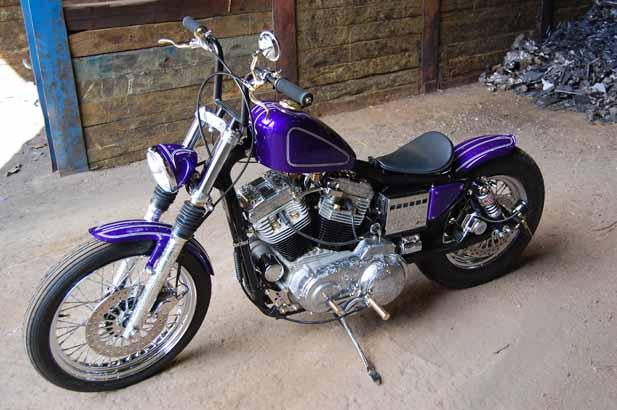