A new champion has been crowned in the FIM MotoGP World Championship, with Fabio Quartararo wrapping up the title at the Misano II round on 24 October. 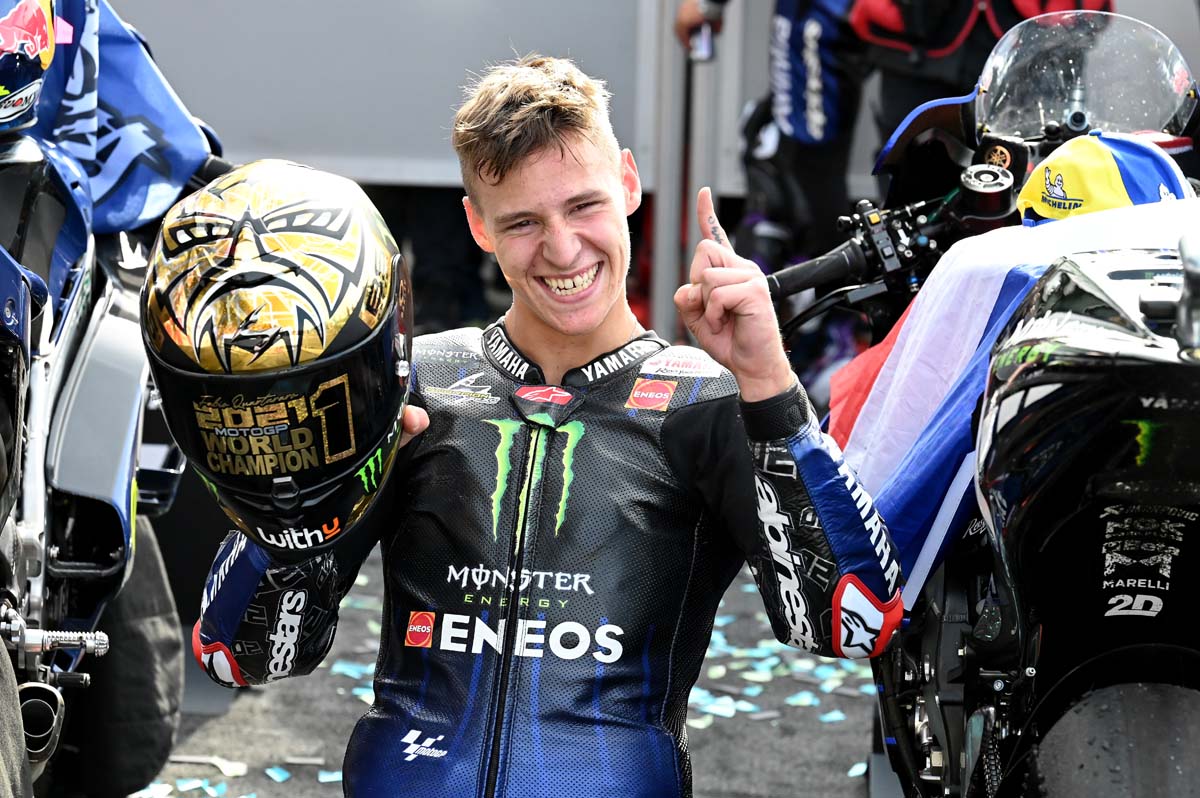 In a dramatic race, Quartararo overcame his worst ever qualifying result in MotoGP to cut through the field and finish in fourth place. That, along with his main title rival crashing out while leading, was enough for the Frenchman to secure the 2021 MotoGP title with two rounds remaining. 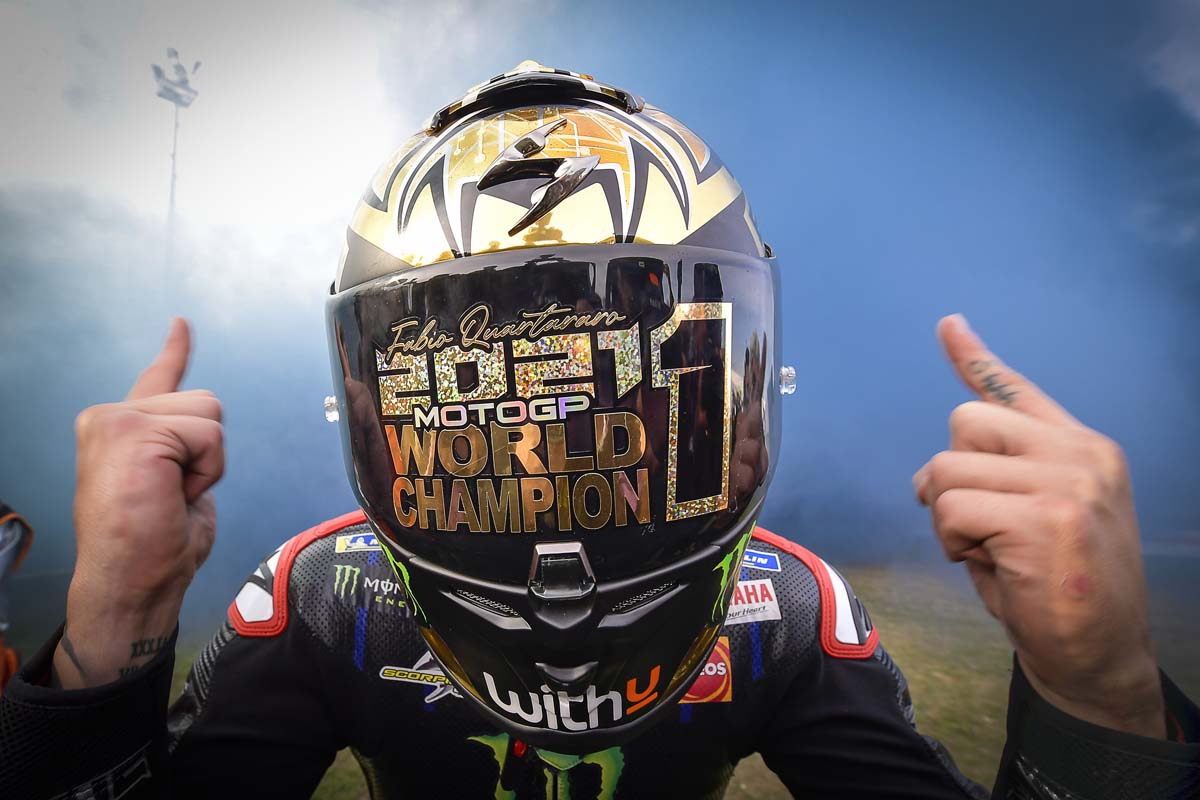 “When I crossed the finish line, I thought about all the tough moments I had, and to be World Champion in MotoGP is something I never expected when I was in bad situations only a few years ago,” the young Frenchman explained.

“I've cried a lot and screamed a lot! It feels amazing. I feel like I'm in a dream and I don't realise what's happening to me right now!” 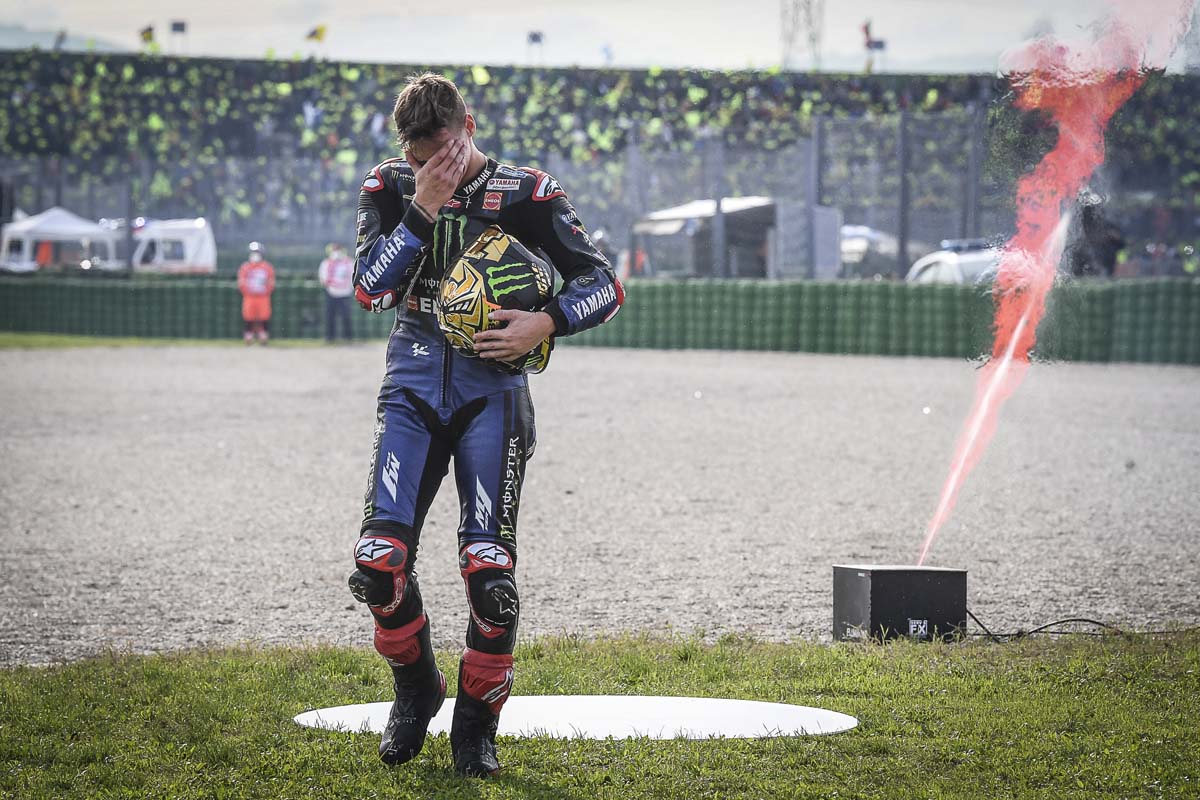 The “bad situation” Quartararo referred to were struggles dealing with the pressure of MotoGP competition that saw him turn to sports psychologist, Dr. Tom Ferraro, last year.

"Just before starting the [Misano II] race, I was with Tom in the office and feeling stressed. He said, 'just think about the last three races you had last year'. They were a total disaster and I just wanted to finish the Championship whatever the position was.

“I think everything that happened last year helped me a lot to win the title. Thanks to the people for supporting me in these tough moments, I think I learned a lot during these years in MotoGP and still have a lot to learn to achieve more results like that.” 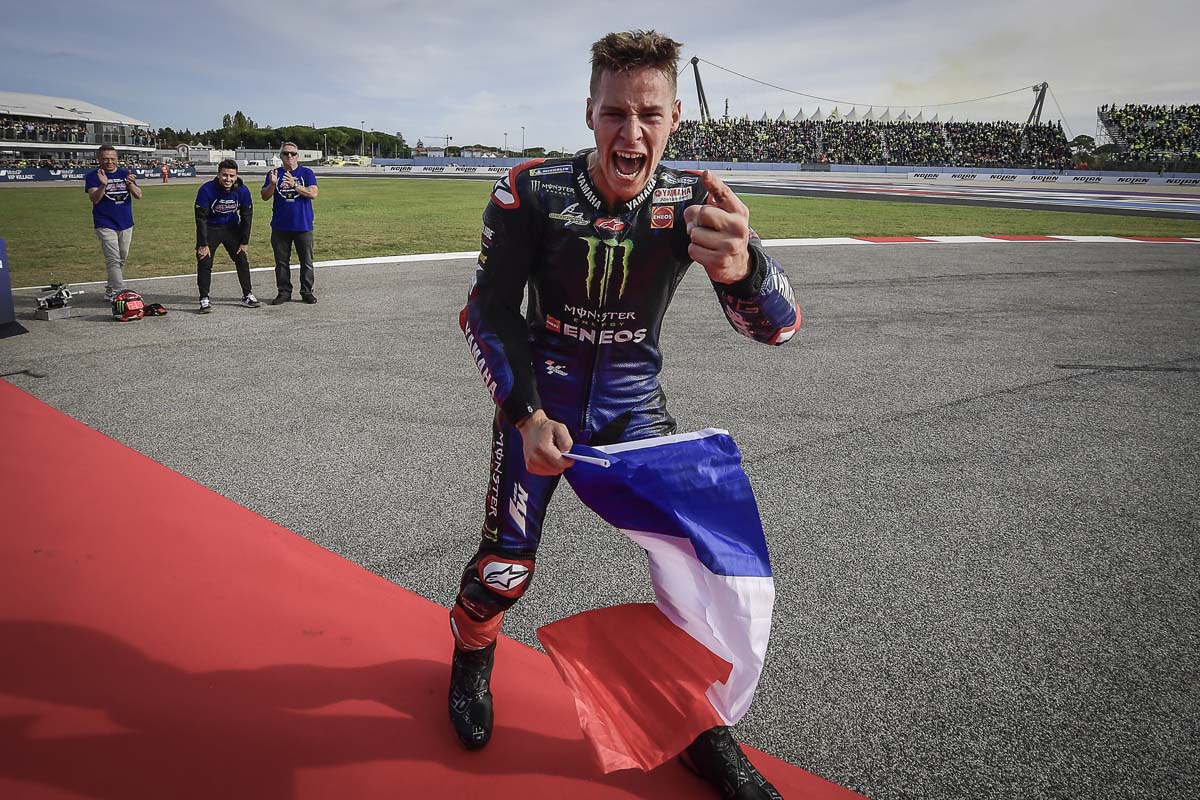 A First for France

Quartararo becomes the first Frenchman to claim a premier class title in FIM grand prix history and Yamaha’s first MotoGP champion since 2015. Quartararo claimed the championship in only his third year in MotoGP, two of which were spent with the satellite Petronas Yamaha SRT outfit before moving up to the factory Monster Energy Yamaha MotoGP team this year.

The Frenchman’s results on the YZR-M1 this year – five wins and five other podiums at time of writing – are all the more remarkable given the performance of his team mate, Maverick Vinales, on the same machine. After seeming like the heir apparent to Rossi and Lorenzo at Yamaha, Vinales’s 2021 season saw him implode dramatically and sever all ties with Yamaha in August. 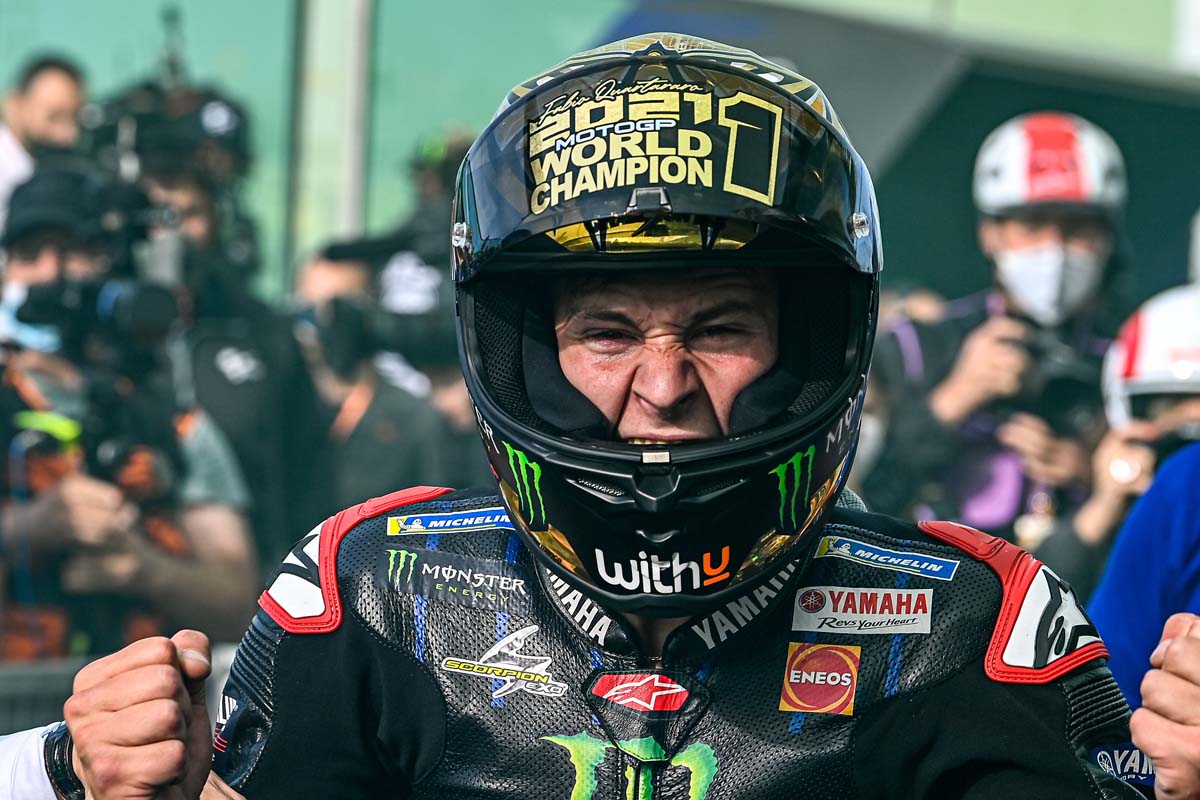 For Quartararo, winning the premier class world championship without taking a title in any of the junior categories sees the 22-year-old from Nice join some illustrious company that includes Nicky Hayden and Casey Stoner in the MotoGP era, as well as the likes of Wayne Rainey, Kevin Schwantz, Wayne Gardner, Mick Doohan, Kenny Roberts Jr (and Sr) and Barry Sheene, to name a few. 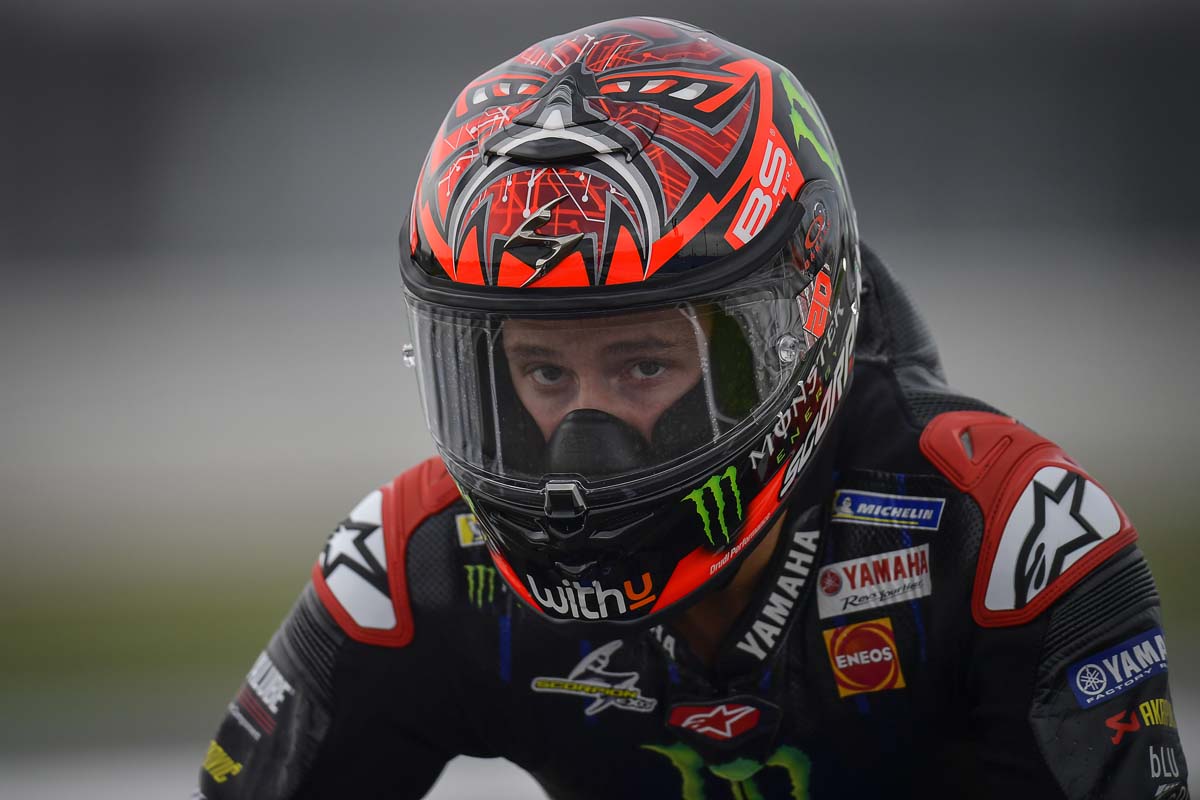 The Road to the Title

Like most of the current crop of MotoGP riders, Quartararo started young, getting a Yamaha PW50 at four years old from his father, Étienne Quartararo, a former French 125cc Champion.

Progressing through 50cc, 70cc and 80cc titles in Italy and Spain, Quartararo won the Spanish Moto3 Championship in 2013 at 14 years of age – the youngest rider to do so – then backed it up with a second Spanish title in 2014.

Those results saw Quartararo secure a Moto3 ride with Estrella Galicia 0,0 Honda in 2015, where he was up against future MotoGP rivals like Miguel Oliveira, Jorge Martin and Enea Bastianini.

Finishing seventh in his Moto3 debut race, Quartararo took a podium at the next round and would add another before injury blunted his campaign, leaving him in tenth place overall. 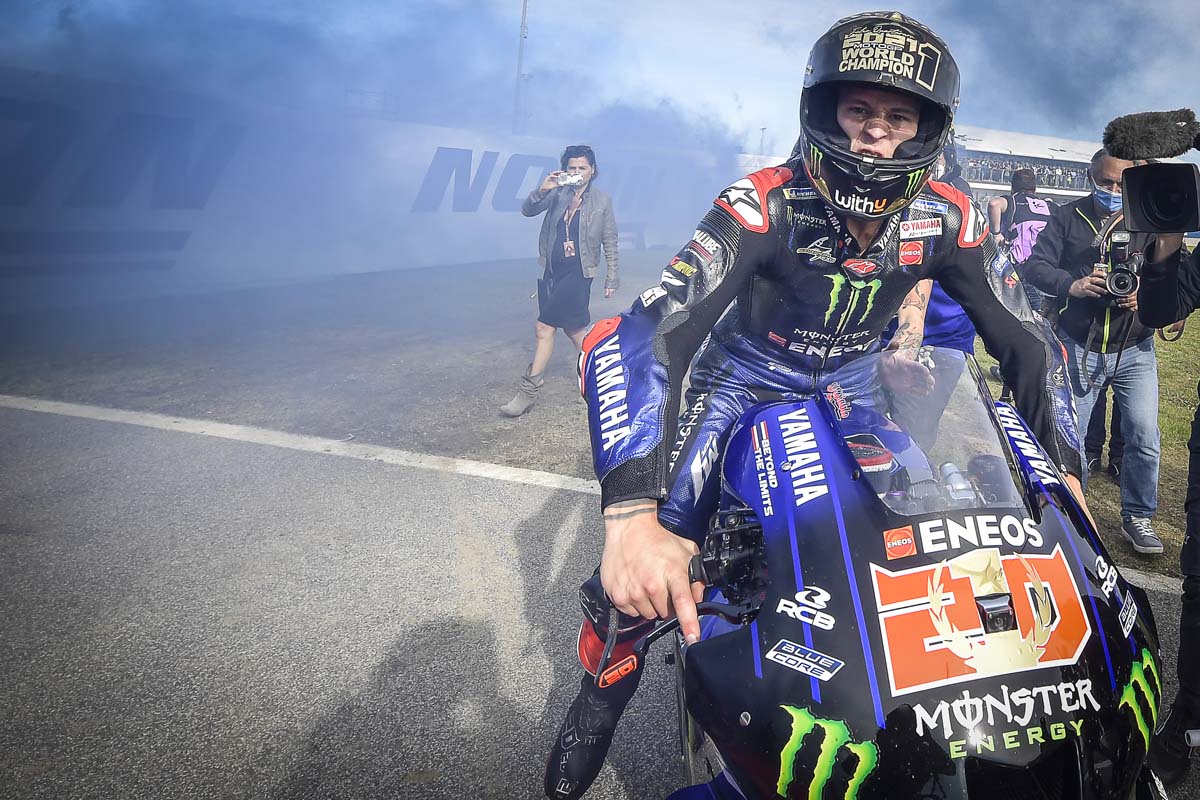 For 2016, Quartararo joined the Leopard Racing squad alongside Joan Mir and Andrea Locatelli, but struggled to adapt to the KTM, finishing the season in thirteenth place with a best race result of fourth.

Despite this, Quartararo’s potential saw him progress to Moto2 with the Pons HP40 team in 2017. After another season without a podium, the Frenchman parted ways with Pons and moved to Ego/HDR – Speed Up Racing for the 2018 Moto2 season, where his first Moto2 pole and breakthrough race win finally came at Catalunya, followed by a runner-up finish at Assen. They would be the only times Quartararo greeted the podium that year, though, and while a string of Top 10 results followed, the Frenchman finished his second Moto2 season tenth overall. 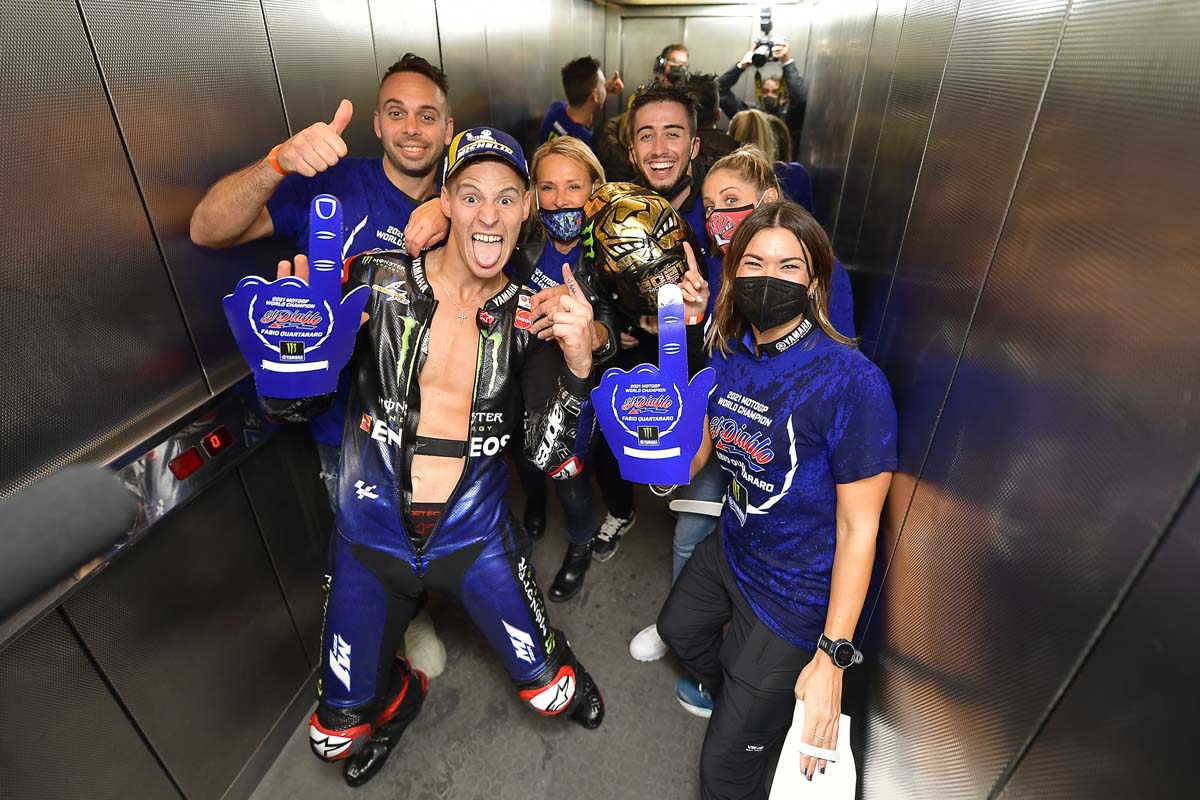 By this time, the 19-year-old known as ‘El Diablo’ (The Devil), had attracted the attention of MotoGP teams and would sign with Petronas Yamaha SRT for the 2019 MotoGP season.

Lining up alongside Franco Morbidelli in the Yamaha satellite outfit, Quartararo’s MotoGP debut was less than impressive – 16th at Losail – but he soon found his groove and was inside the Top 10 regularly before taking his first podium at Catalunya, then six more, outperforming his team mate, as well as the likes of Valentino Rossi, Danilo Petrucci and other riders on factory machinery. 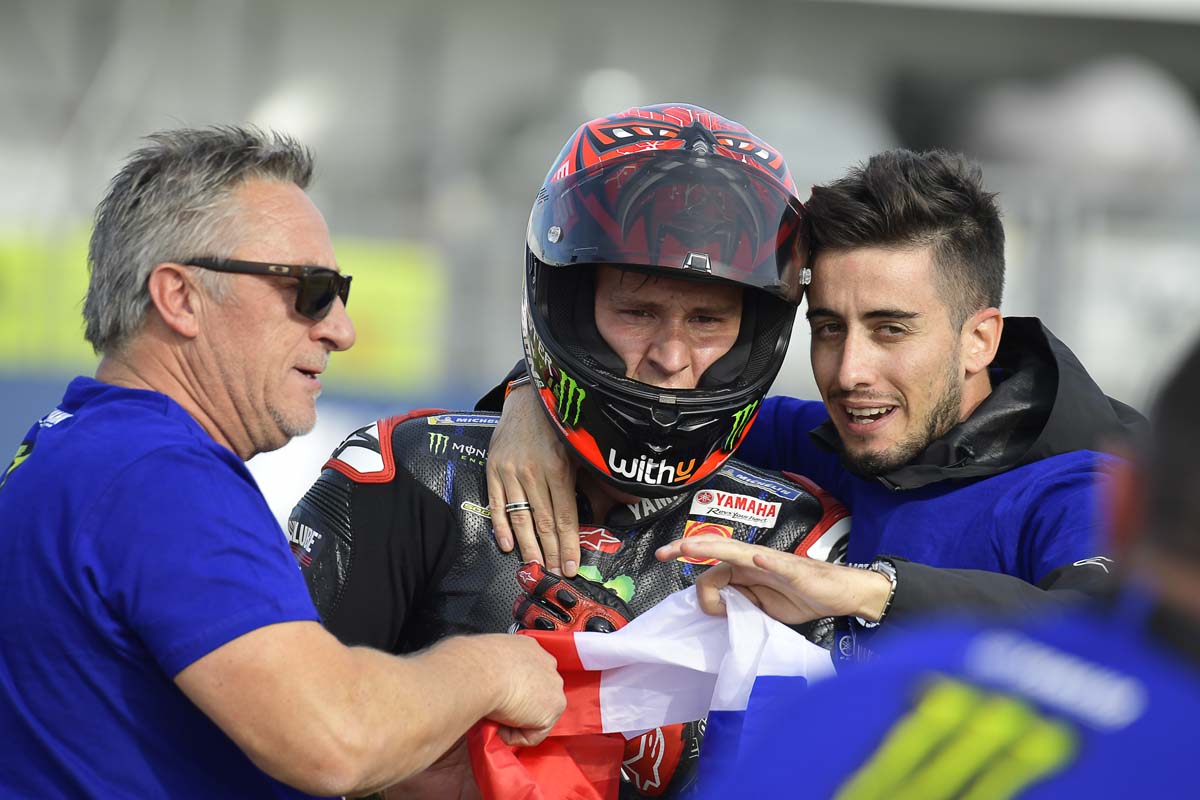 While he came desperately close to taking a race win on several occasions in his debut MotoGP season, Quartararo would be denied but took some consolation from the Rookie of the Year award, the top Independent Team rider and fifth overall in the 2019 championship.

Remaining with Petronas Yamaha SRT for 2020, Quartararo bolted from the blocks when the MotoGP season finally got underway in June, taking back-to-back wins at Jerez, but the pressure of expectation was telling on the Frenchman and he would take only one more victory that year, finishing the COVID-comprised season in eighth place. 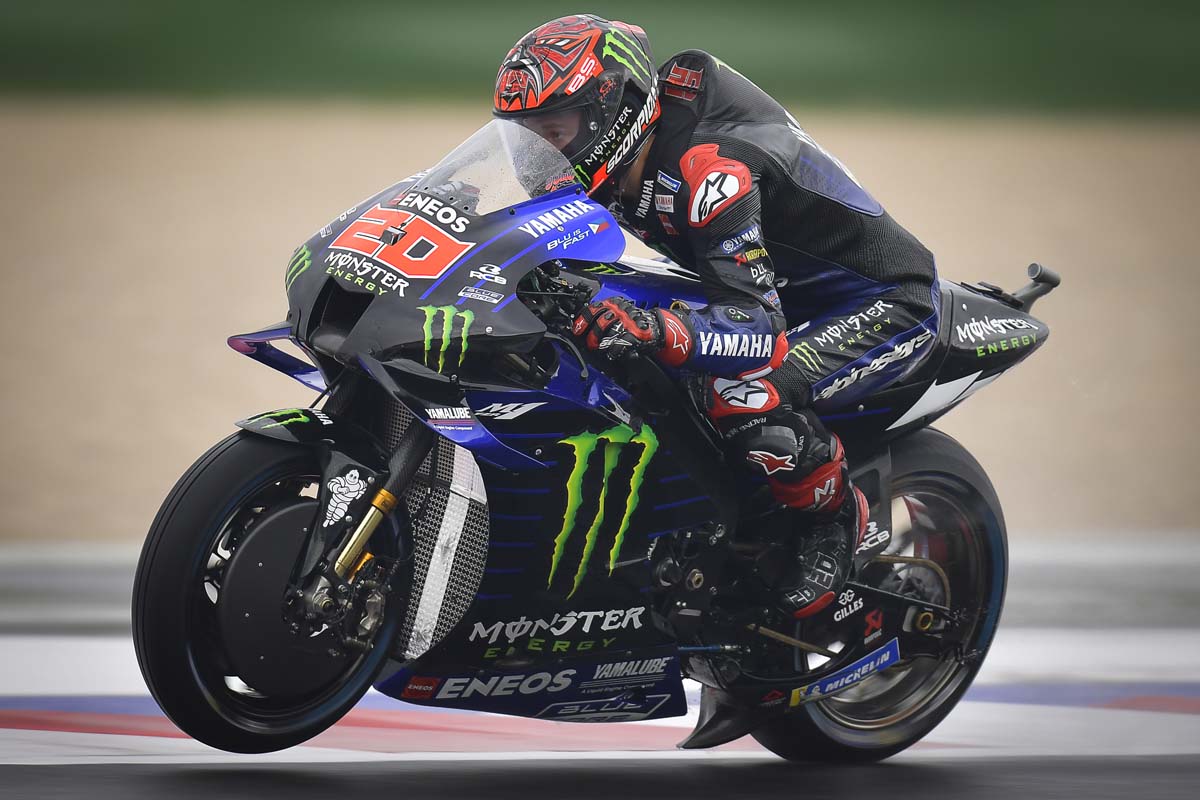 In the off-season, and with a step up to the factory Monster Energy Yamaha MotoGP team locked in, Quartararo intensified his work with sports psychologist Dr. Tom Ferraro to ensure he approached the 2021 season both calmer and able to better communicate with his team.

That work, which has been ongoing, paid off early with wins at Losail and Portimao before arm pump denied him another win at Jerez. Surgery to address that compromised Quartararo’s performance at Le Mans, but he bounced back at Mugello to take another win before the infamous “zippergate” incident at Catalunya.

Race wins at Assen and Silverstone saw Quartararo enter the Aragon round with a 65-point championship lead, but he left that round with the margin cut to 53 points and a new championship rival in Ducati Lenovo Team’s Francesco Bagnaia. 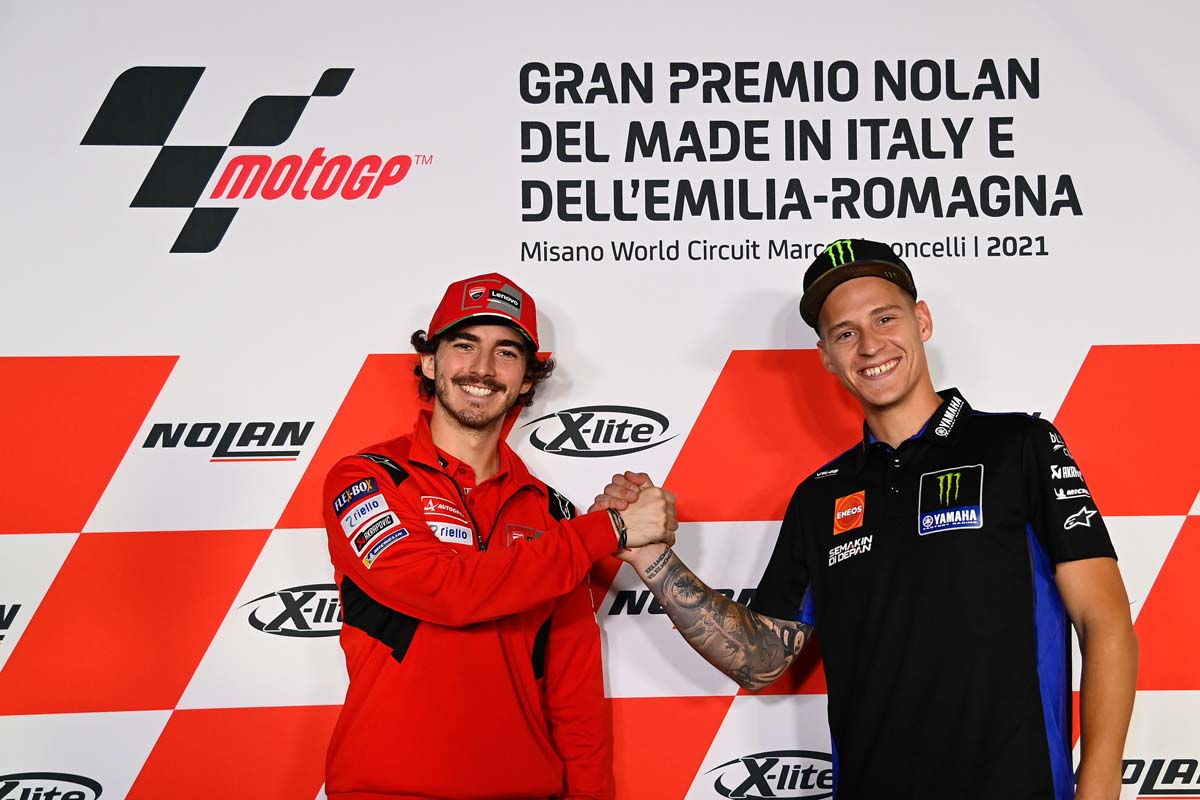 Podiums at the first of two Misano rounds and the Circuit of the Americas ensured Quartararo held a 52-point advantage over Bagnaia coming into the second Misano round on 24 October.

At that round, Quartararo recorded the worst qualifying result of his MotoGP career and would start from 15th on the grid, while Bagnaia was on pole. 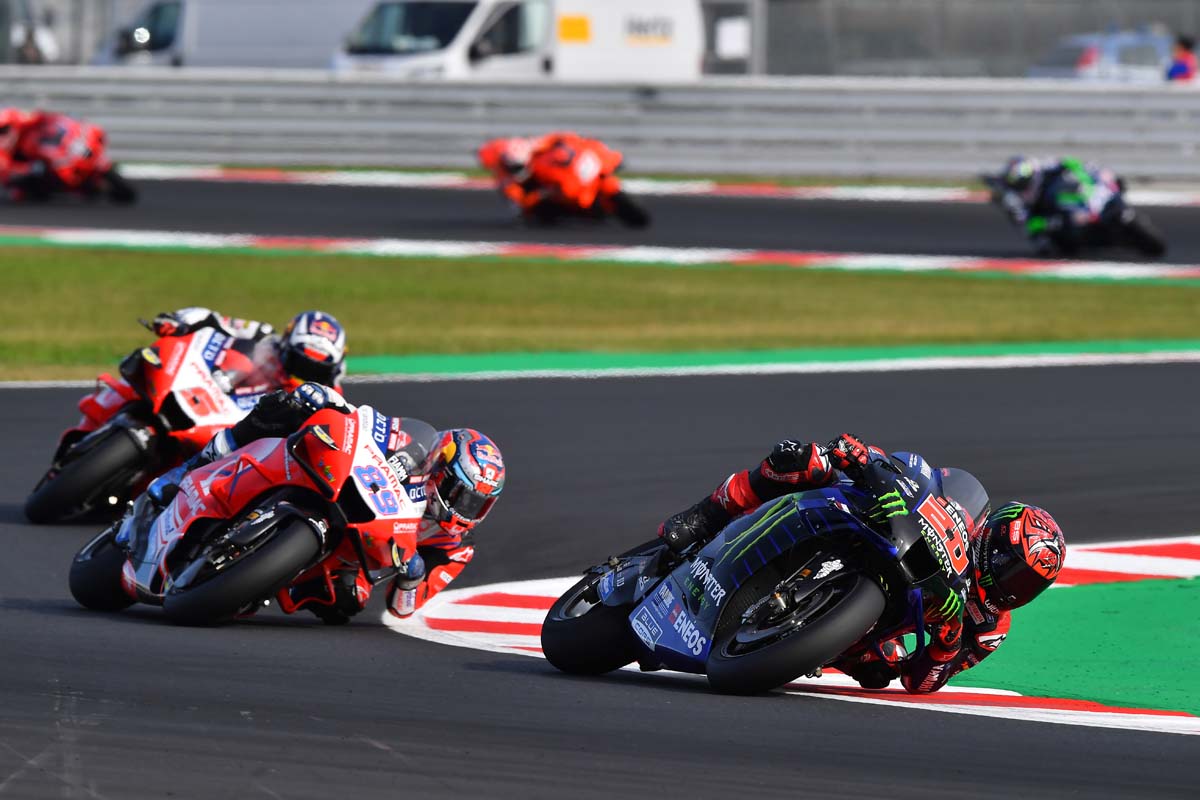 While Quartararo carved his way through the field, Bagnaia remained in front and, in the race’s closing stages, it seemed like the championship would go down to at least the penultimate round at Portimao. But, with five laps remaining and a comfortable lead, Bagnaia crashed and couldn’t restart. Quartararo battled with Enea Bastianini for third place and while he lost that battle, he won the war – fourth place guaranteed the Frenchman the 2021 MotoGP World Championship.