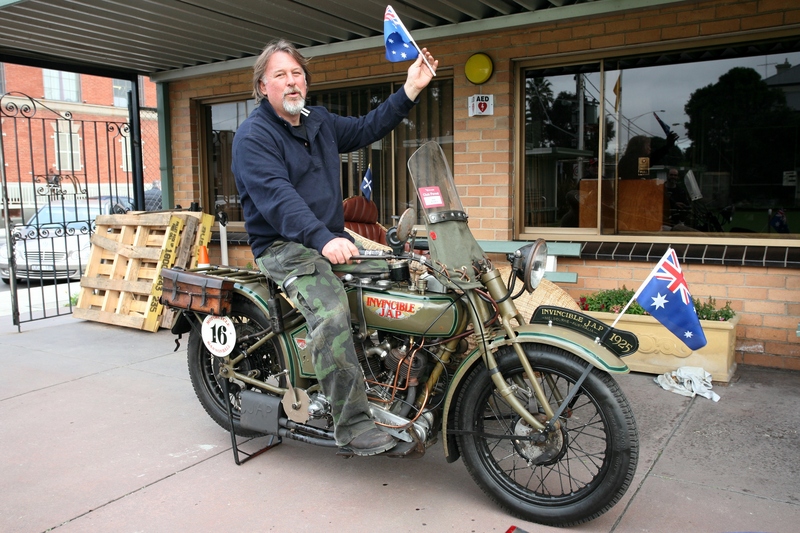 Dubbed "The Invincible Adventure," the 26 minute documentary covers the trials and tribulations Chris experienced in not only getting his bike to the USA and cleared through customs, but also competing in the gruelling event itself. By no means a race, the Motorcycle Cannonball was nonetheless a major test for both man and machine.

Chris was no exception, with his 1925 Invincible JAP sidecar outfit soon finding the limits of its C1920s (and older) technology. The credo from the original Cannonball of "wrench, ride, repeat" certainly applied to Chris, with the weak point of his outfit soon identified as the gearbox.

As previously reported, Chris abandoned the wicker sidecar early and continued on for some distance as a solo, but the Invincible JAP ultimately proved unworthy of its name and Chris was forced to withdraw.

Extremely well shot and edited, The Invincible Adventure has scored a pretty impressive coup in being accepted for the St. Kilda Film Festival.

The Invincible Adventure is scheduled to screen on Sunday, May 26, at 5:00PM. For further details and confirmation of session times, go to http://www.stkildafilmfestival.com.au/2013-s2/details/45.

For a preview, go to: http://www.youtube.com/watch?v=snSxQGpGvjM

Copies of the DVD are also available to purchase from www.wickersidecars.com